Majority of Swiss want a burqa ban, poll shows ahead of referendum in March

A clear majority of Swiss voters favour the introduction of a nationwide ban against wearing face-coverings in public, known as a ‘burqa ban’, ahead of a referendum on the issue in March.

According to a Tamedia poll of 15,000 eligible voters on Friday, a full 63 percent of those questioned said they would vote yes or were considering voting yes in an upcoming popular vote on the ban, the Tages Anzeiger daily reported.

The Swiss are set to vote on whether they want to ban face coverings in public on March 7, when they will also vote on a range of other issues as part of the country’s famous direct democratic system.

The text does not mention Muslim veils explicitly, stating only that ‘no one shall cover their face in public, nor in areas accessible to the public or in areas where services are ordinarily accessible to all.’

But the proposed ban, which has been opposed by the Swiss government, is widely seen as targeting burqas and other face-covering Muslim veils. 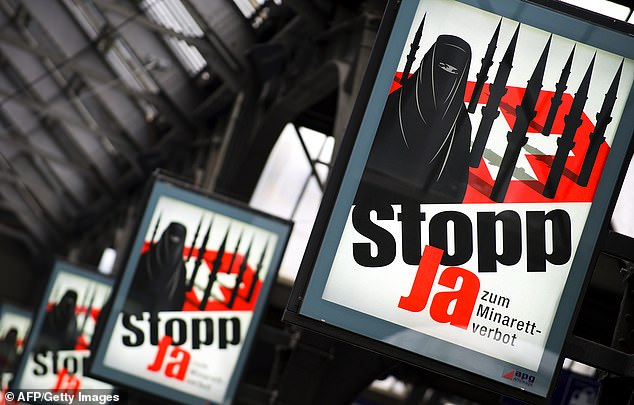 Campaign posters of the far-right Swiss People’s Party depicting a woman wearing a burqa against a background of a Swiss flag. These posters were used in 2009. Now, in 2021, a referendum is planned on March 7 that could ban face coverings in public spaces

The initiative also makes several exceptions, including in ‘places of worship’, and, vitally in these pandemic times, for ‘health reasons’.

Currently, all individuals in Switzerland are required to wear masks ‘in all areas open to the public’ and ‘all areas that can be accessed by people,’ according to the Swiss Federal Office of Public Health, because of the coronavirus pandemic.

The Egerkingen committee which presented the initiative is heavily backed by the populist right-wing Swiss People’s Party, but some left-leaning politicians have also joined the campaign in the name of protecting women’s rights.

She stressed that most women seen in the country wearing such veils are tourists.

The justice minister also insisted the issue should be left up to Switzerland’s 26 cantons.

Two cantons, Ticino and St.Gallen, have already introduced such bans, while three other cantons, Zurich, Solothurn and Glarus, have rejected doing so in recent years. 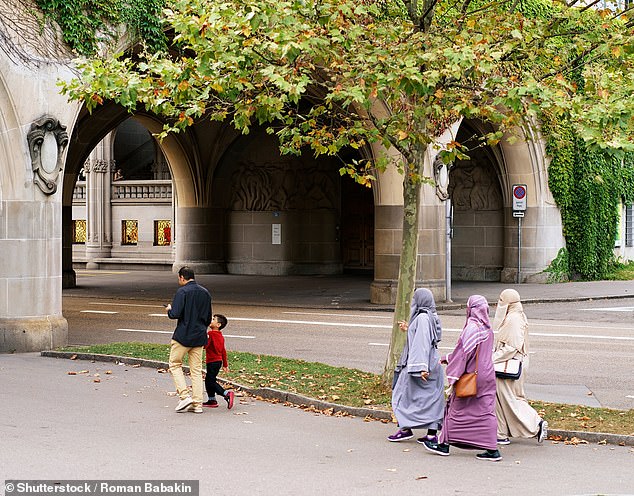 Pictured: A traditional Muslim family with husband and a child and three women in hijabs in the streets of Zurich, Switzerland

The government and parliament are backing a counter proposal, which would require people to reveal their faces to the authorities for identification purposes, for instance at borders or on public transport.

The Swiss government urged voters to reject the proposal on Tuesday, saying it could deter tourists and ‘be unhelpful for certain groups of women’, Aljazeera reported.

Fines of up to 10,000 Swiss francs (£8,200) could be given to anyone who refused, according to the counter proposal, which will enter into force if the Egerkingen initiative is rejected. 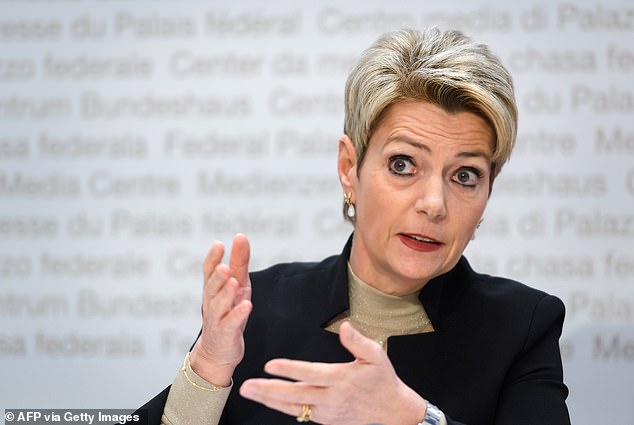 Under Switzerland’s form of direct democracy, any proposal to change the constitution that raise more than 100,000 signatures goes to a popular vote.

‘Very few people in Switzerland wear a full facial covering,’ the government said in a statement. ‘A nationwide ban would undermine the sovereignty of the cantons, damage tourism and be unhelpful for certain groups of women.’

Official statistics show that Muslims make up only around 5 percent of Switzerland’s 8.6 million population.

a, burqa, majority, of, Swiss, Want
You may also like:

Why are many ethnic minorities unwilling to take Covid-19 vaccines