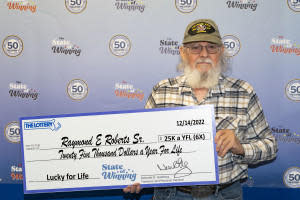 Christmas came early for one Massachusetts man who won not one, but six state lotteries.

According to the state lottery, Raymond Roberts Sr. won the $25,000 a year for life prizes in the December 14 drawing after he matched the first five numbers on each ticket.

Roberts, a Vietnam-era veteran, is from Fall River, a city located an hour south of Boston.

According to Roberts, his major win was the result of a gut feeling. He told lottery officials that his “intuition” led him to purchase multiple tickets – all with the same numbers. The numbers on each ticket were a combination of anniversary dates and birthdays, a series that the state said he had played in games for more than 20 years.

That combination earned him millions of dollars. When he picked up his prizes on December 15, he opted for a $390,000 cash option for five of his winning tickets, and an annuity option for his sixth, which promises him payments of $25,000 before taxes for at least 20 years. In total, he’ll have won more than $2 million before taxes.

He didn’t tell the state of all his plans for the money, but one thing’s for sure, he said – he’s using part of it to buy himself a motorcycle. That same day, another person in California won the world record breaking jackpot Powerball ticket – $2.04 billion.

And he’s not the only person to luck out from his win. Royal Liquor, the store at which he purchased the tickets, gets $5,000 for each winning ticket sold, a total of $30,000 in bonuses.

It’s been a lucky lottery season for many in the U.S.