A Massachusetts woman was arrested Wednesday, accused of stabbing a medical worker multiple times outside a hospital a day earlier in “an unprovoked attack,” according to authorities.

The suspect, Victoria Disharoon, 28, was slated to be arraigned Thursday following the incident at Morton Hospital in Taunton, about 40 miles south of Boston.

The victim, 44, was on a break from work around 1:15 p.m. when Disharoon allegedly approached her from behind, pulled her ponytail and stabbed her several times in the back, according to police.

“This was an unprovoked attack on one of our healthcare providers,” a Taunton Police Department statement said. 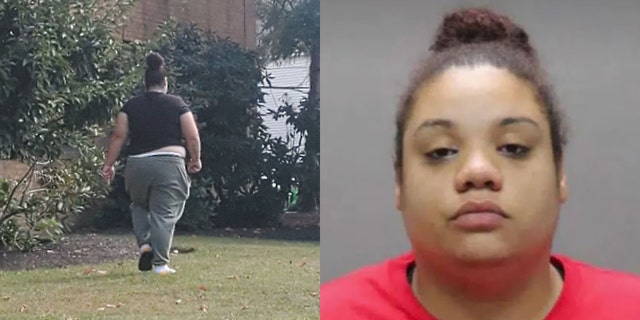 Victoria Disharoon, 28, of Taunton, is slated to be arraigned Thursday following a stabbing attack Tuesday outside Morton Hospital in Taunton. (Taunton Police Department)

The unidentified victim originally told police she believed she was punched several times in the back – while noting she felt like she was being stuck with something while being punched. The victim later discovered multiple puncture wounds on her shoulders and neck from the attack, police said. She has since been treated and released from the hospital.

The victim told police she was able to get away and report the attack to a fellow employee. She also used her cellphone to take a photo of Disharoon as the suspect left the scene on foot, police added.

Taunton Police received multiple tips from the public and another police agency after the photo of Disharoon was released earlier Wednesday, FOX affiliate Boston 25 reported.

Disharoon was arrested around 4 p.m. in Raynham, less than 5 miles northeast of Taunton. Authorities seized a pocket knife they believe was used in the attack, according to the station.

The victim started working as a secretary at the hospital just two weeks ago, Boston 25 reported. She told police she didn’t know Disharoon, and the attack appeared to be random.

“I was surprised, very surprised. It’s usually a safe neighborhood. I’ve never heard of anything like that happening around here,” hospital employee Mike Fragga told the station.

Safety around the facility has been a major concern in the past year, according to Jacqueline Fitts, Chair of the Morton Hospital Nurses Union.

“We have been asking administration for a year now to make the property safer, to cover the parking lot with security because there is a lot of people passing in and out of the area,” Fitts told WHDH-TV. “Our nurses and other staff go outside for breaks.”

Disharoon faces charges including assault and battery with a dangerous weapon, according to the Taunton Police Department.