Washington: Vladimir Putin has dismissed Joe Biden’s description of him as a “killer” as Hollywood machismo.

Ahead of their summit in Geneva on Wednesday, Putin also described Donald Trump as an “extraordinary and talented individual”. 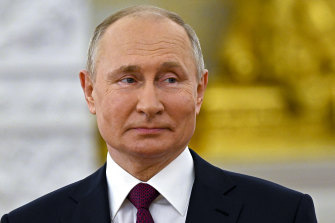 Russian President Vladimir Putin has dismissed questions about his reputation as a killer.Credit:AP

In an interview with US network NBC, Putin was asked directly if he was “a killer,” as Biden has alleged. The Russian President chuckled at the question, saying: “Over my tenure, I’ve got used to attacks from all kinds of angles and from all kinds of areas under all kinds of pretext and reasons, and of different calibre and fierceness, and none of it surprises me.”

He added that “killer” was a “macho” term common in Hollywood.

Putin bristled when NBC reporter Keir Simmons named specific opponents of Putin’s who have been killed in recent years. “I don’t want to come across as being rude, but this looks like some kind of indigestion except that it’s verbal indigestion,” he said, before dismissing the deaths as a list of people who “suffered and perished at different points in time for various reasons, at the hands of different individuals.” 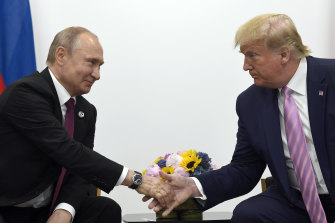 Putin praised former US president Donald Trump. The pair are pictured at a meeting in 2019.Credit:AP

Putin said Russia’s relationship with the United States had “deteriorated to its lowest point in recent years,” but said he could work with Biden. Russian officials and state media have lauded the fact the summit is happening as a triumph.

“For the Kremlin, the meeting, and the fact that Biden himself asked Putin to meet, proves Russia’s position as a great power and shows respect for Putin,” Maxim Suchkov, director of the Centre for Advanced American Studies at Russia’s leading diplomacy school MGIMO University, said.

One prominent Russian TV news host said: “Biden is in for a diplomatic match with a super heavyweight fighter from Russia.”

The White House announced on Sunday that Biden will hold a solo news conference after the meeting with Putin, denying the former KGB spy an elevated international platform to castigate the West and sow discord.

“We expect this meeting to be candid and straightforward,” a White House official said.

“A solo press conference is the appropriate format to clearly communicate with the free press the topics that were raised in the meeting — both in terms of areas where we may agree and in areas where we have significant concerns.”

A Time magazine cover last week with Putin reflected in Biden’s aviators sent the Russian state media into a state of frenzy.

“Putin in Biden’s eyes” and “Putin on the cover of Time” were some of the headlines.

“The American publication is clearly more interested in Biden’s meeting with Putin than with any other heads of state,” state-owned channel Rossiya said, pointing out that Geneva is just one of several stops in Biden’s European tour.

Sergei Markov, a flamboyant Kremlin-connected pundit, described Biden’s phone call to Putin as “Russia’s genuine victory” after the US President reached out to the Russian leader and offered to meet, putting an end to weeks of sabre-rattling in April when Russia amassed a record number of troops by the Ukrainian border.

Dmitry Peskov, Putin’s spokesman, described the call as “very very important” while Russia media relished comments by Washington’s hawkish commentators who lashed out at Biden for not being tough enough on Russia as something that proves that Moscow has got the upper hand in getting the invitation.

Russian state television recently sided with Biden against prominent Republicans who have mounted a campaign protesting against the summit with Putin.

Rossiya-1, one of the top state channels, lashed out at “hotheads in the US pressing Biden to scrap the summit”.

a, dismisses, Killer, Me, putin
You may also like: