A car mechanic got quite the surprise on Monday when he opened up a car bonnet to find a metre-long (3ft) python staring back at him.

The Sunfire Royal Ball Python was discovered during an MOT at CSN Autos in Norfolk.

According to garage owner Chris Newell, the snake was ‘just chilling’ on the engine when he was found by one of his workers.

However it soon transpired that the snake had been hiding in the Vauxhall Vivaro for an epic two weeks and belonged to the stepson of the vehicle owner.

Sophie Turner, 30, said she thought the garage was ‘winding us up’ when Mr Newell rang her partner Jim Catton, 32, to let him know about the hidden passenger. 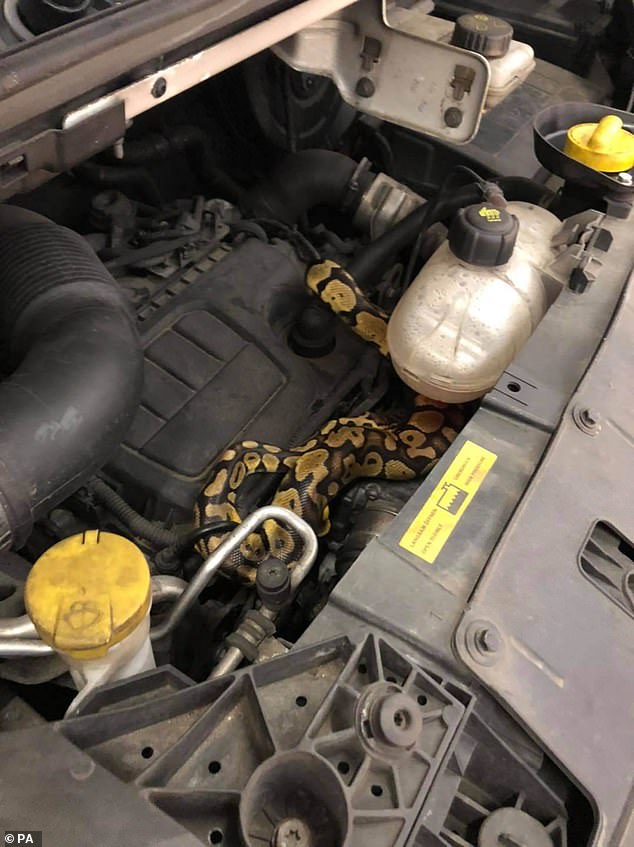 Civil Serpent: Gav the snake was found ‘just chilling’ on the engine at CSN Autos in Norfolk on Monday after disappearing two weeks ago

The snake, named Gav, was purchased by her son Ellis in May and was named after his late uncle.

However his tank was accidentally left open a fortnight ago and the slippery serpent vanished – but not before giving the boy next door a terrible fright.

‘He (Ellis) had his bedroom window wide open, his bedroom door was shut,’ Ms Turner said.

‘The snake obviously slithered out.’

She said she heard a neighbour’s son scream that evening and wondered why, and the next morning her neighbour said the boy thought he had seen a snake.

They laughed it off at the time, she said – but her partner later found that the python was missing.

She said that Ellis was ‘over the moon’ to have Gav back, and that they were lucky that the snake was still in the car as they had been driving around in the vehicle for the last two weeks. 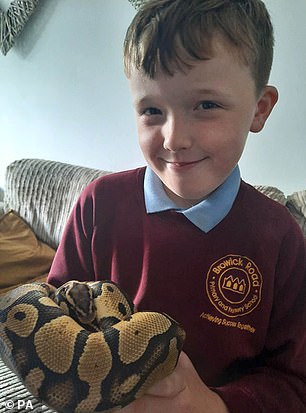 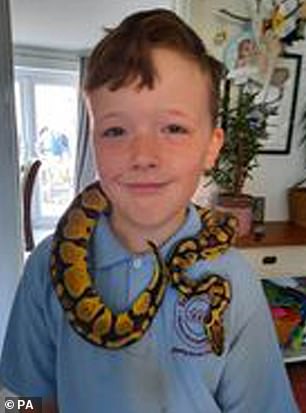 Fang-tastic news: Ellis was reunited with his pet snake Gav, which he had only just purchased in May before it slithered off and vanished two weeks ago

‘Since then we’ve been out in the car – dinosaur park, Great Yarmouth, shopping, fishing, everywhere – the whole time he was obviously in the bonnet,’ added Ms Turner.

‘He had a mouse a few days before he’d gone and that would’ve helped with his survival.

‘He went into the engine under the bonnet to keep warm.

‘The fact he didn’t drop out… I know snakes are nocturnal and they sleep during the day, we’re lucky he didn’t come out the bonnet at the dinosaur park or anything like that.’

The basking zone for pythons ranges from 30C to 32C.

They are not venomous and use constriction to kill their wild prey. 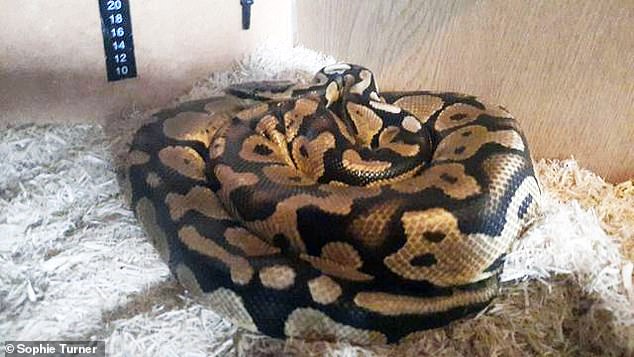 No hissy fits: Garage owner Chris Newell said the mechanic who found the snake ‘didn’t really react at all, which made it quite funny, to be fair’, while Gav the snake was ‘just chilling’

Lotus Cars worker Mr Catton cycled to fetch Gav from the garage with a pillowcase.

Ms Turner said she ‘felt bad’ that they had not initially believed the neighbour’s son who said he saw a snake.

‘He was describing it like “it was over a metre long, and it had patterns on it and it was yellow and brown”,’ she said.

‘Me and his mum were laughing, and all along he was actually telling the truth.

‘Honestly he was petrified, screaming, you’d have thought there was a murder in the street.’

Mr Newell said the mechanic who found the snake ‘didn’t really react at all, which made it quite funny, to be fair’.

‘(The snake) was just sat on the engine, just chilling on there,’ he said.

Mr Newell said he knew Mr Catton and so called him and asked him to check the snake tank, before reuniting the family with their pet.

Are pythons safe to have as pets?

Pythons are found in sub-Saharan African countries and in parts of Asia.

They are non-venomous snakes and kill by constriction, latching on with their teeth and coiling around their prey.

Burmese pythons can grow up to 23ft with other species, like the ball python, growing to around 6ft.

Due to their docile natures, pythons are one of the most popular snake breeds to be kept as pets. However, attacks on their handlers are not uncommon.

A python had never been known to have killed a person in Britain until the death of Dan Brandon in 2018, but there have been previous fatalities across the world.

A man was killed by a python in Indonesia earlier in the same year, while two boys died in Canada after one escaped from a pet shop in 2013.

Noah Barthe, four, and his brother Connor, six, were at a sleepover at Jean-Claude Savoie’s flat above the shop, called Reptile Ocean, in August 2013.

The African rock python got out through a ventilation duct in Campbellton, New Brunswick, and dropped into the living room where the two boys were sleeping.

It strangled and bit them to death and sparked a court trial, where the owner was cleared of responsibility.

3ft, finds, Mechanic, name, Python
You may also like: