He has protected the residents of Pontypandy for more than 30 years and counts the likes of Prince George among his legion of fans.

Now Fireman Sam is being joined by a marine biologist with a prosthetic leg who will highlight green issues.

The new character Jodie Phillips will encourage young viewers to look after the ocean and keep safe at the beach in the 13th series of the animated TV programme.

Show makers Mattel Television and WildBrain said: ‘This season is very different with new characters, animals and vehicles and for the first time a strong sustainability message for young tots.

‘There is a new character – the daring and adventurous marine biologist Jodie Phillips, teaching Pontypandy how to look after and be safe around the ocean. 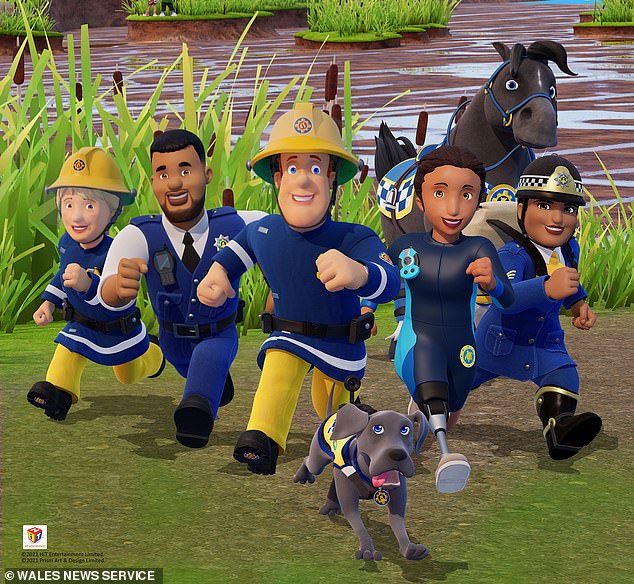 Fireman Sam has entertained children – and promoted a fire safety message – for 34 years and the show’s YouTube channel has had more than 9.6billion views worldwide.

‘She also happens to have a prosthetic leg, which does not hinder her from helping Ocean Rescue save the day.’

The show, set in the fictional Welsh town, has highlighted environmental concerns before. In the episode The Highest Tide In Pontypandy, residents blame ‘this global cooking thing’ for floods that hit the town.

Jodie will be voiced by Doctor Who actress Ayesha Antoine. The show’s producers added: ‘She [Jodie] is passionate about all things oceanic and drives the eco-education focus in the new episodes.

‘Pre-school tots are encouraged to think about sustainable living and protecting marine life and the environment. Jodie is intelligent, fearless and a natural athlete using her custom prosthetic legs on land and sea – a positive, vibrant role model for Pontypandy.’

Fireman Sam has entertained children – and promoted a fire safety message – for 34 years and the show’s YouTube channel has had more than 9.6billion views worldwide.