Meghan Markle sparks ‘yawns’ as she kicks off new Archetypes podcast with account of her challenging Procter & Gamble over sexist TV commercial aged 11: ‘I was ready to turn off when I heard the soap ad story YET AGAIN’

Social media users hit out at Meghan Markle for touting, yet again, how she challenged a major American consumer goods company over its ‘sexist’ dish soap advert at just 11 years old.

Markle, 41, shared the tale during the first episode of her ‘Archetypes’ podcast which was released on Spotify today.

She said she took action by launching a ‘letter writing campaign’ to political pundits, including the-First Lady Hillary Clinton, to challenge the verbiage the company used in the commercial.

The Duchess of Sussex said the experience was ‘awakening to the millions of ways, big and small, that our society tries to box women in.’

Her critics also slammed the podcast as being unbearable, noting they were ‘ready to turn it off after 20 seconds.’ 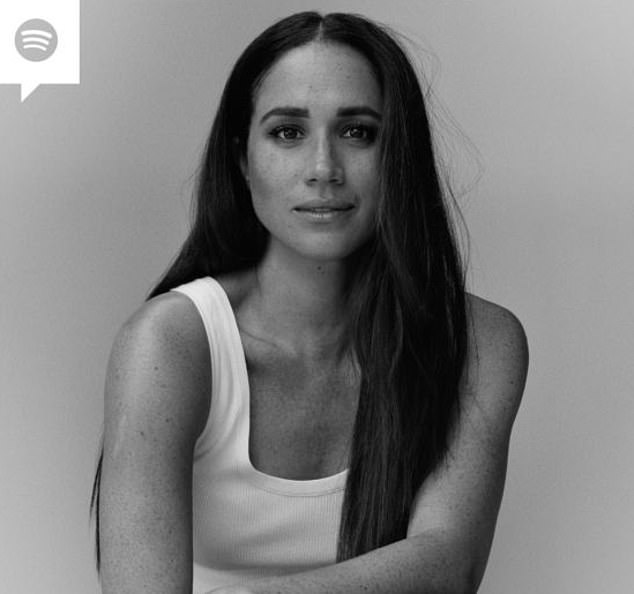 Social media users hit out at Meghan Markle for touting, yet again, how she challenged a major American consumer goods company over its ‘sexist’ dish soap advert at just 11 years old 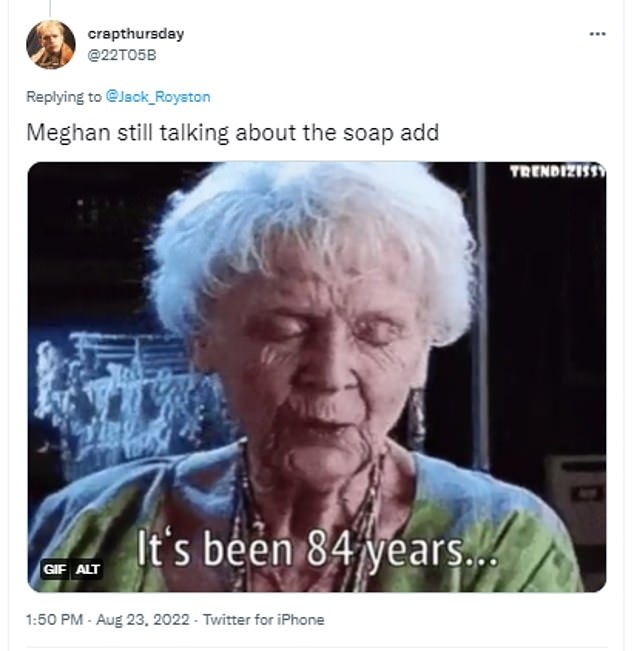 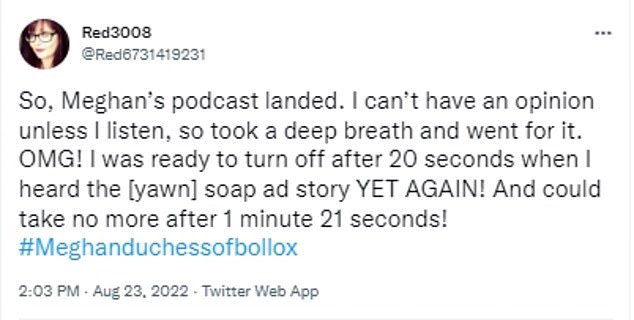 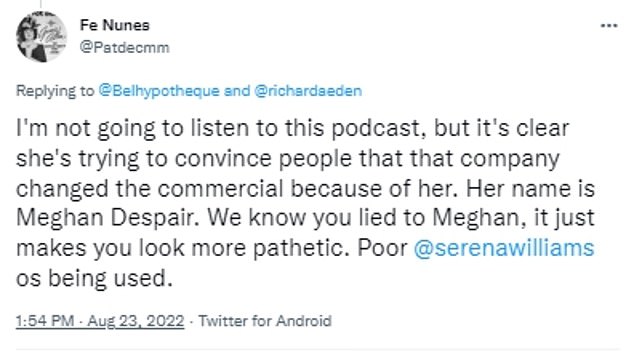 Entitled ‘The Misconception of Ambition with Serena Williams’, Markle spoke to the tennis legend, who is one of her close friends, in the first episode of her new podcast.

The Duchess dove into the podcast saying: ‘When I was 11 years old, growing up in LA, I saw a commercial that would change the way I saw my place in the world.

‘Let me be clear, it wasn’t because this ad was some ingenious piece of marketing. Actually it was just the opposite.’

Markle said she was sitting in her sixth grade classroom, watching television alongside other pupils, when the advert rang out.

The narrator, speaking over catchy music said: ‘The gloves are coming off. Women are fighting greasy pots and pans with ivory clear.’

‘I was furious,’ Markle recalled on Tuesday’s episode. ‘Women? Did I really just hear that guy say “women”? As in only women? Only women.’

Furthermore, the royal described how after the commercial played, two boys in her class ‘breathed life into my biggest fear.’

‘They said, “Yeah! that’s where women belong! In the kitchen.” Oh man, this did not sit well with 11-year-old me.’

Markle also hit out at those who criticised her for being ‘ambitious’ when she started dating Prince Harry.

She also told of the ‘pain’ that she has suffered ‘behind closed doors’ – and revealed that her son Archie narrowly escaped a fire in his bedroom where he was supposed to be sleeping during the Sussexes’ tour of South Africa.

Meghan said: ‘Now, look, I’m not Catholic. I wasn’t raised Catholic. But about one year after my letter writing campaign, I started middle school at Immaculate Heart (in Los Angeles). I stayed there, through high school. I was there for six years. And this feminist ideology trickled down into nearly every aspect of my education.

‘It’s probably safe to say into every aspect of my life. This message to me and my classmates was clear: our futures as young women were limitless. Ambition. Well, that was the whole point.

‘So I don’t ever remember personally feeling the negative connotation behind the word ambitious, until I started dating my now husband. And apparently ambition is a terrible, terrible thing. For a woman that is, according to some.

‘So since I felt the negativity behind it, It’s really hard to unfeel it. I can’t unsee it either in the millions of girls and women who make themselves smaller, so much smaller on a regular basis.

‘So I wanted to talk to someone who embodies the spirit of ambition to see how she thinks about the word and the connotation, and how the other many labels that affect all women have affected her too.’

Speaking to Williams, Meghan also said: ‘In our friendship when you have to see things that are mischaracterising of me, but you experience behind closed doors the pain that I’m going through.

‘What I think is so interesting is that even though that’s on a world stage, I don’t know if that feels much different for any woman. If you’re in a small town and you see someone saying something about your best friend that is just completely untrue, how that feels.

‘The thought of these, like, Archetypes, but it’s the kind of stuff you and I talk about so much, these boxes and these labels – the things that we both have been called and witnessed each other being called.’

Meghan added: ‘As you heard in my chat with my dear friend, the notion of ambition come with many judgements and nuances – especially for women.

‘The misconception that if you’re an ambitious woman you have an agenda, you must be calculating or selfish or aggressive, or a climber.

‘And that if you’re that fierce or strong, or brave then you soemehow deserve whatever gets thrown at you – however disproportionate or unfair it may be, and even when it’s more than most could endure. Most men, most anyone.’

Entitled ‘The Misconception of Ambition with Serena Williams’, the Duchess of Sussex spoke to the tennis star in the podcast

Talking about her guests – which will also include Mariah Carey next week – Meghan said: ‘They’ve all in some way borne the brunt of the labels we’ll be picking apart, and of course I know a thing or two about these labels myself.’

Meghan, 41, and Williams, 40, also shared personal stories about the struggles they have faced being new mothers.

At one stage, the Duchess recounted how her son Archie narrowly escaped a fire in his bedroom where he was supposed to be sleeping during the Sussexes’ tour of South Africa.

Archie’s then nanny, named only as Lauren, had taken the four and a half month old with her downstairs instead while she went to get a snack when, meanwhile, the heater in the nursery caught fire.

Meghan said: ‘In that amount of time that she went downstairs, the heater in the nursery caught on fire. There was no smoke detector. Someone happened to just smell smoke down the hallway, went in, fire extinguished. He was supposed to be sleeping in there.’

The former Suits star told how they had dropped their young son at the housing unit they were staying in for a sleep straight after arriving on their official tour, with Meghan and the Duke of Sussex leaving to carry out a visit to the Nyanga township, where the duchess delivered a speech. 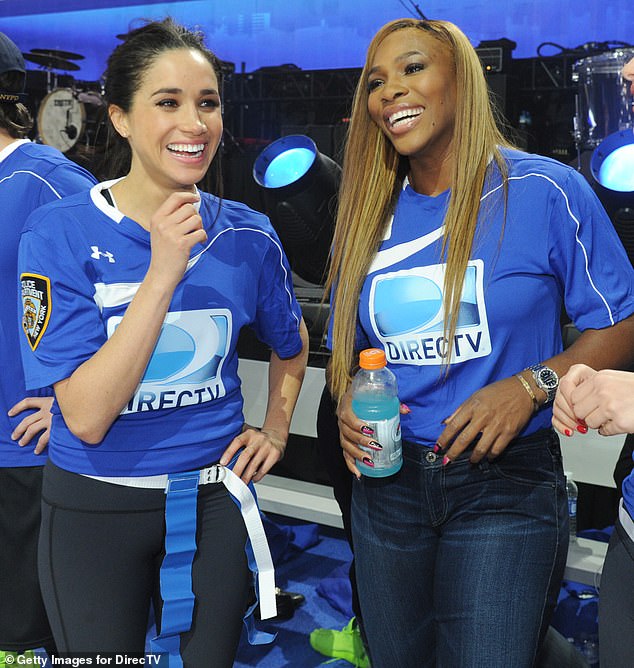 Meghan Markle and Serena Williams in New York City in 2014 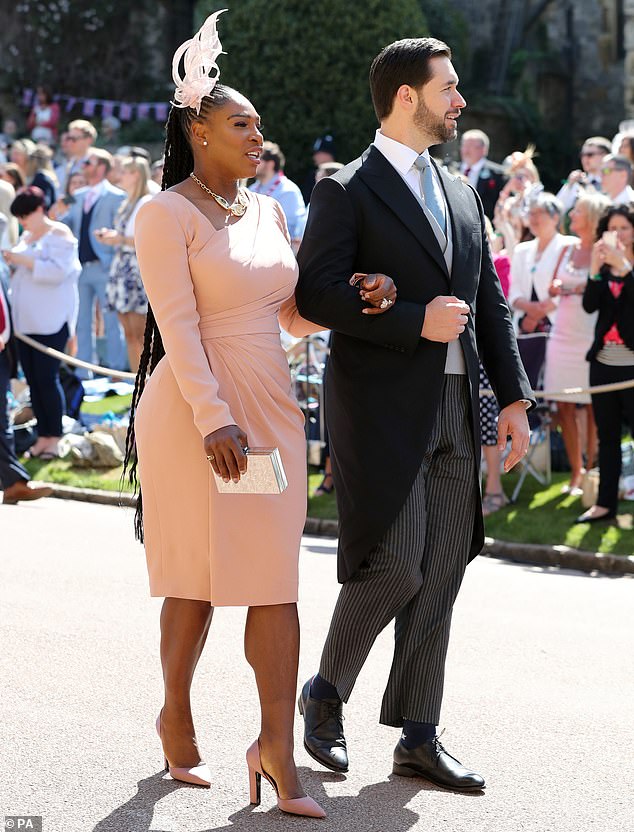 ‘There was this moment where I’m standing on a tree stump and I’m giving this speech to women and girls, and we finish the engagement, we get in the car and they say there’s been a fire at the residence. What? There’s been a fire in the baby’s room,’ she said.

Meghan added: ‘We came back. And, of course, as a mother, you go, ‘Oh, my God, what?’ Everyone’s in tears, everyone’s shaken. And what do we have to do? Go out and do another official engagement? I said, ‘This doesn’t make any sense’.’

Harry also makes an appearance in the episode, with Meghan saying: ‘You wanna come say hi? Look who just popped in.’

Meghan and Williams greet Harry with ‘Hello’ in British accents, with Harry telling Williams: ‘I like what you’ve done with your hair. That’s a great vibe.’

Williams replies: ‘Thank you. Good to see you too as always, I miss you guys.’

The duke responds ‘Well come and see us’, with Meghan saying they will make a plan.

As Harry leaves, Meghan remarks: ‘Thanks my love.’

Williams also revealed Harry helped her with the decision to retire from tennis long before it was announced, spending around an hour discussing the issue with her.

Meghan, who quit the monarchy as a senior working royal, said: ‘I think, you know, I think both of us, or the three of us, really know that sometimes the right decision isn’t the easiest decision.’

She told Williams: ‘It takes a lot of courage, I think, too, to stop something in many ways than to keep going sometimes.’

The Archewell Foundation announced earlier this year that the couple’s Spotify podcast would finally debut this summer – 18 months after inking the lucrative deal.

Archetypes is hosted by Meghan who will speak to historians, experts and woman who have experienced being typecast.

In a prior trailer for the Archewell Audio project, the duchess said: ‘This is how we talk about women: the words that raise our girls, and how the media reflects women back to us. But where do these stereotypes come from? And how do they keep showing up and defining our lives?’.

The Duchess, previewing the type of guests who will feature, added: ‘This is Archetypes – the podcast where we dissect, explore and subvert the labels that try to hold women back.

‘I’ll have conversations with women who know all too well how these typecasts shape our narratives. And I’ll talk to historians to understand how we even got here in the first place.’

Meghan and Harry signed a lucrative deal with the audio streaming giant to host and produce podcasts, estimated to be worth around £18million, in late 2020.

But they had only released one show prior to now – a holiday special featuring their son Archie and celebrity guests, in December 2020.

Meghan has long been a campaigner on female empowerment. Spotify and Archewell Audio described her conversations with typecast women as ‘uncensored’ and said the duchess would delve into the origins of stereotypes.

The podcast is being produced by Archewell Audio in partnership with Gimlet Media for Spotify.