Paris has art deco metro entrances, London is known for its red pillar-box bins, and Melbourne has curly bike racks and bluestone kerbs.

But Victorians are looking beyond their stainless steel seats for inspiration from around the world as the design of Melbourne’s street furniture comes under review for the first time. 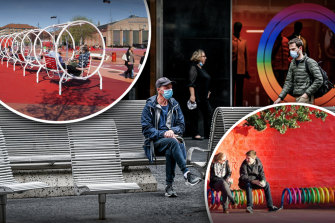 Examples of street benches from around the world, including Melbourne’s stainless steel seats in Bourke Street Mall.Credit:Joe Armao, BIG

The city’s draft design and construction standards are now open for public consultation. They set out guidelines for everything from the integration of dog bowls and bottle refill taps into drinking fountains to the appearance of rubbish bins (stainless steel is preferred, except in heritage precincts where they are Brunswick green).

Acting Lord Mayor Nicholas Reece said Melbourne was already renowned for the design of its street furniture, city lights and signage, as well as the quality of materials in the public realm.

“Our draft design and construction standards are the next step forward to raise the bar on a culture of design excellence and cement our place as a world-leading design city,” he said. 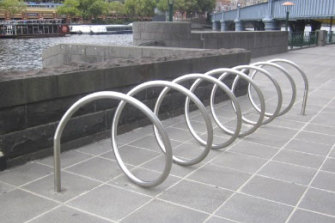 Reece said the council wanted to ensure there was a clear guidebook for how to provide the best public space outcomes.

“The central city is like home for all Melburnians and this is [the people’s] opportunity to have a say about the furnishings,” he said.

Street furniture has a 25 to 30-year life span, so it requires timeless design. It’s also a significant investment, with Melbourne’s city benches costing between $2000 to $5000, rubbish bins around $6000 and lighting poles up to $10,000. 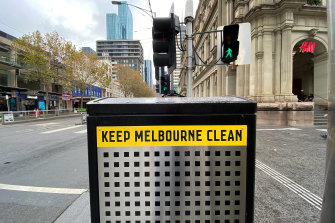 Stainless steel is the preferred finish for Melbourne’s rubbish bins under the guidelines.Credit:Joe Armao

Melbourne University associate professor of architecture and former advisor to the mayor of London, Rory Hyde, said the way street furniture could shape a city was highlighted in a Copenhagen project by Danish architecture firm BIG, which scattered street furniture from 60 different countries in one area.

The objects, which included exercise equipment from Los Angeles, neon signs from Russia and a climbing frame from India, reflected the diverse ethnicity of residents and encouraged community use of the area through “urban living rooms” and play zones.

But he said problems could be created with the lack of cohesiveness in elements that were added later, such as the fences at the tram super stop in front of Federation Square.

“You’ve got this beautiful tram stop and then someone’s just gone and got a yellow fence from Bunnings to put down the centre of the tracks so people don’t cross over. It’s like, ‘Come on guys, we can do better than that’.” 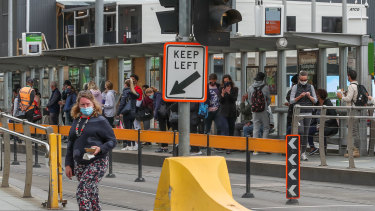 A yellow fence in the middle of a tram stop on Flinders Street.Credit:Asanka Ratnayake/Getty Images

Hyde said street furniture was important because it offered a prism to understand how different people were treated in the city and how its values were communicated.

“I’m sure a lot of people don’t have a second thought about the bins they walk past or the seating they walk past, but it is important that someone does think about it because it’ll work well or it’ll work badly,” he said.

“People know when they visit a city that works and that they enjoy and Melbourne is one of those cities, but you can’t take your hands off the wheel.”

Legge said it was important to recognise the materials and spaces that made Melbourne memorable.

“If we started to get rid of the bluestone and putting concrete down everywhere, then people would start noticing eventually,” he said.

“It’d take a while but they’d notice and then it wouldn’t be Melbourne anymore. I think lots of this stuff goes under the radar. But it’s important for a good city.”

Consultation on the City of Melbourne’s design and construction standards is open until June 15.