Brown lawns, dried-up lakes and cobwebs on garden taps – the memories of a city running out of water still linger for Melburnians who experienced what was dubbed the millennium drought.

It may have felt unthinkable back then, when water storages dropped to a low of 26 per cent in mid-2009, but Melbourne’s dams are now close to overflowing for the first time in a quarter of a century.

Melbourne’s water storages are 95 per cent full on average after several years of heavy rainfall, including back-to-back damp summers, prompting the state government to turn off Victoria’s desalination plant to prevent good drinking water from being discarded.

Four of Melbourne’s 10 drinking water reservoirs have hit 100 per cent, while the Thomson dam in Gippsland – the city’s biggest water source, with space for 1.07 million megalitres – has reached 98 per cent.

Melbourne’s water levels haven’t been this high since 1996, with excess water already flowing into some downstream creeks and rivers.

The Bureau of Meteorology is forecasting yet another wet summer in Victoria, with a third consecutive La Nina event expected to hit Australia’s east coast.

According to the bureau, there is a more than 75 per cent chance of above-average rainfall across Melbourne and its already soaked water supply catchments in the next three months.

To avoid spilling, Melbourne Water is making controlled releases between dams to fill up smaller storages and leave space in bigger reservoirs such as the Thomson (98 per cent full), Upper Yarra (85.6 per cent) and Cardinia (88.5 per cent).

Melbourne Water has also recommended that the state government cancel the rest of its annual order from the Wonthaggi desalination plant, which would have delivered a total of 15 gigalitres into the water supply this financial year.

The desalination plant cost $5.7 billion after being conceived by the Bracks government during the drought in 2007. It took five years to build and first delivered water to the system in 2017.

Other dams across the state are also hitting their limits. The Dartmouth dam, in north-east Victoria, has turned into a tourist attraction as water begins to spill over the sides. When full, its capacity is 4 million megalitres – four times as big as the Thomson.

Despite the rude health of Melbourne’s water supply, there is no suggestion that people should start taking 20-minute showers or hosing down their driveways.

Climate change is expected to bring less rainfall overall, with a water strategy recently released by the state government recommending that the city’s average daily consumption target be reduced from 155 litres per person to 150 litres.

Melburnians used 159 litres of water on average each day last year, compared with about 200 litres in Sydney. 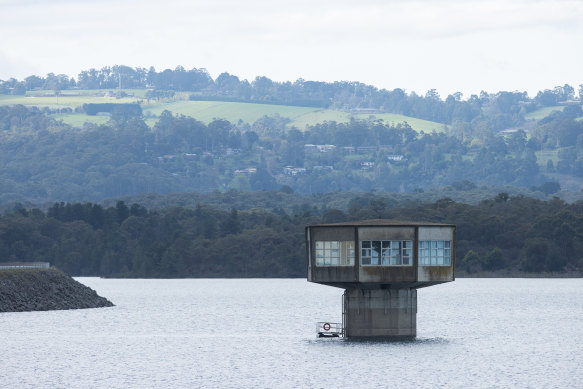 The Cardinia reservoir is more than 88 per cent full.Credit:Simon Schluter

Permanent water restrictions have remained in place since the end of the millennium drought, including limiting the use of watering systems to between 6pm and 10am.

“Having full dams doesn’t mean we can just increase our water usage because that uses up our insurance policy for the coming years,” said Monash University’s Dr Tim Peterson, who has researched the health of water catchments after the millennium drought.

Peterson said the dams filling up was part of the natural cycle of rainfall variability that south-eastern Australia experiences.

“It’s a good sign, it gives us water security for a while. I hope that people continue to limit their water usage,” he said. 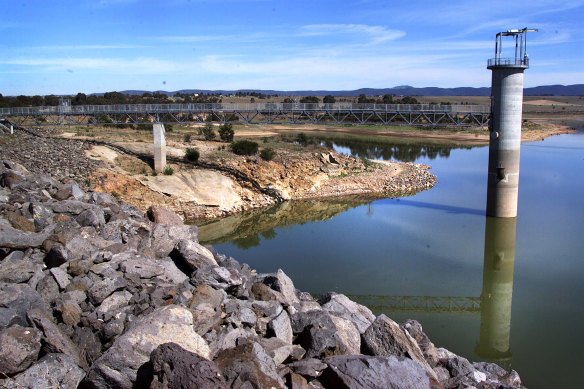 Sugarloaf reservoir during the drought in 2003, when it was about 50 per cent capacity. Credit:Paul Harris

Professor Stuart Khan, an urban water supply expert from the UNSW school of civil and environmental engineering, said a quarter of Melbourne’s drinking water supply has been coming from the desalination plant.

“That’s been helping to maintain the supplies in the dams,” he said.

“I’d argue that that’s still an expensive, high-energy source of water. And therefore, it really does make sense to try to implement and maintain reasonable water efficiency goals.”

As Melbourne’s water storages approach once-in-a-generation levels, Khan said now was the time for the state government to start thinking about future-proofing supplies ahead of the next drought. 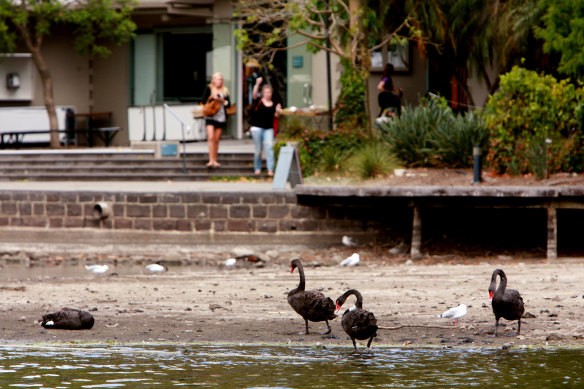 The lake at the Royal Botanic Gardens almost dried up in 2009, just before the drought broke.Credit:Rebecca Hallas

Water storages could fall by about 20 per cent in 12 months with a repeat of the dry conditions that occurred in 2006, Melbourne Water said.

With a desalination plant in operation and only small gains to be made from more water efficiency, Kahn said another option for “rainfall-independent supplies” was to purify recycled water for drinking.

“If Melbourne has to expand its water supplies, it’s not going to be through dams,” Kahn said.

“The Victorian government for the last decade have seemed to be very shy in talking about drinking recycled water, they see it as a political risk that they haven’t been prepared to take.”

A water strategy released by the state government this month recognises that water supplies will need to increase in coming decades. The report projected that 80 per cent of Melbourne’s water supply would come from manufactured water sources by 2070, compared with 35 per cent now.

However, the report suggests recycled water only be used for non-drinking purposes.

“All of the other big cities are rapidly moving in that direction,” Kahn said. “Melbourne is the odd one out in that case, but it will change over time.”