Messy student house with note above toilet saying ‘do not p*** on the floor’, bottles of vodka on coffee table and piles of unwashed laundry next to untidy kitchen goes on sale for £220,000

A messy student house on sale for £220,000 in Hull has been mocked because a sign has been left up telling people not to ‘p**s on the floor.’

The five-bed property is currently let to undergraduates until the end of the academic term next month.

The current owner says the buyer could make nearly £18,000-a-year in rent income.

But someone forgot to tidy up before the estate agents came around to photograph it.

Above the loo – which has a stained seat – there is a passive aggressive note taped to the wall warning the lodgers not to urinate on the tiled floor. 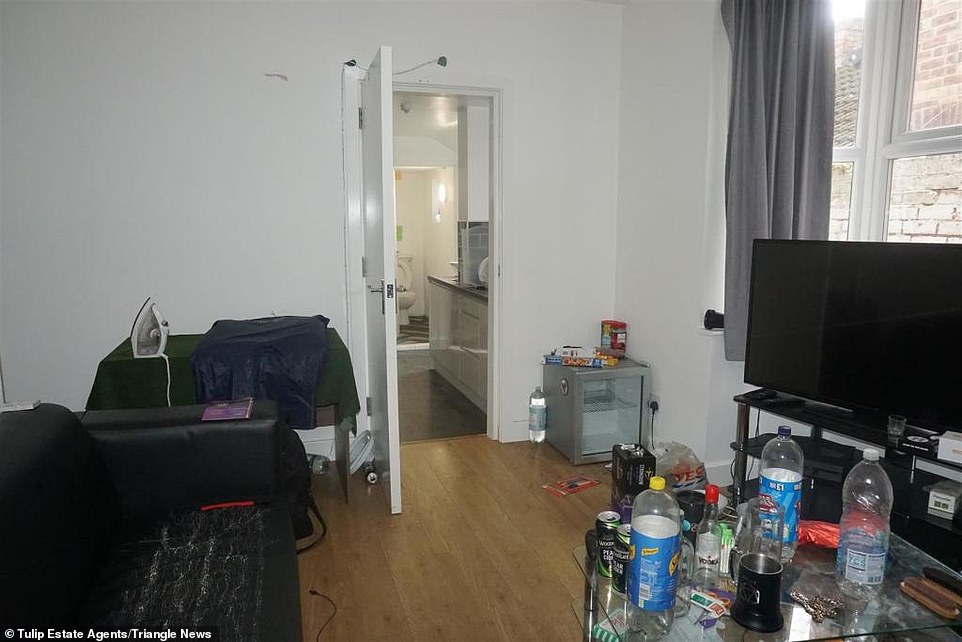 A student house in Hull (pictured) is up for sale for more than £200,000, however the photos from the estate agents show the squalor they live in (pictured: the living room table covered with empty bottles and cans of alcohol and fizzy drinks) 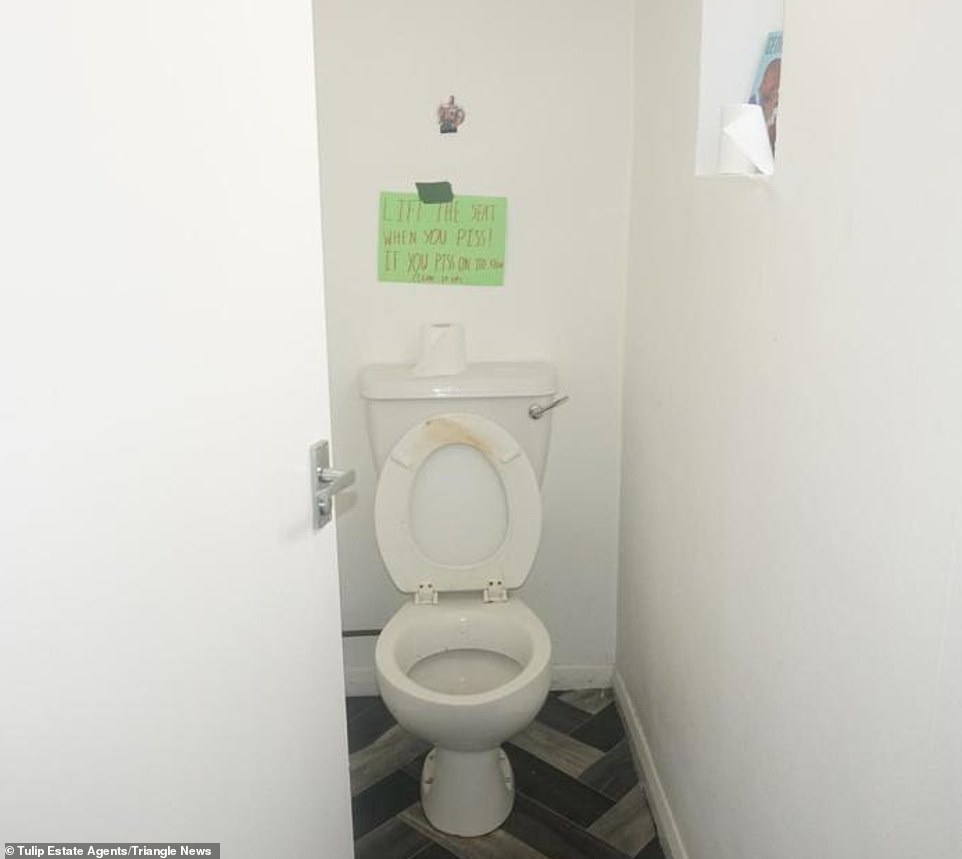 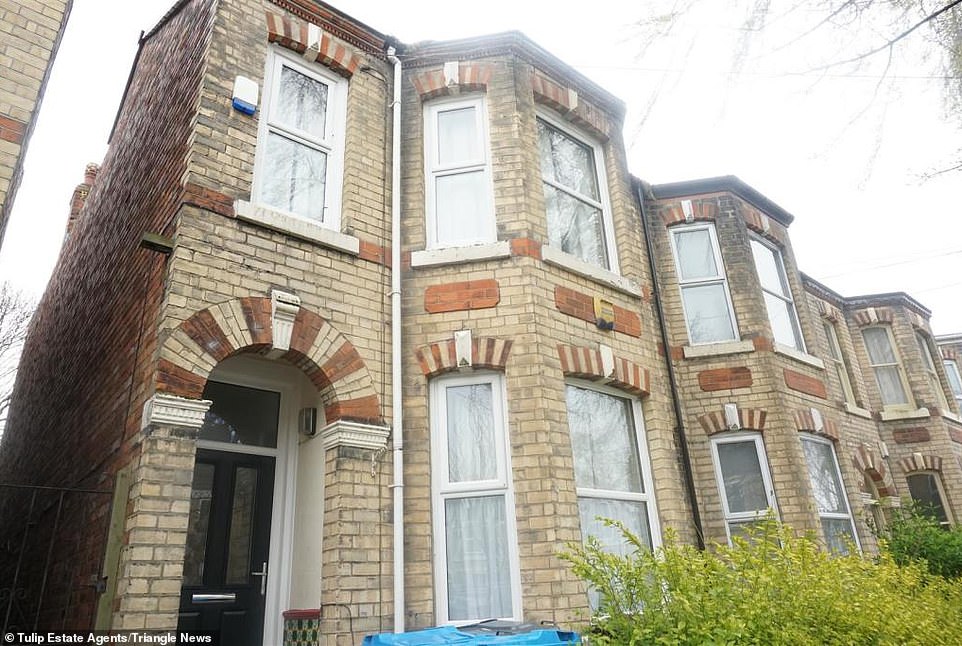 The two-storey five-bed student house is up for sale in Hull (pictured) for £220,000, but the current occupants will be there for another month 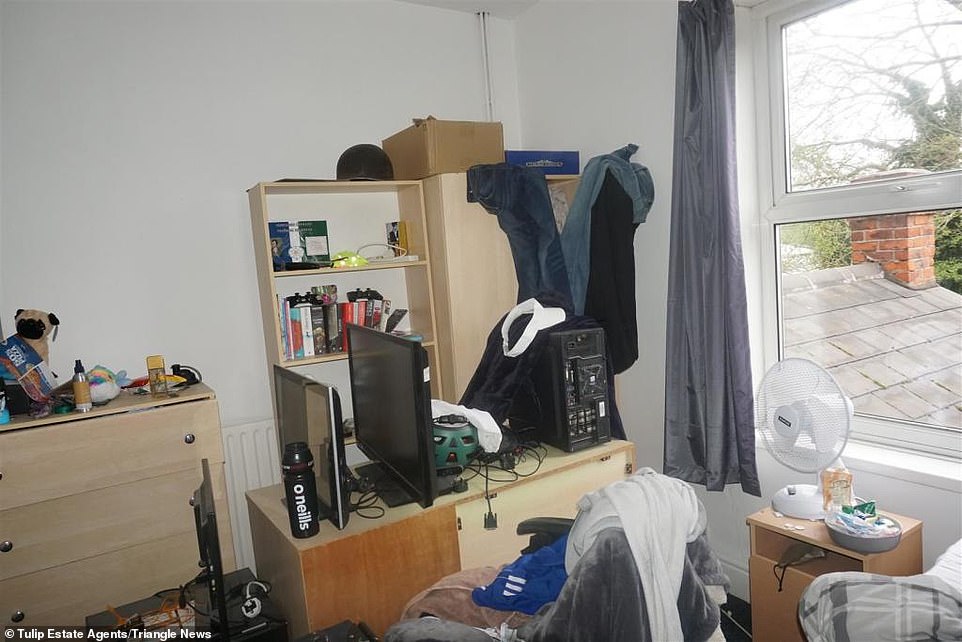 The bedrooms are clearly the living spaces of students, with clutter and clothes sprawled over chairs and wardrobes 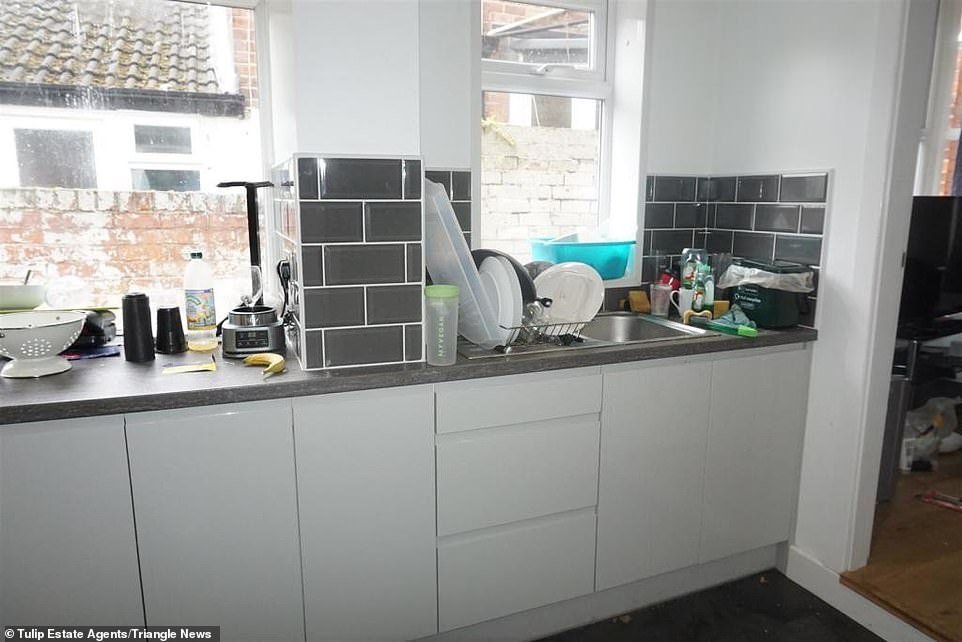 The sink in the kitchen appears to be clear of dirty plates, although the clean ones haven’t been put away 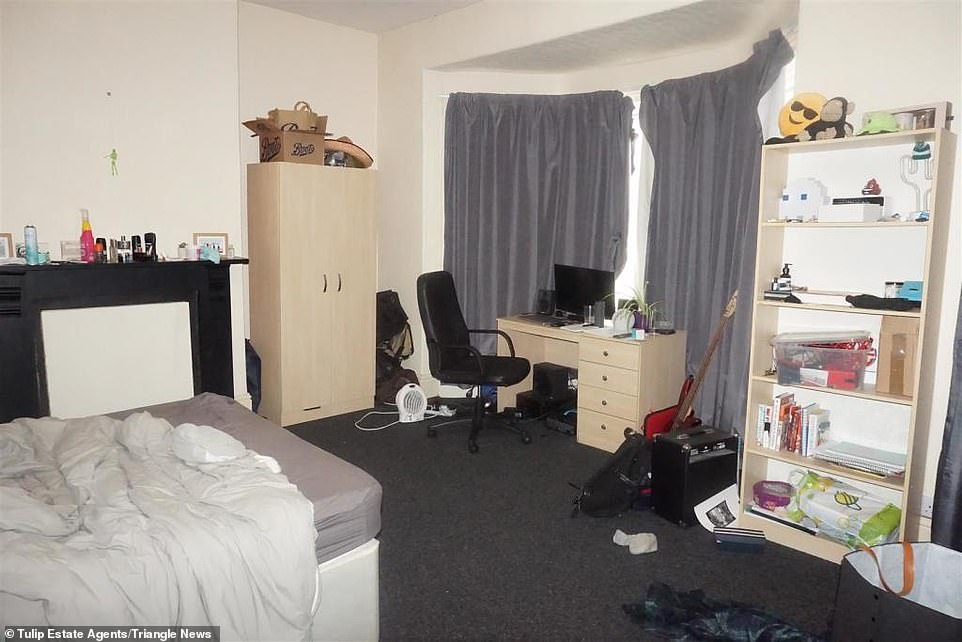 Some of the rooms are tidier than the others, but one critic said that ‘all the images are disgusting’

And if they do they are told to wipe it up and not just leave their mess for others to step in.

The angry sign reads: ‘Lift the seat when you p**s!

The semi-detached house in multiple occupation pad in East Yorkshire appears quite normal from the pavement outside.

But once you step inside you instantly know they are student digs.

The five bedrooms have unmade beds and have laundry drying everywhere.

The lounge is littered with empty drink cans and bottles.

Mountains of washing are piled up in the utility room and there is mess on the kitchen surfaces.

The garden is also full of rubbish and a discarded barbecue. 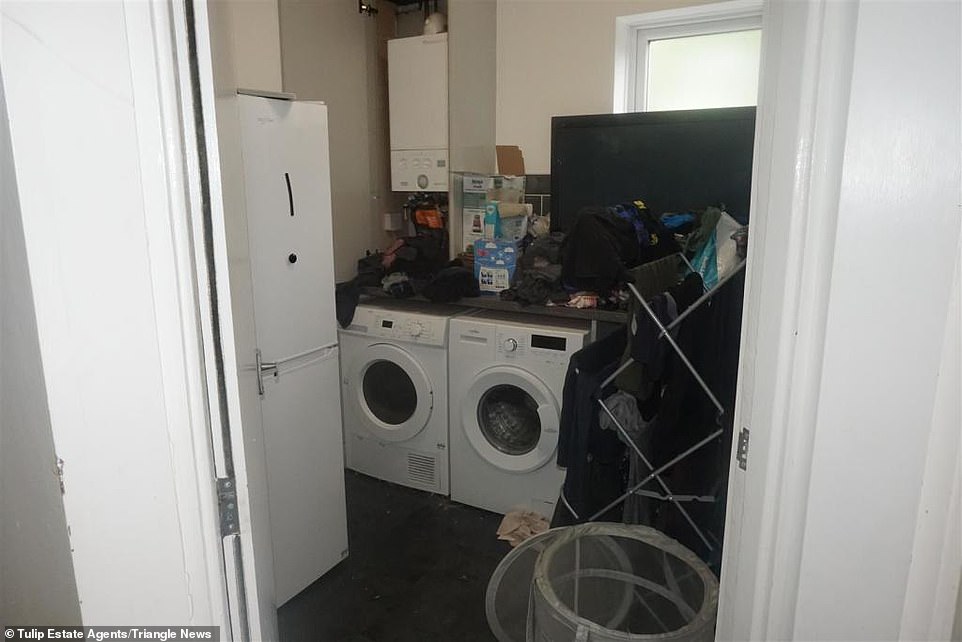 The cramped utility room has a washer, tumble dryer and a fridge on offer – with just enough room to put clothes out to dry 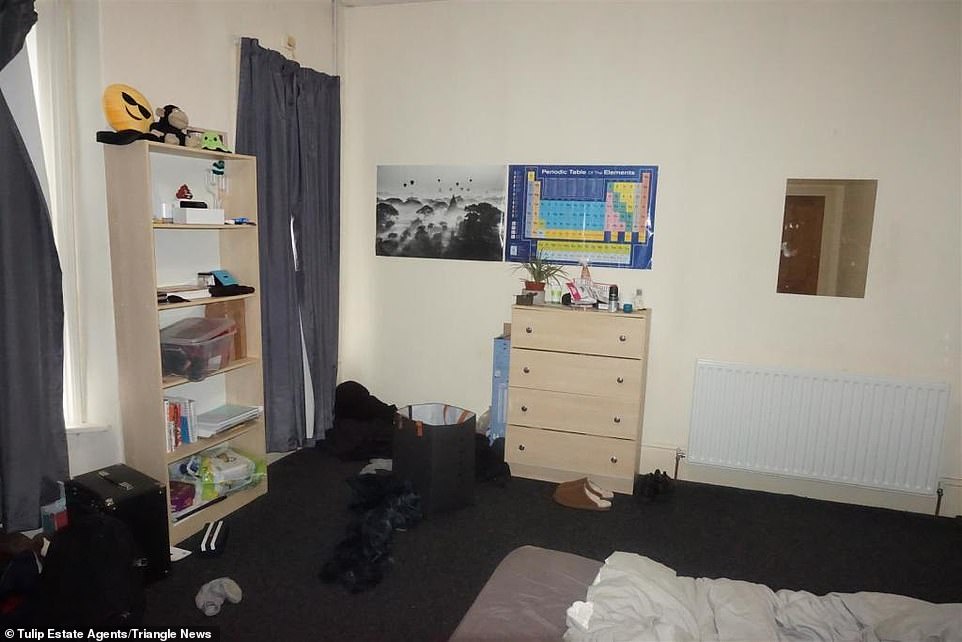 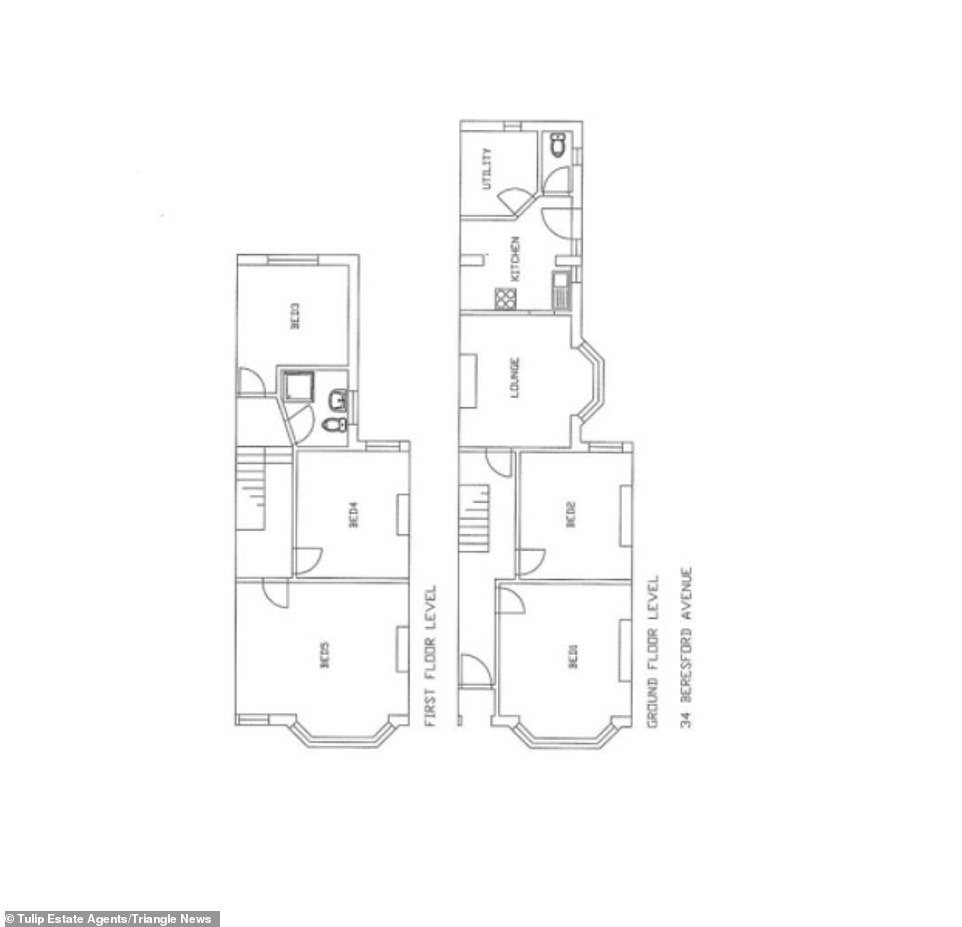 The layout of the house shows the two-storey property has five bedroom, a kitchen, a living room and two toilets 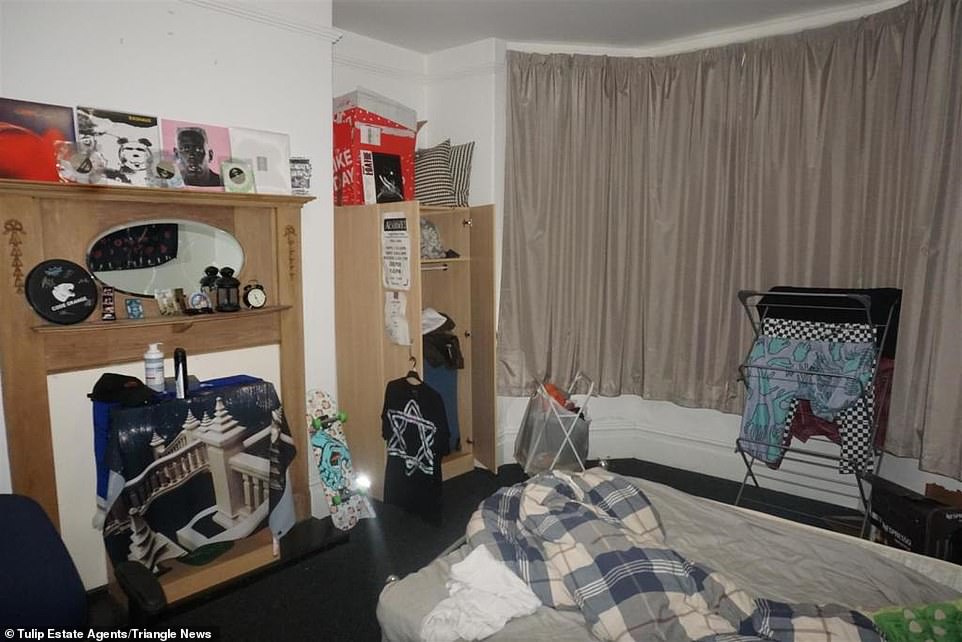 The house is currently occupied by students, but only until the end of the academic year when the new owner could look for some potentially tidier occupants 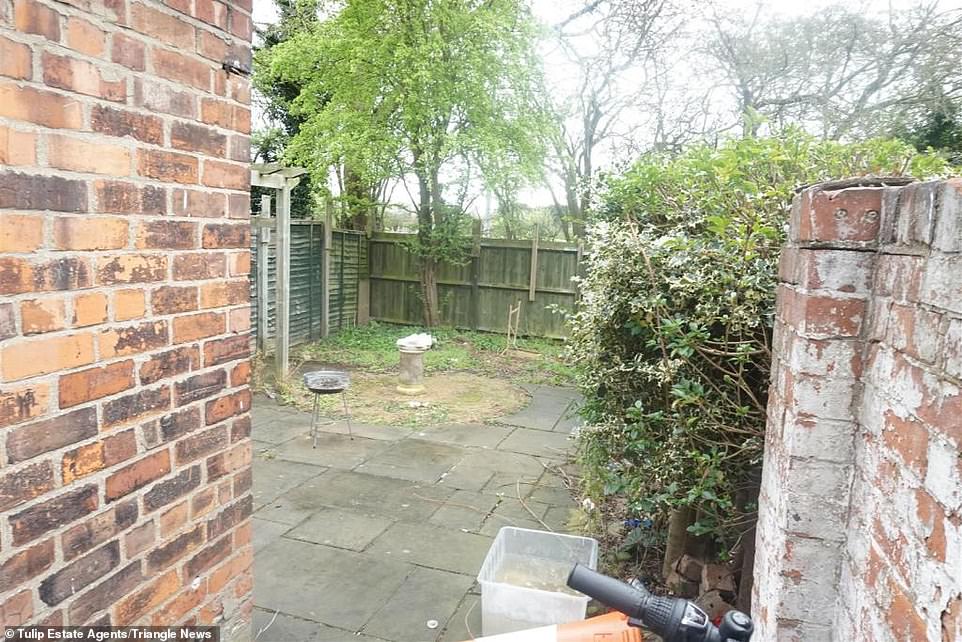 The house also has a ‘good size garden at the rear of the property’, featuring a small area of unkempt grass and a BBQ grill

Homehunter Paul Drake-Davis joked: ‘Agent’s done all they can to sell this one.’

Lilyth Coglan fumed: ‘All the images are disgusting.

‘They should be embarrassed.’

The house is on the market with Tulip Estate Agents and advertised through Rightmove.

The listing reads: ‘Currently let to students for academic year 2021/2022.

‘Good size garden at the rear of the property.’