Mexico City: Mexican President Andrés Manuel López Obrador said on Monday (Tuesday AEDT) the government is studying what to do about growers of opium poppies who have been hit by competition from synthetic opioids, suggesting that some sort of legalisation scheme might be possible.

Asked about legalising marijuana production — a bill for which is now before Congress — López Obrador said the question also involves opium poppies grown illegally in some parts of Mexico to make heroin. 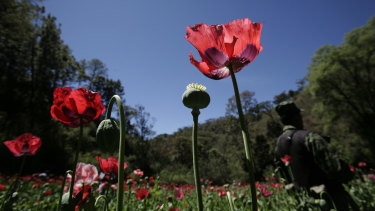 A soldier stands on a poppy field during eradication supervised by the Mexican Army on the outskirts of Morelia, Mexico. Credit:AP

“As far as commercialising marijuana and opium poppies, the decision has been made to undertake a thorough study of these crops,” López Obrador said.

The government has tried introducing alternative crops, like timber and fruit orchards, in poppy-growing areas, but López Obrador clearly suggested the new study was in addition to those efforts.

He said farmers in remote mountain communities in Mexico had lost income because traffickers are switching to buying fentanyl from Asia, rather than paying people to grow poppies and harvest poppy gum needed to process heroin.

“We are in the stage of analysis and reflection about what will most benefit Mexico,” he said. “There are now unparalleled conditions to do what most benefits Mexico and our people, because the current government is completely free, it is not subordinated to any foreign government.” 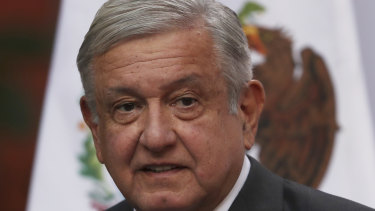 That was an apparent reference to US pressure to reduce Mexico’s production of opium, almost all of which is smuggled into the United States.

Studies of legal opium production have circulated in Mexican government circles since before López Obrador took office in December 2018. However, a number of factors meant those proposals were never adopted.

Production of medicinal opioids needed for operations and terminal patients — something that has been proposed in the past — would require a much stricter control over farmers than Mexico is ever likely to achieve in the mountain communities of northern Mexico and the Pacific coast state of Guerrero where illegal production is currently centred.

The US Drug Enforcement Administration said in a recent report that poppy and heroin production in Mexico both declined in 2019. It said “low opium prices paid to poppy farmers in Mexico, coupled with an increase in fentanyl use in the United States, likely impacted the decrease in cultivation.”

Dealers are increasingly cutting heroin with fentanyl to increase its potency, and “DTOs (drug trafficking organisations) may come to view heroin as simply an adulterant to fentanyl,” according to the report.

But even if marijuana growing is legalised and some solution is found for poppy growers, Mexico still faces an expansion of illicit drug crops.

In February, López Obrador said experimental plots of coca leaves, the raw material for cocaine, had been found in the southern Mexico state of Guerrero. The plant is native to South America and up to now has mostly been cultivated in Bolivia and Colombia.

“I want to tell the bad guys that we know that they are experimenting with coca production in Guerrero,” the president said. “We found some coca plots in Atoyac,” a conflictive township known for drug gang violence and drug production.

Any legalisation of opium poppies would present yet another point of friction with US authorities, already stung by Mexico’s decision to withdraw immunity for foreign agents and restrict their activities in Mexico.

Mexico also strong-armed the United States into releasing a former Mexican defence secretary arrested in Los Angeles in October on drug charges. Mexico cleared retired General Salvador Cienfuegos after conducting only a cursory investigation of the US evidence against him, and then published the whole case file.