Mexico's former top cop on trial in NYC, accused of working for cartel 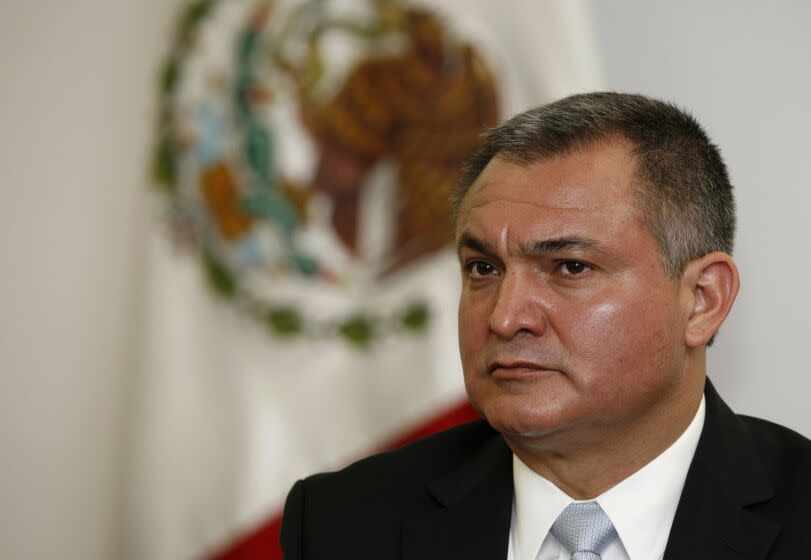 Just a few days into the trial of drug lord Joaquín "El Chapo" Guzmán, a witness dropped a bombshell allegation: A Sinaloa cartel associate testified that he had personally given Mexico’s top drug cop briefcases full of cash — millions in bribes to let the cartel operate with impunity.

Now, the man who had been considered an architect of Mexico’s anti-drug battle and a key partner of U.S. law enforcement is going on trial Tuesday in the same New York federal court. Genaro García Luna — head of Mexico’s version of the FBI from 2001 to 2006 and public security minister from 2006 to 2012 — is accused of conspiring with the criminals he was ostensibly aiming to take down.

García Luna, 54, who was arrested in December 2019, is the highest ranking Mexican official to face trial in the U.S. on drug-trafficking charges — four counts of conspiracy to traffic cocaine. It’s as if the head of the FBI or Drug Enforcement Agency was accused of taking millions in drug money.

García Luna frequently met with top U.S. security officials while in office and was often portrayed as the public face of Mexico’s drug war. But prosecutors say they plan to show that the former Mexican top cop provided the cartel with safe passage for its drug shipments and with sensitive information about investigations into the cartel or rival gangs.

This is the most important national security and drug-trafficking trial of this century, even more so than El Chapo’s, said Rodolfo Soriano Núñez, a sociologist and former professor who has long studied the use of military force in Mexico.

“We knew Chapo was dirty,” Soriano said, “but Chapo is nothing but a peasant from rural Sinaloa.” García Luna, by contrast, was a powerful public official who held the trust of Mexico’s president from 2006 to 2012, Felipe Calderón, who mobilized the military and federal police in what became a bloody and more than decadelong battle against drug cartels.

“It has the potential to unveil one of the key aspects of the so-called war on drugs here in Mexico,” Soriano said, “which is that of the ties, the links, the connection between political power and the so-called drug gangs.”

A jury is expected to be selected early this week, with opening statements in the Brooklyn court soon to follow. 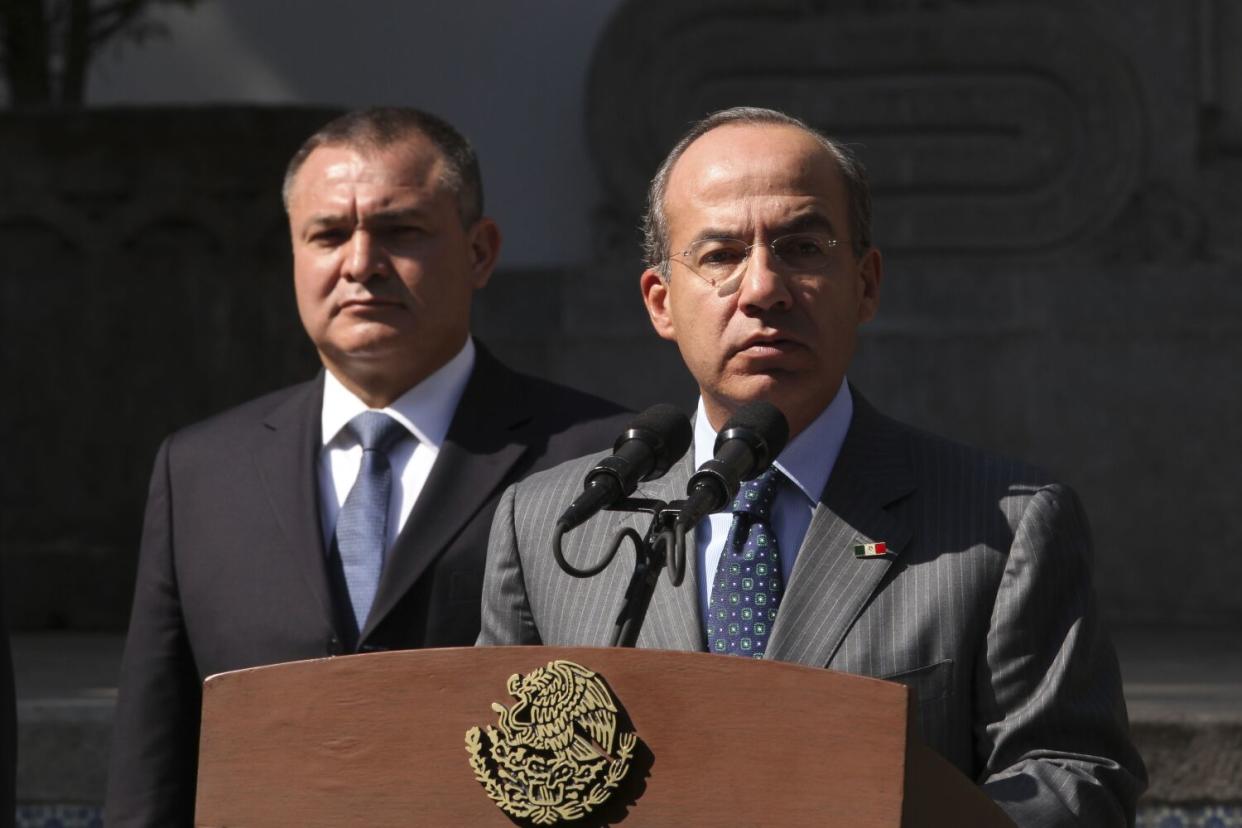 The stakes of the trial

The testimony and evidence that could come out at the trial could have far-reaching consequences on both sides of the border.

With a career spanning three decades, García Luna has intimate knowledge of the drug war in Mexico and ties to the country’s administrations going back to the early 2000s. And he had a particularly close relationship with the DEA and FBI from the latter part of President George W. Bush's second administration through President Obama’s first, said Guadalupe Correa-Cabrera, a professor at George Mason University.

Revelations from the trial could be a major stain on past administrations in Mexico. To critics of the drug war, a conviction would confirm the failure of the joint U.S.-Mexico effort, which received billions of dollars in U.S. aid and was blamed for tens of thousands of deaths — but did little to reduce cartel violence or smuggling.

The trial could put additional strain on declining security cooperation between the two countries. During the Calderón years, U.S. security agencies had essentially a free pass to go wherever they wanted in Mexico, Correa-Cabrera said.

“Las agencias entraban hasta la cocina,” said Correa-Cabrera, using a Mexican expression that translates as “The agencies made it all the way into the kitchen.” She noted that Mexico’s current administration has shifted toward more limited cooperation with U.S. security agencies on Mexican territory.

And with the 2024 U.S. presidential election in sight, experts say the United States doesn’t hold a lot of leverage to pressure Mexican authorities to change that, considering how much Washington relies on Mexico City to control U.S.-bound migration through Mexico.

Who is García Luna?

As minister of public security from 2006 to 2012, García Luna is widely regarded as the architect of Calderón’s controversial war on the drug cartels.

García Luna started his career at the National Intelligence Center, Mexico’s CIA equivalent, in 1989 and joined a special counterterrorism unit. After nearly a decade, he joined the federal police, and in 2001, then-President Vicente Fox named him head of the new Federal Investigation Agency.

At the agency, known as the AFI, which has since been dissolved, García Luna led what was hailed as a transformation of Mexico’s police forces.

In a series of interviews that Correa-Cabrera had with García Luna in 2017 and 2018, he said that the federal judicial police had ties to drug trafficking and that he had been given the responsibility to clean it up.

“AFI was the promise of a better police, one not connected to drug trafficking,” she said.

The Mexican government at the time likened the new agency to the FBI. When Calderón took the presidency in 2006, he elevated García Luna to his Cabinet. 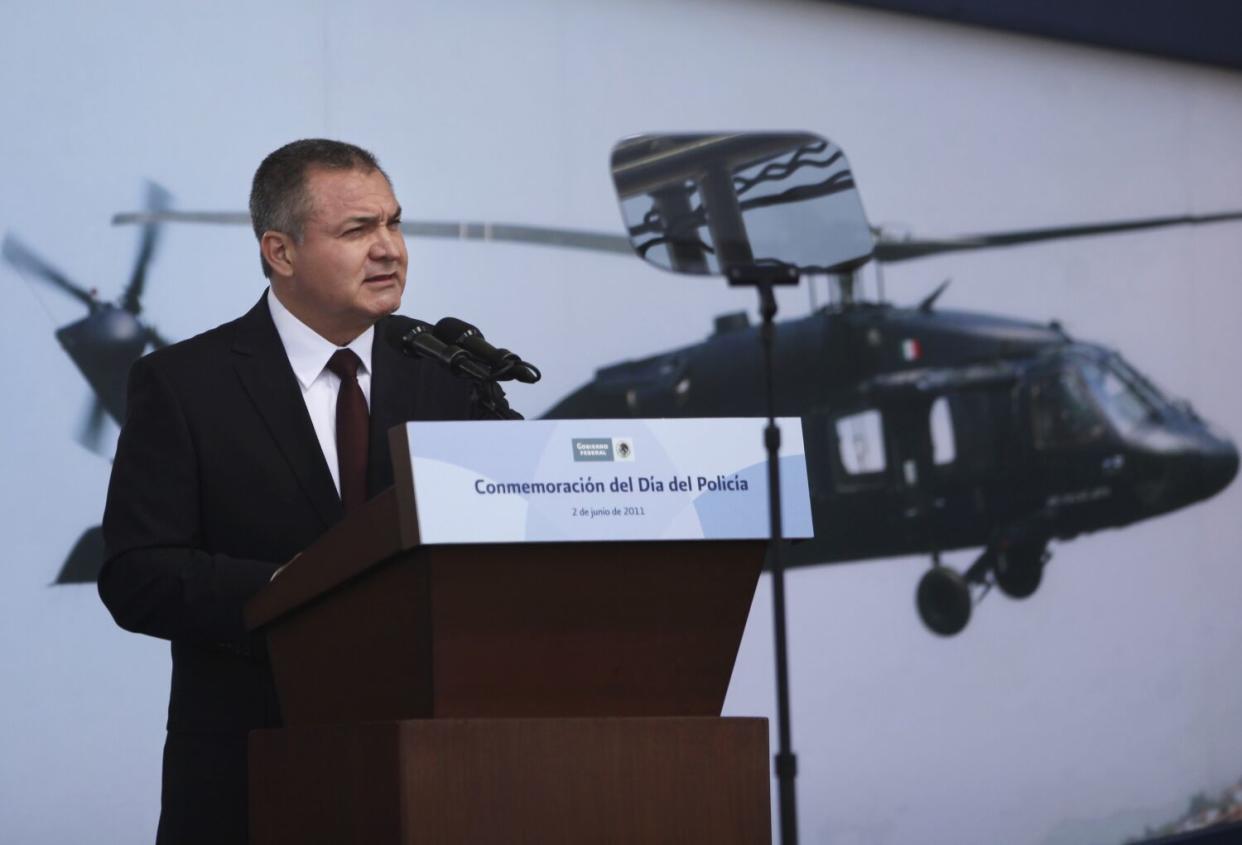 Soon after Fox took office in 2000, the government captured several Sinaloa cartel members. But after that initial sprint, things quieted down. Opposition politicians and security experts started to question why the government’s hunt for the elusive cartel leader El Chapo seemed to have gone cold.

Calderón’s declared war on the drug cartels shattered old alliances and drove drug lords to fight over the territory. There were high-profile arrests, but they were mostly from rival organizations such as the Zetas or the Beltrán Leyva organization. Rumors of government favoritism toward the Sinaloa cartel grew louder.

During the heat of the drug wars in 2008, Mexicans in several states woke up to banners or narcomantas hanging from bridges or spread across the entrance to a cathedral that accused García Luna of protecting drug dealers.

One of the most controversial claims appeared in a letter published in November 2012 in the pages of the well-regarded national newspaper Reforma. Writing from prison, Édgar "La Barbie" Valdez Villareal, a drug kingpin from the Beltrán Leyva cartel, accused García Luna and his closest associates of receiving narco money since 2002.

“I can attest that he has received money from me, from drug-trafficking groups and organized crime,” said Valdez, before adding, “I may be guilty of a lot, but they, the officials, are part of the criminal structure of this country.”

Officials said the accusations were an attempt by Valdez to gain privileges while in prison; García Luna remained untouched. (Valdez was sentenced in 2018 by a U.S. judge to 49 years in prison.)

When Calderón’s term ended in 2012, García Luna fell out of the public eye. Married with two children, he was granted permanent residency in the United States and was soon a routine guest at conferences hosted by American universities.

He started a private security consulting and risk management firm with offices in Miami and Mexico City. His clientele included foreign governments and companies, and his primary client was the Mexican government, his defense said in pretrial filings.

In 2018, he applied to become a naturalized U.S. citizen. Before his arrest in Miami, he was living in a waterside mansion “with a dock and boat for his use,” all given to him by his business partners because “he had no wealth to speak of at the time,” García Luna’s defense wrote in a court filing.

“Because his business partners wanted to ensure Mr. García Luna’s continued involvement with their business, they provided him a place to live in Miami,” the defense wrote.

It seems unlikely that García Luna’s trial — which is expected to last two months — will be as theatrical as that of Guzmán, who was famous worldwide as an escape artist who had long eluded arrest.

But prosecutors have telegraphed in court filings that they expect to present numerous witnesses — including former high-ranking members of the Sinaloa cartel — to testify about the bribes García Luna is accused of accepting.

The judge granted prosecutors' requests for an anonymous and partially sequestered jury, the same protections that were used during Guzmán’s trial.

The documents in the case are voluminous. García Luna’s public defender, assigned by the court after the defendant’s assets were seized, has complained in initial court appearances about having to go through “millions of pages” of evidence with little support.

If found guilty, García Luna could face a minimum of about 20 years in prison and a maximum of life.

Another arrest, at LAX

However, López Obrador was furious when, the year after García Luna’s arrest in Dallas, U.S. authorities detained a former Mexican defense secretary, Salvador Cienfuegos Zepeda, moments after he landed with his family at Los Angeles International Airport.

Like García Luna, Cienfuegos was charged with collaborating with Mexican drug cartels while in office.

López Obrador, facing fierce backlash from the powerful military, denounced the charges against Cienfuegos and demanded that Washington release the retired general. The Trump administration ultimately dropped the charges and returned Cienfuegos to Mexico, where he went free.

In Mexico, López Obrador — who once assailed the deployment of the military against drug cartels — has been harshly criticized for greatly expanding the military’s role in internal security.

“He is repeating the same mistakes [as Calderón],” Soriano said.