Three men armed with weapons jumped out of an SUV seconds before they unleashed a barrage of gunfire at a Miami-area banquet hall that left two dead over the holiday weekend and over 20 people injured, according to surveillance video released by authorities on Monday.

The brief video shows a Nissan Pathfinder pulling up to the El Mula banquet hall in the early Sunday morning hours in the suburb of Hialeah. The hall was hosting a rap concert at the time.

Three people wearing masks are seen getting out holding weapons and running toward the building.

Seconds later they get back in and the SUV speeds off. Authorities said several people were shot while standing outside the hall when the gunmen indiscriminately opened fire. Several people in the crowd who were armed returned fire, authorities said Monday. 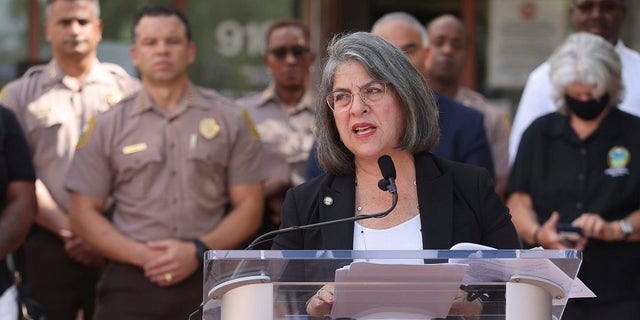 Two men, both 26, were killed, and 21 were injured. The Miami-Dade Police Department said 18 victims, including five women, remain hospitalized. No arrests have been made.

Three other victims – a 31-year-old woman and two men, ages 21 and 25 — remain in critical condition. Three people have been released from hospitals, including a 17-year-old who was shot in the leg. 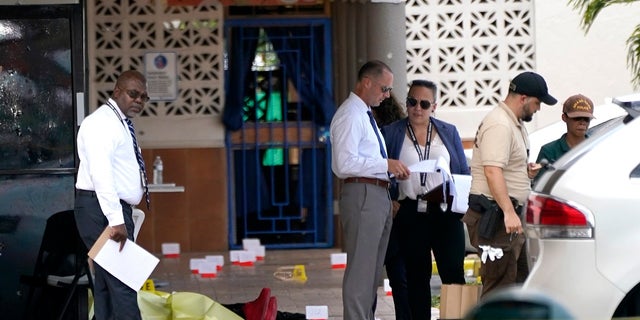 Law enforcement officials work the scene of a shooting outside a banquet hall near Hialeah, Fla., on Sunday. (AP Photo/Lynne Sladky)

“We have intelligence information that this resulted from an ongoing rivalry from two different groups,” said Major Jorge Aguilar of the Miami-Dade Police Department. “We know that our intended target was most likely in front of the establishment when the shooting took place.”

One man, identified by Fox affiliate WSVN-TV as Clayton Dillard, whose son was killed in the shooting interrupted the news conference when he stepped in front of the podium.

“You killed my kid,” he said. “You must burn! Y’all took something that was given to me as a gift. Whoever did this will burn!”

He was escorted away by officers as Miami-Dade Police Director Alfredo Ramirez spoke.

Authorities said feuds like the one that culminated in Sunday’s shooting often escalate on social media as groups exchange insults back-and-forth.

“What’s really the engine is what they’re saying in their rap songs or what they’re posting on videos that are trigger words that create a retaliation,” Ramirez said.

The shooting came as the Miami area has grappled with a series of shootings in recent days. Over three days, 30 people have been shot, authorities said.