Music promoter Michael Gudinski died of mixed drug use, with 12 drugs including cocaine, oxycodone and morphine found in his system.

Court documents released by the Supreme Court of Victoria on Thursday said the drugs were found in a man with existing conditions of heart disease, cirrhosis and recent vertebral fractures. 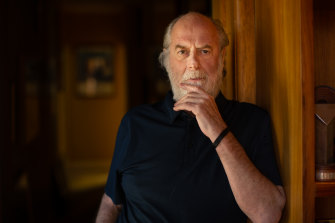 Michael Gudinski was widely acknowledged as the most powerful person in Australian music.Credit:Simon Schluter

The beloved impresario, who died aged 68 on March 2, left his wife and children a $45.9 million fortune.

At the time of his death, Gudinski was reported to have passed away in his sleep of a heart attack. But his death certificate, released by the court on Thursday, lists the cause of death as “mixed drug use … in a man with ischaemic heart disease”, a condition in which reduced blood supply starves the heart of oxygen.

His 2019 will, which listed real estate assets worth $30 million and a personal estate worth $15.9 million, divides his fortune among his widow Sue, the will’s executor whom he married in 1984; son Matt, 36, now chief executive of Mushroom Group; and daughter Kate, 33.

The will allocates 51 per cent to a trust for Sue Gudinski and 24.5 per cent each to trusts for Matt and Kate. The trusts will be managed by Sue Gudinski, lawyer David Grace, QC, and accountant Theo Rigopoulos. 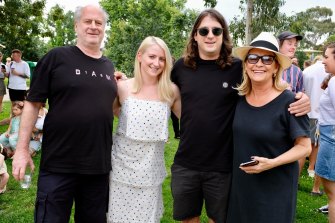 Despite not being able to play a single note, Michael Gudinski was beloved and widely acknowledged as the most powerful person in Australian music.

Gudinski was beloved by many in the industry for his passion and enthusiasm and promotion of younger acts. Singer Ed Sheeran, who flew to Australia and quarantined so he could perform at the memorial, has dedicated his new album to the promoter.

When Gudinski was buried on March 10 at St Kilda Cemetery, roadies and stage crew gathered in black to honour him.

The impresario died in the midst of the pandemic, which left the industry that he loved facing its greatest challenge.

Mushroom partnered with the government on a number of initiatives to bolster the live music industry. Premier Daniel Andrews called his friend a “wonderful Victorian, a great Australian … we think of him kindly and fondly”.

Gudinski, born to Russian immigrants, his father a builder and his mother a homemaker, co-founded Mushroom Records with Ray Evans in 1973 and remained chief executive of the extensive Mushroom Group – the largest independent music and entertainment company in Australia, which was home to eight record labels and more than two dozen specialist divisions as well as Frontier Touring and Chugg Entertainment.

Apart from his mansion, his estate’s main asset was a settlement loan from Michael Gudinski Promotions, worth $14.7 million.

His assets include stakes in related companies, including booking agency Premier Artists, valued at $83,619, but his shares in Mushroom Music were only worth $1500. A Mushroom Pictures loan was valued at $322,522.

Gudinski is survived by his wife, Sue; son Matt and his partner Cara; daughter Kate and her husband Andrew; and their children Nina-Rose and Lulu. He made no bequests and died debt-free.

died, Gudinski, Michael, mixed, of
You may also like: