How a good night’s sleep could do wonders for your sex life: Middle-aged women with bad quality kip have a lower libido, study finds

Getting a good night’s sleep does wonders for the sex lives of middle-aged women, according to a study.

Researchers found women who had regularly struggled to fall asleep or woke up often were 50 per cent more likely to have a lower libido – a weak sex drive.

This could be because being exhausted releases more stress hormones, which suppress people’s sexual desires.

How many hours of sleep a woman got didn’t affect their sex drive, the Mayo Clinic researchers found – it was sleep quality that mattered the most.

Previous studies have suggested men who don’t sleep enough are also more likely to be uninterested in sex or to get less enjoyment from it.

As many as one in three Britons, or 16million people, sleep badly, the NHS says. And more than a third of American adults also get insufficient shut-eye. 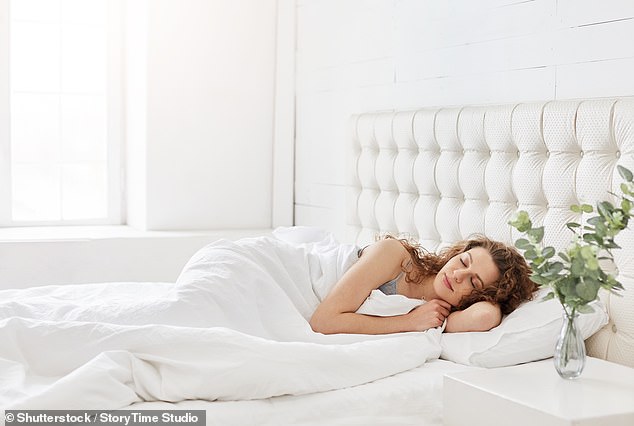 Middle-aged women who don’t get a good night’s sleep are more likely to face problems in the bedroom, according to a study (stock image)

The study was done by Mayo Clinic researchers in Rochester, Minnesota, who question 3,200 women about their sleep and sex habits.

Participants were quizzed about their sleeping patterns, including whether they wake up regularly or struggle to drop off.

HOW TO COPE WITH SLEEP PROBLEMS

Poor sleep can lead to worrying and worrying can lead to poor sleep, according to the mental-health charity Mind.

A lack of shut eye is considered a problem when it impacts on a person’s daily life.

As a result, they may feel anxious if they believe lack of sleep prevents them from rationalising their thoughts.

Insomnia is also associated with depression, psychosis and PTSD.

Establishing a sleep routine where you go to bed and get up at the same time every day can help a person spend less time in bed and more time asleep.

Having tech-free time an hour or so before bed can also prepare you for sleep.

If you still struggle to nod off, keeping a sleep diary where you record the hours you spend asleep and the quality of your shut eye on a scale of one to five can be a good thing to show your doctor.

Also note how many times you wake in the night, if you need to nap, if you have nightmares, your diet and your general mood.

Talking therapies can help your recongise unhelpful thought patterns that might affect sleep.

While medication, such as sleeping pills, can help break short periods of insomnia and help you return to better a sleeping pattern.

They were given a score between zero and three, based on how well scientists ranked their sleep.

Researchers gauged participants’ sex lives by adding questions to the survey on their attitudes to sex, including being asked about their difficulties and desires.

Results showed women who had bad quality sleep were 48 per cent more likely to have a questionnaire score showing significant sexual problems.

Dr Stephanie Faubion, who directs the Mayo Clinic’s centre for women’s health, told CNN the results pointed to the importance of a good night’s sleep.

‘If you put a platter of sleep and a platter of sex in front of a tired woman, she’s going to pick the sleep every time,’ she said.

‘Sleep may be something easier to talk about, and poor sleep is associated with so many negative outcomes, such as cardiovascular disease.

‘If she’s not sleeping well that leads you to the next question, because sexual function is probably suffering too.’

‘Lack of sleep can lead to fatigue, meaning couples simply won’t have the energy to get it on that day,’ she said.

‘Instead they’d rather put their energy towards chilling out rather than spending time being a bit more active.’

She added: ‘When you are feeling tired, you’re often not feeling like your best self, meaning you’re lacking in confidence and not feeling up to it at all.’

‘Anxiety and depression, both side effects of insomnia and sleep deprivation, are known to cause sexual dysfunction for a variety of reasons, both physical and cognitive,’ she said.

‘When the body becomes stressed because of sleep difficulties, the brain suppresses the production of sex hormones like estrogen and testosterone in favour of stress hormones like cortisol.

‘This shift in hormone levels can lead to decreased sex drive, infertility or erectile dysfunction.’

A lack of sleep can also impact a man’s libido, according to a study published in the Journal of Sexual Medicine in 2019 that followed 4,000 American men and women in their 60s.

They found that testosterone levels dropped in participants due to a lack of sleep, leading to erectile dysfunction and a lack of sexual desire.

Experts say adults should aim to get between seven to nine hours sleep every night, although many struggle to hit this target.

BA, middle-aged, sleep, Who, Women
You may also like:

Hugging friends and relatives will be allowed from NEXT WEEK