Up to 1,000 Italy fans are expected to fly into London to watch the Euro 2020 final against England on Sunday after ministers relaxed restrictions to let some supporters attend.

The UK Government agreed with the Union of European Football Associations (UEFA) earlier this week that the ticketholders could go to the match at Wembley stadium without needing to self-isolate beforehand.

Tickets will be sold by the Italian football federation at £525 (€610) each and supporters will be assigned hotels and private transport.

But the easing of rules has sparked fears over an increase in the spread of Covid-19, with three Italian pundits recently testing positive for the disease. 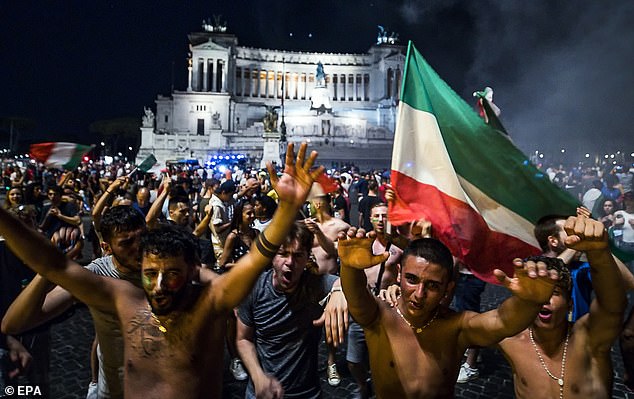 Italy fans celebrate their team’s victory in the UEFA Euro 2020 semi-final match between Italy and Spain at Piazza Venezia, Rome, on July 6 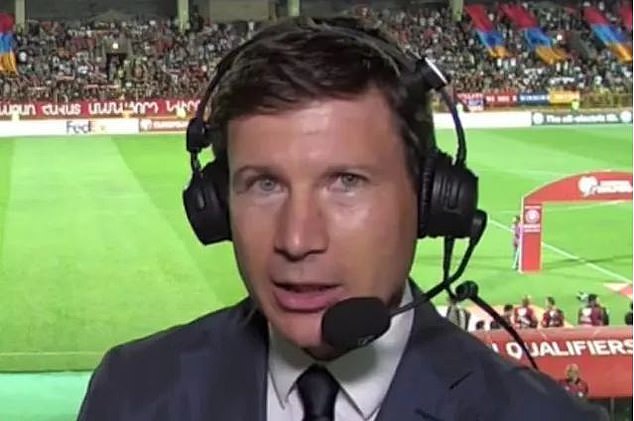 Among the three journalists who have tested positive include Alberto Rimedio (above), who will have to be replaced for the final, according to the Italian news site Ansa

VIP Italy fans attending the match will have looser restrictions and be able to spend the whole week in London, but must quarantine when not attending official Euro 2020 events, reports The Guardian.

Among the three journalists who have tested positive include Alberto Rimedio, who will have to be replaced for the final, according to the Italian news site Ansa.

The tests are said to have been carried out immediately after the semi-final between Italy and Spain, with two pundits apparently remaining in England and the third having returned to Florence.

It follows an expert saying that football fans celebrating the Euros in the UK may have been ‘an important factor’ in driving up coronavirus case numbers.

Data from England, Scotland and Wales shows an ‘obvious surge’ in case numbers starting around 10 days after the first games involving each nation, according to Paul Hunter, professor in medicine at the University of East Anglia.

He said it also showed that case numbers had begun to decline in all three countries though this was most noticeable in Wales and Scotland, both of whose teams are no longer in the tournament.

Prof Hunter said it was ‘difficult to escape the conclusion’ that revelling fans had not contributed to the rising numbers of cases.

‘It is very clear that in all three home countries the week on week rate of increase in case numbers was slowing and it did look like we may be seeing case numbers plateauing,’ he said. 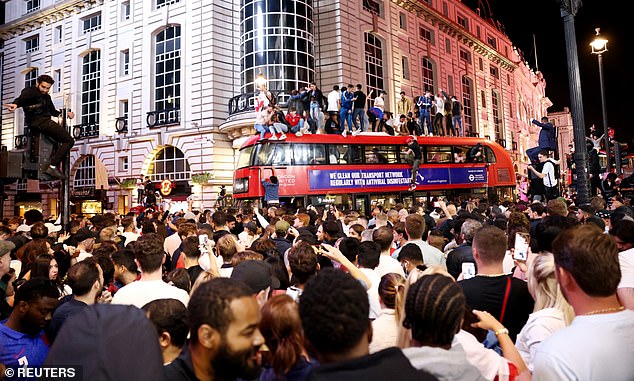 It follows an expert saying that football fans celebrating the Euros in the UK may have been ‘an important factor’ in driving up coronavirus case numbers (pictured: chaotic scenes in Piccadilly Circus after England’s victory over Denmark)

‘But in all three countries England, Scotland and Wales there was an obvious surge in case numbers starting about 10 days after that country’s first match in the Euros.

‘Whilst association does not necessarily mean causation it is difficult to escape the conclusion that celebrations around the Euros have been an important factor in driving up the epidemic in the UK.’

Prof Hunter added that cases in England had jumped up from around 32% seven days after their first match to 74% the week after.

He said similar patterns had occurred in Wales and Scotland which had also seen increases of 114% and 132% in case rates respectively in the two weeks after their first games.