Ministers today insisted France will get £54million of funding for the Channel migrant operation – blaming ‘administrative’ issues for the delay.

Despite Priti Patel threatening to withhold the money unless Paris stepped up efforts to limit the flow, security minister Damian Hinds said it will be paid ‘in the coming weeks.

He denied there was any ‘political question’ over paying the cash, insisting the ‘administrative process’ had just taken time to work through.

The emollient comments come after French interior minister Gerald Darmanin complained that ‘not one euro has been paid’ of the pledged funds.

Asked about the delay in a round of interviews this morning, Mr Hinds said: ‘Absolutely we are working closely with the French and I expect that question that you have raised to be finalised in the coming weeks.’

He told BBC News: ‘I didn’t say it was an error, it is a process to be worked through when you are transferring what are very large sums of taxpayers’ money.’

But in a warning shot at the French, Mr Hinds said: ‘I would like to see increased activity, increased turnback (of migrants). France is a safe country. If you are seeking asylum, you should claim it in the first safe country you come to.’ 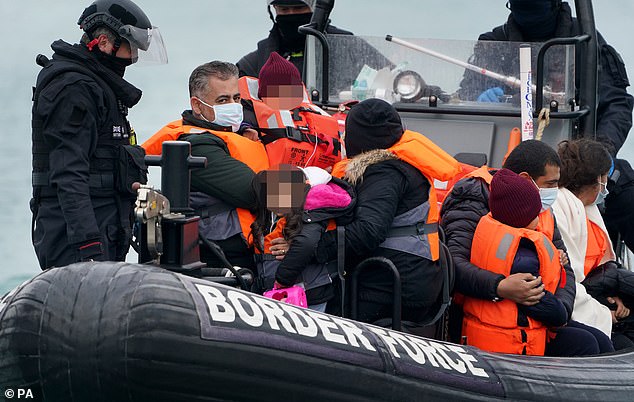 Alarm has been growing about the Channel situation, with more than 1,000 people making the dangerous trip from France to the UK in small boats in just two days last week. Pictured, Dover on Saturday 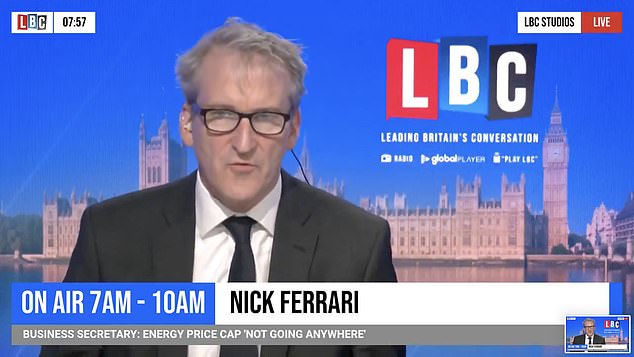 Alarm has been growing about the situation, with more than 1,000 people making the dangerous trip from France to the UK in just two days last week.

After 10 days in which no crossings were possible due to bad weather, at least 40 boats managed to reach Britain on Friday and Saturday.

Since the start of the year, more than 18,000 people are thought to have succeeded in reaching the UK on board small boats.

A flurry of crossing attempts on Friday saw 624 people reach the UK – the fourth highest daily tally on record during the current crisis.

Crossings continued on Saturday with at least 491 people, including children, arriving in Britain after making the perilous journey.

The figures were confirmed by the Home Office on Sunday morning, as the Border Force was once again active in the Channel.

More people were seen arriving in Dover on Sunday as crossings continued for a third day in a row.

A young girl wearing a pink jacket was seen being helped to put on woolly hat by a border official in the port, one of a number of children who have made the dangerous crossing in the last few days.

Thousands of people have continued to cross from France in 2021 despite the UK pledging to send millions of pounds to the French authorities to tackle the crisis. 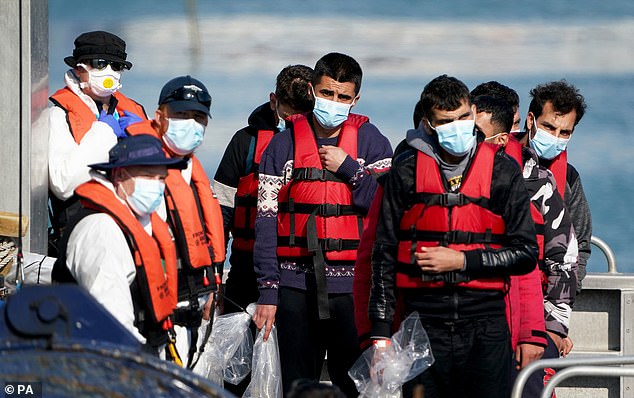 A group of migrants being brought ashore at Dover this weekend

After visiting Dunkirk on Saturday, Mr Darmanin said: ‘For now, not one euro has been paid.

‘We are asking the British to keep their promises of financing because we are holding the border for them.’

He also called on Britain to take measures to reduce its ‘attractiveness’ for migrants without residency papers, without elaborating.

Asked yesterday about Mr Darmanin’s comments, Business Secretary Kwasi Kwarteng told Sky News: ‘Well, all I can say is that we have worked very effectively with the French government so far.

‘We’ve had 300 arrests, we’ve worked with them to do that, there have been 65 convictions, and we both accept that there are something like 13,500 crossings that have been prevented through our working together, so it is a good collaborative relationship and we obviously want to improve that.’

france, Get, ministers, say, will
You may also like: