Follow
Home » World News » Minnesota rep. accused a cop who pulled him over of racially profiling

Minnesota rep. accused a cop who pulled him over of racially profiling

Bodycam footage shows Minnesota state Rep. John Thompson accusing cop of racially profiling him after he is pulled over for no front license plate and driving with a suspended license

Bodycam footage released Tuesday afternoon by the St. Paul Police Department, in Minnesota, shows state Rep. John Thompson at a traffic stop accusing a cop of pulling him over for ‘driving while black.’

The video shows St. Paul Police Sergeant Peter Crum explaining to Thompson why he stopped him, to which Thompson responds, ‘You pulled me over because you saw a black face in this car, brother.’

‘I was shocked to hear that driver accuse the sergeant of making the stop based on race,’ he wrote, ‘These aren’t accusations I take lightly, so I looked into the traffic stop, watched the body worn camera footage and spoke to the sergeant. This stop, made at about 1.20 in the morning, had absolutely nothing to do with the driver’s race. What it did involve was a public servant doing what the community asks of him . . . Simply put, the traffic stop was by the books. What happened afterwards was anything but.’

He continued, ‘I’m dismayed and disappointed by the state representative’s response to the stop. Rather than taking responsibility for his own decisions and actions, he attempted to deflect, cast aspersions and deny any wrongdoing. At the Saint Paul Police Department, we work hard to be fair, to treat everyone with respect and to lead by example. We also take responsibility for our actions. When we make mistakes, we own them and try to fix them. It’s what our community expects of its public servants. The driver, an elected official who does not dispute driving without a front license plate, owes our sergeant an apology.’

The video of the traffic stop, early on July 4, starts with St. Paul Police Sergeant Peter Crum approaching Thompson’s car and asking to see his license. As he looks it over he says, ‘Why such a hurry?’

Thompson, a Democratic–Farmer–Labor Party member in his first term, says, ‘I don’t think I took off like a bat out of hell, I just drove up.’

The lawmaker then explains to Crum that he’s a state representative in the district, but Crum notes that he has a Wisconsin license. 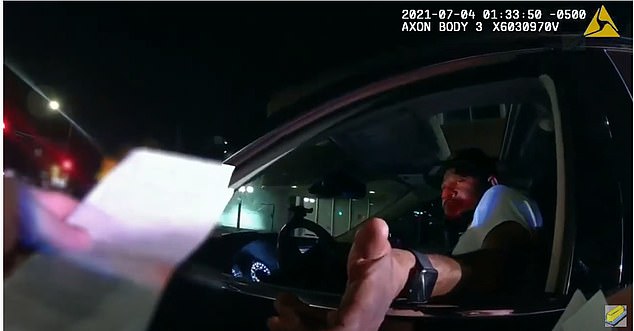 Bodycam footage released Tuesday afternoon by the St. Paul Police Department, in Minnesota, shows state Rep. John Thompson at a traffic stop accusing a cop of pulling him over for ‘driving while black’ 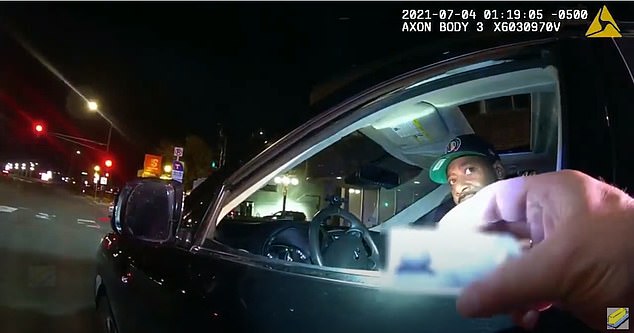 However, Thompson was driving with a suspended license from Wisconsin

Crum goes back to his car where he appears to use Thompson’s license to look up information on a laptop, then he seems to start writing him a ticket.

After about 10 minutes, Crum returns to Thompson and tells him that his license is coming up as suspended in Minnesota. Thompson refutes the claim and Crum tells him if that’s wrong, he could contest it with the Department of Vehicle Services.

Thompson then asks why he was pulled over and Crum says, ‘No front plate and then the way you took off.’

Thompson says, ‘I’m too old to be running from the police. You profiled me because you looked me dead in the face and I got a ticket for driving while black . . . There’s no way in hell I’m taking off with you behind me. You looked in this car and busted a U-turn and that’s the reason why —’

But Thompson continues and says, ‘I know. But what I’m saying is what you’re doing is wrong to black men and you need to stop that. Stop racially profiling black men in their car.’ 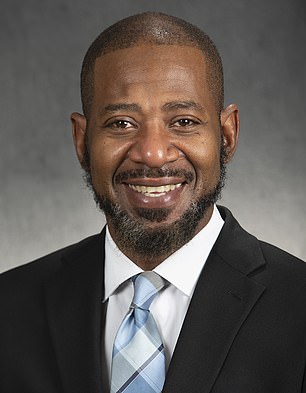 This is Rep. John Thompson’s first term representing the state of Minnesota’s District 67A, as a member of the Democratic-Farmer-Laborer party

The two continue to argue as Crum insists that he wasn’t racially profiling Thompson before wishing him a good night and heading back to his car.

Three days after Axtell’s post, Thompson addressed the incident on his own Facebook page and said he supports the release of the bodycam footage. He didn’t offer an apology, but noted that the officer was acting by the book albeit adding, ‘we need to rewrite the book.’

He wrote, ‘I was pulled over in what is referred to as a pretextual traffic stop. The same type of stop that led to the killing of Philando [Castile], as well as Daunte Wright this April. Pretextual stops have been shown to not only do little to stop serious crimes, but they also disproportionately target non-whites. This was the racial profiling I spoke to, and I’ve been working to get rid of these types of stops long before this summer.’ 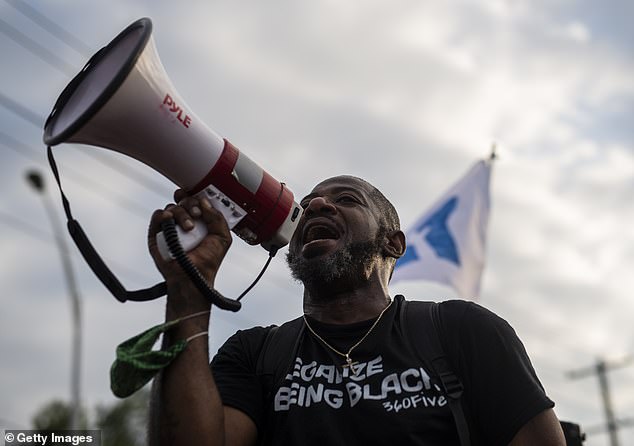 Thompson is a vocal support of the Black Lives Matter movement and was a close friend of Philando Castile, who was shot seven times by a cop during traffic stop on July 6, 2016, after the cop claimed Castile was reaching for a gun. He is above at a rally commemorating Castile last year on July 6 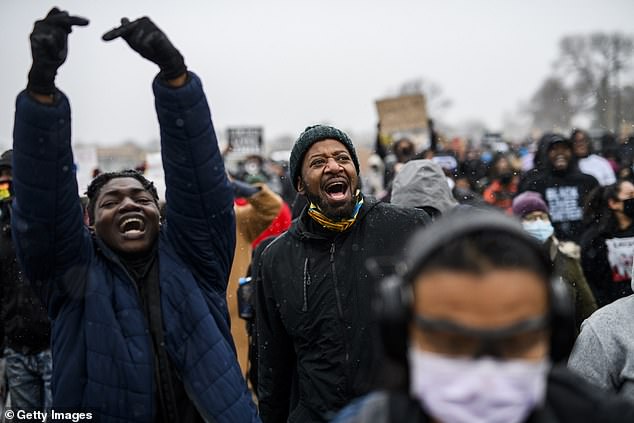 Thompson was at a protest outside the Brooklyn Center police headquarters on April 13, 2021, in Brooklyn Center, Minnesota, after Duante Wright was shot and killed during a traffic stop two days earlier

Thompson also addressed the claims brought against him about the reason for his traffic stop and wrote, ‘While all of these have relatively simple explanations, I take responsibility for my fault in not addressing these issues and allowing them to eclipse the hard-fought work done in the name of police reform.’

He added, ‘I was able to drive away from this interaction while other Black Minnesotans, in very similar situations, have not . . . I believe these pretextual stops are part of structures that operate to restrict access to jobs and housing, lock us up, and publicly humiliate Black, Indigenous, and communities of color.’

Thompson ended up not being ticketed for the missing front plate or speeding, but Sergeant Crum instead issued him a citation for the suspended license.

According to records viewed by CBS Minnesota, Thompson never had a driver’s license issued by Minnesota. His Wisconsin license was revoked on April 21, 2019, after he allegedly failed to pay child support in Ramsey County.

In a statement published Monday, Thompson said he was renewing his Wisconsin license because he thought he would need to return there eventually to provide care to someone. He took care of the child support issue and his license was reinstated last Wednesday.

However, the address he gave Crum, also listed on his July 4 ticket, is in St. Paul but not in District 67A, which he represents.

When Thompson ran for office in May 2020, he checked a privacy box under his address on a candidacy form. While the Minnesota Secretary of State’s Office confirmed that Thompson later provided a St. Paul address inside District 67A, it is unclear if he lives there now. This would mean that his name could be kept off the ballot in 2022 unless he moves into the district.

Following the traffic stop, the Minnesota Police and Peace Officers Association asked Wisconsin’s attorney general for an investigation and said Thompson had either ‘defrauded the state of Wisconsin’ or defrauded his constituents in the state of Minnesota, according to CBS Minnesota.

House Speaker Melissa Hortman said in a statement that she will be investigating the allegations against Thompson with the help of the Minnesota House legal counsel.

a, accused, cop, Minnesota, rep, W
You may also like: