As the trial of the Mexican national accused of murdering 20-year-old Iowa college student Mollie Tibbetts in 2018 continued into its second day Thursday, prosecutors called law enforcement officials to the stand and key surveillance video was unveiled, showing Tibbets running through a neighborhood as a vehicle allegedly operated by the defendant followed.

The defense for 26-year-old Cristhian Bahena Rivera, who was working as a farmhand under an alias and living in the country illegally, tried to cast suspicion on others who had initially come under scrutiny, including Tibbetts’ boyfriend, Dalton Jack, and residents living on a property in Brooklyn, Iowa, near where Tibbett’s body was eventually discovered.

But law enforcement officers insist that those individuals have been cleared and prosecutors argue that new evidence, including video of Rivera’s Chevy Malibu, blood found in its trunk – that was later a match for Tibbetts – and a partial confession by the defendant will be crucial in proving his guilt.

Jurors were shown several videos and photos of the runner and the Malibu, including some that were enhanced in size.

Deputy Steve Kivi, an investigator with the Poweshiek County Sheriff’s Department, testified Thursday at the Scott County Courthouse in Davenport that he was among the officers who responded to the home of Dalton Jack and his brother, Blake Jack, after Tibbetts was initially reported missing.

She had been staying at the brothers’ home to look after their dog while they were allegedly away working separate construction jobs. Tibbetts, an avid runner, went for her routine run the evening of July 18, 2018 and never returned.

Iowa Division of Criminal Investigation agent Derek Riessen testified that on Aug. 14, 2018 he collected surveillance video from several homes, including homeowner Logan Collins, as part of a citywide canvass. He said his team immediately began reviewing the footage and that the next day a fellow agent said he believed he saw something significant.

The footage showed a person appearing to run through the neighborhood in the distance, entering and leaving the video frame in a split second. Riessen said he determined it was a runner who appeared to have a ponytail and was passing by at 7:45 p.m. 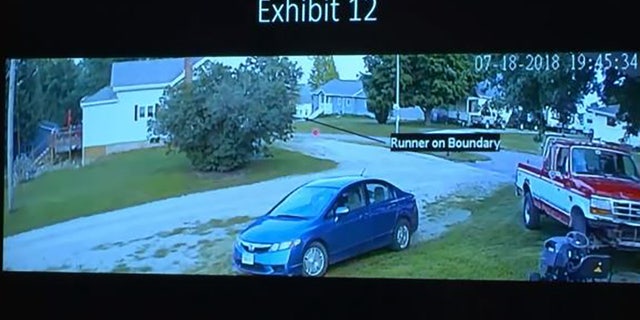 In an enhanced image taken from a homeowner’s surveillance footage, a jogger can be seen running in the distance for a split second, investigators say. A still of the video was show as an exhibit in court during the trial for Cristhian Bahena Rivera, accused on murdering Mollie Tibbetts on her routine run.
(Court TV)

About 20 seconds later, a black Chevy Malibu with distinctive chrome rims, door handles and a mirror drove past. Riessen said that vehicle is seen several times over the next 20 minutes, ultimately going back toward the direction of the runner at a higher rate of speed at 8:07 p.m. He said that Tibbetts is suspected to have been abducted on a rural road about 2 miles away around 8:20 p.m.

Riessen said neither the driver nor the license plate could be identified on the video.

Kivi reviewed the video lead on Aug. 15, 2018 and he said the very next day he spotted the black Chevy Malibu – with chrome mirrors and handles – just outside of Brooklyn getting off Interstate 80. He followed the driver, Rivera.

Kivi approached Rivera, who gave him his birth certificate as identification and his cellphone number and provided his employer, Yarabee Farms, as his address. Kivi described Rivera as polite during their initial exchange that day, calmly denying knowing anything about what happened to Tibbetts.

“I got out and the driver was already out of the vehicle. So I said, ‘Hey, can I talk to you for a second?’ And he turned around and I tried to communicate with him,” Kivi told the court Thursday. “It became pretty obvious quickly that he didn’t speak English, but there happened to be some older gentleman in the yard nearby that walked over and said he could help us communicate.”

He took a picture of Rivera and the car, but did not search the vehicle and only peered inside.

Rivera was brought in for questioning a few days later, on Aug. 20, 2018, and an interrogation that lasted several hours led law enforcement members to the property where Tibbett’s body was ultimately found on Aug. 21, 2018. A judge ruled that statements Rivera made during the interrogation cannot be used at the trial because an officer failed to read him his complete Miranda rights.

Poweshiek County Attorney Bart Klaver later asked Kivi about those statements. Kivi said he remembered being called at home after 9 p.m. by his chief deputy to get back into work because Rivera had some “interesting things to say” and they all later drove down to the property together the next day.

“After a search of the cornfield, we found human remains that appeared to be deliberately covered by cornstalk and cornfield. And those remains were eventually positively identified as Mollie Tibbetts,” Kivi said.

Rivera allegedly made additional incriminating statements at the scene that can be used, including that he had approached Tibbetts while she ran, fought with her after she threatened to call police, and remembered driving to the field where he left her bloody body.

An autopsy found Tibbetts had been stabbed from seven to 12 times in the chest, ribs, neck and skull, and that she died from sharp force injuries.

ho, key, Mollie, Murder, Tibbetts'
You may also like: