A passenger captured the moment a Yellowstone National Park ranger shot at a grizzly bear as it charged toward him and a road filled with cars, the latest of several close encounters with a grizzly at the Wyoming park this month.

The footage of the Friday afternoon incident, just south of Roaring Mountain and north of the Norris Geyser Basin, was uploaded to YouTube on Monday by user named Jaydog R.

A park ranger is shown directing Wyoming traffic before being taken by surprise by  a grizzly bear. 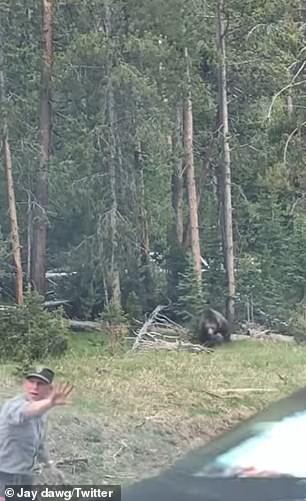 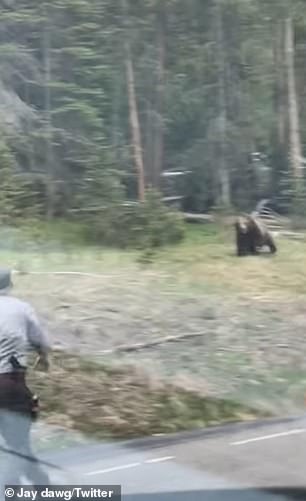 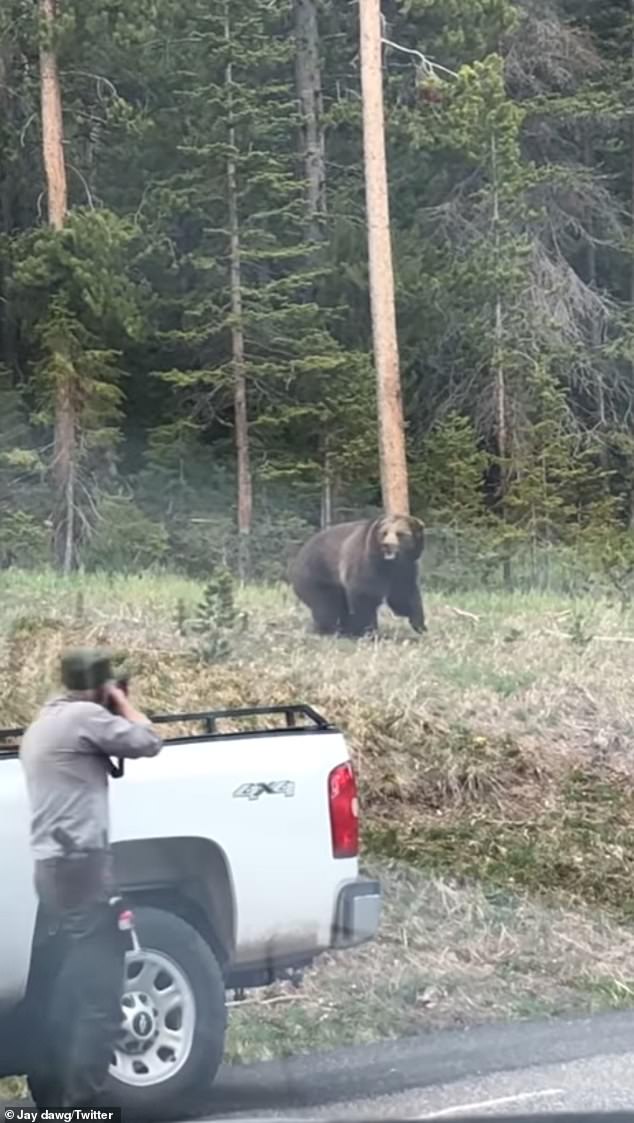 The bear charges suddenly at the ranger who was standing by the side of the road.

He takes cover behind his truck, then starts shooting what are believed to be blanks at the bear. Once the grizzly hears the loud shots, it turns around and runs into the woods.

The ranger continued shooting into the air even after the bear was gone.

Photographer Deby Dixon told USAToday.com she obtained information from a Yellowstone bear manager, and posted the video of the incident on her Facebook page.

‘This is why visitors should maintain their distance from the bears,’ she wrote. ‘This guy meant business!’ 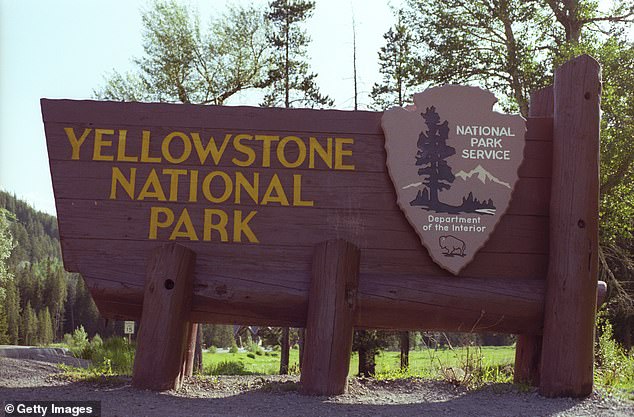 Dixon said she was told park visitors make the situation worse by getting too close to the bears, who are all over the national park feeding in the meadows. They occasionally cross the packed roads.

Park regulations state that visitors should keep a minimum 100-yard distance from bears at all times and never feed or approach them to take a photo.

Dixon posted on Facebook that the grizzly captured on footage had been chasing a female bear.

‘This boar (male bear) had been following a girl around all day, in Yellowstone, and was reported to have charged about 6 cars throughout the day when people blocked the bear’s path,’ she wrote. ‘Apparently, the sow (female bear)  would cross the road and then people would pull their car up in front of the boar to get photos, blocking him from reuniting with his girlfriend.’

‘As you can see, getting between a grizzly and what he wants can be bad news,’ she added. ‘Even after this boar charged the ranger, several visitors and photographers were standing along the road, watching the sow leave, despite not knowing where the boar had gone.’

The incident occurred the same day a 39-year-old man was seriously injured by a grizzly bear while hiking alone on a trail near Mammoth Hot Springs.

The hiker encountered two grizzly bears and one attacked him, causing serious injuries to his lower extremities, USAtoday.com reported.

The man was able to hike out on his own and was taken to a local hospital by ambulance.

Earlier this month Yellow Stone National Park launched an investigation into a woman caught on footage getting too close for comfort to a sow and her two cubs near the Roaring Mountain parking lot.

The mother bear chases off the woman, who says, ‘Oh my, god, Oh my, god,’ before taking off nervously, News18.com reported.

a, moment, park, rang, Yellowstone
You may also like: