Police are hunting a dognapping gang after CCTV captured the moment two black Labradors were stolen from outside a Marks & Spencer’s store.

Owners Charlotte and Dale Robson have been left heartbroken after Denzel and Welly were taken from outside the store in Nantwich, Cheshire, on Saturday evening.

The dogs – one wearing a blue collar and the other wearing a grey or silver collar – had been tethered outside the Market Street shop when thieves struck at around 6.10pm. 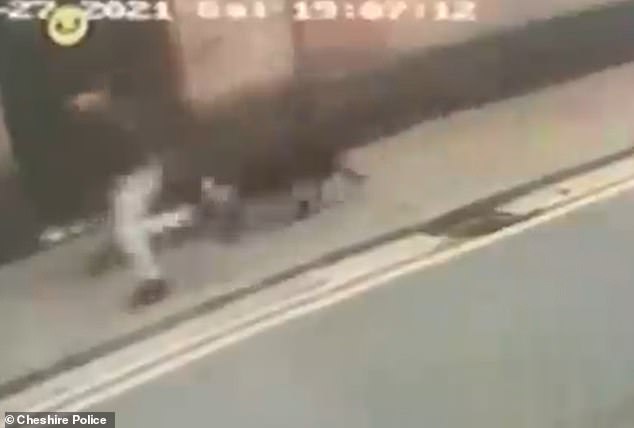 CCTV captured the moment Denzel and Welly were led away from the store in Nantwich, Cheshire, on Saturday evening

CCTV footage shared on social media shows two men with the dogs running away from the town centre. It is believed they were heading towards Queens Drive.

They are both white, have average builds and short dark hair and were wearing dark footwear.

The man holding the dogs’ leads was wearing a dark jacket and light jogging bottoms.

And the man running in front of him had a black jacket and dark pants or jeans on. He was carrying a dark bag.

Police are also keen for anyone with CCTV or a dashcam fitted to their car to come forward. 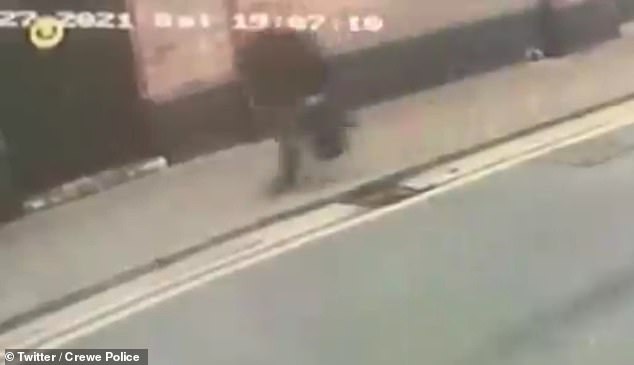 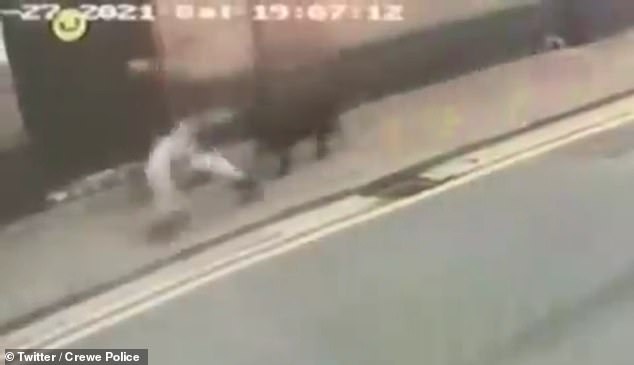 Moments later, the man holding the dogs’ leads runs along the street while  wearing a dark jacket and light jogging bottoms

A ‘suspicious’ old white transit van has also been sighted in the area although it is not clear at this stage whether this is connected to the incident.

Mr and Mrs Robson have now launched a desperate appeal for the safe return of their ‘beloved family pets’.

Mr Robson said: ‘They are both castrated and will not be able to be used as breeding dogs. They are family dogs and belong here with their family.

They are eight and and seven-and-a-half-years old. 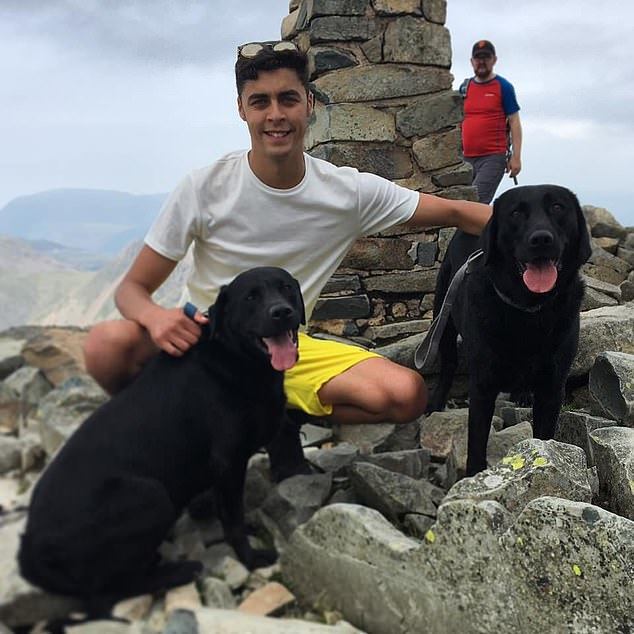 The couple have now launched a desperate appeal for the safe return of their ‘beloved family pets’. Pictured: Mr Robson pictured with the two missing labradors, Denzel and Welly 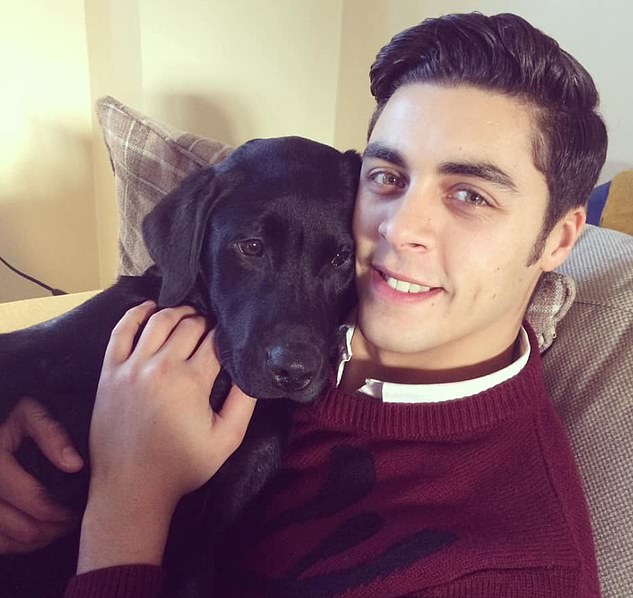 A dedicated Facebook page has been set up to help find the pooches. Pictured: Mr Robson with one of the dogs

‘We are devastated and we have two daughters that are going to be heartbroken.

‘We just want them back – no questions will be asked.

‘Denzel will be barking if he is somewhere he doesn’t want to be.

Welly will be shaking scared. Please keep an ear out for excessive barking as well as an eye out for them.’

The appeal has since been shared thousands of times.

Residents have also been helping with the search and checking CCTV. A dedicated Facebook page has also been set up. 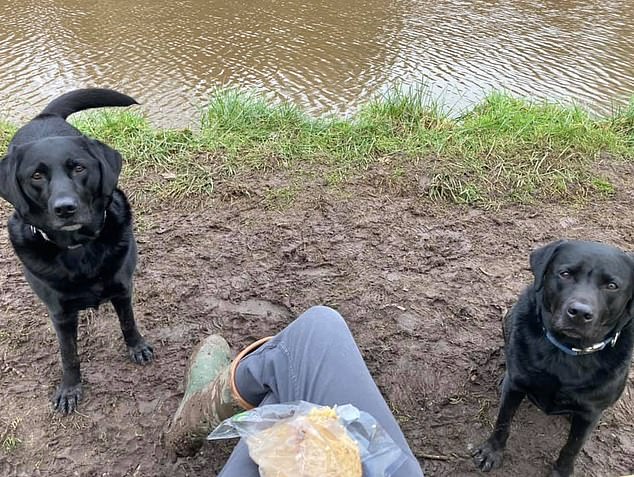 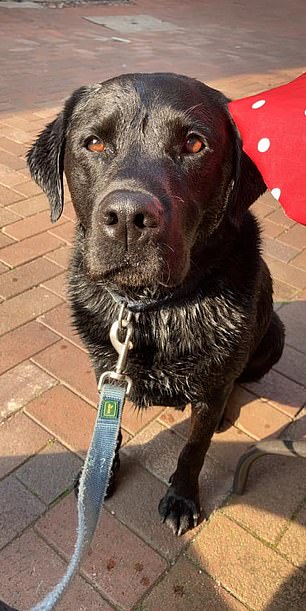 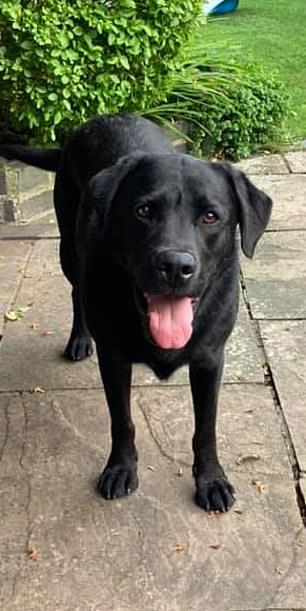 The Robsons added: ‘We always like to see the good in this world and the sense of community we have felt has kept us going beyond belief.

‘Men like this don’t deserve the good and I hope there is at least one teeny part of them that is full of regret for tearing a family apart.’

‘Pets are part of the family and having them stolen is a harrowing and distressing experience.

‘I would like to reassure members of the community that we take incidents of this nature extremely seriously and are doing all we can to establish who stole the dogs, make them face the consequences of their actions and have the pets returned to their rightful owner. 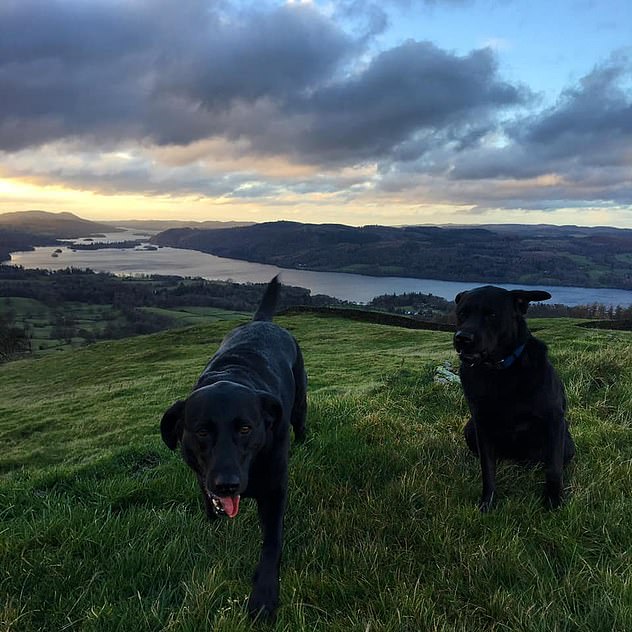 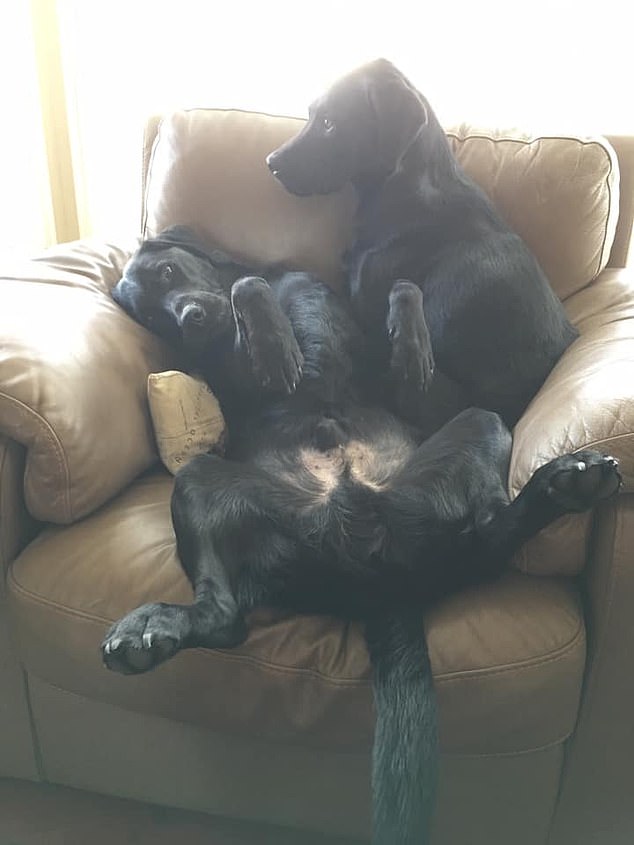 The owner added that the family dogs were used to ‘home comforts, cuddles and playing with our daughters’

‘Inquiries are ongoing and I urge anyone who believes they may know the identities of the men in the CCTV footage to get in touch.

‘You cannot see their faces clearly in the footage but we are hoping that some members of the public may recognise them from their builds, the clothes they were wearing and the way they run.

‘We also want to hear from anyone who witnessed the dogs being stolen or has any other information that may aid our investigation.

‘Perhaps you think you know where the dogs are, or have CCTV or dashcam footage that may be relevant to the investigation.’

Anyone with information or footage is asked to call Cheshire Constabulary on 101, quoting incident number 21000195850.

Alternatively, information can be reported to Crimestoppers anonymously on 0800 555 111.