At least it was a soft landing! Nerve-wracking moment paraglider’s parachute collapses sending him plunging into the lake below

This is the terrifying moment an experienced paraglider was sent plummeting into a lake when his parachute collapsed.

Athlete Roman Rohrmoser, 36, was trying to pull off a manoeuvre known as a full stall over Achen Lake in his native Austria.

But as he tried out the acrobatic trick, his parachute became twisted and he quickly began to lose control.

Unable to recover in time, Roman was left to plunge downwards at speed, capturing all on the cameras attached to his equipment.

Luckily he was practising over the popular tourist lake and so was able to land safely in the water below, avoiding any injuries.

Within seconds of landing a boat can be seen at his side.

‘It was a full stall gone wrong,’ said Roman, describing the manoeuvre which involves showing down the paraglider to reset its position.

He continued: ‘The paraglider started to twist and got out of control.

‘This had never happened before previously, but I never tried to get into such a situation. I hoped for the best! 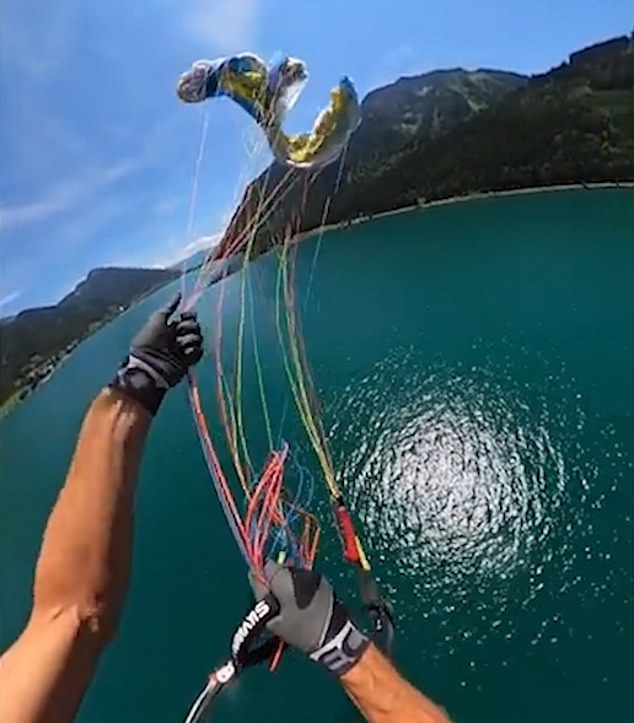 This is the terrifying moment athlete Roman Rohrmoser, 36, watched his parachute spiral out of control in front of him after a manoeuvre went wrong over a lake in Austria

‘I kept calm and did what I had to do. Just wait for it and see what the chute does.

‘I had to throw the rescue chute and landed in the water, where a boat was there within seconds to help me out.’

He added: ‘It normally doesn’t happen during a normal flight, it’s a rescue move if the chute gets knotted. 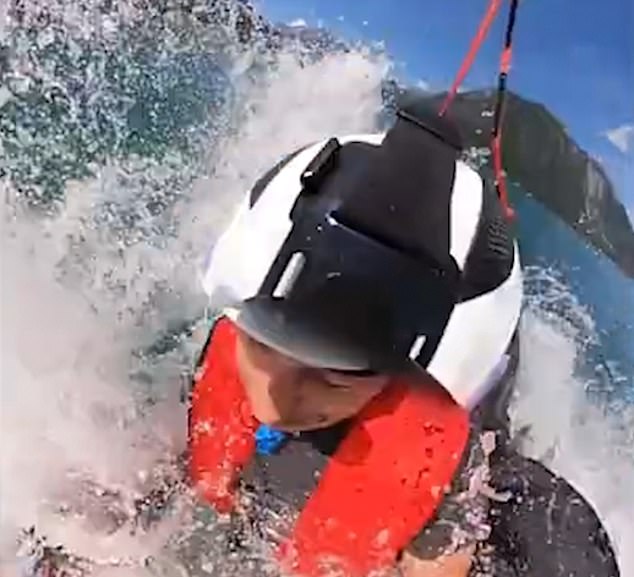 But as he tried out the acrobatic trick, his paraglider became twisted and he quickly began to lose control. Unable to recover in time, Roman was left to plunge downwards at speed

‘So before you throw the rescue chute, you try that manoeuvre. But it’s not that easy, especially with a lot of wind like I had that day.

‘So you stall the wing, until it collapses and then open up slowly, but I stalled it too long and then my left arm couldn’t handle it and it shot up. I got twisted and things went the way they went!

‘Somehow I managed to keep it together and made the best out of it and it turned out fine. A few seconds later and I would have thrown the rescue chute.

‘I have to say it looks more comfortable on camera than it really was, I think my heart rate was at 200 beats! But it was fun and I learned a lot.’ 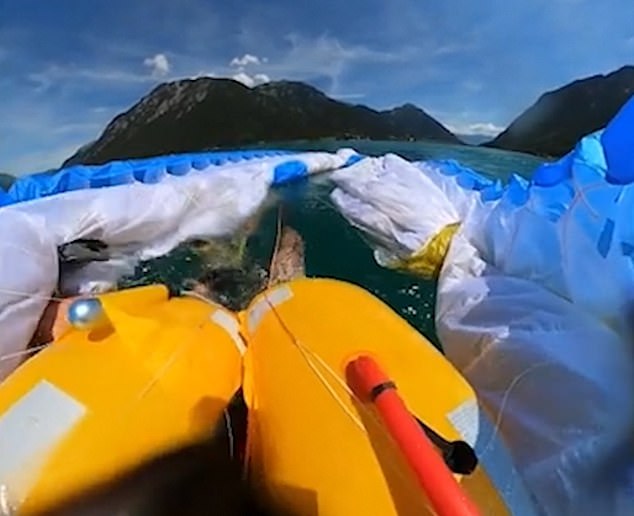 Luckily he was practising over the popular tourist lake and so was able to land safely in the water below, avoiding any injuries. Within seconds of landing a boat can be seen at his side

Native to Austria, he has been skiing since he was just two years old and says he feels most at home in the mountains.

In childhood he competed in national and international Alpine competitions, but now prefers freeriding.

Since 2015, he has also been a bike guide in the Zillertal Alps in Austria and organises annual bike camps for trail riders.