This is the moment a furious woman tried to drag an eco activist out of the roads as raging drivers beeped their horns as Just Stop Oil staged their latest sit-down protest.

The eco zealots are back again for their 30th consecutive day of protesting as they blocked traffic by sitting in two roads in east London.

The disruptive activists were seen sitting, this time, on Commercial Street and Hanbury Street.

Drivers angrily remonstrated with them and tried to pull them out of the way, and one woman shouted that she had a sick child in her car before police arrived at the scene.

One man was seen kicking the Just Stop Oil banner away in frustration before narrowly evading them with his car as he drove through the blockade. 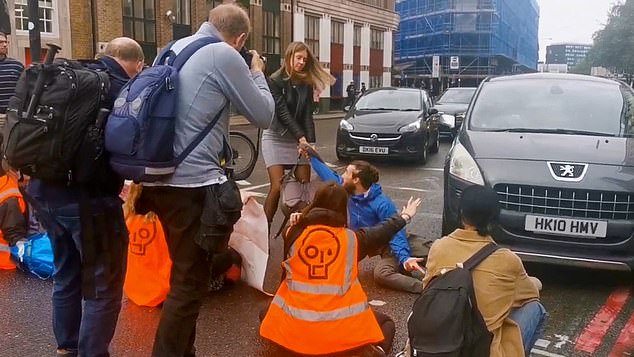 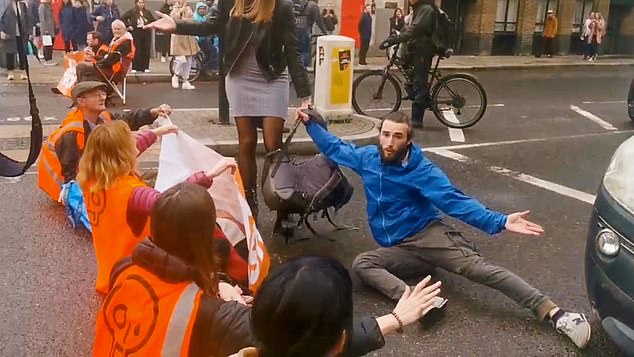 Just Stop Oil said on Twitter: ‘From 12.15pm today, 15 Just Stop Oil supporters have blocked Commerical Street by Spitalfields Market in London. They are demanding that the government halts all new oil and gas licences.’

Hazel Agombar, 53, a mother of three and charity worker from Winchester said: ‘I’ve spent 15 years ‘soft’ campaigning on the climate crisis. I’ve got to the point now where I feel driven to take direct action.

‘I would never have believed that I – a quiet middle age woman – would find myself preparing for action that will likely lead to my arrest. But the time has arrived. The situation is so serious. ‘

Yesterday, tensions flared on the 29th consecutive day of Just Stop Oil demonstrations in London, with fed-up commuters pleading with ‘pathetic’ activists to put an end to the chaos.

Some glued their hands to the tarmac while others locked on to one another – sparking concerns of traffic chaos.

At the Kennington demonstration, frustrated motorists dragged protesters off the road in an attempt to make enough room for traffic to flow freely. 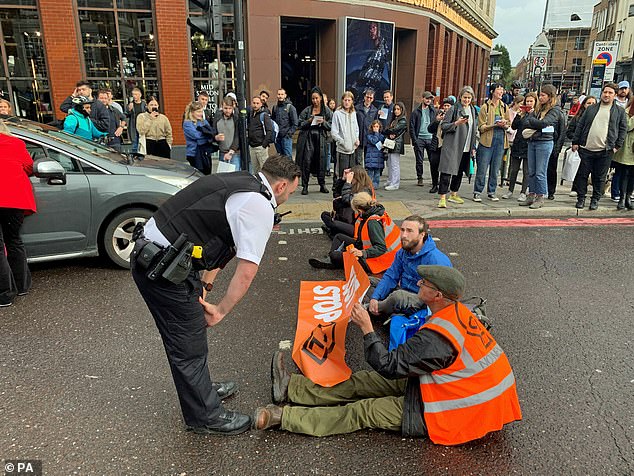 Drivers angrily remonstrated with them and tried to pull them out of the way, and one woman shouted that she had a sick child in her car before police arrived at the scene 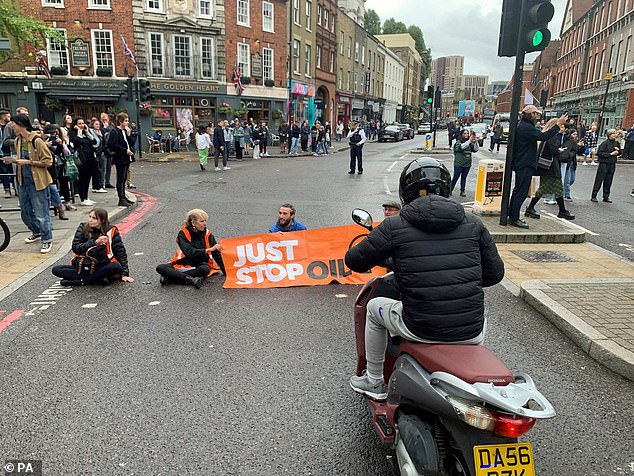 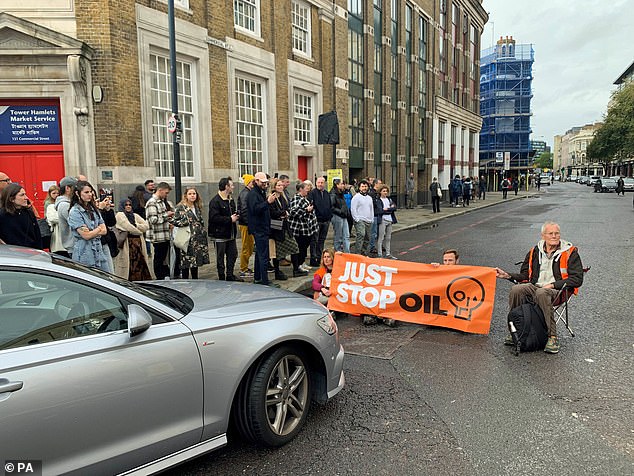 ‘This is f**king pathetic,’ one person said as he dragged people out of the way.

‘I’ve asked you nicely. There’s people trying to go about their business. For the last time, move.’

Another motorist threatened to ‘crack someone in their f**king face’ if they didn’t move out of the way of his car.

Every time a protester is forcibly dragged from their position on the street, they scurry back to the line at the earliest possible opportunity, sparking mass frustration amongst people unwittingly caught in the chaos.

The latest protest comes amid a month of chaos in London and the wider United Kingdom due to repeated Just Stop Oil demonstrations.

On Friday, two Just Stop Oil activists were arrested after spraying orange paint across a Rolex store in Knightsbridge.

More than 600 activists have been arrested so far in October following a host of stunts, from throwing soup at Van Gogh’s Sunflowers, to scaling the QE2 Bridge and causing more than a dozen major roadblocks.