Monty’s last dance tells us about his home – and ours

He danced as if there were no tomorrow. His legs pumped and his arms whirled. His body jerked and he seemed unable to stop.

The people of the little town of Heywood in far south-west Victoria turned out to watch this wild show in their main street, hooting and laughing and urging the dancer on. 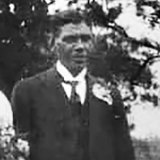 Monty Foster at a family wedding.

I was a mere child on that day in the 1950s, in town with my Dad for supplies, but the sight of this man’s abandon never left me.

I was frightened and saddened, for I looked at the dancer’s face and saw that his wide fixed smile held no humour. I would come to understand over the years that it was no more than a rictus: a crazed spasm of the facial muscles. His eyes brought to mind those of a terrified horse.

Children, their senses not yet worn down by the passing of years, see things that are lost on adults, but I was left wondering for decades whether my memory of this black man’s dance in the street was a delusion.

He was known as Monty Foster. I remembered him again this week when descendants of his extended family held a smoking ceremony on a beach near Portland, 20 kilometres south of Heywood. They called it Invasion Day.

For Monty and his family, I thought, invasion wasn’t so long ago as 1788 – the invasion that killed him, its consequences spinning through generations, happened during my own lifetime.

Foster was an Indigenous man from the Lake Condah Mission, amid the stone country known these days as the Budj Bim World Heritage site, where Aboriginal people established the world’s first eel-trapping aquaculture system at least 6800 years ago.

He sometimes caught eels in a creek among the stones and brought them to the Heywood pub to sell, and he trapped rabbits for their meat and sold their pelts stretched on wire.

He split posts and built fences for farmers. He had been a champion runner until a block of wood he was splitting ripped open his leg. He treated the wound the old way, letting maggots clean out the infection.

He followed the shows, too, and boxed in the tents, standing on the board by the big bass drum, daring all comers.

But then, one winter’s day in 1954, a policeman drove out to the mission and met two of Monty’s daughters, Gloria, 13, and Eunice, nine, as they walked home from their bush school.

The girls were ordered into the police car and the officer set to hunting down their little brother, Ronnie, aged six.

As word spread around the mission, one of the children’s numerous aunts hid the child under her bed until, according to Eunice, the policeman threatened the woman that if she did not hand over Ronnie, her own children would be removed. 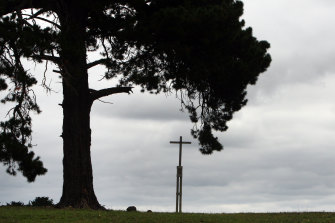 A cross stands on the site of the Lake Condah Mission’s church, destroyed in 1957. Credit:Leanne Pickett

The three Foster children were taken to Heywood and spent the night in a police cell before facing the magistrate’s court, charged with being neglected.

The authorities had chosen their moment.

The children’s mother, Lyall Foster, was away in Hamilton, being treated for tuberculosis. Their father, Monty, was rabbiting on a property at Yambuk, near Port Fairy.

The extended family – Saunders, Kings, Lovetts, Ardens and others – filled the courtroom, aunties insisting that the children were receiving proper care and would continue to receive it.

Uncles stood along the walls, offering support, the Lovett men dressed in the military uniforms they had famously worn to the Western Front and Palestine during World War I and on the battlefields of World War II.

But the ruling was inevitable. Officialdom was trying to remove the last residents from the Lake Condah Mission. It was supposed to have been closed since 1918, but several Indigenous families – with nowhere else to go – had continued occupying the old place.

A surefire way to break a family’s spirit was to take the children.

Guarded by a policewoman, the Foster children were bundled off to the Hamilton police station and then to Melbourne’s Royal Park Receiving Centre for Children, where the girls were split from their brother. Eventually they were all assigned to a large orphanage in Ballarat.

Relatives had sent an urgent message to Monty, but by the time he reached Heywood the court was adjourned. His children were gone.

Over the next couple of years, whenever he could raise a bit of cash, he took to hitch-hiking to Ballarat and bringing them little gifts. But he could never persuade the authorities to release his family.

His wife, Lyall, could not bear to return to the emptiness of the family’s lodging at Lake Condah, moving away to Melbourne.

And then, one day in 1957 or ’58, I was among the people of Heywood who watched Monty Foster’s final, desperate dance.

If he appeared crazed, it was because that is what he had become. He was dancing as if there were no tomorrow because for him, there really was no tomorrow.

Though the memory of it followed me from childhood into adulthood, I did not know for many years what had become of Monty Foster.

His daughter, Eunice, learned it all too well, and wanted the world to know. She shared it with her own children and with the researchers who compiled the Bringing Them Home report of 1997 that began opening Australian eyes to the tragedy that was the policy of removing Indigenous children from their families. 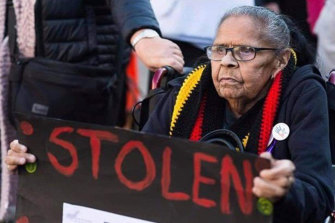 Eunice Wright, daughter of Monty Foster, on the steps of Parliament House in 2019.

The loss of his children was too much for Monty Foster. His dance in the street was that of a man suffering a massive emotional breakdown.

He was transported to the psychiatric ward of Prince Henry’s Hospital, which stood in Melbourne’s St Kilda Road until 1991. There he was placed in a padded cell.

Later this man who had laboured hard and fought in the tents was moved to what was known at the time as the Kew Mental Hospital.

Foster died there in January 1959. His death certificate, his family discovered much later, showed he had died of “malnutrition and bed sores”. He had no real rights to the end: because he had been born Aboriginal, he was still officially a ward of a paternalistic state. He was 53.

The fates, however, were not finished with him.

The hospital did not bother informing his wife, Lyall, or anyone in the extended family, though Lyall had left a phone number for emergencies. Foster was buried in a pauper’s grave, with no one from his people to send him on his way.

The children were released from the Ballarat Orphanage when, one by one, they reached the age of 15. They drifted apart.

Eunice, however, reunited with her mother.

Within a few years, she met the man who would become her husband, Jimmy Wright, an Indigenous man from up Sydney way who had come south labouring. They set about building a life and a family together and eventually would have four children, 14 grandchildren and 20 great-grandchildren. 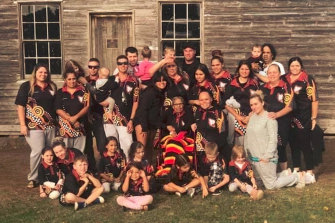 Eunice Wright (centre, with red, yellow and black blanket on her knees) and her mob outside her childhood dormitory at the Lake Condah Mission. “Her family was her world,” her daughter Tina says.

Eunice was so protective of her children, and so suspicious of authority figures, that her family remembered her reluctance to even allow a doctor near them.

Robbed of her own childhood, at the age of 40 she became a childcare worker and for 12 years was employed in the Yappera Children’s Service Co-Operative, in the Melbourne suburb of Thornbury.

All the while, her country called to her. Jimmy and Eunice eventually bought a house in Branxholme, not far from the old Condah Mission.

But neither could shake the vision of Monty lying in a pauper’s grave far away.

In the early 1990s they took a bank loan, had Monty’s remains disinterred, and brought him back to the old mission.

Charles Montgomery Foster – for that was his full name – finally had a proper grave in the Lake Condah Mission Cemetery.

Monty’s wife, Lyall, died days later, and lies beside him in the cemetery. Their headstones reveal they shared a date till the end; both died on January 22 – Monty in 1959, Lyall in 1992.

“My mother waited for my father to come home to his country,” Eunice told anyone listening. 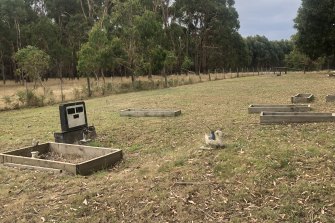 The headstone of Monty and Lyall Foster stands among unmarked graves at the Lake Condah Mission Cemetery.Credit:Tony Wright

Eunice Ina Wright, one of the Foster kids, died last year, in March. She was given a memorial service at the old Lake Condah Mission. It was held on the empty ground where once stood a stone church that had held the community together.

In 1957 the authorities, sick of trying to remove the last families from the mission, had accomplished the task by bringing in a contractor who used 13 sticks of dynamite to destroy the church.

ab, dance, last, Monty’s, tells, Us
You may also like: