Washington: Jeff Bezos’ Blue Origin space company has pressed its campaign to win a slice of NASA’s lucrative lunar lander contract, filing a suit in federal court in an attempt to force NASA to fund a second spacecraft to ferry astronauts to and from the lunar surface.

The suit, filed in the Court of Federal Claims on Tuesday AEST, comes about two weeks after the US Government Accountability Office rebuffed Blue Origin’s protest of the NASA decision to award the $US2.9 billion ($3.96 billion) contract to develop the so-called Human Landing System solely to Elon Musk’s SpaceX. 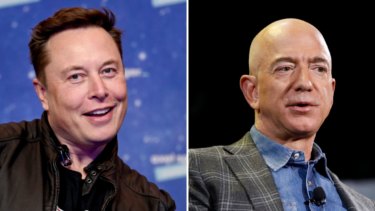 Destination: moon – via a courtroom. Elon Musk and Jeff Bezos.

In a statement, Blue Origin said it was “an attempt to remedy the flaws in the acquisition process found in NASA’s Human Landing System. We firmly believe that the issues identified in this procurement and its outcomes must be addressed to restore fairness, create competition, and ensure a safe return to the Moon for America.”

The contract is one of the most significant NASA programs in some time and has been a target for Blue Origin for years. In 2017, before there was even a formal request for proposals, the company pitched NASA on a lunar lander for cargo.

Blue Origin subsequently teamed up with Lockheed Martin, Northrop Grumman and Draper, traditional players in the American defence business, to bid for the program. And last year NASA awarded the Blue Origin-led team the biggest award in the initial phase of contracts. 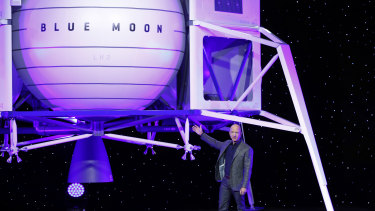 Jeff Bezos in front of a model of Blue Origin’s Blue Moon lunar lander on Thursday.Credit:AP

But in April, NASA selected a single winner, SpaceX, to develop the spacecraft for what would be the first human landing on the moon since the last Apollo mission, in 1972. Given the funding for the initial round, the award was considered a major upset.

SpaceX has proved itself to be one of NASA’s most trusted partners, flying three crews of astronauts to the International Space Station, for example, when the other participant in that program, Boeing, has stumbled badly. And its bid for the lunar landing contract was half Blue Origin’s $US6 billion offering.

Since then, Blue Origin has tried every lever at its disposal – lobbying Congress, filing the suits and waging a public relations war – to overturn the SpaceX award.

Blue Origin has claimed that SpaceX’s Starship spacecraft that would become the lunar lander is an “immensely complex and high risk” path for NASA to take since it would involve as many as 16 flights to fully fuel the spacecraft for a lunar landing.

Many in the space community have bristled at that bare-knuckles approach, especially since it was aimed at SpaceX, which has won legions of fans for its success in creating a reliable transportation network to space.

Blue Origin, by contrast, has never flown to orbit, and the engines it is developing for that rocket, known as New Glenn, are behind schedule.

Musk has pushed back against Blue Origin’s claims about Starship’s complexity, writing on Twitter that “16 flights is extremely unlikely.”

The maximum he said would be eight flights – and it could be as few as four – to fill the 1200-ton tanks of the Starship version designed for the moon.

“However, even if it were 16 flights with docking, this is not a problem,” he wrote. “SpaceX did more than 16 orbital flights in first half of 2021 & and has docked with Station (much harder than docking with our won ship) over 20 times.”

He also tweeted an unflattering photo of a mock-up of Blue Origin’s lander being set up at a conference, writing, “Somehow, this wasn’t convincing.”

Bezos, moguls, Moon, Race, Sues, U'
You may also like: