More human remains have been found at a property in the Geelong suburb of Norlane, after a grim discovery of a young man’s skull in 2019. 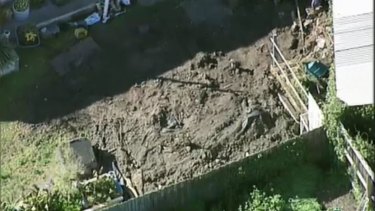 The backyard where the remains were found in 2019. Credit:Nine News

According to police, the remains found at the home are “believed to be related to a death in 2019”.

In September 2019, a man excavating at the home found a skull with shoulder-length hair and a number of bones belonging to a 26-year-old man.

The remains were buried under old newspaper catalogues and under an armchair, according to Nine News.

The remains will be transported to the coroner’s office for examination.

No one has been charged over the death of the 26-year-old man.

A number of neighbours told Nine News in 2019 a man and woman who lived at the property had suddenly “vanished” a few months before the discovery.

The man who found the remains at the time said a bone fell from a swag when he tried to move it and on further inspection he found what he believed to be a femur, hip bone, and skull covered in long hair.

at, found, ho, human, More, remains
You may also like: