Adios! Spain are knocked out of World Cup by minnows Morocco after missing all three spot-kicks in penalty shoot-out

Morocco have sensationally knocked Spain out of the World Cup with the African nation going through on penalties following a goalless 120 minutes of football.

The Spanish team hit the post with their first penalty and had two saved during the shootout which saw Africa’s sole remaining team progress to a semi final against the winners of tonight’s match between Portugal and Switzerland, which has seen Cristiano Ronaldo dropped to the bench.

Pablo Sarabia, Carlos Soler and Sergio Busquets missed their penalties for Spain, with Sarabia hitting the post and Morocco goalkeeper Yassine Bounou stopping the other two.

Tonight’s result has been the biggest surprise of the tournament as Spain were widely expected to get through to Saturday’s Quarter Final.

Morocco is the only team from outside Europe or South America to make it to the last eight. It is the only Arab – and African – nation left in the tournament. 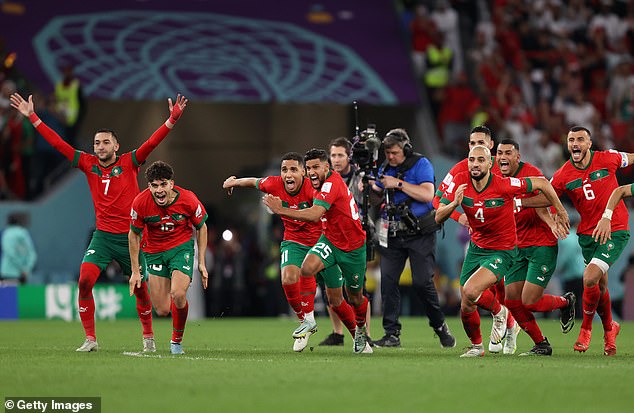 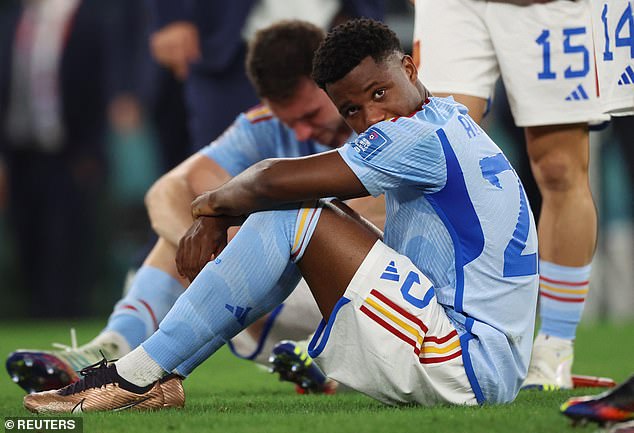 Spain’s Ansu Fati sits on the floor looking dejected moments after his team were dumped out of the World Cup by Morocco, who are the only team from outside Europe or South America left in the tournament

During the game, Spain dominated possession but Morocco’s defence held firm, restricting the Iberian giants to a handful of chances.

Jubilant Moroccan players lifted out their head coach Walid Regragiu following the biggest shock so far of the tournament.

Moroccan fan Boutaina Essadiki told Al Jazeera: ‘To go past the first round was the first football joy for the young generation and it’s beautiful because what’s happening on the pitch is bringing together children of the Moroccan diaspora, born all over Europe.

‘The win [over Spain] will be a victory for all Arab teams.

‘I’m so proud to be a Moroccan right now. And given the situation, even if I wasn’t a Moroccan I’d like to be one to join in and celebrate.’

Members of the Moroccan diaspora celebrated their historic victory across Europe.

Moments after their dramatic victory, fans took to the streets of Brussels, The Hague and Barcelona, lighting flares and singing songs.

Morocco have progressed into this weekend’s Quarter Finals where they join The Netherlands, Argentina, Croatia, Brazil, England, France and the winners of Switzerland and Portugal playing for a place in the final four.

Morocco play the winners of tonight’s game at 3pm on Saturday, where the victors are destined to play either England or France for a place in the final. 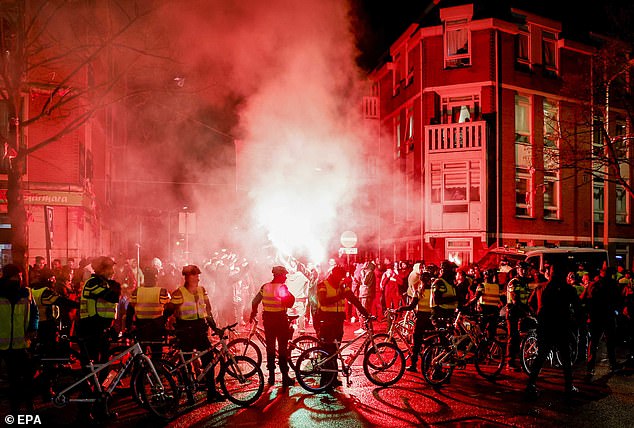 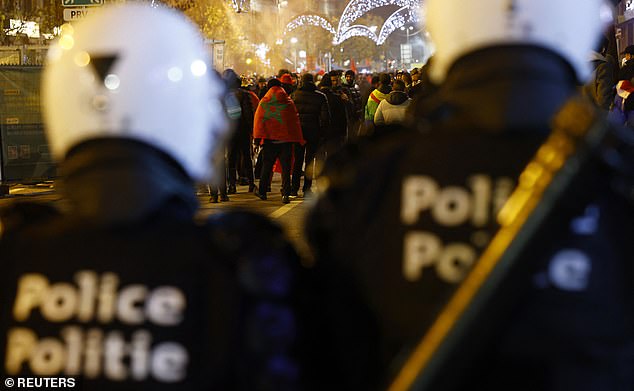 Outside the stadium, riot police and dogs were deployed as fans tried to enter the stadium.

Security forces could be seen dragging away at least three people as Morocco played Spain inside the nearby Education City Stadium.

Heated discussions were taking place between some Morocco fans and security forces over whether or not they could head through the perimeter gate and move towards the spectator entrances.

Some people were showing their phones and what appeared to be their passports, but were turned away. 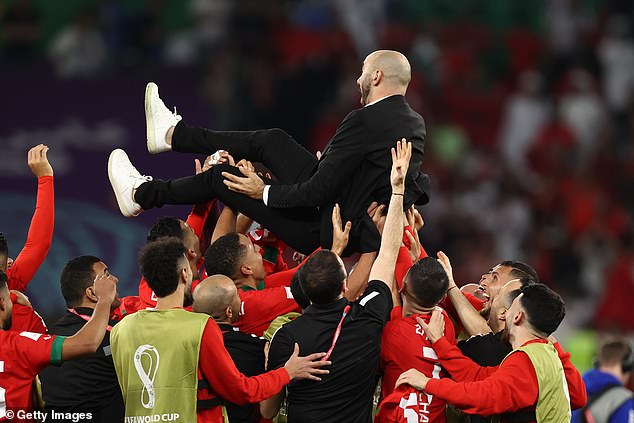 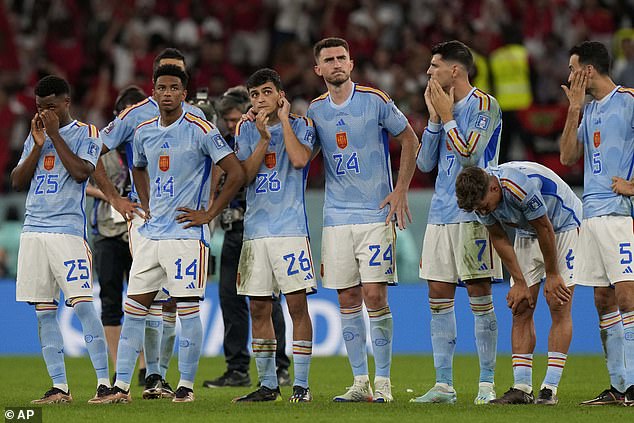 At one stage, security forces inside the stadium perimeter – but outside the spectator entrances – marched forward to move people back.

Riot police were then asked to put on their helmets and moved to a new position while police dogs could also be seen.

One security official said of the people outside: ‘They are not moving away, they want to enter.’

It was unclear how many people outside the stadium had tickets and how many did not.

One fan was allowed by the security forces to head to the spectator entrance after 75 minutes had been played, while two other fans said they had ‘no ticket’ and others were asking for them.

A member of the security forces later removed someone for filming on their phone and asked a PA reporter to stop filming.

The atmosphere outside the stadium did calm down with groups of Moroccan supporters and others crowding around phones to watch the game after moving away from the perimeter gate.

Security forces handed water to some Moroccan supporters while a couple of other officers could be seen watching the game by looking over the shoulders of fans. 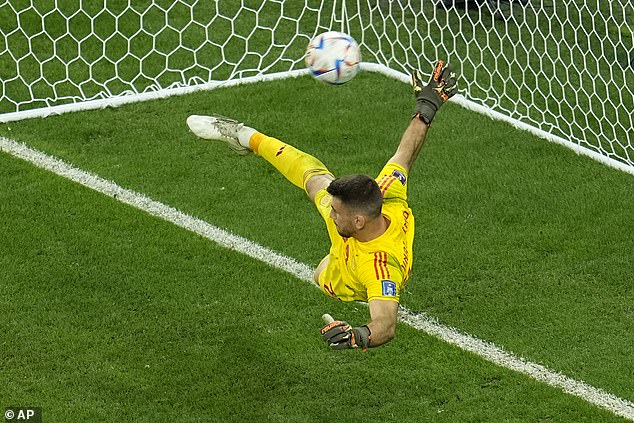