The vast site, spread over nearly 500 square km in the Xinjiang region, is thought to house 110 silos for launching weapons, in what has been described as “the most significant expansion of the Chinese nuclear arsenal ever”. 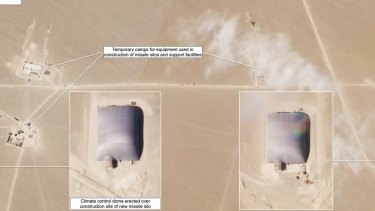 The Federation of American Scientists used civilian satellite to examine the Gobi Desert near Hami, where Uyghur Muslims are believed to be housed in “re-education camps”.

They spotted a series of large inflatable domes – typically used by construction teams on military bases to hide the work they are doing below.

The discovery comes just weeks after another silo field was spotted in Yumen, northeast China. The James Martin Centre for Nonproliferation Studies, who found the site, claim there are 120 missile silos there.

China says it has only a “minimum deterrent” of nuclear weapons, which experts estimate to number around 300. The US and Russia have strategic arsenals five times as big and stockpiles of around 5000 weapons each. 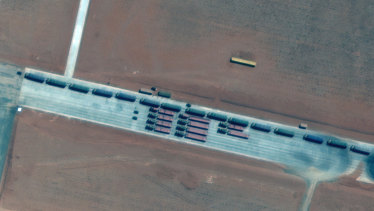 A Maxar Technologies picture taken in 2019 shows an airstrip used by mobile missile units that train in that area.Credit:AP

Admiral Charles Richard, who commands US nuclear forces, said that the Chinese nuclear weapons stockpile was “expected to double, if not triple or quadruple, over the next decade”.

“The silo construction at Yumen and Hami constitutes the most significant expansion of the Chinese nuclear arsenal ever,” Matt Korda and Hans M Kristensen wrote in a study of the silo field.

But other experts warned that the rapid expansion may just be a deterrent.

“Just because you build the silos doesn’t mean you have to fill them all with missiles,” said Vipin Narang, of Massachusetts Institute of Technology.

“They can move them around.”

“It’s not insane. They make the United States target a lot of silos that may be empty. They can fill these silos slowly if they need to build up their force. And they get leverage in arms control.

“I’m surprised they didn’t do this a decade ago,” he said. This month, Xi Jinping, China’s leader, threatened to “bash the heads” of any foreign powers that try to bully Beijing.