Mother feared for life when neighbour squirted blue liquid over her

A terrified mother was left ‘in fear for her life’ after an unknown substance was squirted in her face by her neighbour.

Claire Hallsworth was going shopping with her six year old when she argued with neighbour Kim Marshall, 41, over her car being blocked in outside her home in Stockport.

The defendant has been fined £100 by Tameside Magistrates’ Court and is now required to complete a 12 month community order, including six months of drug rehabilitation. Marshall is also forbidden from contacting Mrs Hallsworth for a year. 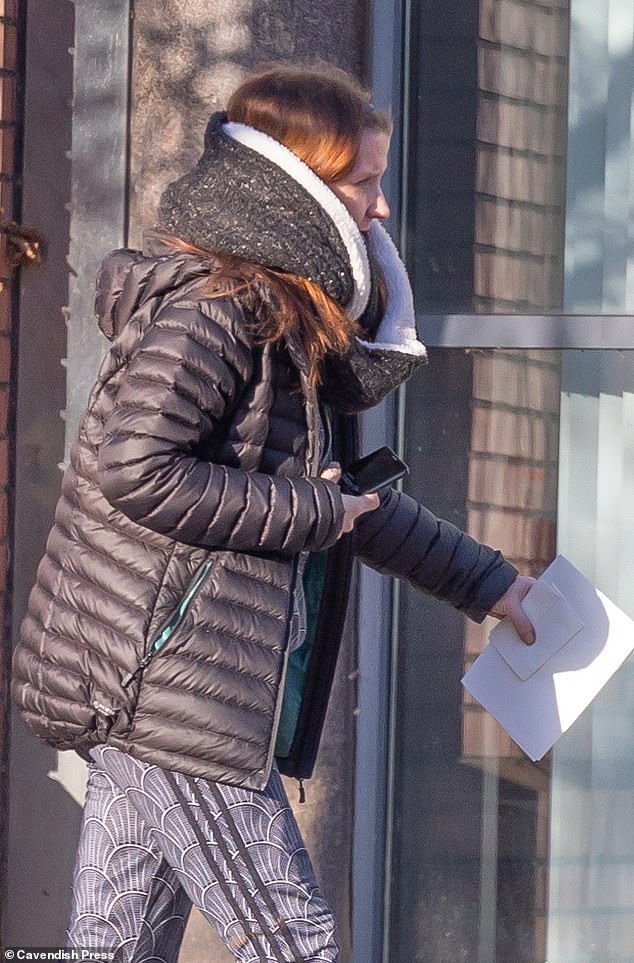 Kim Marshall, 41, sprayed a mysterious blue substance into her neighbour, Claire Hallsworth’s, face. She will pay Mrs Hallsworth £250 in compensation

She had already been ordered to pay Mrs Hallsworth £250 compensation after being convicted of common assault at an earlier hearing.

During the incident in January, Marshall was waving her arms about and shouting: ‘Who do you think you are talking to?’

She then squirted the mystery substance from a plastic bottle over the victim’s face, hands and clothing.

Mrs Hallsworth, from Stockport, Greater Manchester began to suffer a bad reaction to the substance and was admitted to hospital for treatment.

She told police her young son, who has a disability, had been scared by the incident.

‘This incident has terrified me not only for myself but for my young son who was also scared. This happened so close to my address, somewhere I should feel safe. Now I am thinking of moving. I was in genuine fear for my life. I had no idea what the substance was and what effect it could have on me.

‘I suffer from anxiety. This incident will have a detrimental effect on that, having seen this female regularly and the stress of not knowing what the substance was that was sprayed on me.’

Marshall also admitted an unrelated charge of possession of an offensive weapon, said to be a knuckleduster blade.

Miss Shazia Aslam, prosecuting, said Mrs Hallsworth and Marshall’s partner had argued before over parking at their address.

‘The matters started one-and-a-half years ago in the summer of 2020. Mrs Hallsworth says the abuse began around the parking space outside her address, which she says has been allocated to her. She has a son who is disabled.

‘She politely asked the defendant’s partner to move their car a bit just so that she could fit her vehicle in the space next to it but things then became very petty and he would always try to block her vehicle.

‘Mrs Hallsworth always found it difficult to park in the space. There was then a petty argument with name calling and swearing from the defendant.

‘The incident before the court took place at 9.10am on January 4. The complainant had gone outside to her vehicle with her six-year-old son. She was taking her hoover to get repaired and also go to a doctor’s appointment.

The prosecutor said Marshall, who was slurring her words, had aggressively approached Mrs Hallsworth, who was outside with her son. 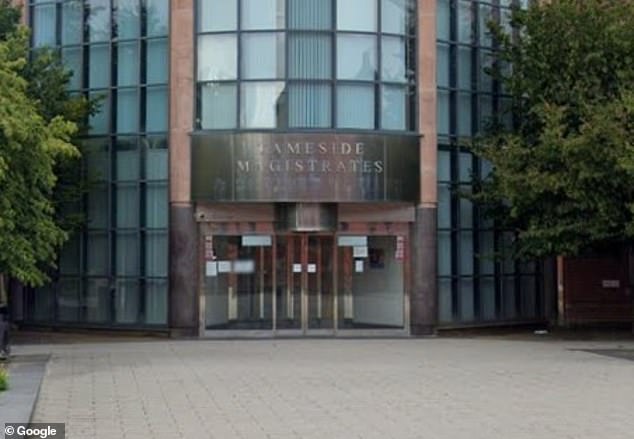 Mrs Hallsworth asked the defendant whether she was drunk and put her son in her car.

‘As she was talking, the defendant held up one hand and squirted some unknown liquid in the complainant’s face from a small plastic disposable bottle. The liquid was blue in colour. It was only sprayed once but a very large amount came out and the liquid covered her face, hands, neck, jumper and jeans.

‘She panicked. She had no idea what was in the bottle and was worried that it was some sort of acid.

Mrs Hallsworth ran to her car and later attended hospital after experiencing a bad reaction to the liquid.

Marshall was arrested and police found her in possession of a pendant with a knuckle duster with a blade.

Defence solicitor Rebecca Clarke told the court that Marshall maintained her innocence and intends to appeal the conviction.

‘Ms Hallsworth has made very clear in her evidence was that she had not previously had an issue with Marshall but outlined issues with Marshall’s partner, issues with parking, issues that are ongoing.

‘She made clear that she’d not had any direct contact with Marshall and that this was the first time there was any direct issue with her.’

Marshall has 28 previous offences on her record, the most recent being from 2011 for possession of class A drugs.

Marshall was also fined £100 fine and made subject of a 12-month community order with requirements she complies with six months of drug rehabilitation and 20 days of rehabilitation activity.

She was told to attend the Women’s Problem Solving Court and pay £295 in costs and a victim surcharge.

She was banned from contacting Mrs Hallsworth for a year under the terms of a restraining order.