A mum-of-three has revealed her despair at the mould infestation in her home after one of her children was diagnosed with asthma.

Kym Austin, from Salford, said she has been in and out of the doctors surgery with her other two children, who suffer persistent coughs and chest infections.

She said she has been warned by a doctor that their infections are likely to be a direct result of the mould infestation at her three-bedroom home.

The medic even wrote a letter to Ms Austin’s landlord, the housing association Clarion, detailing their concerns. 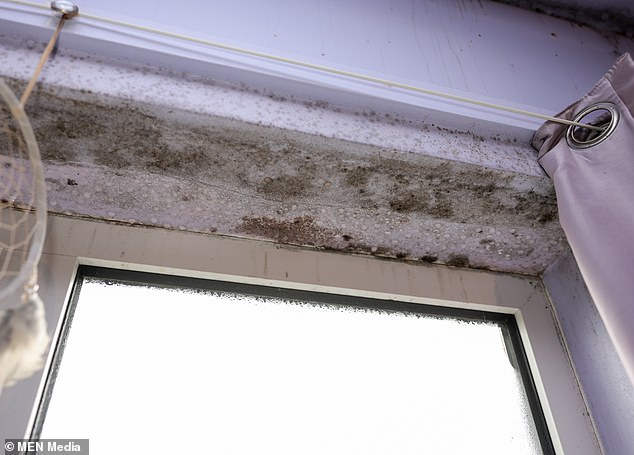 Kym Austin, from Salford, said she has been in and out of the doctors surgery with her other two children, who suffer persistent coughs and chest infections which she said her GP believes is due to the persistent mold in her house 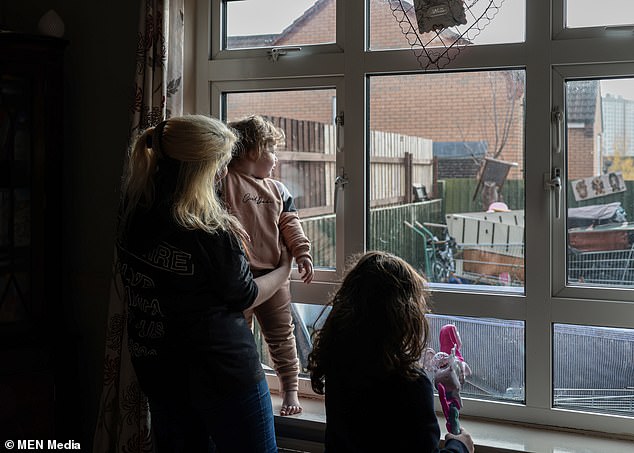 The kids now all sleep in the living room downstairs. Their own bedrooms are so riddled with thick, black mould, their mother doesn’t want them sleeping there

Inside the the family’s kitchen, three small blue inhalers are neatly lined up in a row, next to an assortment of tablets and cough syrups.

The kids now all sleep in the living room downstairs. Their own bedrooms are so riddled with thick, black mould, their mother doesn’t want them sleeping there.

Upstairs, thick lines of mould run along the tops of the walls as brown moisture trickles down the paintwork.

Window ledges and curtains are discoloured with brown and black gunge.

In the bathroom, specks of mould have seeped into a child’s toothbrush, and the once white shower curtain is now plagued with black and brown spots.

The family’s heartbreaking situation comes at a time when the conditions of social housing are at the forefront of the national agenda, following the tragic death of Awaab Ishak.

Awaab, two, died in 2020 after prolonged exposure to mould in his home on the Freehold estate in Rochdale.

What is black mold and why is it so common in rented housing?

It’s a fungus rather like mildew or toadstools, and it needs permanently damp conditions to grow and multiply.

It struggles to establish itself in dry conditions and, if you can see mould growing on a wall, you are looking at a colony of perhaps millions of mould spores.

Once they start growing, they increase rapidly and will continue to do so unless eradicated.

Mould is an allergen and, if allowed to spread, can become highly toxic and cause severe respiratory infections. Spores can grow on plaster, wood, carpet and even dust.

The problem is worse in tenanted homes, rather than privately owned ones, as these properties tend to be cheaply built with thin walls and are prone to condensation. Also, much rental stock is old and not built to current housing regulations.

Another factor is that these properties tend to be less well looked after by landlords than owner-occupied homes.

Indeed, according to the charity Shelter, around 40 per cent of rental homes are susceptible to mould.

As the government makes promises that landlords will be punished for failing to deal with issues such as mould promptly, just ten miles away, a terrifyingly similar situation presents.

Ms Austin said: ‘When I read the article about Awaab Ishak I had goosebumps. I’ve done it all and I just can’t get my kids away from it.’

She and her children were moved to the house, owned and managed by Clarion Housing, in February 2021.

The mum-of-three was desperate for a roof over her head, where she and her children could feel safe.

But less than four months after settling into the property, she began to notice dark speckled spots creeping through her bathroom and bedroom walls and ceilings, she said.

She contacted Clarion immediately and a mould expert visited her home.

She claims she was told there was condensation in the property, and was advised not to use her heating as much.

She also said she made repeated complaints about her boiler not working properly, and believes the mould is instead due to the fact that her windows are not sealed properly.

As the winter months drew in, the mould got worse and worse, Ms Austin said and added that Clarion sent a contractor to clean the walls and, for a couple of weeks, the mold problem seemed like it was fixed.

Three weeks later, the mother said she was horrified when the mould re-appeared, this time worse than before – and had latched on to all her children’s bedrooms.

By this point, the kids were getting sick, she said.

She said: ‘Clarion came out again and cleaned it. The expert said the walls needed proper treatment and that painting over it was never going to work.

‘They told me it needed a three-day mould course which would involve us having to move out of the property.

‘The third inspector came out in January 2022. He asked if we really wanted it painted because he felt this would just feed the mould.

‘I have children and there was mould everywhere so I told him he had to do it but then it grew back 20 times worse.

‘It’s not even just in one bedroom it’s the whole of the upstairs.’

Since the start of this year, she claims the kids have been at the doctors every two or three weeks with coughs, chest infections or colds.

Now, all three of them have been given inhalers.

The mother-of-three said: ‘My son has had chest x-rays because they were not sure why he was so wheezy.

‘He was seen last month and they said he definitely has asthma. 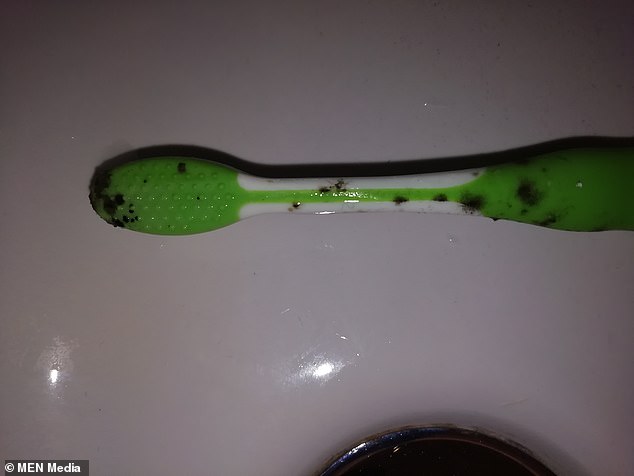 In the bathroom, specks of mould have seeped into a child’s toothbrush (pictured), and the once white shower curtain is now plagued with black and brown spots 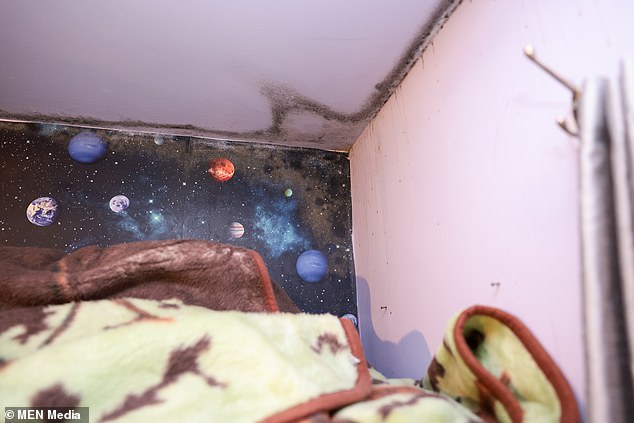 The mother-of-three said she was horrified when the mould re-appeared after her house was cleaned, but this time it was worse than before – and had latched on to all her children’s bedrooms

‘For the past two weeks he’s been using an inhaler three times a day when he’s never had problems before.

‘The other two are the same and struggle without an inhaler. My daughter is only two and she is having to go to the doctors regularly for check-ups.’

A letter from their GP, addressed to the housing association in January, reads: ‘I would appreciate your urgent assessment and management of the home conditions for Kym’s son and his family.

‘I have seen him today for reduced oxygen levels and a chest infection.

‘The significant damp and mould in the property is likely to be the main causation for this acute infection and is very likely to happen again unless the damp is resolved.

‘There are three children resident in the property who are all sleeping downstairs due to the poor living conditions.

‘They are all at risk of respiratory problems unless this is resolved.’

Mostly all that remains in the upstairs bedroom are bin bags and boxes of Ms Austin’s possessions, all neatly labelled.

Anything that wasn’t covered had to be thrown away because it had become riddled with black and green mould.

Even the clothes in the bin bags have had to be thrown out because they’re not airtight, but she can scarcely afford to pay £10 a time for enough boxes with lids.

She said: ‘My son is being bullied at school because our neighbours have taken pictures of the mouldy furniture we’ve been told to keep in our garden and have put it on social media.

‘My stress levels are so high it’s affecting me physically. I am the only one sleeping upstairs now as there’s no more room and I’m starting to get really sick.

‘I am scared to be on my own because I’m frightened one of my kids is going to choke because they are coughing so much.

‘The coughs aren’t going away and I’m panicking.’

Ms Austin claims she has become so desperate she instructed the help of a solicitor, but claims an agreement between them and Clarion Housing has still not been reached. 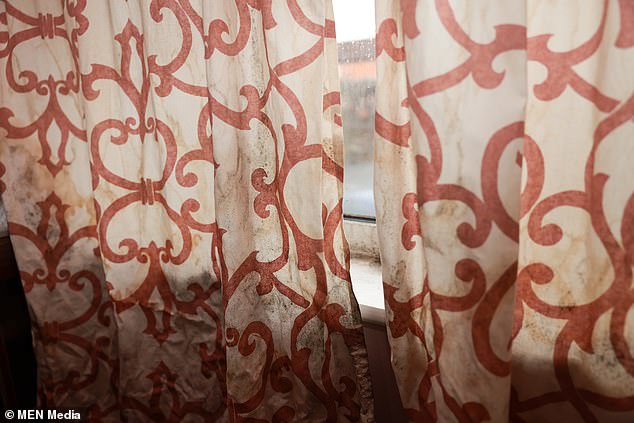 The curtains in Ms Austin’s bedroom are full of black spots, as is the window sill behind them. Ms Austin said the mold isn’t just in one bedroom, but ‘the whole upstairs’ 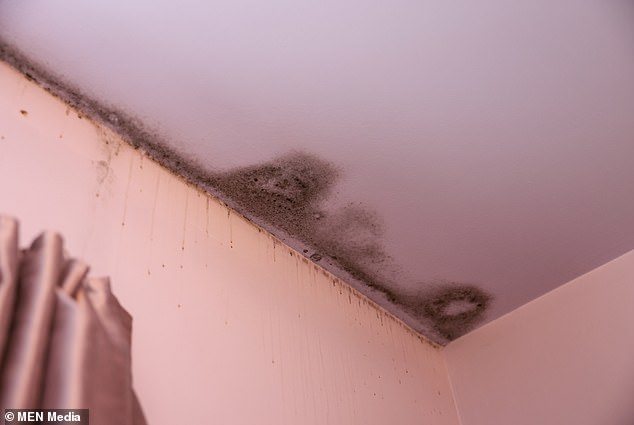 A spokesperson for the housing association Clarion, Ms Austin’s landlord, said: ‘The wellbeing of Ms Austin and her children is our absolute priority and we are committed to removing the mould and resolving this situation as soon as possible’

Earlier this month she contacted the Housing Ombudsman and sent an email to Clarion threatening to speak to her local newspaper if immediate action wasn’t taken.

Shortly after sending this email, she claims she received an offer from the housing association to remove her from the property a week before Christmas, so that the mould could be cleaned and painted over.

She has accepted to be temporarily moved from the house in January, but fears without proper repairs to the property, the mould and damp will return once she moves back in.

She said: ‘I’ve been contacting them for nearly two years about this issue and only when I threatened to go to the newspapers did someone finally acknowledge my emails.

‘I have no faith that when I move back into the house the issue is going to be resolved. I just want to be rehomed permanently.’

A spokesperson for Clarion said: ‘The wellbeing of Ms Austin and her children is our absolute priority and we are committed to removing the mould and resolving this situation as soon as possible.

‘We have previously made several offers to undertake the work and move the household during this time.

‘Senior colleagues will contact her as a priority again on the 29th November to do everything in our power to agree a time for completing the work earlier, which will take around a week to complete.’