Mother-of-two, 42, public sector worker who killed cyclist in hit-and-run smash in her Mercedes while TEN times over prescribed limit of cocaine then told police she ‘thought she hit a fox’ is jailed for five years

A mother-of-two who killed a cyclist in a hit-and-run crash while over ten times the prescribed limit for cocaine and later told police she thought she had hit a fox has been jailed for five years.

Emma Moughan, 42, a public sector worker, was twice the drink-drive limit and over ten times the limit for cocaine when her Mercedes Benz ploughed into Patrick Hird in October last year.

York Crown Court heard the 61-year-old grandfather, who was cycling to work at the time in a hi-vis jacket, hit the roof of Moughan’s car and fell onto the side of the road near Camblesforth in North Yorkshire.

He was later found by a passing motorist and pronounced dead at the scene.

Moughan, who has two daughters aged 18 and 12, sobbed on Monday as Judge Simon Hickey handed her a five-year jail term and a six-year driving ban, telling her no sentence ‘could possibly do justice in the family’s eyes’.

Moughan had been drinking and taking drugs before setting off in her car following an argument with her partner, the court heard. 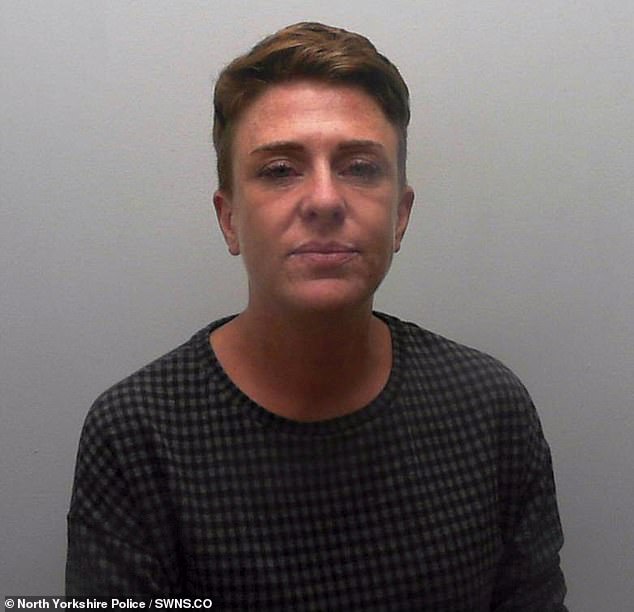 Emma Moughan, 42, a public sector worker, was twice the drink-drive limit and over ten times the limit for cocaine when her Mercedes Benz ploughed into Patrick Hird in October last year

Prosecutor Carmel Pearson said the collision took place just after midnight on October 11 last year, when Moughan from Selby, North Yorkshire, was driving along the A1041.

Moughan had been drinking and taking drugs before setting off in her car following an argument with her partner, the court heard.

She had intended to drive ten miles from her home to her mother’s house.

But at the same time, Mr Hird was riding his motorised pedal bike on the same road to a night shift at a factory and was wearing a high-viz yellow jacket.

Ms Pearson said the bicycle also had lights on both the front and back and would have been visible for 600 metres, or more than half a kilometre.

When Moughan ploughed into Mr Hird on the quiet country road, he was thrown onto the roof of her car and fell onto the side of the road.

Mr Hird was found at the side of the road by passing motorists who tried to resuscitate him, but he was later pronounced dead due to head and spinal injuries.

Ms Pearson said Moughan then drove on towards Selby with a smashed windscreen and on the rims of her wheels as her tyres had been seriously damaged in the crash.

She said: ‘By 11.55 pm, [Moughan] reached Selby [where] police were dealing with another incident.’

Officers were alerted to the noise of Moughan’s car as it drove past them because it was being driven ‘on two of the rims [and] its tyres were completely flat’.

She added: ‘The front windscreen was completely smashed.’

Moughan was stopped and breathalysed, and when asked about the collision, she told officers she thought she had hit a fox.

Moughan was found to be ten times the legal limit for cocaine, with the limit being 10 micrograms (mg).

The drug-drive law sets limits at very low levels – bordering on ‘zero tolerance’ – for eight drugs commonly associated with illegal use such as cannabis, cocaine, ‘ecstasy’ and ketamine. 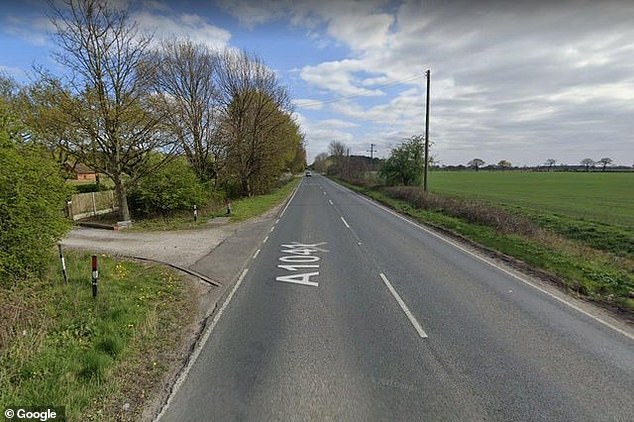 Police then analysed CCTV of Moughan’s driving into Selby which showed the Mercedes being driven straight over a mini-roundabout and damaging a kerb after passing across a traffic island.

Police found Mr Hirst’s DNA on the roof of Moughan’s car and a missing part of the Mercedes’ front bumper at the scene of the collision.

Ms Pearson also said the car had a bent steering rod and snapped suspension arm, ‘such was the impact of the collision’.

She added that an investigation showed the Mercedes had ‘straddled the grass verge at the point of impact, proving [Moughan] was far to the left of the carriageway when she collided with [Mr Hird]’.

Moughan was arrested and charged with causing death by dangerous driving, and later released under investigation.

The second incident took place on December 1, when a member of the public called police to report a woman who had ‘passed out’ in a Fiat Punto.

At the scene, Police found damage to the car ‘consistent with a road traffic accident’.

Emma Moughan posted this picture on Instagram in January 2019

Moughan underwent a roadside breath test which showed she was well over three times the drink-drive limit.

She was arrested again and charged with driving without due care and attention, failing to provide a specimen for analysis, failing to stop following an accident and failing to report an accident.

She was given a community order and a two-year driving ban for those offences and appeared in court on Monday, knowing she was destined for jail after pleading guilty to causing the death of Mr Hird.

Speaking at the hearing, Mr Hirst’s sister Lorraine McCulloch said her family had been devastated by the death of her brother, who had lived next door to her for 25 years.

She said her mother, who had bought Mr Hird the bike on which he had died, ‘couldn’t handle’ the death of her beloved son.

She said her brother had lost his wife nine years ago following a blood clot on the brain.

Neil Cutte, mitigating, said Moughan had never been in trouble before her first conviction in December, had been in full-time employment and was previously ‘highly thought of’.

However, he said there were ‘issues bubbling under the surface with her mental health’ following a difficult previous relationship and she turned to drink and drugs.

In sentencing Moughan, Judge Hickey said: ‘It’s a tragedy that was completely avoidable.’

He told Moughan that in her drunk and drugged state, she had ‘effectively’ driven a ‘weapon’ for at least seven miles before the collision with Mr Hird, who had ‘no chance’.

He said it was ‘incredible’ that Moughan had been able to drive from the crash scene to Selby with a smashed windscreen and described the effect on Mr Hird’s family as ‘nothing short of immense’.