Mother's nightmare over landslide plot next door that buried her lawn

‘The developer disappeared… along with my garden!’ Mother’s never-ending nightmare over plot next door that became landslide and buried her lawn after builders dug hole then left

A woman has been left distraught and feels out of options after a landslide caused by a ‘careless’ developer ruined her garden.

Single mother Victoria Bowden, 35, said she was a proud first-time buyer when she moved into a new home in Torquay, Devon, with her two children back in 2019.

But the dream of enjoying the sunny back garden as a family turned into a nightmare as it is now too dangerous to even set foot in.

The barren landslide was created when a developer Tony Tester bought the plot of land next door and dug a hole for a house – but left the work unfinished.

Victoria said she has now been left feeling helpless and doesn’t know what to do. 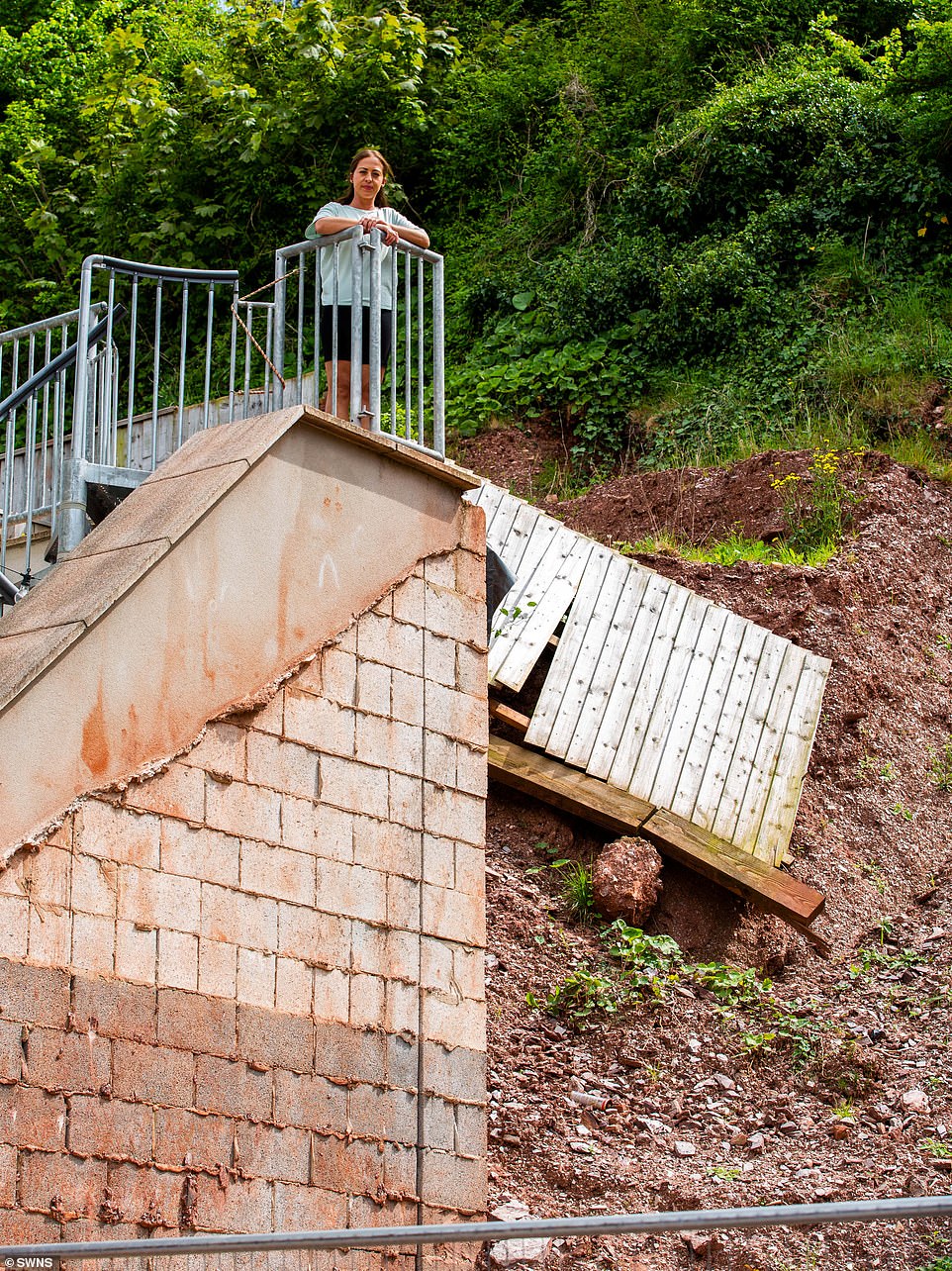 Victoria Bowden, 35, has told how her children can no longer play in their back garden in Torquay, Devon, for safety reasons after builders allegedly caused a landslide in the neighbouring plot 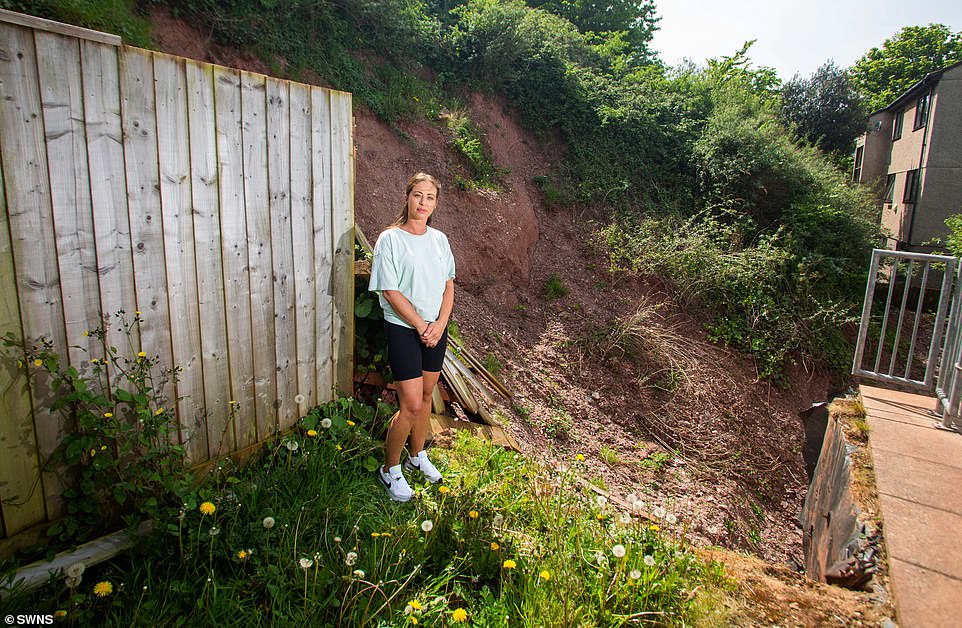 The mother-of-two said her young children, aged eight and 10, used to adore their sunny little back garden 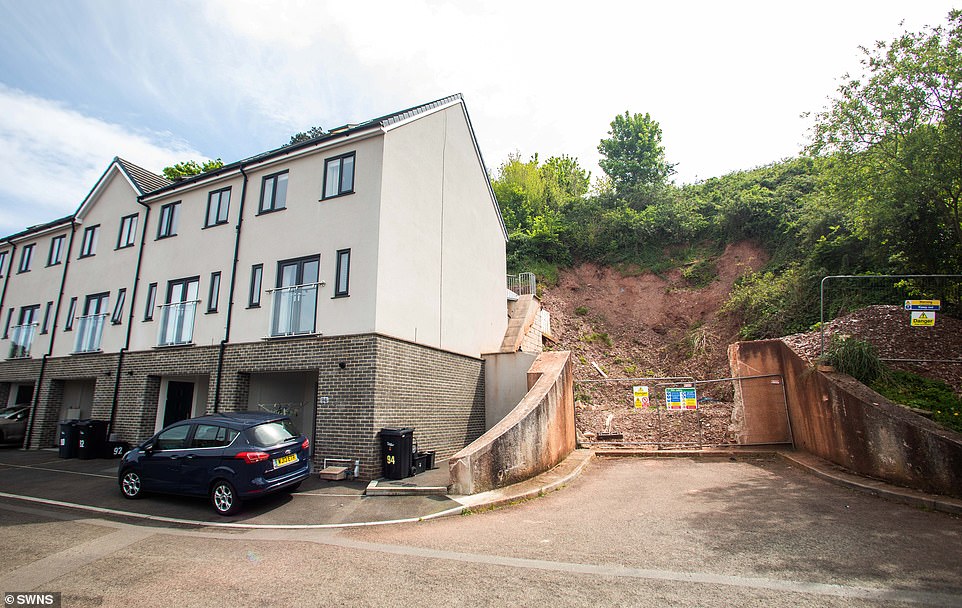 She said: ‘A digger turned up at the land – before anything legal was drawn up – and dug out the plot to put the groundworks in for the house.

‘Then the developer disappeared, along with our garden.

‘It’s not like the land went in just one day.

‘The wet weather, wind and rain created the landslide in a gradual process because there is nothing there holding the garden back due to this massive hole that he dug.’

Victoria said the hole was dug up in July last year – but by August the developer still hadn’t visited the site – and she said he then begun ignoring her calls.

He has since re-sold the plot of land he had initially bought in March last year for £25k at auction to another developer and was ‘trying to wash his hands with it.’

Victoria added: ‘I think he fully intended to still build the house, but he kept dismissing my emails with excuses’.

Victoria says she is ‘furious’ at his response after he described it as a ‘force of nature’ and feels ‘let down’ after trusting him. 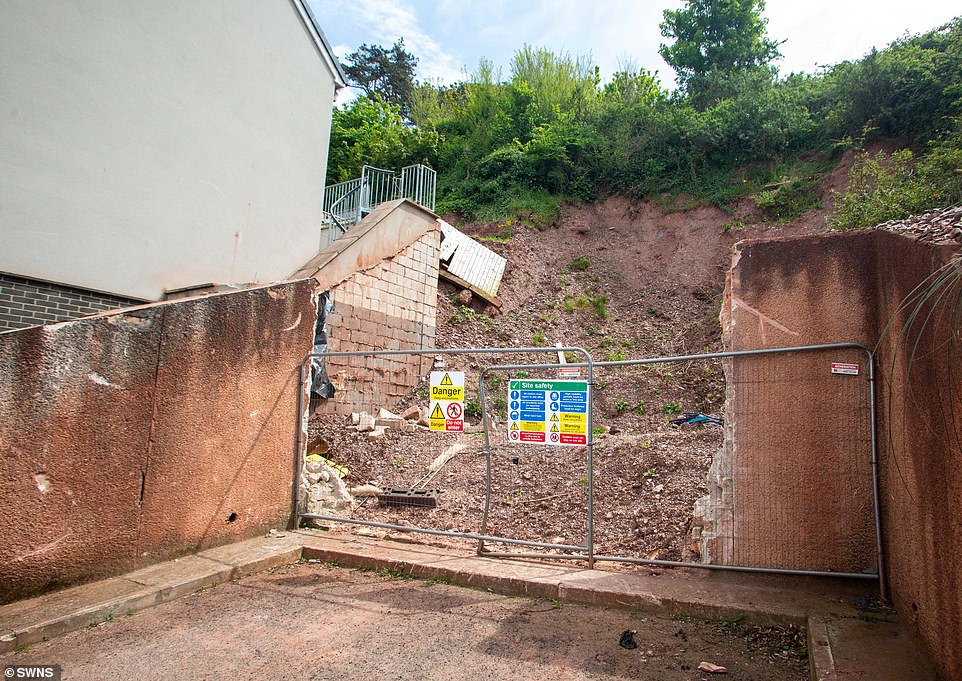 Victoria says the previous owner promised to build a retaining wall or introduce her to the new buyer, but he did neither 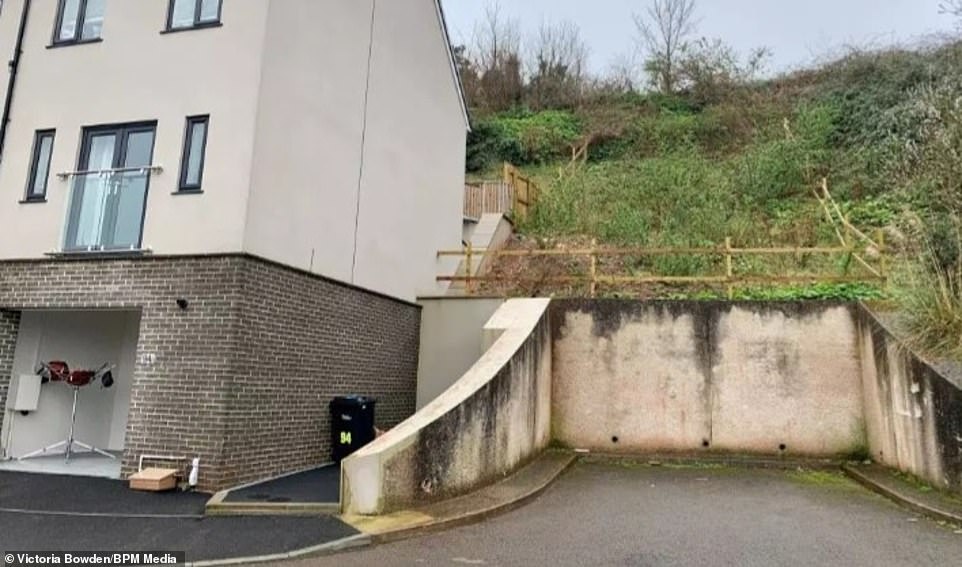 BEFORE: How the plot used to look before the most recent work resulted in the landslide 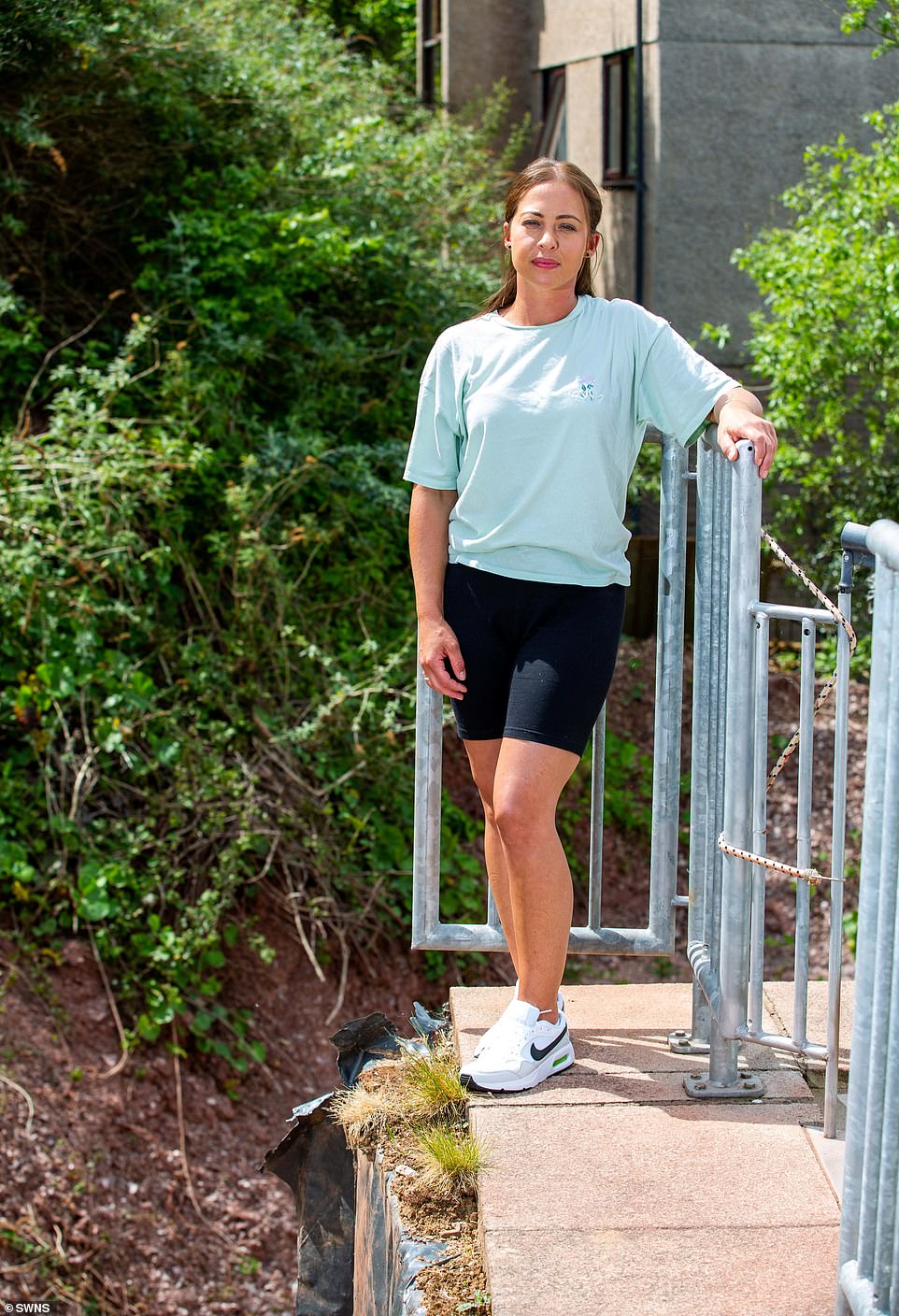 Victoria feels she has ran out of options, as she says she doesn’t have the money or ability to take the responsible developer to small claims court – leaving her stuck with a ruined garden

She added: ‘He has no intention of helping me. A ‘force of nature’? If he hadn’t of dug the hole – there would be no landslide!

‘None of his promises have materialised: he promised to build a retaining wall, introduce me to the new buyer – he hasn’t done either.

‘As soon as he signed that contract, the liability is now with the next guy – he has wiped his hands clean of the plot – but he’s now taken me on too.

‘He and I have had many conversations – he knows my situation as a single parent, studying at university and working part-time.

‘He knows I don’t have the finances or ability to take him to a small claims court.

‘I just don’t know what to do and my family desperately need some help.’ 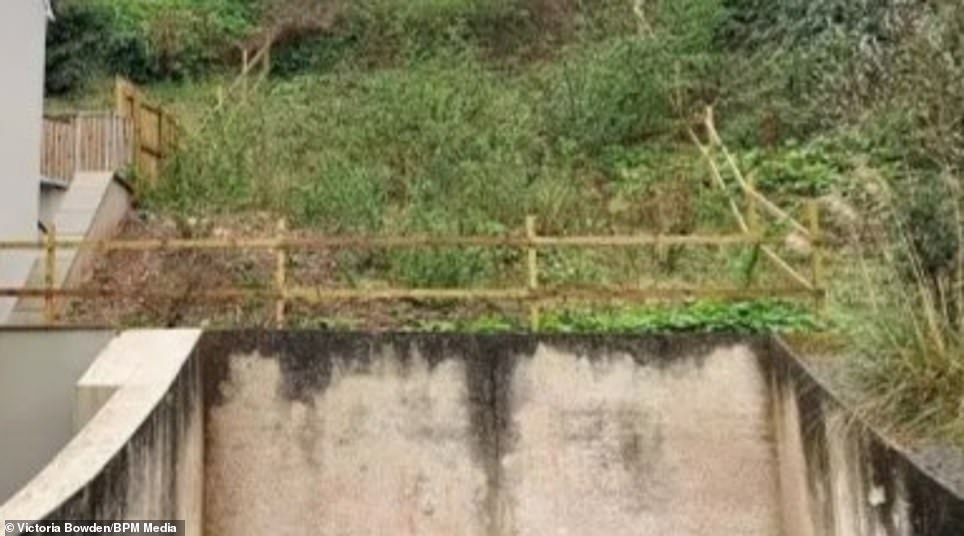 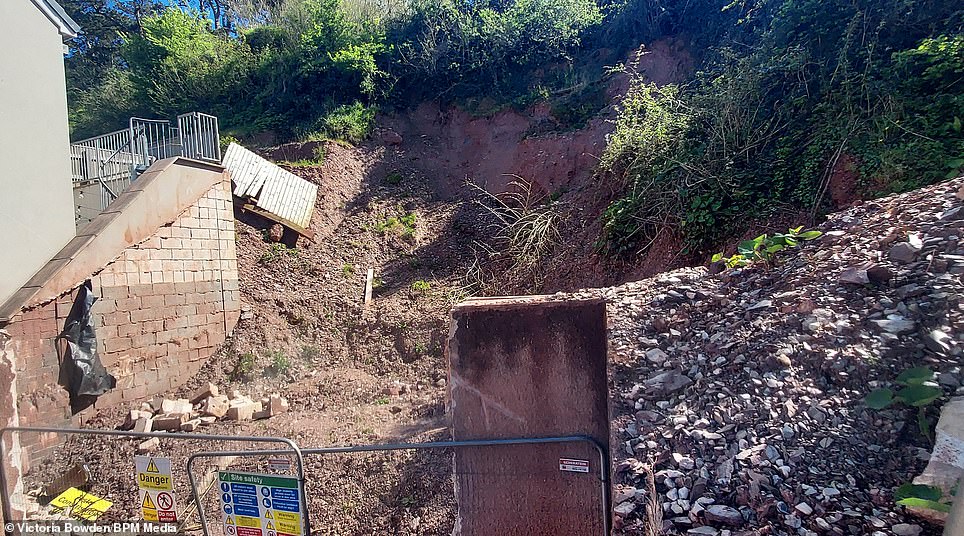 Before and after: How the plot of land appears now (right) and before the landslide (left)

Victoria said the house, located on Grange Road, at the top of Ellacombe, used to have a sunny little back garden that she and her children, aged eight and 10, ‘adored’.

She added: ‘When we bought the house we were absolutely chuffed as it was a fresh start for us and a new chapter.

‘I bought the house in 2019 – and it was a saviour during lockdown. We were out there all the time, doing chalk, paintings and lessons’.

Mr Tester was the third developer to buy up the plot and Victoria said he was ‘backwards and forwards for months deliberating on his plans.’

She added: ‘He was very confident that he was going to have a house built on the land by August, but said he needed access to my garden in order to build a retaining wall that would be strong enough to hold up his house.

‘He kept asking me if I was going to cause him any problems but I laid it out very clear to him that I wouldn’t and he would have full access to my property as long as he was happy to put it all in writing and pay my legal fees’.

Victoria also said Mr Tester had promised her compensation for the disturbance by landscaping her garden, after digging it out, to a high standard, similar to what he would do on his side.

In February this year, he then informed Victoria his ‘health had deteriorated’ and after many emails back and forth, admitted he had sold the plot to a family friend and he would discuss ‘nothing more’ on the subject.

Mr Tester claimed that the landslide was caused because a retaining wall which should have been built when the houses were first erected in Grange Road was not in place as shown when the original drawings were signed off by Torbay Council.

A spokesperson for Torbay Council said: ‘There is nothing to indicate that there has been a breach of either planning controls or building regulations that would have contributed to this landslip.’

Mr Tester said: ‘I’ve got sympathy for her and I understand her concern. When we started work we found that the retaining wall from her property wasn’t in place.

‘There is absolutely no question that the wall will not be built. The wall is on her land and I have told her that I’m prepared to help her.

‘What’s happened here is a force of nature.

‘The plot has been sold because I’ve had a change in health. It’s a good piece of land for a good sized property to be built on.’