Mother of teenager, 19, who was hit by a dangerous driver at 86mph refused to turn off her son’s life support – and the next day he started blinking

A mother whose son was seriously injured in a car crash on his 19th birthday refused to turn off his life support machine despite being told he had no hope of survival.

The next day, Lee Baxter blinked, beginning a painful recovery that continues more than three years on from the horror crash.

On Friday, the dangerous driver who crashed into Baxter’s car while travelling at almost three times the speed limit was jailed for six years.

He has been on the run since Christmas and skipped his May trial, in which he was found guilty.

Liverpool Crown Court heard how Baxter, who was on his way home with two friends on June 16, 2018, suffered major extensive injuries, including a severe brain injury and broken pelvis, and was left unconscious for weeks.

Prosecutor Graham Pickavance said that Baxter is still having rehabilitation and is no longer the same person.

Bernard, 43, had been travelling north in a black Audi along Bootle’s Southport Road, which has a 30mph limit around 11:30p.m.

About 150 metres from the junction where the crash happened, Bernard ‘decided to undertake the vehicle in front and accelerated to average speeds of approximately 86mph,’ Judge Garrett Byrne said.

‘This was caught on CCTV footage, it was quite shocking,’ he said.

Baxter had just started to turn his Ford Fiesta out of Earl Road when one and a half seconds later, the Audi smashed into the driver’s side, pushing the door back to almost the central handbrake position.

Investigations showed that Bernard had only braked one second earlier and could not stop.

‘Had he been driving at 30mph, he could have avoided the collision,’ the judge said. 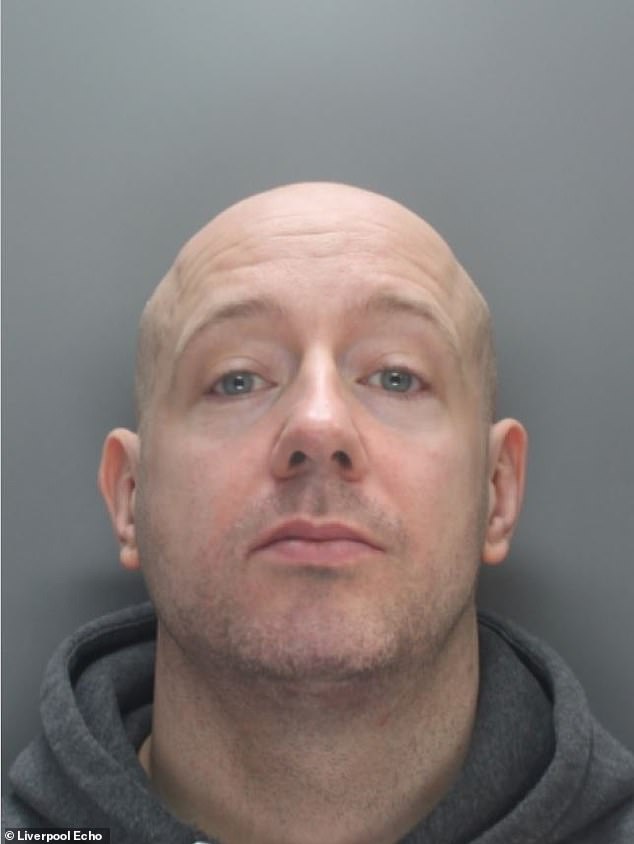 On Friday, the dangerous driver who crashed into Baxter’s car while travelling at almost three times the speed limit was jailed for six years. Kevin Bernard (pictured) was sentenced in absentia after failing to attend his trial. He is on the run and wanted on warrant

One of Baxter’s passengers was also seriously injured in the crash. The 19-year-old woman suffered a fractured pelvis and bleeding in the lung, which landed her in hospital for five days.

Prosecutor Pickavance told the court that following the crash, Baxter had to be cut from the wreckage and spent three weeks in a coma.

Bernard was spoken to by police at the scene and released. When he was interviewed later he tried to blame the crash on Baxter, the court heard.

Judge Byrne said Bernard’s driving showed a deliberate decision ‘to ignore or [act] with flagrant disregard for the rules of the road and with apparent disregard to the great danger caused to others.’

Bernard had been convicted of causing serious injury by dangerous driving. He had admitted four fraud offences involving obtaining motor insurance after failing to disclose that he had 11 points on his licence for speeding, and driving without insurance.

The court heard that he has previous convictions for assault, producing cannabis and criminal damage.

The judge sentenced Bernard to a total of six years imprisonment and banned him from driving for eight years.

In victim impact statements, Baxter’s mum Dawn said that medics said she would lose her son.

Dawn had a birthday cake and balloons ready for him when she received a call to say he had been taken to hospital.

She refused to turn off his life support and the next day he showed some response. ‘He fought and did survive,’ she said. 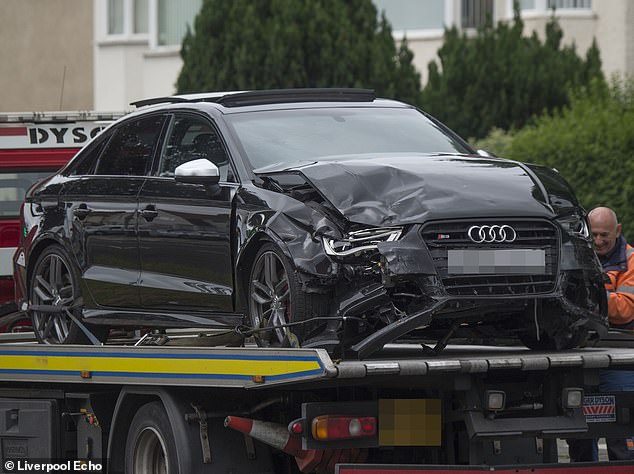 Bernard, 43, had been travelling north in a black Audi (pictured) along Bootle’s Southport Road, which has a 30mph limit around 11:30p.m. About 150 metres from the junction where the crash happened, Bernard ‘decided to undertake the vehicle in front and accelerated to average speeds of approximately 86mph,’ Judge Garrett Byrne said

Because of his brain injury, Baxter was transferred from Aintree University Hospital to The Walton Centre, where he was put on life support.

He was given a chest drain because of a punctured lung and broken ribs, then returned to Aintree, where he stayed for a month.

In an initial victim statement, Dawn said: ‘During this time I was told he had contracted a lung infection and part of the brain that had been damaged, the cerebellum, its job is to keep blood pressure at a certain rhythm, was going haywire.

‘I was told at this point I would lose my son and if he survived, he would be mentally and physically disabled.’

Graham Pickavance, prosecuting, said: ‘She was advised by the consultants to turn the life support machine off. She refused and apparently the next day there was some response from him.’

It is understood Lee blinked from his hospital bed which showed doctors he was fighting for his life.

Dawn said: ‘He fought it and did survive.’

Dawn recounted how Baxter could not do anything for himself initially and had to relearn everything including how to breathe, walk, eat and speak.

He suffered several strokes and feels self conscious socialising because of his slurred speech. He is still undergoing rehabilitation but can now drive.

‘It was a struggle every step he is still fighting. I can see the pain in his eyes.’

She continued, ‘When his tracheotomy was removed, that was the first time I heard him say ‘mum’ in three months.’ She said he still has balance issues, is on pain medication and may never recover fully.

‘He was always the class clown, making everyone laugh. He now actively shies away from groups. He was always affectionate to me… It is like the crash has taken my son away because he has no feelings towards me, he is cold. It is Lee’s body but it is not Lee.’

Dawn added that her son had had a £24,000 a year job lined up and a girlfriend before the accident but she had been unable to cope with his change in personality and ended the relationship.

The lockdown has set back Baxter’s recovery, his mum said, adding that he needs an eye operation and may lose his sight.

Merseyside Police have again appealed for information about Bernard’s whereabouts.

mum, OFF, refused, son&ap, to, turn
You may also like: