Mural of Marcus Rashford is repaired after being defaced

The mural of Marcus Rashford which was daubed with ‘racist’ graffiti in the wake of his Euro 2020 penalty heartache has been repainted.

The tribute on the wall of the Coffee House Cafe in his home town of Withington, Manchester, had been defaced, in what is being investigated by police as a possible ‘hate crime’, with derogatory comments about Rashford and included the words ‘sh**e’ and ‘b*****d’.

Residents had wasted little time in rushing to cover up the abuse with hundreds of positive notes and messages praising the England star – including terms such as ‘hero’, ‘inspiration’ and ‘role model’.

One touching message read: ‘I can take or leave football but I cannot take or leave people like you. Thank you for your passion, compassion and desire to change lives.’

Another said: ‘Dear Marcus, please know that you are so admired and people find you an inspiration.’

But now the mural’s original creator, French-born artist Akse, has repainted the artwork to eradicate all trace of the abuse.

It comes after the England star, 23, penned an emotional open letter to England fans apologising for his penalty miss against Italy at Wembley on Sunday.

The striker, who was left visibly distraught after his penalty hit the post, had also paid tribute to his supportive teammates and vowed to ‘come back stronger’ after the heartbreaking final.

Speaking in an open letter posted on his Twitter account, the star said: ‘The messages I have received have been positively overwhelming and seeing the response in Withington had me on the verge of tears.

‘The communities that always wrapped their arms around me continue to hold me up. I’m a 23-year-old black man from Withington and Wythenshawe, South Manchester. If I have nothing else, I have that.’ 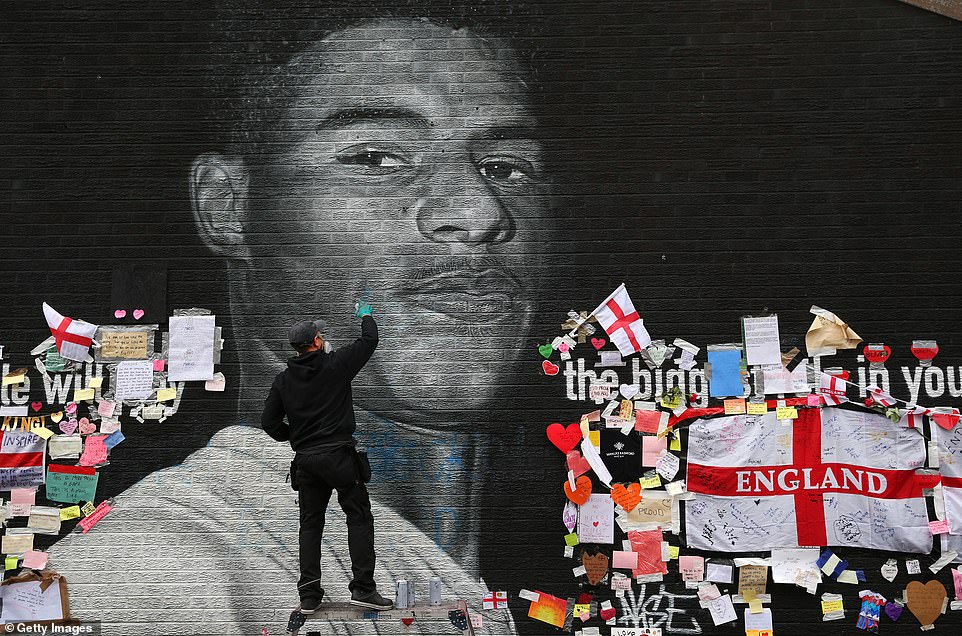 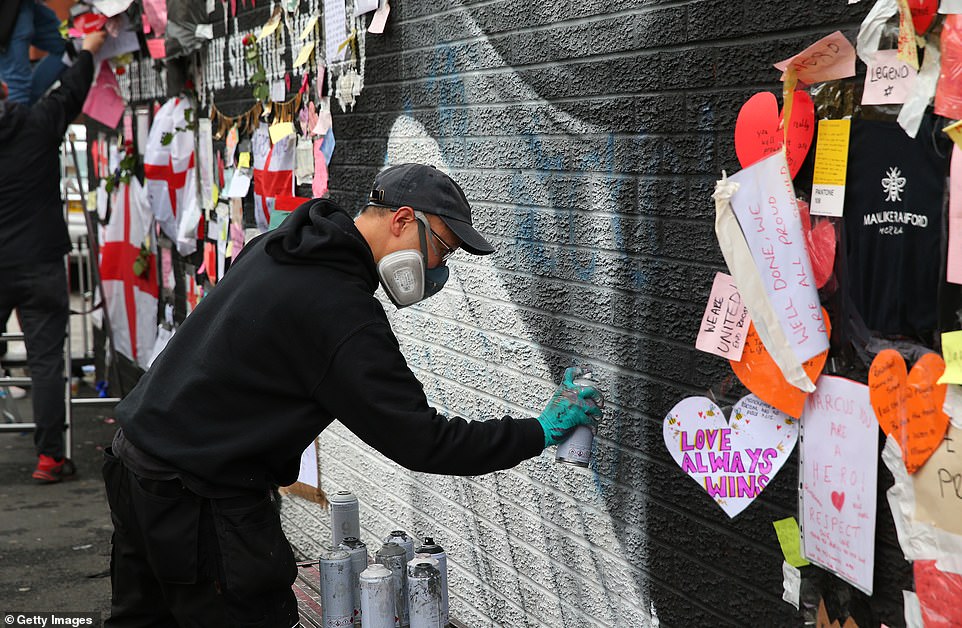 Now the mural on the wall of the Coffee House Cafe in his home town of Withington, Manchester, has been restored by its original creator French-born artist Akse 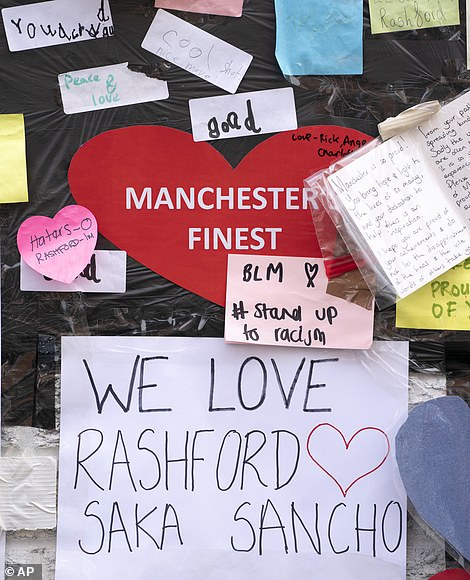 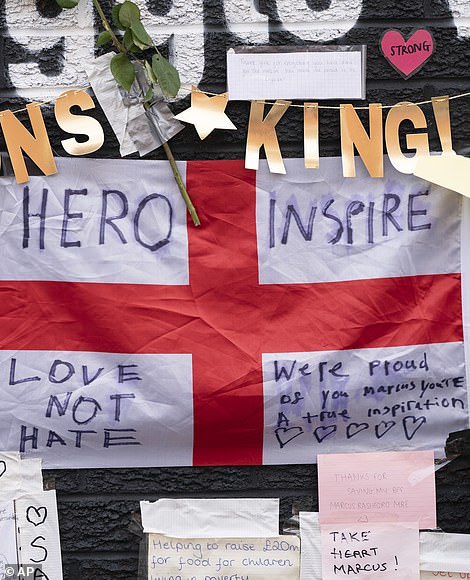 Residents had wasted little time in rushing to cover up the abuse with hundreds of positive notes and messages praising the England star – including terms such as ‘hero’, ‘inspiration’ and ‘role model’ 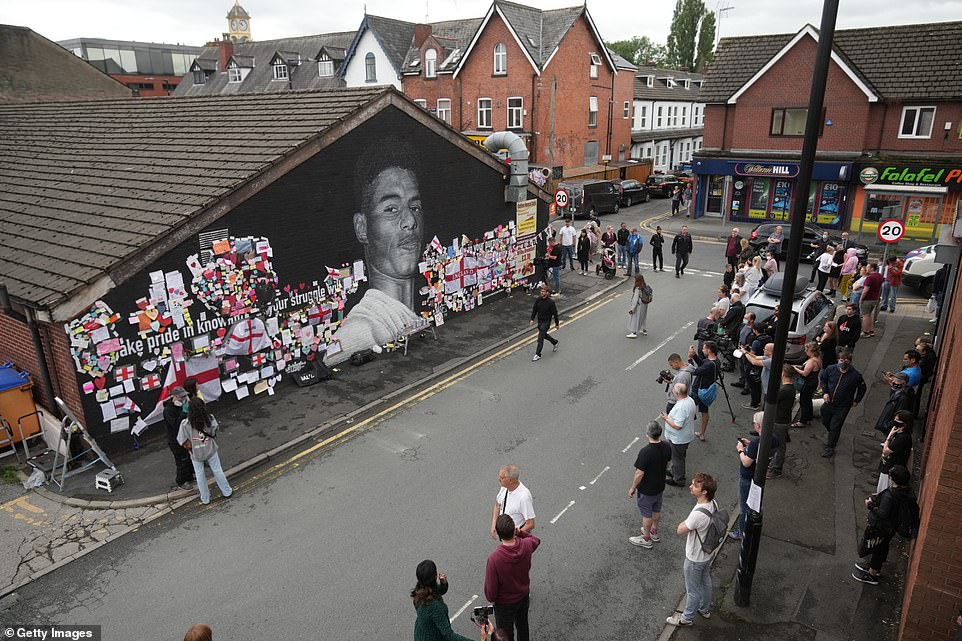 Residents gathered on the street in Withington, Manchester, to watch the mural being repainted after its was daubed with derogatory comments about Rashford 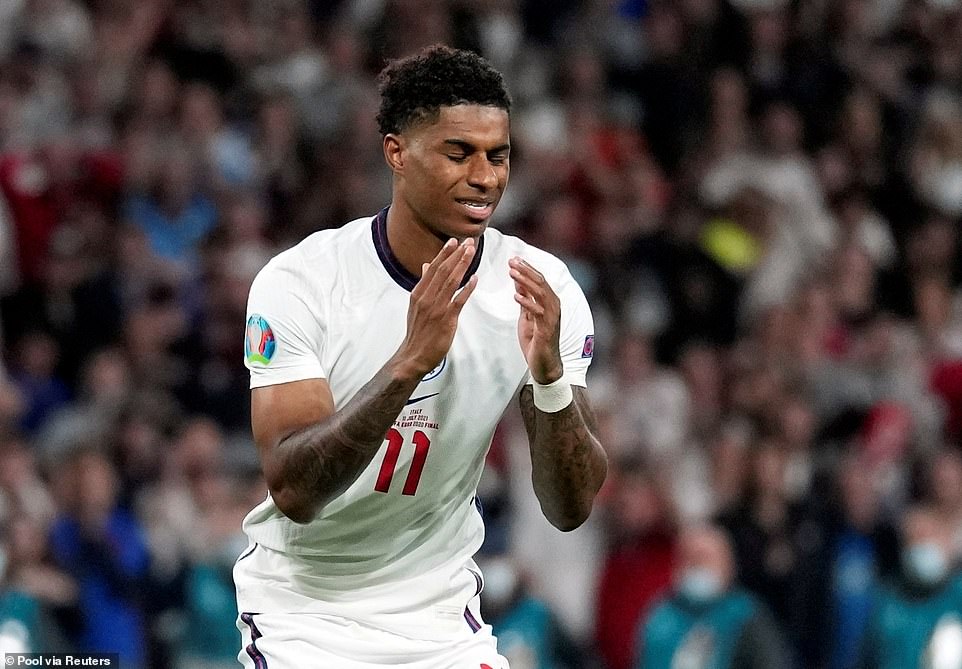 It comes after the England star, 23, penned an emotional open letter to England fans apologising for his penalty shoot-out miss against Italy at Wembley on Sunday

Earlier in the open letter he apologised for his penalty miss against Italy, saying ‘I felt as though I’d let everyone down’.

‘It’s been playing over in my head over and over since and there’s probably not a word to quite describe how it feels,’ he said. ‘Final. 55-years. 1 penalty. History. All I can say is sorry. I wish it had gone differently.’

The striker also praised his teammates by saying it was the ‘best camps I’ve experienced’ and adding that an ‘unbreakable brotherhood’ had been formed.

He also tackled the abuse he had faced, saying he would ‘never apologise’ for being himself, before ending on a positive note by vowing to bounce back from the heartache, saying: ‘For all the kind messages, thank you. I’ll be back stronger. We’ll be back stronger.’ 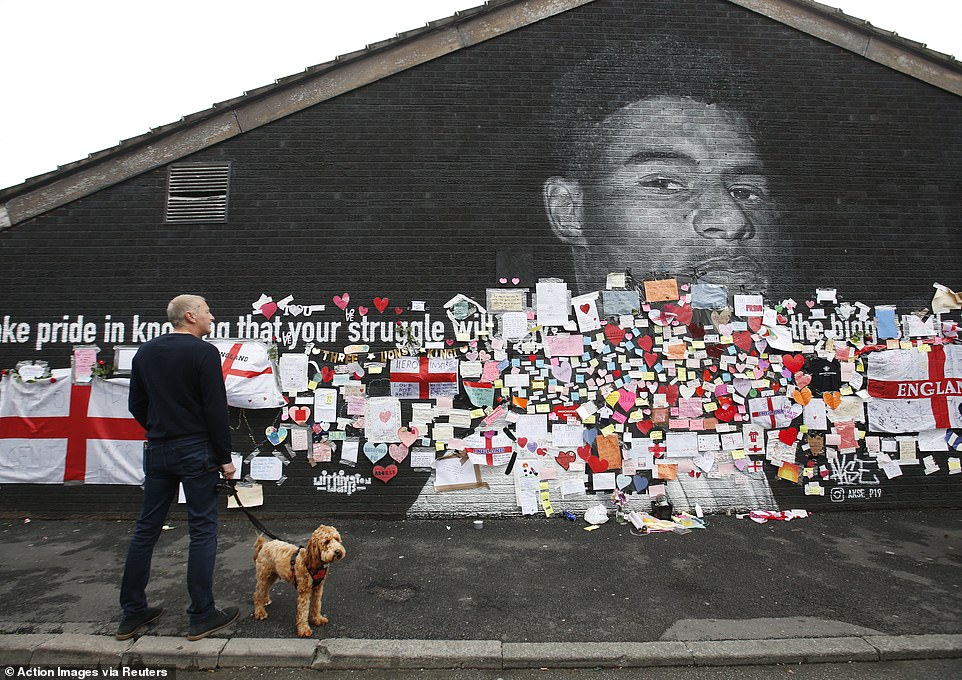 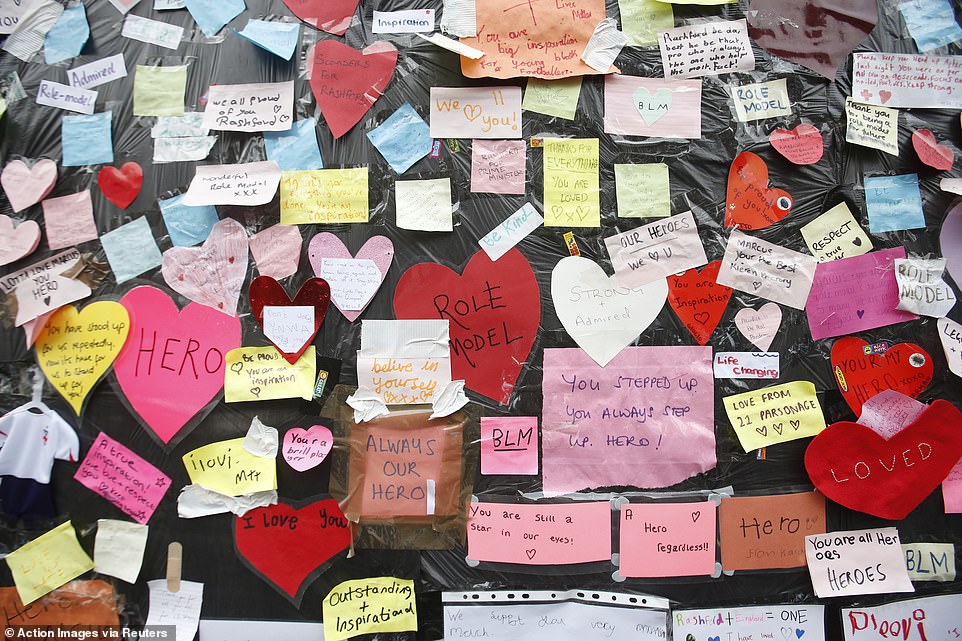 Residents wasted little time in rushing to cover up the abuse with embellishments still streaming in all daubed with inspirational terms including ‘hero’, ‘inspiration’ and ‘role model’

In a statement, GMP slammed the ‘racially aggravated’ and ‘disgraceful’ damage, adding: ‘Hate crime in any form is completely unacceptable and not welcome here in our city.

‘The force was alerted at around 2.50am this morning. No arrests have been made and inquiries are ongoing.’

Chief Superintendent Paul Savill said: ‘This is disgraceful behaviour and will absolutely not be tolerated. Greater Manchester prides itself on being made up from a number of diverse communities, and hate crime in any form is completely unacceptable and not welcome here in our city.

‘GMP takes crimes of this nature very seriously and an investigation has been launched. If anyone has any information that could help us to identify this offender please do not hesitate to speak to police.’ 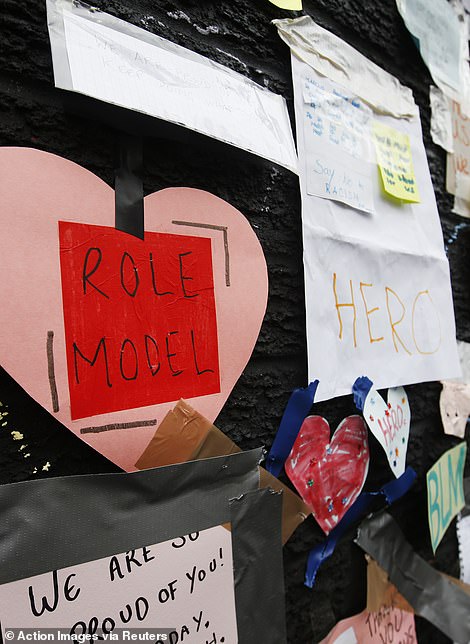 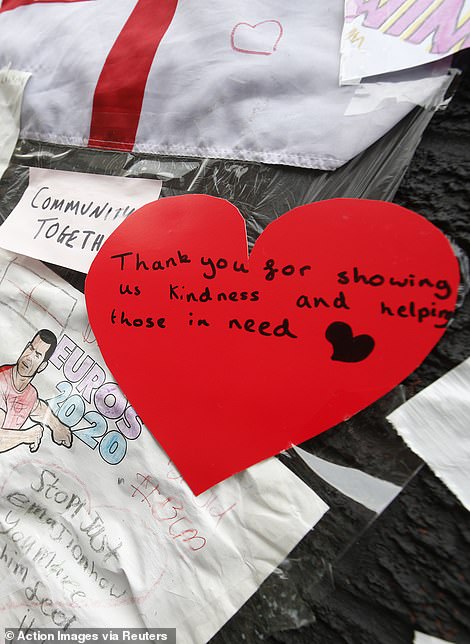 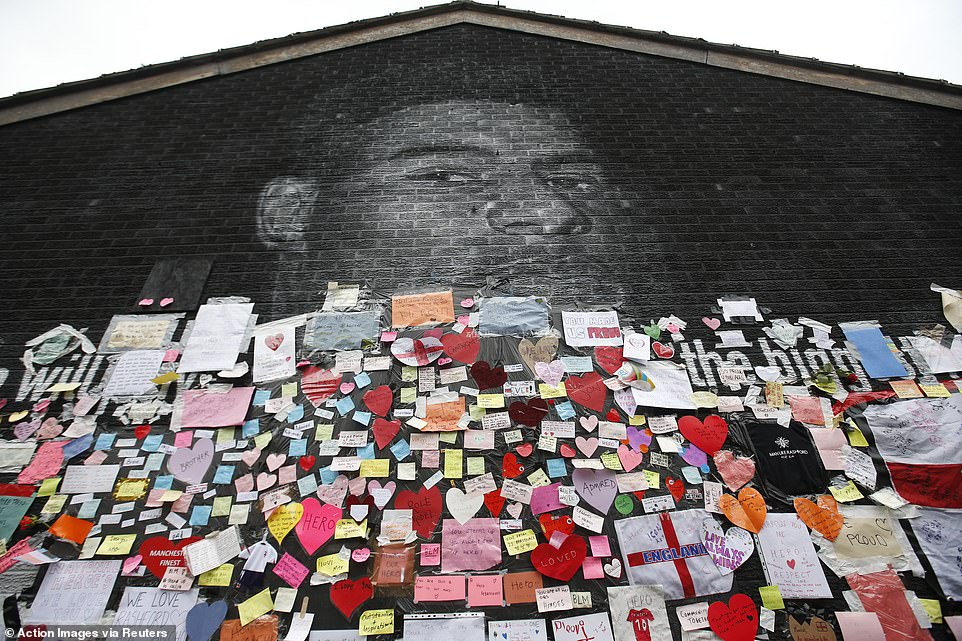 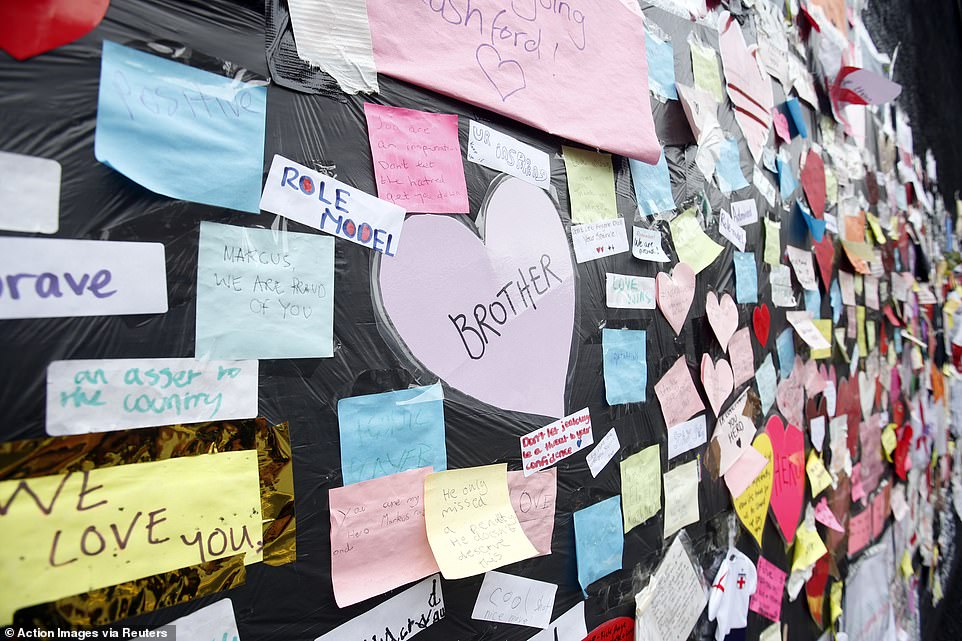 The embellishments were all daubed with a range of uplifting and supportive phrases including ‘positive’, ‘role model’, and ‘an asset to the country’

The artwork was created by Akse, a French-born graffiti artist, in November 2020. A painting of Rashford appears alongside the phrase: ‘Take pride in knowing that your struggle will play the biggest role in your purpose’.

The Football Association has condemned the ‘disgusting behaviour’ of a small number of mindless social media users who aimed abuse at players in the wake of England’s loss to the Italians.

England manager Gareth Southgate yesterday described abuse of Rashford, Sancho and Bukayo Saka as ‘unforgivable’ after they were targeted by racists overnight after they missed penalties.

He spoke out after Prince William and Prime Minister Boris Johnson denounced the racist abuse.

Southgate left little doubt of his feelings towards so-called supporters who had fired racist remarks at his team. He said: ‘It’s just not what we stand for. We have been a beacon of light in bringing people together in people being able to relate to the national team, and the national team stands for everybody and so that togetherness has to continue.

‘We have shown the power our country has when it does come together and has that energy and positivity together. It’s my decision who takes the penalties, it’s not a case of players not volunteering or more experienced players backing out.’ 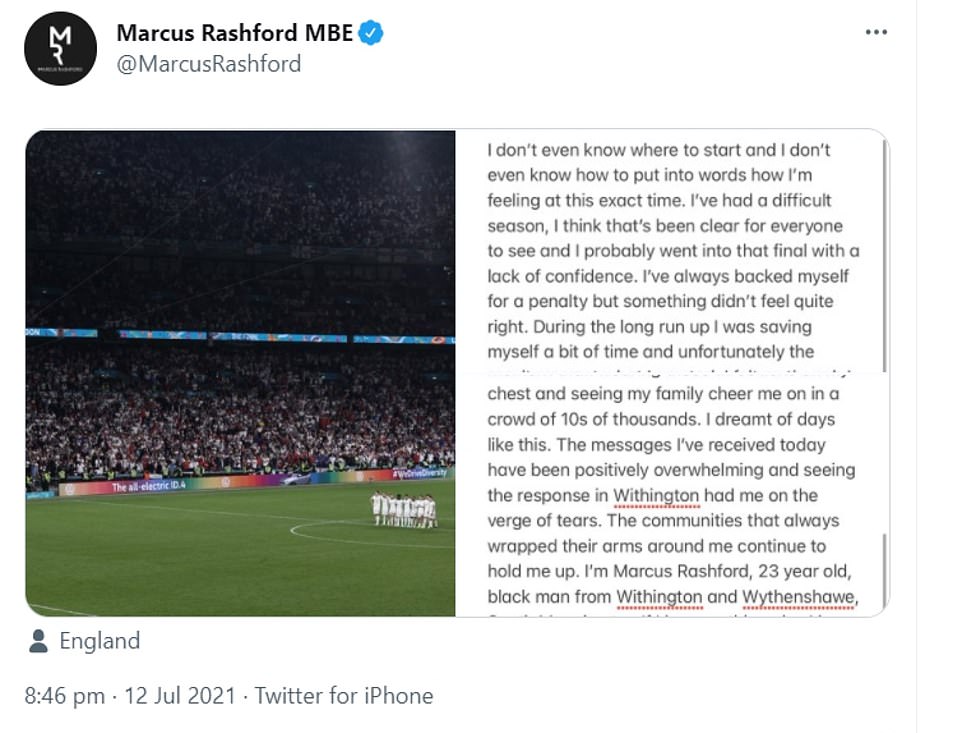 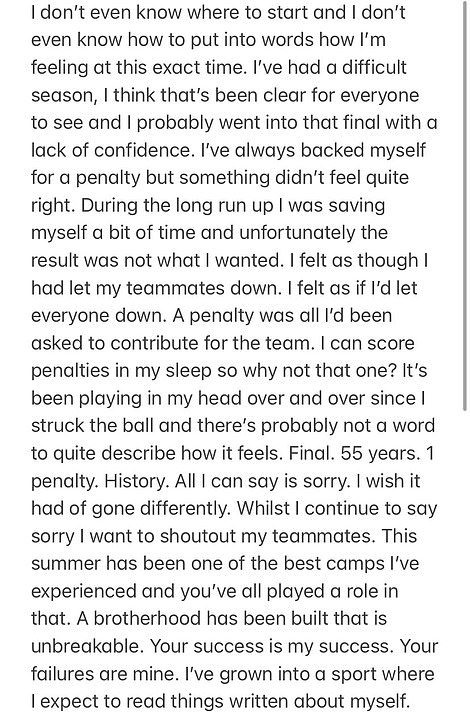 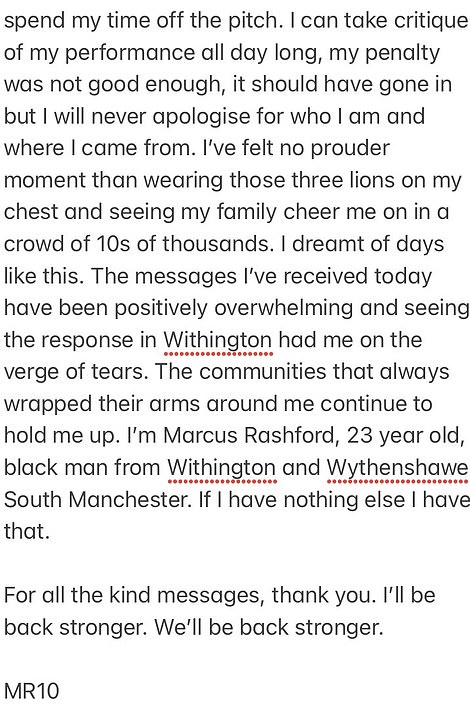 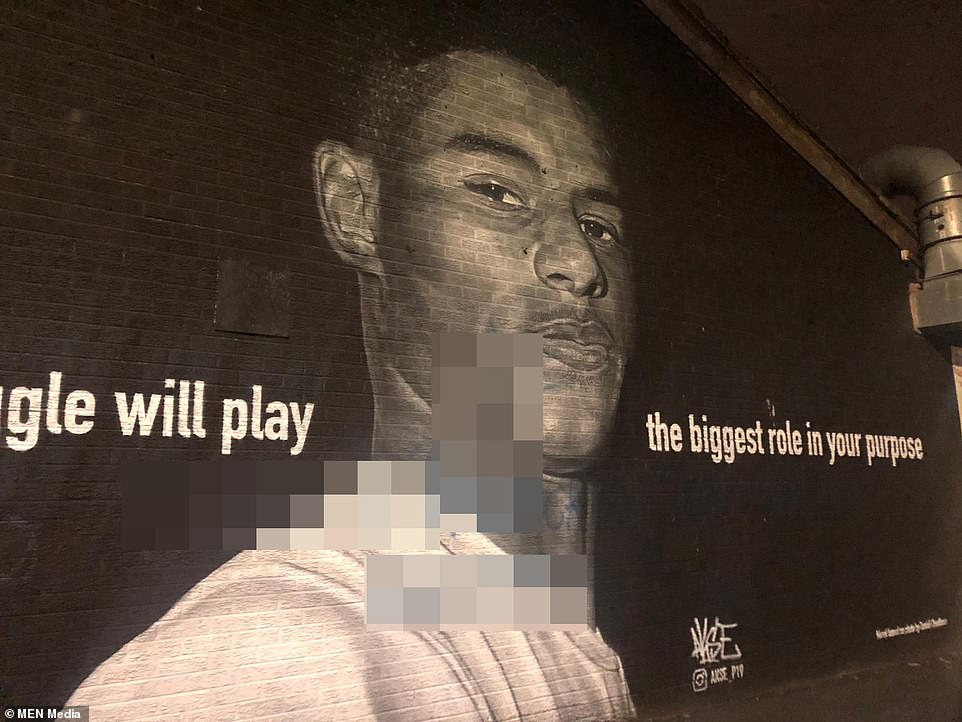 The artwork, which was created by French-born artist Akse in November 2020, was defaced in what is being investigated by police as a possible ‘hate crime’ 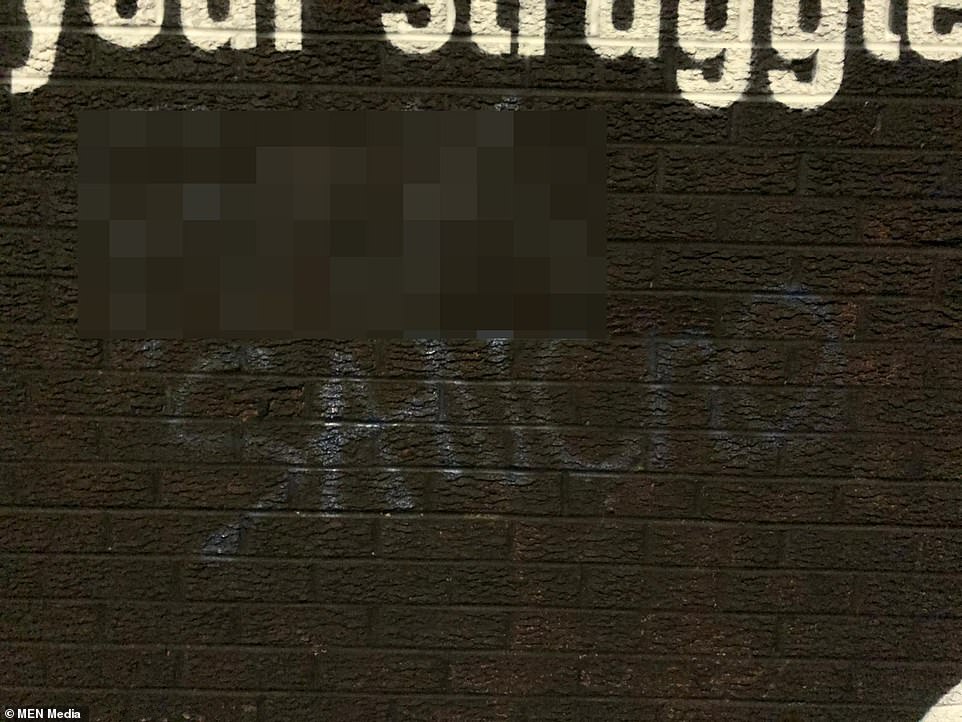 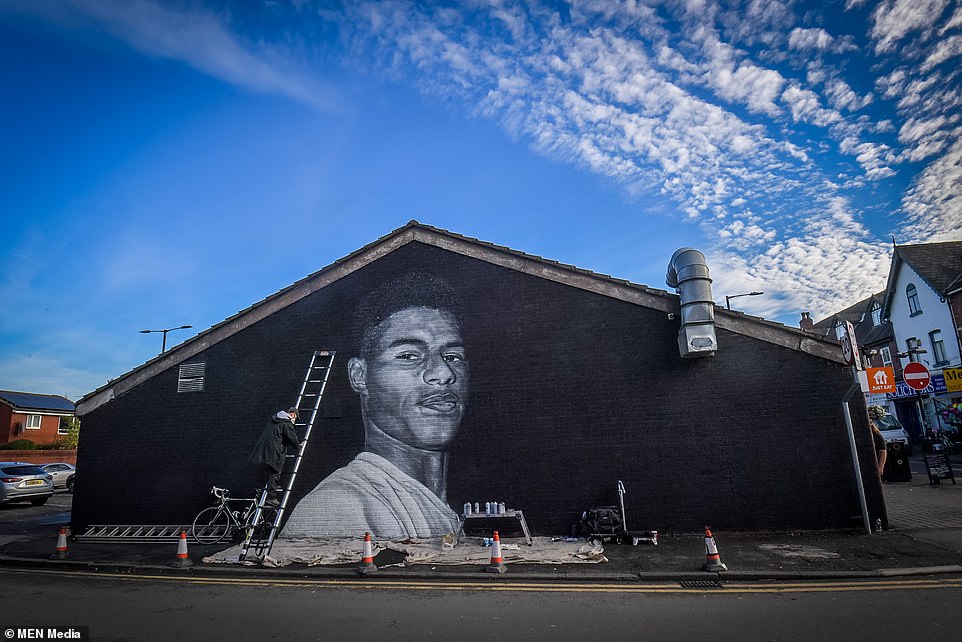 The mural (pictured during creation) on the wall of the Coffee House Cafe in Withington, Manchester, depicts Rashford alongside the phrase: ‘Take pride in knowing that your struggle will play the biggest role in your purpose’

The Duke of Cambridge said he was ‘sickened’ by the racist abuse and called vile slurs at players ‘totally unacceptable’.

William, who was at the game on Sunday with his wife Kate Middleton and their seven-year-old son Prince George, called for those behind the messages to be punished.

In a statement, the duke said: ‘I am sickened by the racist abuse aimed at England players after last night’s match. It is totally unacceptable that players have to endure this abhorrent behaviour. It must stop now and all those involved should be held accountable.’

It came as Savills estate agent launched an investigation after claims a member of staff had been behind one of the messages.

A spokesperson said: ‘Savills abhors and has zero tolerance to any form of racism and racial discrimination and is appalled by the racist comments in these tweets.

‘Savills is immediately investigating and will take appropriate action.’ 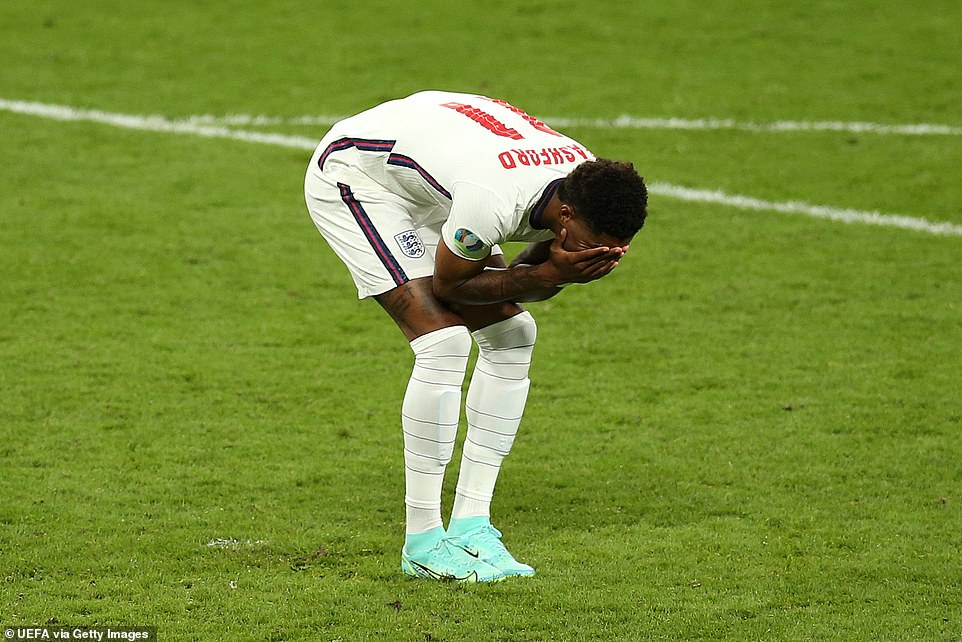 Mr Johnson echoed the Football Association’s condemnation of those attacking the players after the team lost to Italy. He said: ‘This England team deserve to be lauded as heroes, not racially abused on social media. Those responsible for this appalling abuse should be ashamed of themselves.

She said: ‘Players who have given so much for our country this summer have been subject to vile racist abuse on social media. It has no place in our country and I back the police to hold those responsible accountable.’

Racist social media users instantly took to the accounts of the three black players who missed penalties in last night’s clash against Italy.

The horrific comments, including racist language and emojis, have led to the FA condemning its racist fans and saying they are not ‘welcome in following in the team’ and the Metropolitan Police has confirmed its officers will be investigating. 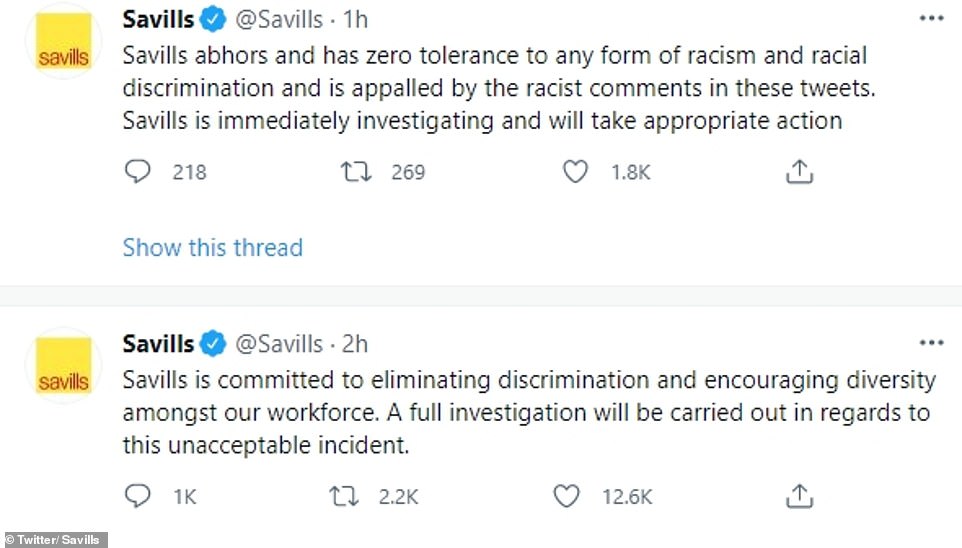 Thousands of others rallied to support the players, especially Saka, who lit up the tournament for England at the age of just 19.

Calling on those behind the abuse to face arrest and prosecution, one fan said: ‘I’ll take these three Englishmen over any racist-moron-fake-fan every day of the week and twice on a Sunday’.

A spokesman said: ‘The FA strongly condemns all forms of discrimination and is appalled by the online racism that has been aimed at some of our England players on social media.

‘We could not be clearer that anyone behind such disgusting behaviour is not welcome in following the team. We will do all we can to support the players affected while urging the toughest punishments possible for anyone responsible. 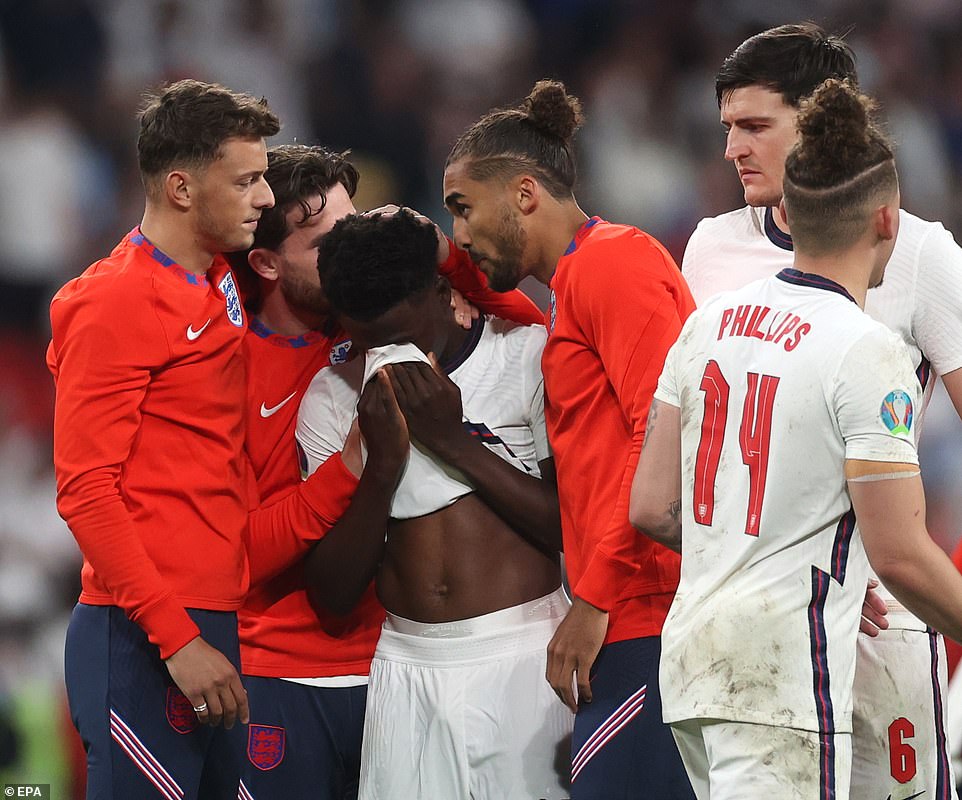 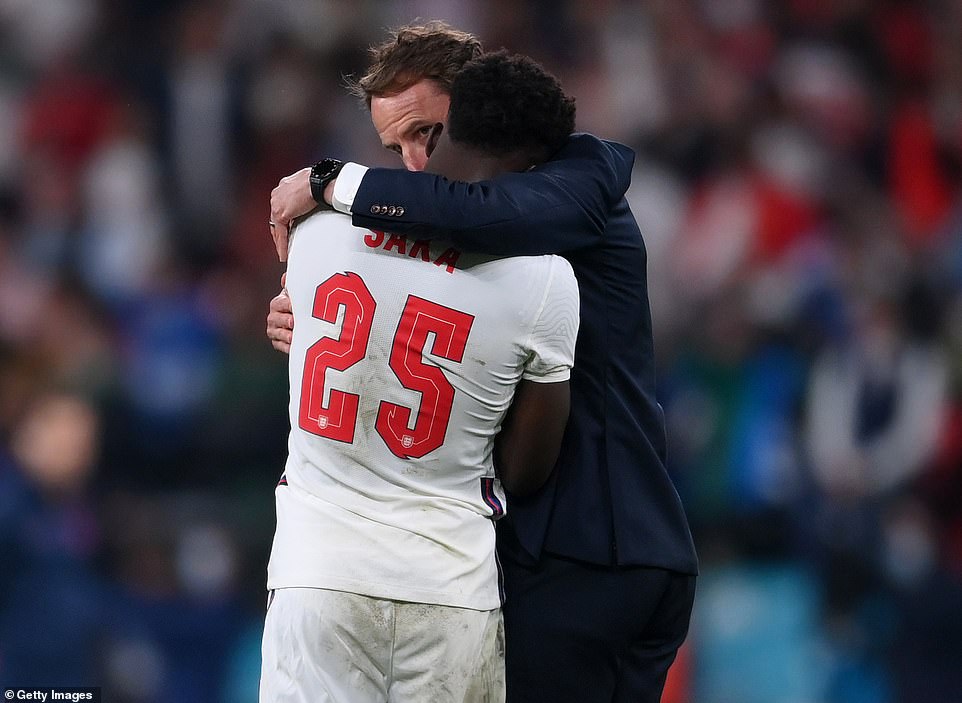 ‘We will continue to do everything we can to stamp discrimination out of the game, but we implore government to act quickly and bring in the appropriate legislation so this abuse has real life consequences.

‘Social media companies need to step up and take accountability and action to ban abusers from their platforms, gather evidence that can lead to prosecution and support making their platforms free from this type of abhorrent abuse.’

And the Metropolitan Police confirmed it will be investigating the abuse and said: ‘We are aware of a number of offensive and racist social media comments being directed towards footballers following the #Euro2020 final.

‘This abuse is totally unacceptable, it will not be tolerated and it will be investigated.’

England players have taken the knee to support anti-racism drives throughout the tournament, a move that has drawn vocal criticism and boos from a section of their support.

In turn the FA and senior players have attacked the boo-boys in the stands, stating their actions are precisely why the team feels a need to make a stand against racism.

England lost the penalty shootout 3-2 after the match finished 1-1 after extra time.

is, Marcus, mural, of, Rashford, re
You may also like: