A private investment group is pitching to spend $25 billion on what would be one of the biggest infrastructure projects in Australian history – the construction of 9000 apartments in a string of towers above the rail lines between Flinders Street and South Yarra stations.

The project would not need investment from the Victorian government, with the group saying it would pay the state more than $6 billion upfront for air rights before recouping its outlay when commercial and residential property from up to 24 buildings – which would include a school, a TAFE and nine hectares of new green space – is sold.

But one planning expert has warned the Andrews government – which did not commission the plan – should be “very cautious” in its approach to the project.

The chain of apartment towers, restaurants, shops, offices and landscaped green areas, which would connect Melbourne’s CBD with the city’s major sporting venues, has been proposed by Connex Capital, an alliance of property and infrastructure investors.

“This is a nation-building project,” the project’s spokesman, Sam Almaliki, said. “It’s a once-in-a-generation opportunity to deliver a significant economic and social benefit, affordable housing and connectivity between Federation Square and Richmond and cultural and sporting hubs.”

An Andrews government spokeswoman said the government often received unsolicited proposals and “we’re always open to discussing new and exciting ideas for Victoria”. Mr Almaliki said the group was in talks with the government. 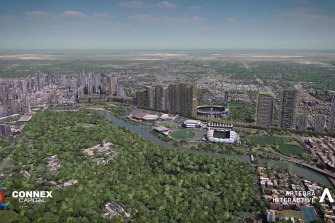 The plans involve a string of apartment blocks above the rail lines between Flinders Street and South Yarra stations.

The project has been submitted as part of the government’s market-led proposal scheme – which allows private groups to suggest projects – but has not progressed to formal consideration. Due to the confidential nature of the process and the bid being commercial in confidence, Connex Capital declined to publicly disclose the entities financing the project.

Connex Capital includes investors from Britain, the United Arab Emirates, the US and Australia. The chief financial backer is one of London’s largest private equity funds. A source speaking anonymously said Sydney-based property investment firm Blue Chip Capital was involved in the bid.

Professor Jago Dodson, director of RMIT’s Centre for Urban Research, said the proposal was “very interesting” but he questioned whether, in the pandemic era, when suburban hubs have boomed as employees work from home, there was a need for more housing supply near the CBD. 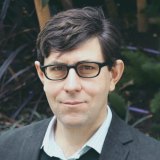 RMIT’s Jago Dodson has reservations about the project.

“Market-led proposals inevitably serve the interests of the private sector proponent because they are looking to extract profit, so the Victorian government would need to be very cautious about what it agrees to and the terms of the agreement,” he said.

Professor Dodson said the government would also need to closely examine whether a development so close to the CBD aligned with its plans to develop precincts at Arden in North Melbourne and Fishermans Bend in the city’s west.

The plan also includes the redevelopment of the ageing Richmond station and the MCG’s Great Southern Stand – which has not been upgraded since it was built 30 years ago – contributing to a project the group believes will take 10 years to complete, inject $60 billion into the economy and create $40 billion in tax revenue for the Victorian government over 40 years.

It is estimated that the carbon-neutral development, which is backed by lord mayor Sally Capp and football and TV powerbroker Eddie McGuire, would create 25,000 direct jobs. It would use a bridging technology that allows construction to proceed above the three kilometres of rail lines without disrupting train services.

Connex Capital is pledging to build a K-12 vertical school, an electric car hub with tens of thousands of car spaces, 2000 affordable and social housing units, and a TAFE to train workers to build the development. 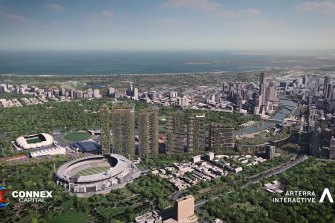 The project would connect the CBD to Melbourne’s main sporting precinct.

Plans show the Yarra would not be overshadowed by high-rise buildings but sections of Melbourne Park precinct will be shadowed.

McGuire, a proponent of the rail track project, said the MCG needed to be upgraded to ensure Melbourne retained its pre-eminence in attracting major events, because new stadiums such as Perth’s Optus Stadium were more cutting-edge.

He said the development had the potential to link the Botanical Gardens, Fitzroy Gardens, Yarra Park and Birrarung Marr – emulating New York’s Central Park – and said the redevelopment of Richmond station could allow people to walk off a train straight into the MCG.

“This isn’t about putting a few apartment blocks up,” he said. “If you do this in a sensitive way, it turns it into the most unbelievable passive recreation and green lung for Melbourne.” 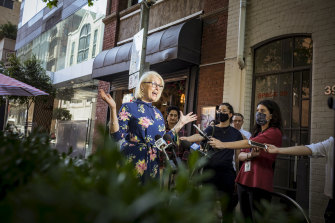 “I get excited when people come up with plans like this and there’s a financial basis to it; to re-imagining what our city looks like.”

Cr Capp said she was impressed by the track record of the investors based on her assessment of the project’s prospectus.

“It represents a project of significance, a confidence that investors have in Melbourne’s future, and a confidence in the possibilities that are still to be unlocked in the city that add value in a private and public sense,” she said.

The rail tracks east of Flinders Street Station have been an eyesore that successive governments have sought to fix. 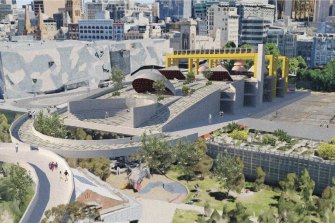 The Federation Square East project did not proceed.

In 2008, the Brumby government announced a plan, called Federation Square East, to cover the tracks east of Flinders Street and create an entertainment and residential precinct.

The plan did not proceed, and five years later the Napthine government embarked on a similar project that was not continued by the Andrews government when it came to power in 2014.

Property Council of Victoria chief executive Danni Hunter said the project sounded promising, so long as the need to develop tall buildings was balanced against the requirement to maintain cultural heritage and open space.

“It would have to be very carefully managed, but this is an untapped precinct for our city that is currently delivering nothing.

“These are city-shaping ideas and what we need in a post-pandemic world. Melbourne’s reputation could be ramped right up if we get that precinct from the sporting area to the city right.”

Greg Bisinella, who is the heritage and planning convener of the East Melbourne Group, said the project sounded ambitious but his group would be “very concerned” about any developments that extended beyond the Hoddle Grid.