When the NSW government first confronted the Delta outbreak in mid-June, it rolled the dice. Instead of going hard and fast into lockdown, as other states had, it turned to its previously successful playbook of relying on its contact tracers to keep the virus in check.

At the time, NSW Premier Gladys Berejiklian insisted that “we have always said we won’t burden our citizens unless we absolutely have to … We rely on people’s common sense as much as what the health orders say.” It was a high-stakes gamble. 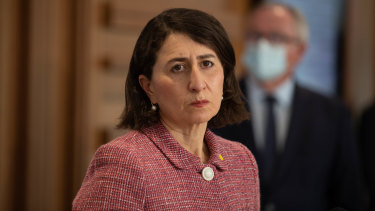 NSW Premier Gladys Berejiklian must shoulder the blame for this outbreak.Credit:Janie Barrett

Just how much of a risk was estimated by University of Melbourne epidemiologist Tony Blakely, whose modelling influenced the Victorian government’s response to last year’s second wave and who put the odds of NSW succeeding at a bit less than 50-50 because of its soft lockdown, describing as “bonkers” that people then could still attend gyms.

As infections continued to grow in Sydney, so did the odds that more restrictions would be needed. And so they were. First came the stay-at-home orders for the local government areas most affected by infections. The following day, the whole of Sydney was put under the same restrictions. Students were told to learn from home. Over coming weeks, all non-essential businesses were shut – the rules on which businesses were essential or not were vague at first – the construction industry was told to down tools, a national emergency was declared, and the pleas for Sydneysiders to follow the rules and get vaccinated grew louder.

And yet the number of infections has kept rising. On Thursday, the number of positive cases jumped to 239, the state’s biggest one-day total since the pandemic began. Even more restrictions were introduced and penalties and enforcement stepped up.

Watching from south of the border has been frustrating. Had NSW not learnt from our well-publicised mistakes? Last year, our hotel quarantine program and contact tracing were not up to scratch. Restrictions were enforced too slowly in the second lockdown. Criticism came thick and fast from many quarters, including from The Age.

And yet for all the rhetoric coming out of Canberra about the national cabinet being an ideal forum for sharing lessons learnt, NSW has succumbed to repeating some of our failures. Only now is NSW enforcing restrictions that should have been implemented weeks ago, ensuring its lockdown will be longer and harder.

In recent days, it has shifted direction again to emphasise the importance of vaccination. Of course vaccinations are crucial, but we will not be vaccinated at the rate needed to end this crisis for many months. It’s the lockdown that will get NSW out of this, and the government has had to be dragged kicking and screaming to accept this fact. NSW people are paying the cost, but so too are the rest of us.

NSW has all the advantages of a first-rate contact tracing team and its testing program has proved more than capable of managing an enormous upsurge in demand. And it’s not like the highly infectious nature of the Delta variant is a new phenomenon. It has been raging around the globe for many months. The evidence and deadly consequence of its rapid spread was on the record by the time it hit Sydney.

The straight answer is the Sydney outbreak is a failure of political leadership. We say that with no joy – this is a hellish problem and mistakes are inevitable – but there is no point in shirking it. It is inconceivable that, if Ms Berejiklian had her time again, she would not do things differently, but somehow the idea that NSW had some kind of exceptional handle on this crisis has proved nothing but hubris. The lessons were there, and Ms Berejiklian chose to ignore them.

While we hope the virus is quashed within the next four weeks, there is now a real possibility Sydney will have to endure some form of lockdown until enough people are vaccinated to make it safe to open. According to the Grattan Institute, that figure could be as high as 80 per cent. Even then, that would leave about 1 million Sydneysiders unvaccinated.

There is no shortage of rivalry between the two cities, and there is little point in it. There would be few Melburnians who would not still be haunted by the long lockdown of 2020. We wish our northern neighbours well, but without honesty from its government, the lessons from the Sydney outbreak won’t be learnt either.

cost, leader, nation, NSW, of, Pays
You may also like: