A North Carolina husband and wife have been arrested in connection to a 30-year-old cold case involving an infant whose body was stuffed in a trash can in the Outer Banks after advanced DNA analysis identified the couple as the parents of the badly beaten and suffocated baby.

Scott Gordon Poole, 54, and his wife, Robin Lynn Byrum, 51, both of Taylorsville, North Carolina, were arrested on Oct. 21 by the Alexander County Sheriff’s Office. Each was charged with concealing the birth of a child, which is a first class felony, and more charges are expected to follow pending further investigation, the Nags Head Police Department said in announcing the arrests Monday.

At 10 a.m. on April 4, 1991, police officers in the town Nags Head, in North Carolina’s Outer Banks, were dispatched to the 8600 block of East Tides Drive after the human remains of an infant were found in a trash can rack. Officers couldn’t establish the gender due to decomposition, police said.

It was later determined by the Pitt County Medical Examiner’s Office in Greenville that the child died by blunt force trauma to the face and asphyxiation, according to the Alexander County Sheriff’s Office, which was contacted eight months ago by Nags Head police in reference to the cold case.

“The tragedy of this child’s death and the manner in which his body was disposed of is compounded by the fact that, until now, no one has been found responsible for this incredibly heartbreaking act,” Nags Head Police Chief Phil Webster said in a statement. “But, through the hard work of Nags Head Police investigators and our law enforcement partners in the case, those who did this will be held accountable for a death that has remained unsolved for three decades.” 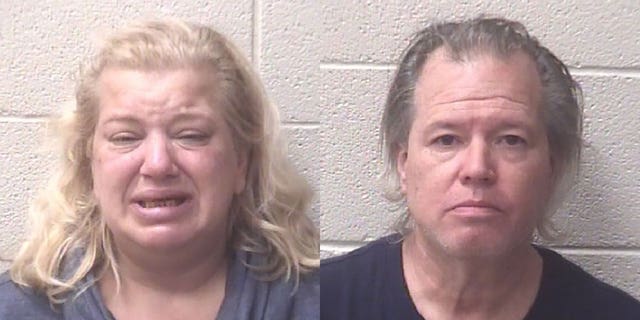 Robin Lynn Byrum, left, and her husband, Scott Gordon Poole, were identified as the parents of a newborn dumped in Outer Banks trash can 30 years ago.
(Nags Head Police Department)

Over the years, Nags Head’s police investigators “have examined and re-examined evidence in the case, working to find who was responsible,” according to the department. In 2019, officers began another re-investigation of the case, sending the unidentified infant’s rib bone to Othram, a private lab in The Woodlands, Texas, for forensic analysis. The lab recovered human DNA from the bone and used that hereditary material to conduct a genealogical profile, which led to a family in North Carolina.

Further investigation by Nags Head detectives led to the individuals who were arrested, police said. It was believed that Byrum was living on the Outer Banks during the time the deceased infant was found.

In August, investigators from the police department, sheriff’s office and North Carolina’s State Bureau of Investigation conducted an operation to obtain DNA from Poole and Byrum. The DNA sample confirmed that they both were the parents of the deceased infant, authorities said.

A search warrant was executed on the couple’s residence on Sam Poole Ln. in Taylorsville last Thursday before arrest warrants were handed down later that afternoon and both Poole and Byrum were taken into custody. They each remained at the Alexander County Detention Center on a $250,000 bond and were later transferred to Dare County Detention Center.

“These arrests are a result of many years of diligent investigation by our highly-trained and dedicated law enforcement professionals,” Nags Head Mayor Ben Cahoon said. “While they are responsible for responding to accidents and crimes, they must also defend the innocent. This is a true example of that. The Board and I appreciate their diligence in working to solve this crime.”

Alexander County Sheriff Chris Bowman said his office was grateful to be able to help bring closure in the 30-year cold case, stressing “the importance of teamwork in these types of investigations.”