Billionaire Walter Scott, the former CEO of the Kiewit construction firm who helped oversee Warren Buffett’s conglomerate and donated to various causes in his hometown of Omaha, Nebraska, died Saturday at age 90.

The Suzanne and Walter Scott Foundation did not mention a cause of death.

Scott was a childhood friend of Buffett’s and was a a board member of his Berkshire Hathaway conglomerate from 1988 until his death.

His net worth is estimated to be about $4.2 billion, according to Forbes. He recently said most of his money will be left behind to his personal foundation to help build up his hometown. 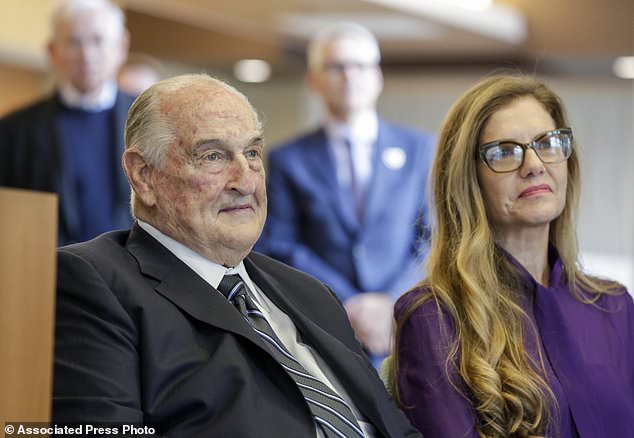 Walter Scott, left, died Saturday at age 90. Above, he sits next to Leslie Jackson, wife of glass artist Dale Chihuly, during a ceremony in Omaha, Nebraska in May 2017 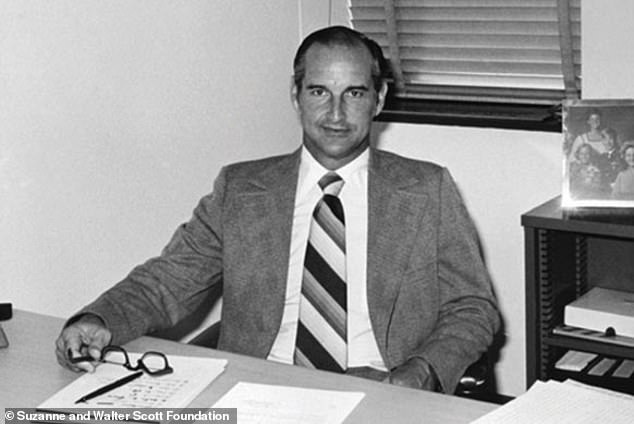 Scott earned a bachelor’s degree in civil engineering from Colorado State University in 1953. He later donated $53.3 million to the college, the largest gift in its history 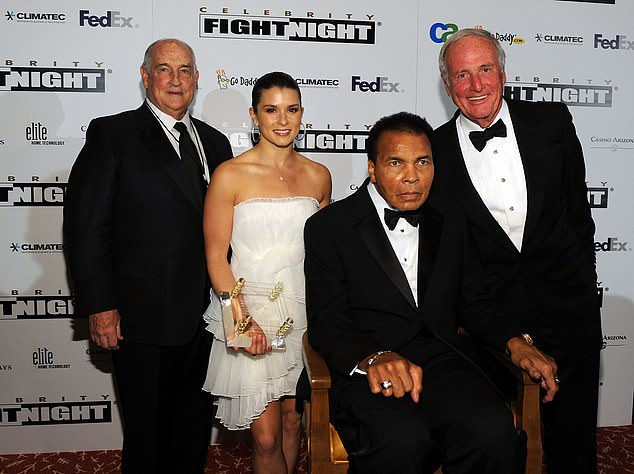 Scott, left with racer Danica Patrick and Muhammad Ali in 2010, spent his entire career at the Omaha-based construction company Kiewit, which has built projects around the world 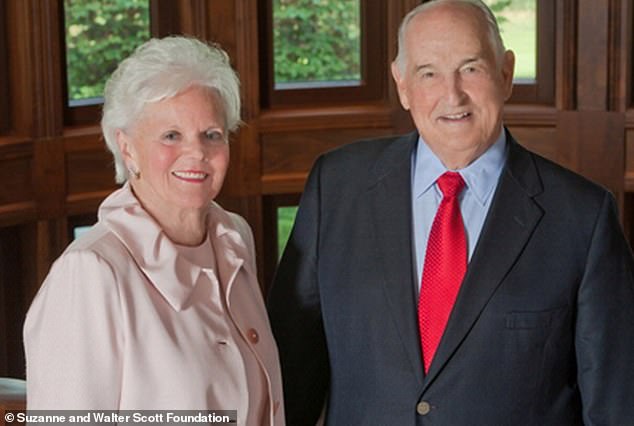 Scott and his wife Suzanne, left, have given about $500 million since 2001 to various causes

Scott invested alongside Berkshire in the company’s utility and energy unit. He held about 8 percent of Berkshire Hathaway Energy’s stock and 105 Class A Berkshire shares, with Buffett’s Berkshire holding nearly all the rest.

Scott was born in Omaha, Nebraska in 1931 and grew up during the Great Depression.

He graduated from Colorado State University, then Colorado A&M, with a bachelor’s degree in civil engineering in 1953, according to the college .

He donated $53.3 million to the university in 2016 – the largest gift in its history. The university renamed its engineering school the Walter Scott, Jr. College of Engineering in his honor.

An examination of foundation’s tax records shows his charitable grants since 2001 alone have exceeded $500 million, according to the Omaha World-Herald.

Scott spent his entire career working for Peter Kiewit Sons’ Inc. – the Omaha-based construction company that builds major projects all over the world. 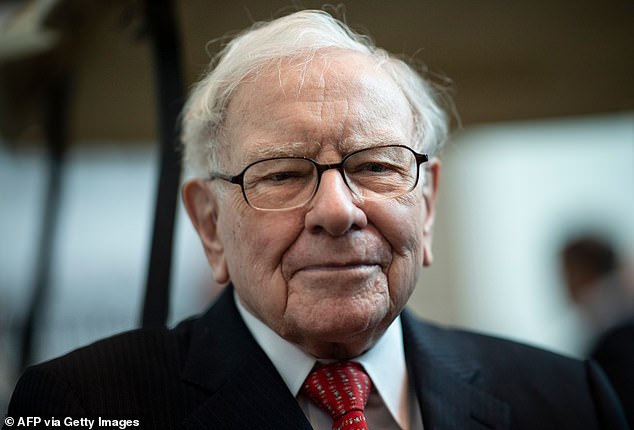 Buffet, 91, was a childhood friend of Scott’s. Scott helped oversee Buffet’s Berkshire Hathaway conglomerate until his death on Saturday. Buffet’s net worth stands at over $100 billion

The construction company began building the US military Thule Air Base in Greenland in 1951. It also built the 63rd Street subway tunnel between Manhattan and Queens and the seven-mile San Mateo-Hayward bridge over San Francisco Bay, according to The New York Times.

Scott worked his way up from overseeing construction projects in California and New York to become the company’s executive vice president in 1965.

When Peter Kiewit died in 1979, Scott succeeded him as Chairman and CEO. He also went on to serve as chairman of a Kiewit spin-off, Level 3 Communications, until that firm was bought in 2014.

He retired as CEO of Kiewit in 1998, leaving it as the country’s seventh-largest construction company.

‘I’ve tried to be a good steward of what (Peter Kiewit) left,’ Scott said at the time.

‘You cannot find a better model for a citizen than Walter Scott,’ Buffett, a longtime friend, told the Omaha World-Herald on Saturday.

‘He was basically a builder, whether he was building Kiewit and physical things or building his vision of Omaha or Nebraska. He was nonstop.’ 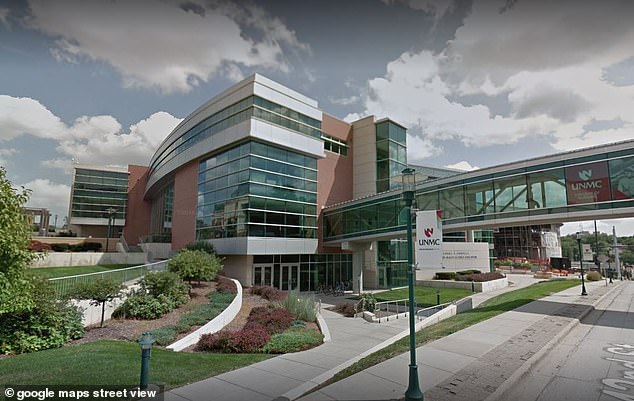 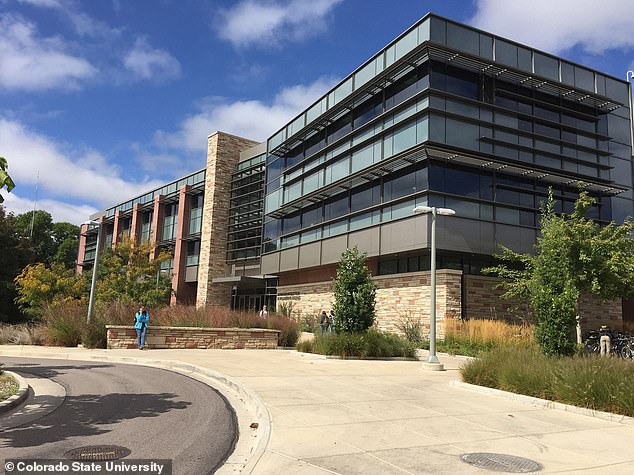 The wealth Scott accumulated allowed him to become a philanthropist.

One of the main buildings at UNMC’s new Fred and Pamela Buffett Cancer Center is called the Suzanne and Walter Scott Cancer Research Tower because of their donations.

Sections of the Joslyn Art Museum and Holland Performing Arts Center in Omaha are also named in honor of the Scotts’ giving.

Scott was also a longtime supporter of the renowned Omaha zoo, where the large aquarium is named in honor of him and his wife.

The billionaire philanthropist had told the Omaha World-Herald that he intended for nearly all of his personal assets to be donated to his personal foundation, which supports projects in Omaha.

‘My children were taken care of long ago – what they make of their lives is now their own responsibility,’ Scott said to the World-Herald.

‘Ultimately, nearly everything will go to the foundation, with the hopes it will benefit my hometown for many generations to come.’

Walter has been a director of numerous charitable and educational organizations and served as chairman of the boards of the Omaha Zoological Society, Omaha Zoo Foundation, Joslyn Art Museum, Horatio Alger Association, Heritage Services and the Board of Policy Advisors for the Peter Kiewit Institute.