The British rower honoured for crossroads attack, the Polish long-distance champ murdered by the Gestapo and the Dutch gymnasts who perished in Auschwitz: New book remembers Olympian heroes who died in World War Two

The tragic stories of almost 500 Olympians who were killed during the Second World War – including Jewish participants who perished in concentration camps during the Holocaust – have been revealed for the first time in a new book.

While this year’s Tokyo Olympics competitors are producing extraordinary feats in the world of sports, the Olympians who fell during the last major European war displayed heroism of a completely different order.

Dozens of athletes died carrying out acts of gallantry in some of the war’s major battles, including during the Allied invasion of the Continent – while almost 60 Jewish participants were killed in Nazi concentration camps in Central and Eastern Europe.

Historian and screenwriter Nigel McCrery, who created the BBC TV series’ Silent Witness and New Tricks, has meticulously researched the lives of all these fallen heroes for his new book, The Undying Flame.

The only British gold medallist to die during the war was John Lander, who triumphed in the men’s coxless fours at the 1928 Olympics in Amsterdam and was killed in the Battle of Hong Kong on Christmas Day 1941 aged 34.

The Liverpudlian, who studied at Trinity College, lived in Hong Kong at the outset of the conflict and joined the Hong Kong Volunteer Defence Corps as a gunner. He was posted to One Battery at Stanley Fort before he was killed.

One of the most poignant stories is that of the 1928 Dutch Gymnastics team who won gold at their home Olympics. Of the 12 women in the team, five were Jewish. Four of them were murdered by the Nazis during the war at Auschwitz or Sobibor – Estella Agsteribbe, Anna Dresden-Polak, Helena Kloot-Nordheim and Judikye Simons.

The team’s coach Gerrit Kleerekoper, who was Jewish, was also killed in a concentration camp. 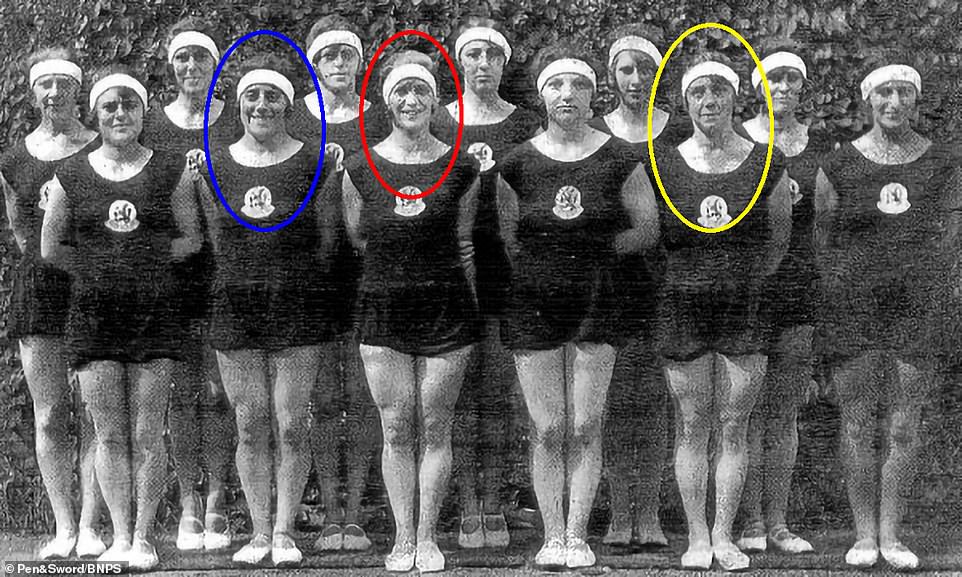 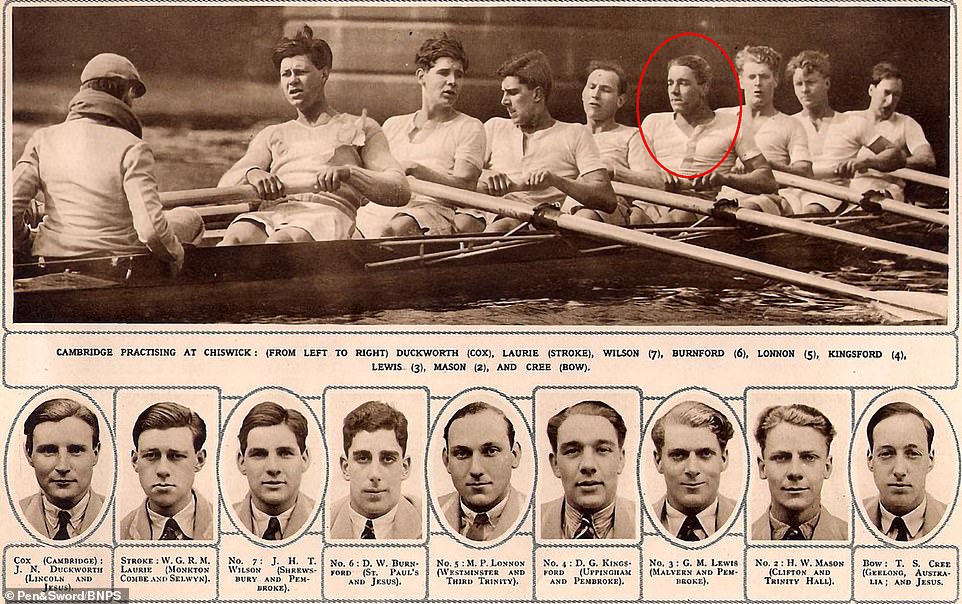 Pictured: 1936 Olympic rower Desmond Kingsford, circled, went on to win the Military Cross but was killed when a shell landed on his tent when he was sleeping in 1944 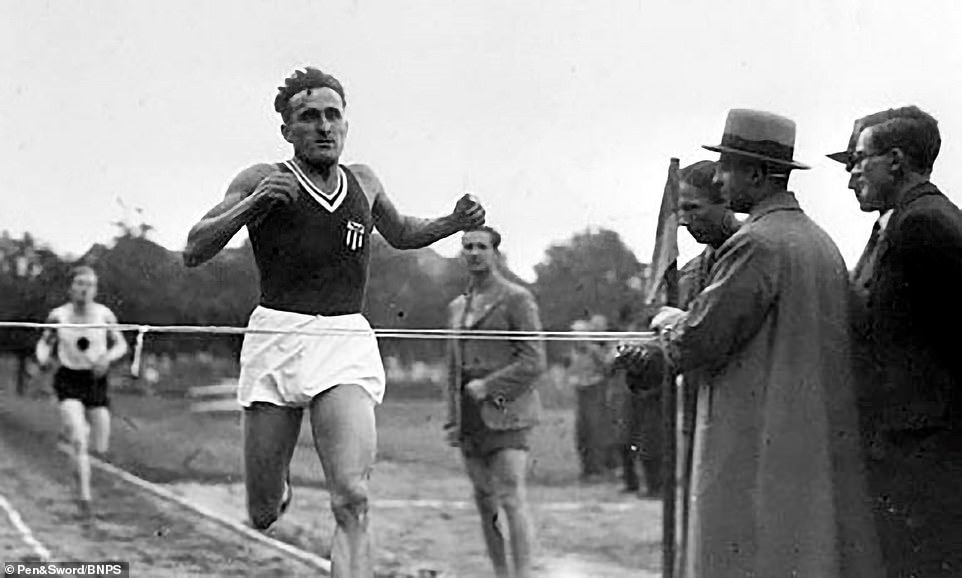 Pictured: Janesz Kusocinski won the 10,000m at the 1932 Olympic Games, he went on to become part of the Polish Resistance before being murdered by the Gestapo

British 1932 Olympics rower David Haig-Thomas, a commando with ‘matinee idol’ looks, took part in the D-Day landings. He landed on marshy ground with the 6th Airborne Division and was ambushed and killed by the Germans.

Fellow Brit, Squadron Leader Jeffrey MacDougall, who competed in the modern pentathlon in 1932 and 1932, was a decorated bomber pilot. He received the prestigious Distinguished Flying Cross for an attack on an enemy aerodrome in Amiens, northern France in November 1940. 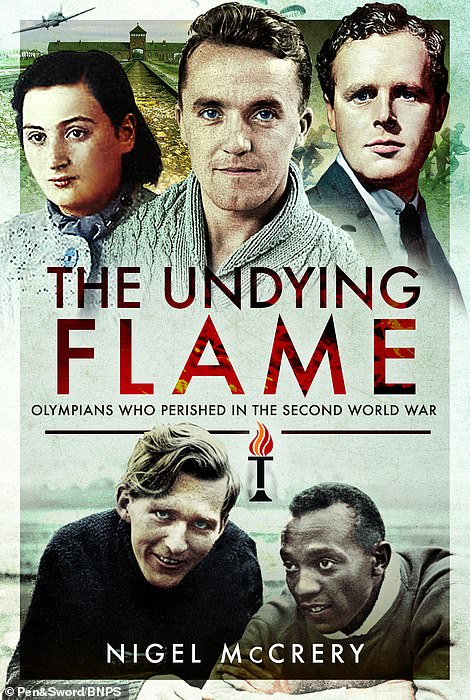 Historian and screenwriter Nigel McCrery, who created the BBC TV series’ Silent Witness and New Tricks, has meticulously researched the lives of all these fallen heroes for his new book, The Undying Flame

He completed 22 operations before he was killed in mysterious circumstances in December 1942.

Irish-born rower Desmond Kingsford, of the Irish Guards, who represented Britain in the 1936 Olympics, was awarded the Military Cross for a bold attack on a crossroads in occupied France in August 1944.

They were peppered with machine gun fire but seized the position owing to Capt Kingsford’s ‘great skill and daring’. He was killed weeks later when a shell struck the tent he was sleeping in.

Polish long distance runner Janusz Kusocinski, who won the 10,000m at the 1932 Olympics, volunteered for the Polish Army after Germany invaded in 1939. He was wounded twice in battle and then signed up for the Polish resistance during the Nazi occupation.

He was arrested by the Gestapo in March 1940 and executed three months later.

Another to perish was French super-athlete and international rugby player Georges Andre, who competed in four Olympics between 1908 and 1924. He participated in the long jump, high jump, 400m, 110m and 400m hurdles, pentathlon and decathlon, winning a silver and bronze.

He was a World War One fighter pilot and worked as a sports journalist before joining the army, losing his life at the hands of German forces during the North African campaign in Tunis aged 1943.

His son Jacques carried on his legacy, competing in the 1948 London Olympics in the hurdles.

One of the German soldiers killed was 1936 Olympics silver medallist Luz Long, who finished second behind the legendary Jesse Owens. Although they were rivals, Long displayed great sportsmanship giving the American some advice before his final jump as he was struggling. 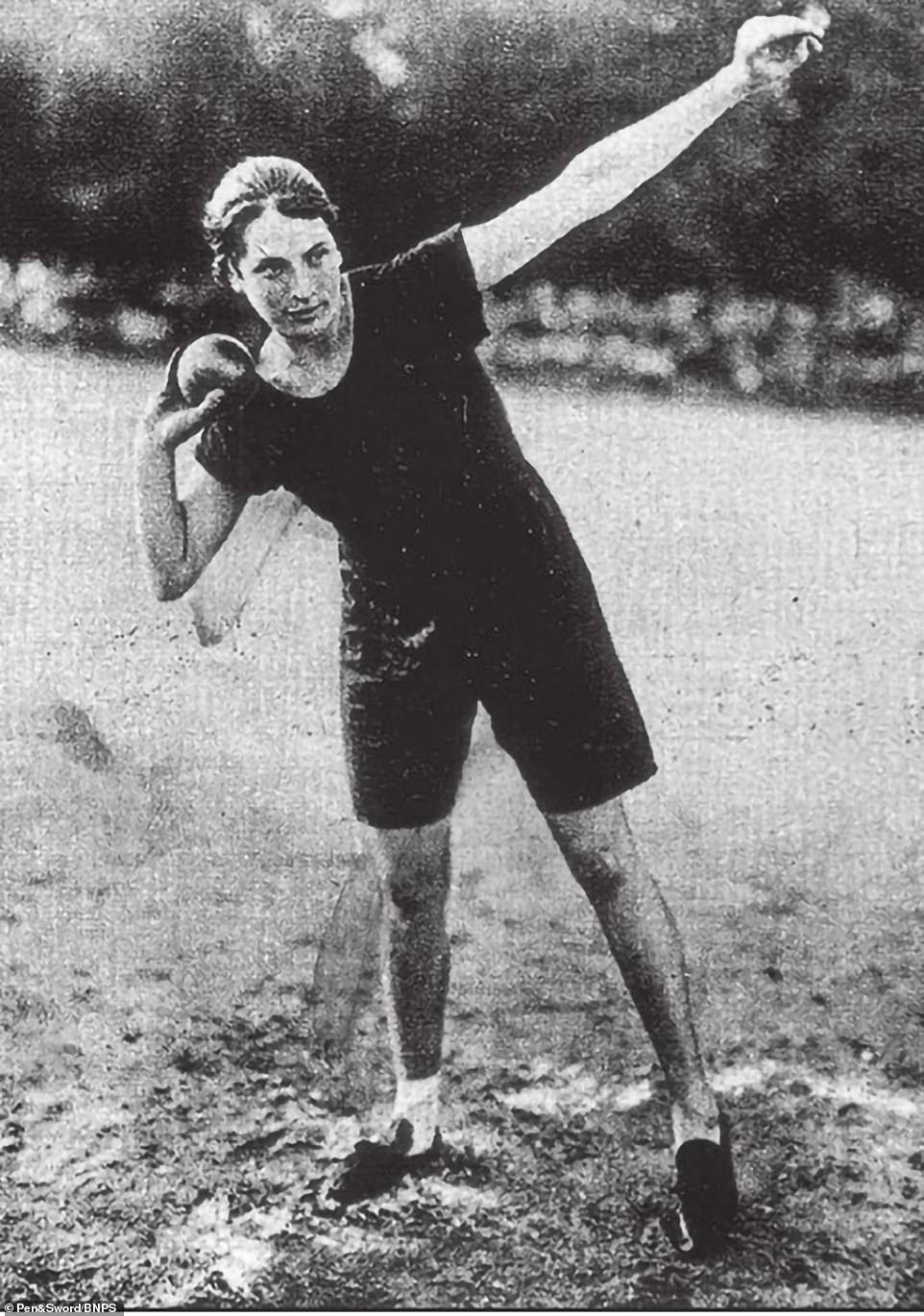 Pictured: Multiple world record holder Lilli Henoch was banned from competing in the 1936 Olympics by Hitler 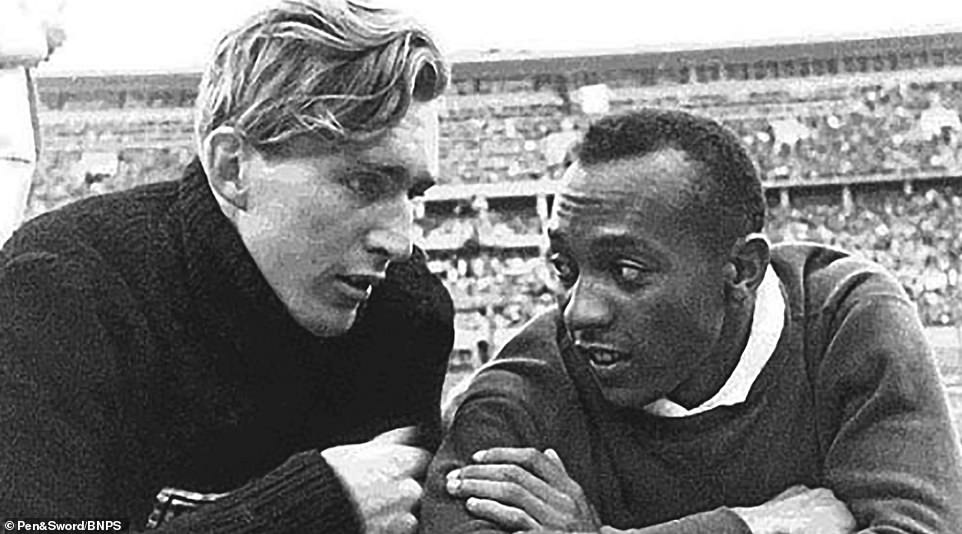 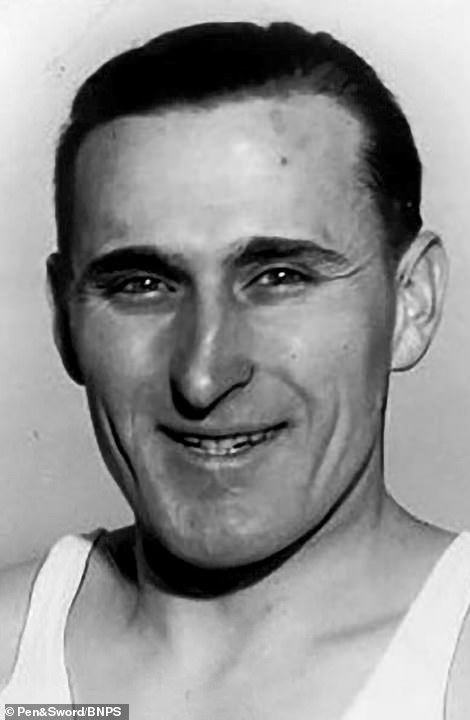 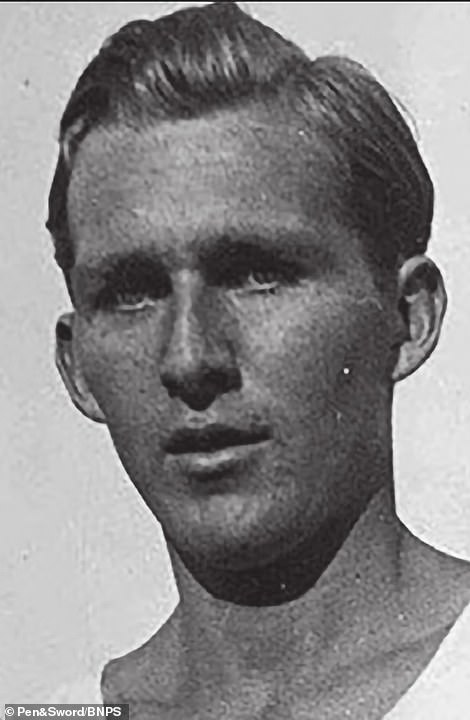 Left: Janesz Kusocinski won the 10,000m at the 1932 Olympic Games and joined the Polish Resistance before being murdered by the Gestapo. Right: Luz Long finished 2nd to Jesse Owens in the 1936 Olympic Games long jump competition 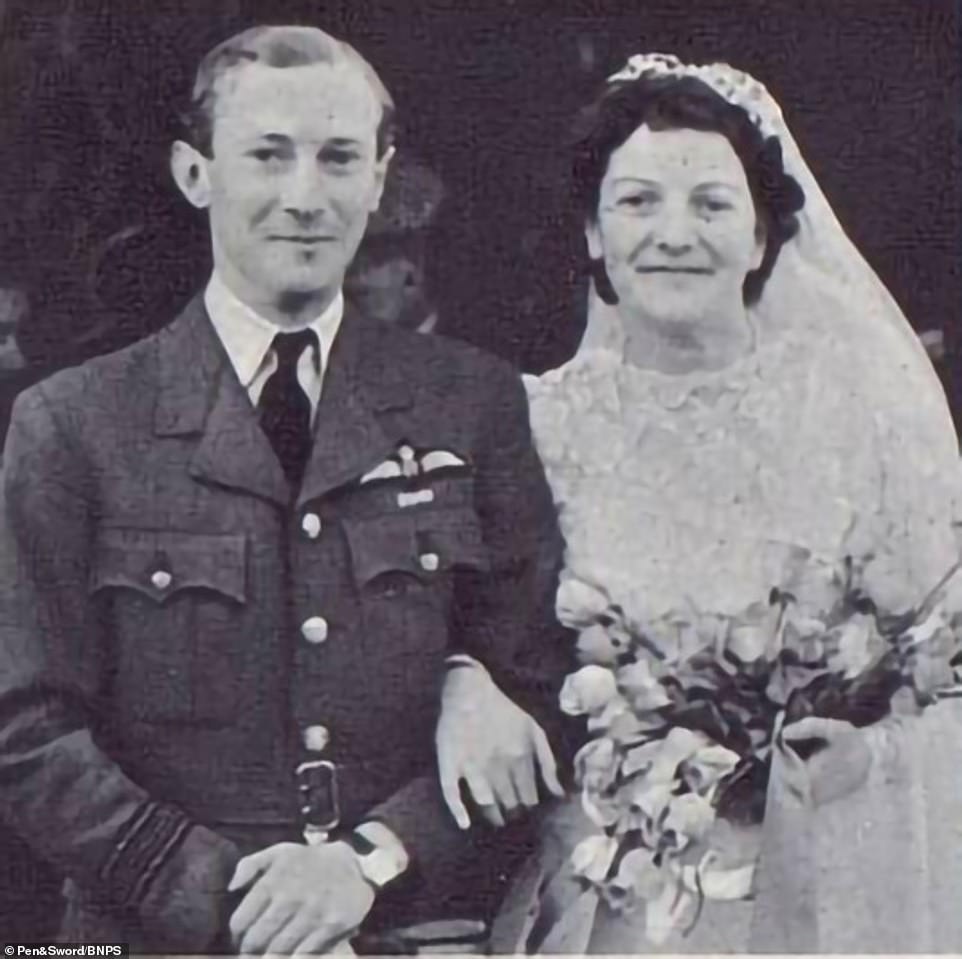 Pictured: World War II bomber pilot Squadron Leader Jeffrey MacDougall competed in the modern penthalon in the 1932 Olympic Games and was killed in 1942

Owens listened intently and jumped a gold-clinching 8.06m, pushing Long into second place, yet he was the first to congratulate the champion. They posed together and left the stadium arm-in-arm, much to the anger of the watching Adolf Hitler.

A close friendship ensued and Owens said of Long: ‘It took a lot of courage for him to befriend me in front of Hitler.

‘I would melt down all the medals and cups I have and they wouldn’t be a plating on the twenty-four carat friendship that I felt for Luz Long at that moment. Hitler must have gone crazy watching us embrace?’

Long, a paratrooper in Sicily, was captured at the San Pietro airfield and murdered by American soldiers in the Biscari Massacre of July 1943.

Mr McCrery has also included one athlete in his book who did not get the chance to compete at the Olympics. 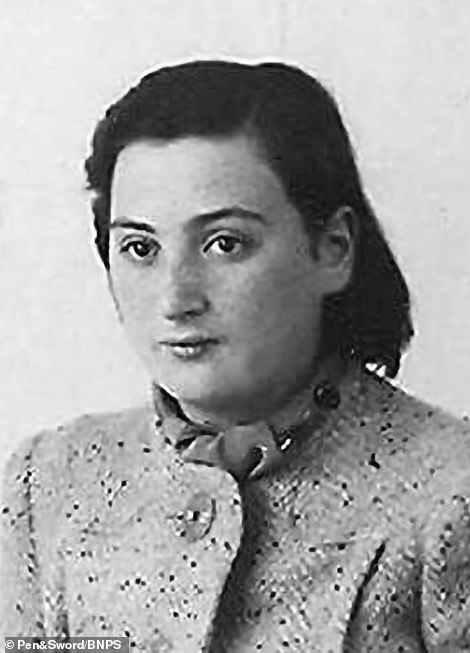 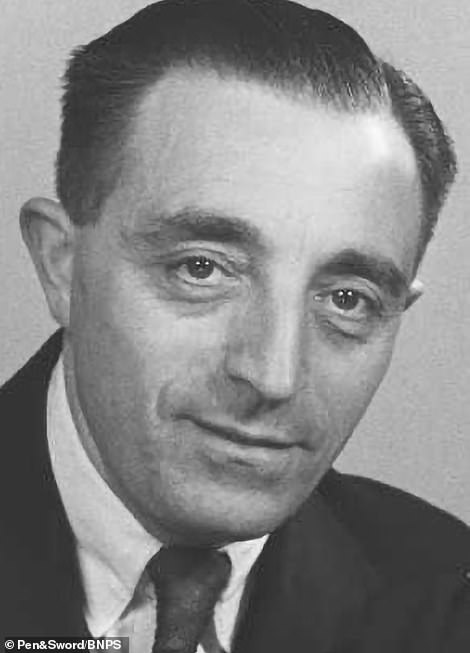 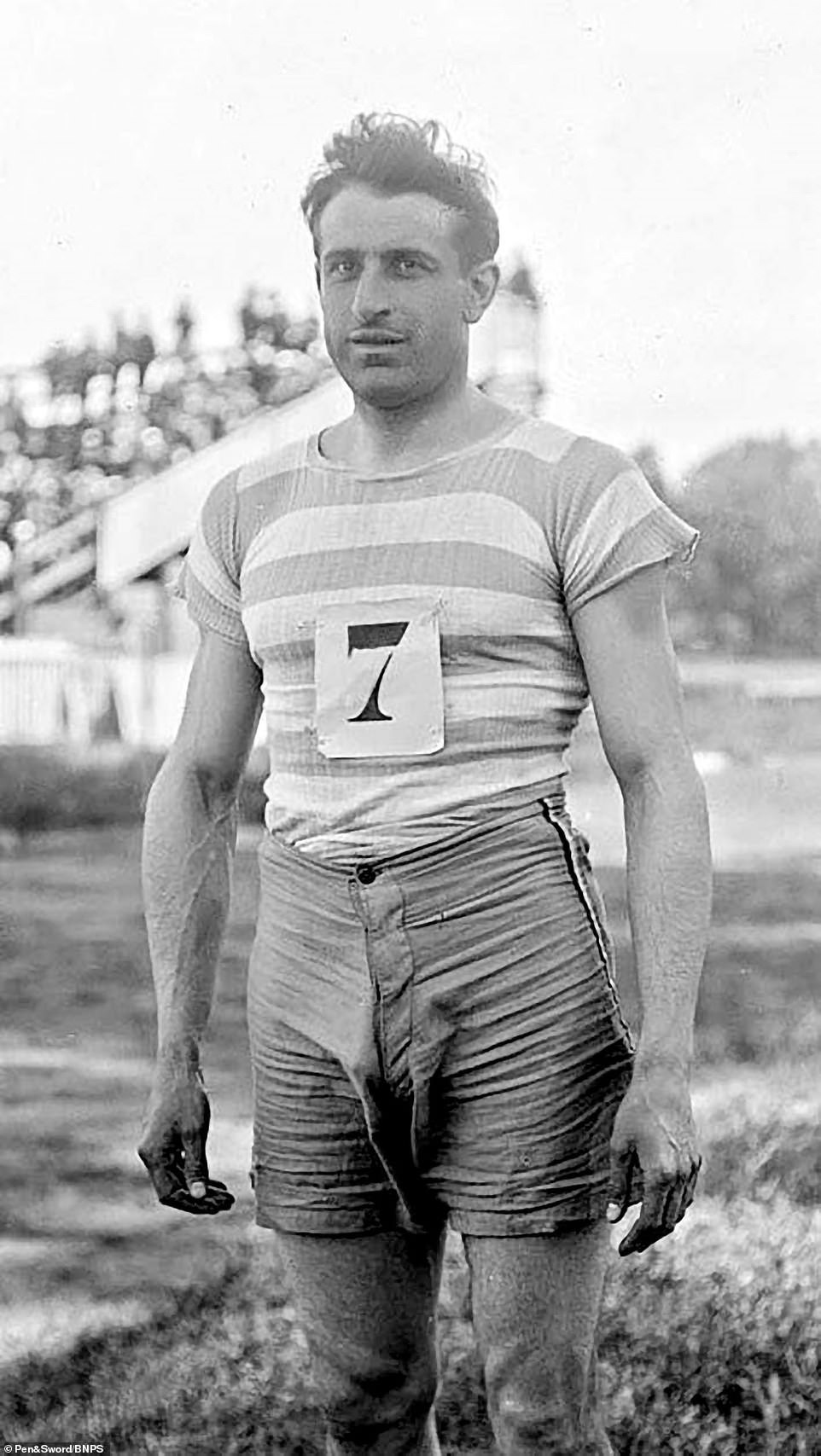 But she was banned by Hitler from taking part in the 1936 Olympics, where she would surely have claimed a substantial medal haul, because she was Jewish. She was deported to a ghetto in Riga, Latvia, and shot by a Nazi murder squad in 1942.

Mr McCrery, 67, who has written over 30 books, said: ‘This book contains short biographies of all those who took part in the Olympic Games before the Second World War, whether they won a medal or not.

‘There are German soldiers in it but the only person I couldn’t bring myself to include in it was a heinous SS general who oversaw massacres.

‘The story of the Jewish Gymnastics Team is particularly tragic and this is the first time in my life I’ve had to stop writing and walk away for a few hours because I was so emotional writing the book.

‘I hope it contributes to honouring these fallen Olympians forever and reminds us of the futility of war.’

The Undying Flame, Olympians Who Perished in the Second World War, by Nigel McCrery, is published by Pen & Sword and costs £20.

book, he, New, Olympian, remembers
You may also like: