Anderson Lee Aldrich, 22, who is nonbinary and uses they/them pronouns, was seen in photos released in unsealed documents leaving his car in the Club Q parking lot with an AR-15 assault rifle at 11.55pm on November 19.

An El Paso County judge also released the documents of Aldrich’s 2021 bomb threat charges that were dropped after their family refused to cooperate.

The black and white photos showed Aldrich with the gun up as they prepared to enter the club. Aldrich immediately shot two people when he entered. 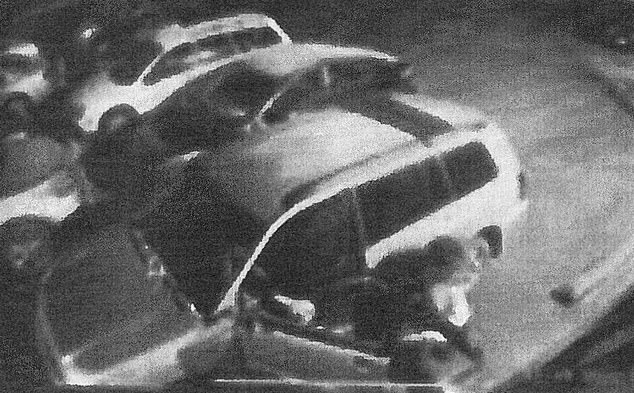 Anderson Lee Aldrich, 22, was spotted in newly released surveillance footage moments before he opened fire at Club Q in Colorado Springs. Aldrich, who is nonbinary and uses they/them pronouns, was seen stepping out of his car with his AR-15 assault rifle at 11.55pm 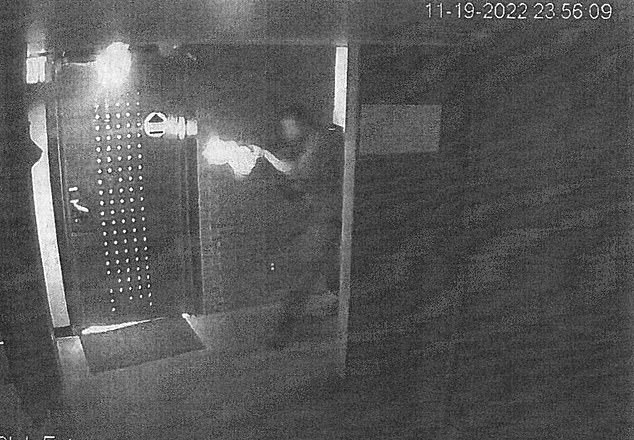 Aldrich was spotted entering the bar with his assault rifle up. He shot two people upon opening 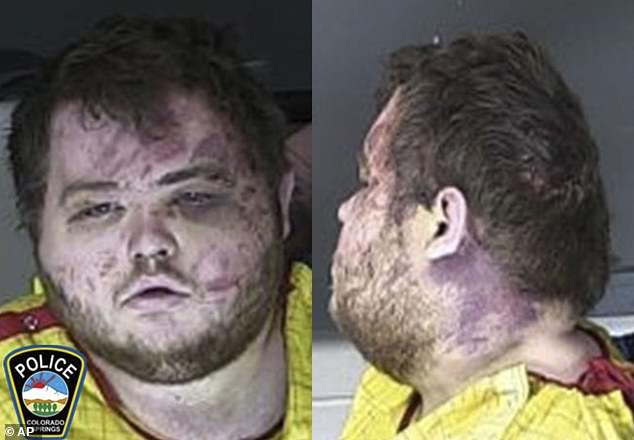 In his booking photo, Aldrich appeared battered, with face and neck bruises apparently sustained when beaten by the bar’s patrons 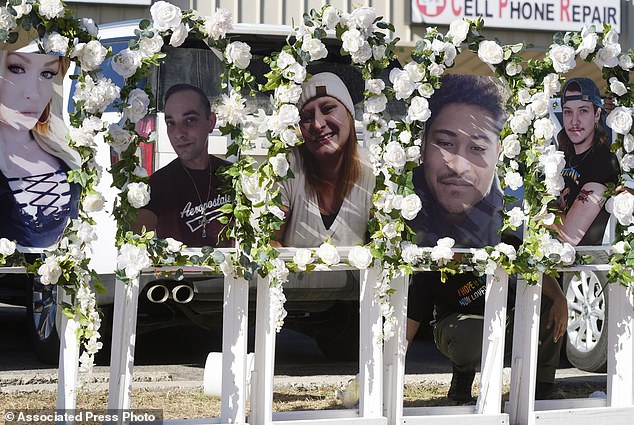 Photographs of victims of a mass shooting at a nearby gay nightclub are on display at a memorial on November 22, 2022, in Colorado Springs

The footage of the shooter was released to investigators by Matthew Haynes. The original video’s captured in Hayne’s surveillance footage contain audio.

Aldrich appeared in the footage minutes before he fired multiple rounds and had been tackled to the floor by bar patrons at 12:02am.

Footage of inside the club was also taken but hasn’t been released.

Aldrich was also arrested in June 2021 on allegations of making a bomb threat that led to the evacuation of about 10 homes. The details of the incident have been released after a judge ordered for them to be unsealed.

The 22-year-old threatened to harm family members and boasted of having bomb-making materials, ammunition and multiple weapons, according to law enforcement documents.

El Paso County District Attorney Michael Allen spoke hours after a judge unsealed the case, which indicated that the suspect threatened to kill relatives and to become the ‘next mass killer’ more than a year before the nightclub attack.

Aldrich’s statements in the case, which was dropped over the summer, have raised questions about why authorities did not seek to seize the suspect’s guns under Colorado’s ‘red flag’ law.

Judge Robin Chittum said the ‘profound’ public interest in the case outweighed Aldrich’s privacy rights. The judge added that scrutiny of judicial cases is ‘foundational to our system of government.’

‘The only way for that scrutiny to occur is for this to be unsealed,’ she said.

Aldrich was booked into jail on suspicion of felony menacing and kidnapping. The case was later dropped, and officials have refused to speak about it, citing a state law that calls for dismissed cases to be sealed. 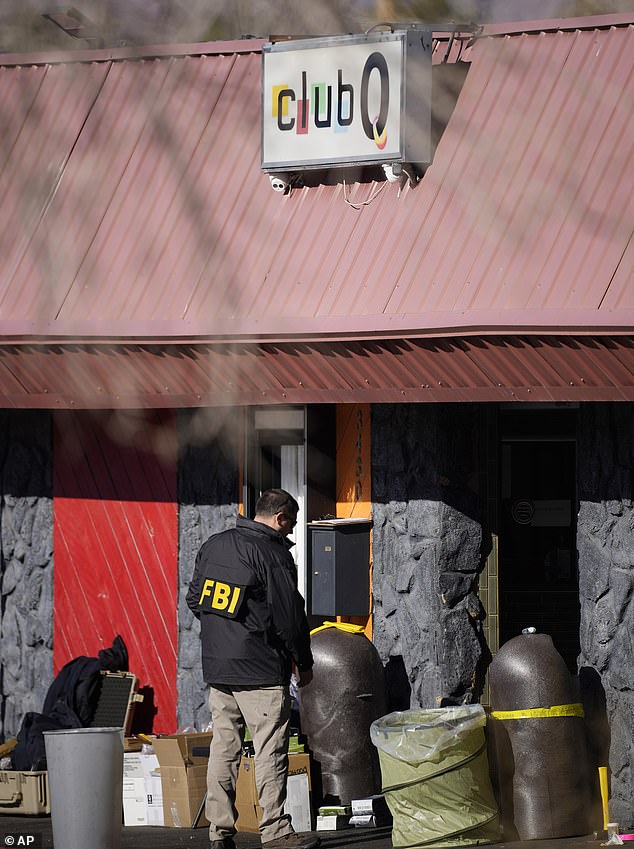 Pictured: Investigators at the scene of the Club Q nightclub, which was hosting a drag show when they said Aldrich walked in and opened fire. The club’s owners say Aldrich arrived with ‘tremendous firepower’ – an AR-15 rifle, six magazines of ammo and a handgun

The judge’s order to release the records comes after news organizations, including The Associated Press, sought to unseal the documents.

The papers detail how Aldrich told frightened grandparents about firearms and bomb-making material in the grandparents’ basement and vowed not to let them interfere with plans for Aldrich to be ‘the next mass killer’ and ‘go out in a blaze.’

Aldrich then pointed a Glock handgun at the grandparents as they pleaded for their lives and said, ‘You guys die today … I´m loaded and ready.’

The documents also detailed how the grandparents fled for their lives and called 911 and how fear of a bomb blast prompted the evacuation of nearby homes.

Aldrich was then in a standoff with SWAT teams and warned about having armor-piercing rounds and a determination to ‘go to the end.’

Eventually, a barefoot Aldrich came out with hands raised and surrendered. 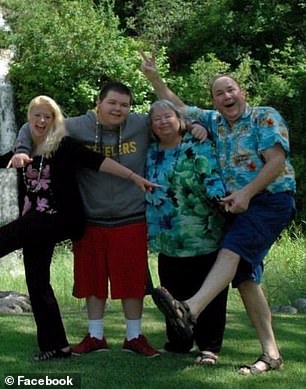 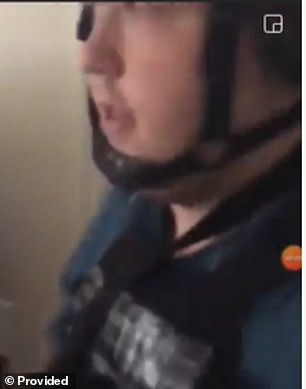 Anderson Lee Aldrich is shown, left, in a family photo and right, in a June 2021 livestream where he threatened to blow up a house where his mother was renting a room. He is now charged with five counts of murder in the Colorado gay nightclub shootings 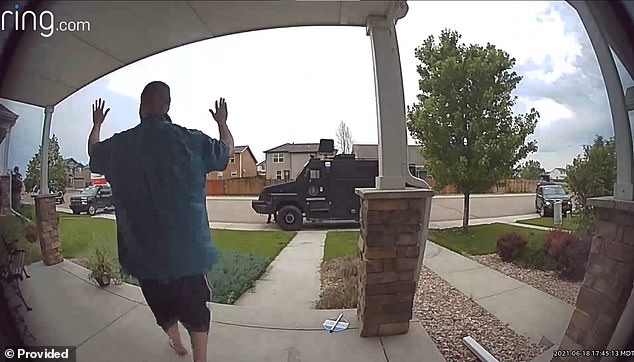 Before Anderson Lee Aldrich allegedly carried out the deadly Colorado gay nightclub shooting, the suspect had threatened to kill their grandparents in 2021 for standing in the way of an elaborate plan to become ‘the next mass killer’

Aldrich also was the subject of a tip received by the FBI a day before the bomb threat. Agents closed out the case just weeks later.

Under Colorado law, records are automatically sealed when a case is dropped and defendants are not prosecuted, as happened in Aldrich´s 2021 case.

Once sealed, officials cannot acknowledge that the records exist, and the process to unseal the documents initially happens behind closed doors with no docket to follow and an unnamed judge.

‘This is one of the strangest hearings I think I’ve ever had,’ Chittum said. ‘I’m having a hearing about a case that none of us is to recognize.’

Chittum ruled despite objections from the suspect’s attorney and mother.

Public defender Joseph Archambault argued that while the public has an interest in the case, Aldrich´s right to a fair trial was paramount.

‘This will make sure there is no presumption of innocence,’ Archambault said. 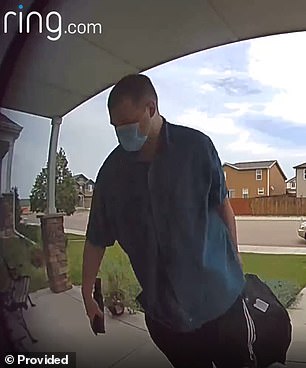 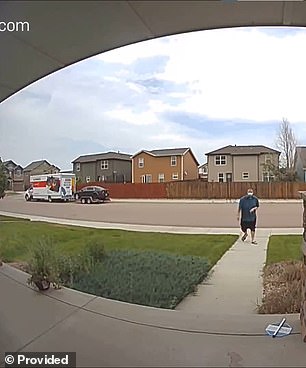 Aldrich is shown last year, showing up at the house where his mother was renting a room, after threatening to blow up his grandparents, with whom he’d been living nearby. His mom helped him into the house and had called the landlord to tell her not to tell anyone where he was 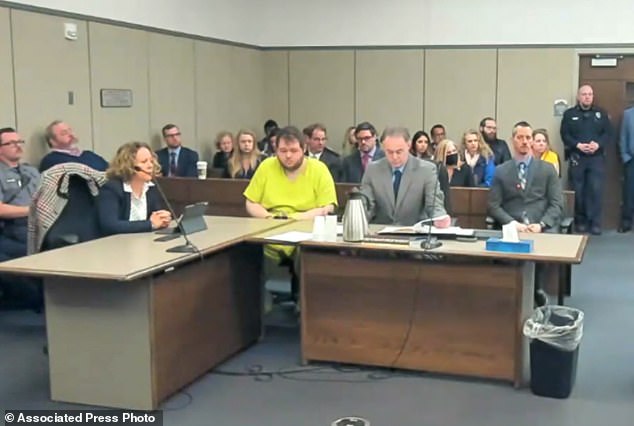 In this image taken from El Paso County District Court video, Anderson Lee Aldrich, 22, center, sits during a court appearance in Colorado Springs on Tuesday. They were formally charged Tuesday with 305 criminal counts, including hate crimes and murder, in the November 19 shooting at Club Q

During Thursday’s hearing, Aldrich sat at the defense table looking straight ahead or down at times and did not appear to show any reaction when their mother’s lawyer asked that the case remain sealed.

An attorney for Aldrich’s mother argued that unsealing the case would increase the likelihood that Laura Voepel would suffer harm harassment, intimidation or retaliation.

Aldrich was formally charged Tuesday with 305 criminal counts, including hate crimes and murder, in the November 19 shooting at Club Q.

Conviction on the murder charges would carry the harshest penalty – likely life in prison.