Researchers will lay thousands of mosquito traps in coastal and bayside areas to curb the spread of a flesh-eating disease that is appearing in parts of Victoria where it has not previously been recorded.

There has been an alarming rise in Buruli ulcer cases in recent years and scientists believe that mosquitoes and possums are spreading the bacteria, resulting in human infections.

Symptoms of the Buruli ulcer disease range from mildly inflamed mosquito bites to large open ulcers that can cause immobility and result in amputation in the most extreme cases. 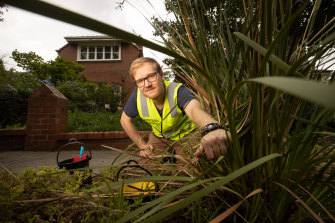 Researcher Peter Mee placing a mosquito trap that is being used in a research project to prevent the spread of the flesh-eating Buruli ulcer disease. Credit:Simon Schluter

Researchers are concerned 2021 is off to a bad start with 21 cases confirmed so far this year, compared to 12 for the same period last year.

The Doherty Institute is working on a research project with the Mornington Peninsula council and other state government departments, distributing mosquito traps to 250 households in Rye and Blairgowrie.

The researchers want to know whether a reduction in mosquito numbers will result in fewer cases.

Doherty Institute microbiology professor Tim Stinear said the study would be extended to the Frankston and Bayside council areas.

The traps, which will also be placed on public land, are the size of a pot plant and attract female mosquitoes but prevent their eggs from hatching.

Cases of the disease are most prevalent on the Bellarine and Mornington peninsulas but continuing infections have been recorded in Melbourne suburbs – particularly bayside areas. 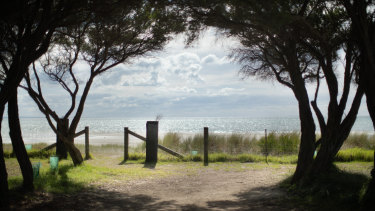 Rye on the Mornington Peninsula is a Buruli ulcer hot spot. Credit:Simon Schluter

Professor Stinear said the disease appeared to be spread by mosquitoes in about 80 per cent of cases but exposure to soil contaminated by possum faeces may also be contributing.

“This is the reality that we’re going to see more examples of what we call zoonotic infections where they jump from animals to humans or humans to animals,” he said.

“You need a puncture injury to introduce the bacteria under the skin. It’s not spread person to person, it’s an environment-to-person spread.”

There were just 24 cases of Buruli ulcer recorded in 2004 when it became mandatory for health professionals to report infection numbers to the Department of Health.

But Professor Stinear said Victoria’s extended lockdown in 2020 most likely contributed to the decrease in cases last year and the trajectory of the disease was going up.

He said the increasing population in Victoria’s coastal areas was likely to add to the rise in cases.

“As our population becomes more urbanised or we create these bigger centres and displace native animals we’ll see more of these sorts of events.”

Professor Stinear stressed the research project aimed to reduce mosquitoes rather than eliminating them entirely.

The researchers originally planned to use a spray but had to scrap that after a backlash from the community on the Mornington Peninsula.

The incubation period for the disease is typically about four months with infections most commonly acquired in the warmer parts of the year but presenting from May to October. 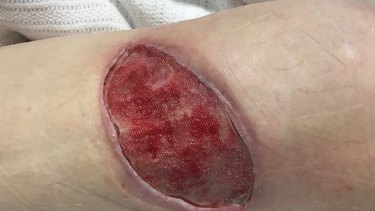 Donald Cottee’s ulcer grew to more than 10 centimetres after he was bitten by a mosquito almost a year ago.

A neighbour who is a registered nurse advised he see a doctor after a mosquito bite started weeping. He was put on a course of antibiotics but said they were not strong enough.

“I ended up having to go to hospital and go on a drip,” he said.

The ulcer ended up covering a patch on his thigh measuring about 10 centimetres. A case of polio as a child has caused added complications for Mr Cottee whose mobility was affected by the Buruli ulcer.

“I had to have surgery a couple of times to clean it all out and have skin grafts.”

Agriculture Victoria research scientist Peter Mee said the traps would be laid along fences outside residential properties for two weeks to monitor mosquito population sizes and then moved inside those properties for another month to reduce mosquito numbers.

“The program is based on using sustainable, non-toxic mosquito traps, which have been used around the world to reduce mosquito populations,” he said.

curb, March, New, of, research, to
You may also like: