Ardern said she had “no more in the tank” to continue leading the country and would step down no later than early February and not seek re-election.

Deputy Prime Minister Grant Robertson and deputy party leader Kelvin Davis have already ruled themselves out, as has newcomer to cabinet, Kieran McAnulty, seen by many to be a rising star.

So who could replace Ardern? 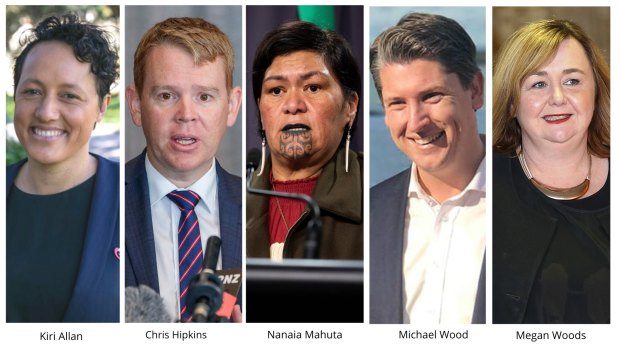 Who are the contenders to be New Zealand’s next prime minister. Here are some of the Labour leader contenders.Credit:

Allan, whose portfolio also includes disaster management, was diagnosed with stage 3 cervical cancer in 2021 on the same day a powerful earthquake struck off the country’s coast, triggering tsunami warnings. She took a leave of absence to seek treatment before returning.

Before entering parliament in 2017, Allan worked as a manager in the agriculture industry, and was heavily involved in new kiwi fruit developments. She has also practised commercial and public law in several areas of the country.

First elected to parliament for the Labour Party in 2008, Chris Hipkins became a household name fronting the government’s response to the pandemic after being appointed minister for COVID-19 in November 2020.

Leading a response that was hailed around the world for leaving the country virus free for the first half of 2021, criticism grew over harsh lockdowns as officials struggled to control a Delta outbreak that began in August 2021. The 44-year-old later said quarantine measures should have been scaled back earlier.

Having built a reputation for competence, Hipkins became Minister for Police in mid-2022 amid a crime wave. He is also minister for education, public service and serves as leader of the house.

Hipkins held several roles in politics before joining parliament. He was senior adviser to two education ministers and served in the office of former Prime Minister Helen Clark.

He would not rule out running for the leadership when asked on Thursday.

“No, I’m not [ruling out running] but I’m also saying that, you know, at the moment, I think people just need a little bit of time,” he said.

“In due course, I think I need to have a conversation with my colleagues. As do my colleagues need time to digest the news.”

The 52-year-old has used her role to advocate a diplomatic middle ground for Pacific nations caught between the United States and China, saying late last year that the region is not “altogether comfortable with either superpower”.

With a traditional facial tattoo that celebrates her Maori heritage, Mahuta has long championed Maori causes as a tribal member of Waikato-Tainui, Ngāti Maniapoto and Ngāti Manu. She is the daughter of Sir Robert Mahuta, the adopted brother of the late Maori queen and respected Maori elder.

Mahuta has also held the local government portfolio and pushed through controversial legislation to change the ownership structure of the country’s water infrastructure.

Wood was elevated to minister of transport and workplace safety in 2020 after Jacinda Ardern’s historic election, the best result for the Labour Party in half a century. He added immigration to his portfolio in a mid-2022 cabinet reshuffle.

Before becoming a member of parliament, he served on Auckland’s city council. He also worked at the finance sector union.

Housing Minister Megan Woods is a senior Labour MP with a long history in politics who will again run the party’s election campaign in 2023.

Housing has been a major policy area for Labour and, after the government’s failed attempts to build homes after coming to power in 2017, Woods was tasked with getting this work on course.

She was also appointed minister in charge of managed isolation facilities during the pandemic, as failures in the system emerged.

Woods was elected to the Christchurch electorate of Wigram in 2011, joining the Labour Party in 2007 after years in the Alliance and Progressive parties.

“We’ve got a caucus process to go through and that we’ve been asked not to rule anything out or rule anything in,” Woods said on Thursday.