Follow
Home » World News » NFL picks against the spread: Patrick Mahomes is in a rare spot as underdog vs. Bills

NFL picks against the spread: Patrick Mahomes is in a rare spot as underdog vs. Bills

Patrick Mahomes is going to have a long and glorious career for the Kansas City Chiefs. Let’s be conservative and put it at 12 seasons of brilliance in KC.

How many times in those 12 years will the Chiefs be a home underdog? Five? Three?

It will be at least once. The Chiefs are home underdogs for the first time with Mahomes as their starting quarterback. They’re a 3-point underdog at BetMGM in a titanic matchup against the Buffalo Bills.

Making Buffalo a favorite is justifiable. The Bills are very good. It’s just shocking to see Mahomes getting points at home.

The line has moved too. It went from Bills -2 to -3 earlier this week.

Take a long look because it won’t happen often. Mahomes had never been an underdog in 41 previous home games, the longest streak of being a home favorite to start a career according to ESPN Stats and Info (via BetMGM data analyst John Ewing).

It’s still hard to fade the Bills. Their best level is far better than anyone else in the NFL. It might be the best we’ve seen in a few years. Buffalo has already blasted the Los Angeles Rams, Tennessee Titans and Pittsburgh Steelers. In the Titans and Steelers games, it seemed like they could have scored 70 if they really wanted to run it up. Every time you bet against the Bills this season, it’ll be a nervous ride.

However, as history has shown, if you blindly take the Chiefs and Mahomes anytime they’re getting points you’ve done very well. Let’s go with the Chiefs +3. What a game it should be. 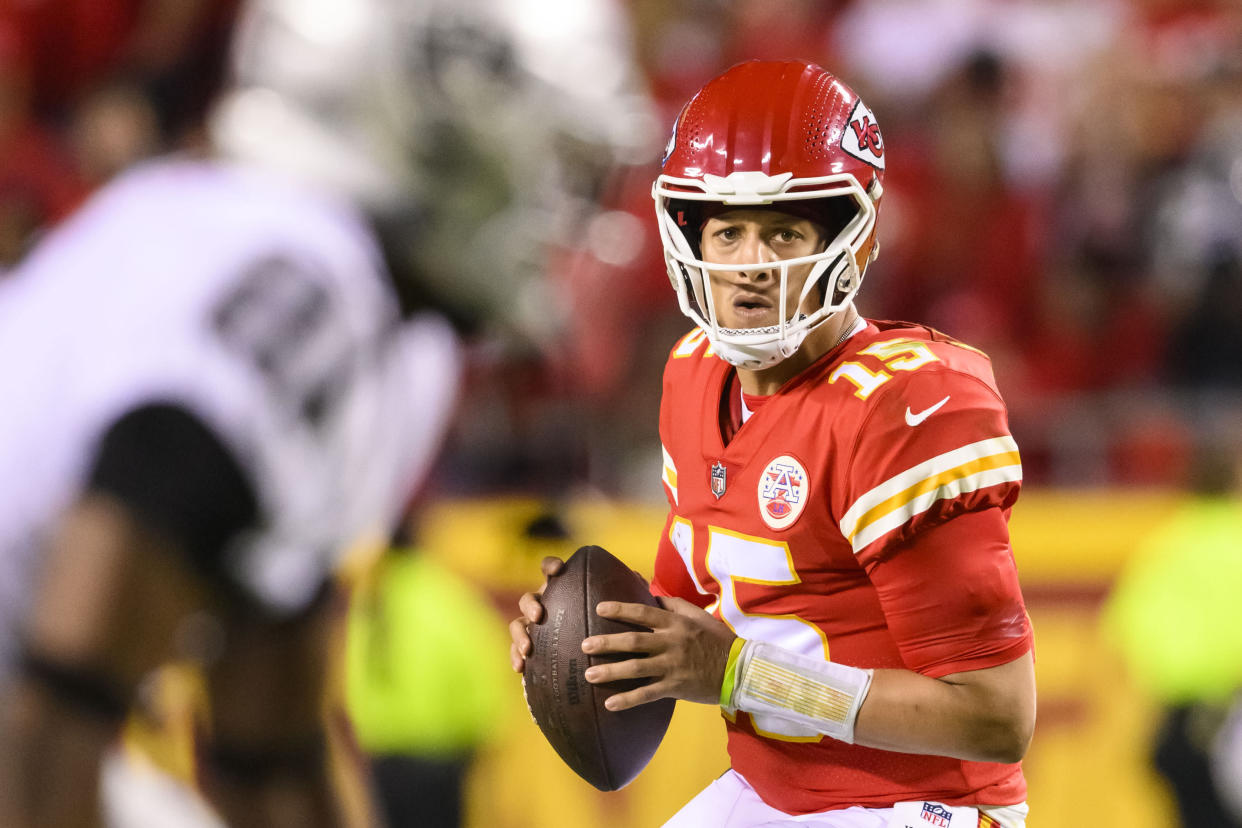 Here are the against the spread picks for Week 6 of the NFL season, with point spreads from BetMGM:

Well, this one won’t be pretty. But as I said in today’s Daily Sweat, the Bears just seem like the better team. Not a good team, just better than Washington.

It says plenty about how low the Steelers are that they’re 8.5-point underdogs at home. They just got wrecked by the Bills, though they won’t be the last team that happens to. The Buccaneers might not be great this season. Like last week I’ll take the Steelers and all those points, realizing that there could be some regret very early in the game.

I wish I felt better about the Bengals this season, because this seems like a good spot for them. The Saints offense wasn’t very good until last week, and last week the defense was a mess. If the Bengals lose here, there should be real concern over their season.

The Jaguars were bad last week in a home loss to the Texans. Were they looking ahead to this game? Maybe. All I know is the last time these two teams played, the Jaguars weren’t just the better team, they were shockingly dominant. They shut out the Colts 24-0 in that Week 2 game and it wasn’t even that close. What has changed in four weeks? And the Jaguars are getting points? Sure.

The Patriots are suddenly getting a decent amount of respect on this line. Or is it that the Browns aren’t getting any respect? New England hasn’t suddenly fixed everything just because they blasted the Lions. But the Browns aren’t very good either. I’ll go with the Browns but not with much conviction.

The Packers might be the team that wins games but doesn’t cover many spreads. And hey, after losing to the Giants last week, maybe they won’t win that many games either. I’m not sold on the Jets at all, but the Packers can’t put teams away. It cost them last week.

This line is disrespectful to the Giants. Their 4-1 start does seem fraudulent, but they did just beat the Packers. It’s not like the Ravens haven’t had their issues. Whatever new Giants coach Brian Daboll is doing, his players are buying in. They will keep it close, and maybe get the win straight up.

I hate that the Dolphins season got sidetracked so quickly. Skylar Thompson, a seventh-round rookie, looked better than expected last week. And the Dolphins still lost by a lot. He’ll likely get the start this week after Tua Tagovailoa was ruled out. If the Vikings can’t get a decisive win here, it will say a lot about them.

The Falcons are the last team in the NFL that’s undefeated against the spread. I’m not sure how they’re doing it. But here come the 49ers in a tough spot having two straight games in the Eastern time zone, this one being an early start.

Sometimes teams that have quit playing for their coach get a dead-cat bounce in the first week after the coach is fired. Other teams play better than expected with a backup quarterback because they rally around him. The Panthers have both factors in their favor this week. And, is P.J. Walker really much of a downgrade over Baker Mayfield at this point? On top of all that, I’m worried the Rams have some personnel issues they’re going to have a hard time overcoming.

I’m as confused by the Geno Smith renaissance as everyone else. But it’s hard to deny it. Seattle should be able to score points.

This was a tough call. I will hope the Cowboys defense can keep this team in the game. It’ll be a lot harder against an Eagles offensive line that might be the best in the NFL.

You have to be brave to take the Broncos. Denver looks like a mess and quarterback Russell Wilson isn’t healthy. Even if he was healthy, I’m not sure we can trust that offense yet. It’s a fairly big number but I don’t trust the Broncos to keep it close.