A developer known as ‘Evil Ape’ has absconded with $2.7 million in funds raised by the sale of non-fungible tokens (NFTs) tied to primate characters in a proposed fighting game.

‘Investors’ who shelled out thousands of dollars apiece for the digital tokens discovered on Friday that the project’s creator had disappeared with the pilfered funds, according to Vice.

The scam, though related to the complex realm of NFTs and the cryptocurrency Ethereum, seems similar to selling shares in a fictional business venture and then skipping town with the money.

The project in question is known as ‘Evolved Apes,’ which the NFT marketplace OpenSea as ‘a collection of 10,000 unique NFTs trapped inside a lawless land.’ 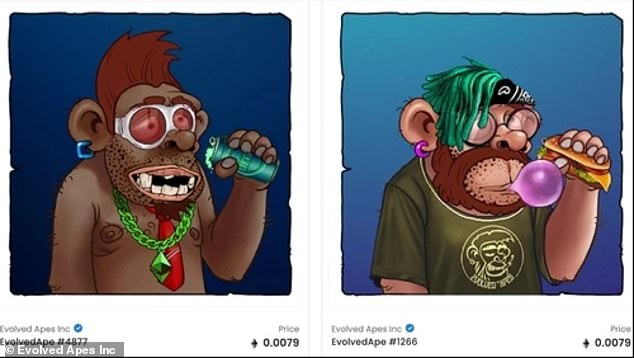 Investors shelled out thousands for unique ‘Evolved Apes’ characters like the ones above, but the developer behind the project appears to have absconded with the money 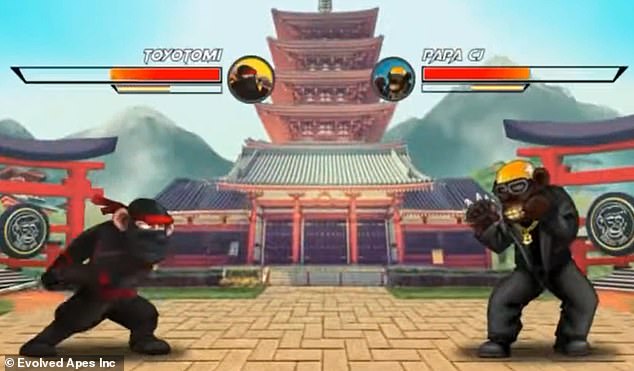 The developers had promised that participants who bought the ape tokens would be able to use them in a death-match style fighting game, in which the winners would walk away with valuable Ethereum.

Launched in late September, the Evolved Apes project quickly raked in millions through the sale of the NFTs.

But within a week, the anonymous developer known as Evil Ape vanished with the project’s Ethereum funds worth $2.7 million, deactivating the project’s Twitter account and website.

The funds had been intended for use in developing the death-match game and paying out awards to participants.

A member of the Evolved Apes community known as Mike_Cryptobull told Vice that he conducted a fact-finding mission after red flags were raised about the integrity of the project. 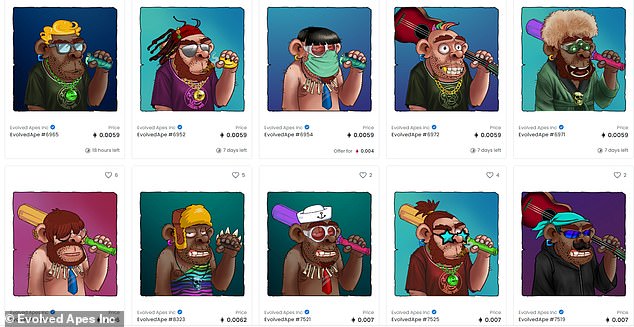 Although the developer has fled and seems to have abandoned the project, the Evolved Ape NFTs are still trading on the open market

‘And through piecing the bits together I could find out and the parts that all aligned, I put together my opinion in the pdf for the community,’ said Mr Cryptobull.

‘What has happened is that Evil Ape has washed his hands of the project taking away the wallet with all the ETH from minting that was to be used for everything, from paying the artist, paying out cash giveaways, paying for marketing, paying for rarity tools, developing the game and everything else in between,’ he wrote in the report shared with his fellow investors.

Organizing with his fellow apes, Mr Cryptobull has created the organization Fight Back Apes to take control of the project and attempt to hold Evil Ape accountable.

NFTs use the blockchain technology behind cryptocurrency to record the ownership of digital items such as images, videos, collectibles and even land in virtual worlds.

They first exploded in popularity in February and March. A single NFT artwork by the digital artist Beeple fetched $69.3 million at Christie’s, in the first sale by a major auction house of artwork with no physical form. 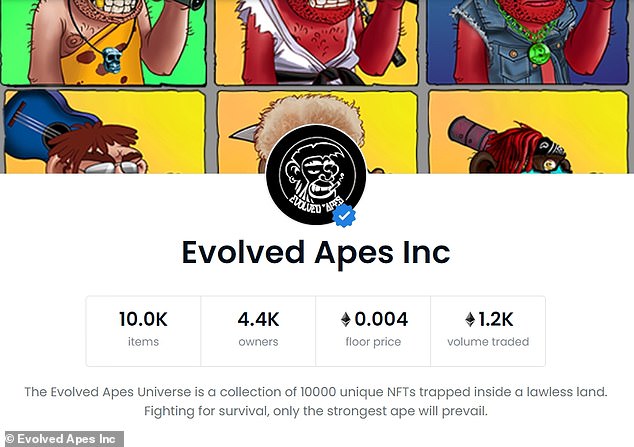 The project in question is known as ‘Evolved Apes,’ which the NFT marketplace OpenSea as ‘a collection of 10,000 unique NFTs trapped inside a lawless land’

Total NFT sales surged to $10.7 billion in the third quarter, according to a report on Tuesday from crypto tracker and research provider CoinDesk.

Bitcoin, the world’s largest cyrptocurrency in terms of market value, rose on Tuesday, passing the $50,000 mark for the first time in four weeks and adding to gains this month on mounting institutional interest.

In early September, Bitcoin fell below $50,000 during a broad selloff in shares of cryptocurrency and blockchain-related firms. It fell further in September, hitting a low of $40,596 on September 21.

What is a non-fungible token (NFT)?

What is a NFT?

A Non-Fungible Token (NFT) is a unique digital token encrypted with an artist’s signature and which verifies its ownership and authenticity and is permanently attached to the piece.

Most NFTs include some kind digital artwork, such as photos, videos, GIFs, and music. Theoretically, anything digital could be turned into a NFT.

Where do you buy them?

At the moment, NFTs are most commonly sold in so-called ‘drops’, timed online sales by blockchain-backed marketplaces like Nifty Gateway, Opensea and Rarible.

Why would I want to own one?

There’s an array of reasons why someone may want to buy a NFT. For some, the reason may be emotional value, because NFTs are seen as collectors items. For others, they are seen as an investment opportunity similar to cryptocurrencies, because the value could increase.

When were NFTs created?

Writer and podcaster Andrew Steinwold traced the origins of NFTs back to 2012, with the creation of the Colored Coins cryptocurrency. But NFTs didn’t move into the mainstream until five years later, when the blockchain game CryptoKitties began selling virtual cats in 2017.

as, Developer, e, known, NFT
You may also like: