NHS policy documents compare patients who want to stay on single sex wards to ‘racists’ and ‘offenders’ who need ‘trans-education to improve their attitudes’, whistleblower claims

NHS trusts in England are ‘gaslighting’ patients over the inclusion of transgender people on single-sex wards with official documents comparing those who question the official policies to ‘racists’, according to a whistleblower nurse.

Dr Sinead Helyar, who is a doctor and clinical research nurse at King’s College Hospital, claims that official NHS documents label patients who ask to be put in a single-sex ward as ‘transphobes’, ‘offenders’ and ‘perpetrators’.

She also highlighted her ‘concerns’ about the treatment of women patients on single-sex female wards, and said that NHS policies ‘prioritised male transgender patients in the very spaces set out for women’.

Speaking to a panel organised by the parliamentary campaign group Children and Women First at the Conservative Party conference on Tuesday morning, Dr Helyar said: ‘I speak in a personal capacity only as a nurse to highlight concerns where NHS policy has been formulated and enacted to the detriment of women. Dr Sinead Helyar highlighted her ‘concerns’ about the treatment of women patients on single-sex female wards, and claimed that NHS policies ‘prioritised male transgender patients’. 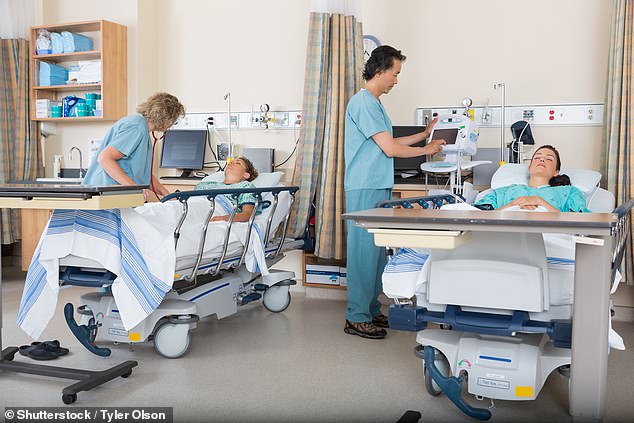 Dr Sinead Helyar, a doctor and clinical research nurse at King’s College Hospital, has claimed that official NHS documents label patients who ask to be put in a single-sex ward as ‘transphobes’, ‘offenders’ and ‘racist’s’ (Stock image)

‘As part of it’s single-sex ward policy the NHS allows full bodied male adults to be placed next to women on female wards.

‘Although policy states there are circumstances where a trans patient can be excluded, this generates a clear conflict of interest between patients and denies women the single-sex wards, which the NHS itself recognise they need.

‘This is the NHS gaslighting women patients. In some trusts being a known male sex-offender is not an automatic bar to women’s wards, both Devon and Oxford allow them on female wards subject to risk assessment’.

Under the Equality Act of 2010, NHS documents tell women patients of their right to single sex wards for safety, privacy and dignity, the right to express preferences in care and to be treated fairly and with respect.

However Dr Helyar mentioned the shocking sexual assault of two women by a male-born patient who identified as a woman, in a mental health trust after staff members concerns were ignored, according to The Telegraph.

She said: ‘In one mental health trust a male, who identified as a woman, was placed on a female ward with observation, this patient complained the observation was discriminatory and it was removed  – the patient went on to sexually assault two women patients.

‘The same patient was placed on a female ward on a subsequent admission, and each time assaulted women. Staff concerns were ignored.’

According to Dr Helyar, who said that the NHS is heavily influenced by LGBT charity Stonewall, official documents prevent staff from speaking out if they notice any safeguarding aspects because they could be ‘charged with a criminal offence’.

She added: ‘Policies prevent staff from speaking out even when there are clear safeguarding concerns and questioning any aspects will be perceived as anti-trans, with consequences including a disciplinary – and in some cases being charged with a criminal offence.

‘One staff member in a trust had a formal complaint made against her.’

This news comes as Health Secretary Sajid Javid ordered a review into guidance that could see male-born sex offenders who identify as women allowed on female-only NHS wards.

He said on Twitter: ‘It’s not wrong to look at whether guidance is right, or how it’s being applied, to reassure everyone. I’ve asked the Department of Health and Social Care for fresh advice.’

Hospital trusts in Devon, Oxford and Nottinghamshire tell staff criminal history should be part of a risk assessment when placing trans women on female-only wards.

But they do not say a criminal history should prevent the patients from being admitted and NHS trusts advise that patients should be admitted based on the gender with which they identify.

Some trusts have called those who are uncomfortable with the idea transphobic, likened them to racists in official guidelines and asked staff to report them to the police for hate crimes.’