When Nicki Minaj was presented with the Video Vanguard Award at Sunday’s MTV Video Music Awards ceremony, her career-spanning, greatest-hits medley was a characteristically colorful and raunchy affair — one that had her famous fans (or “Barbz”), like Taylor Swift and the ladies of BLACKPINK, bopping in the Prudential Center audience to “All Things Go,” “Roman’s Revenge,” “Monster,” “Beez in the Trap,” “Chun-Li,” “Moment 4 Life,” “Super Bass,” “Anaconda,” and the brand-new single “Super Freaky Girl.”

But when Minaj approached the podium flanked by five lucky Barbz, she got serious — delivering an acceptance speech that proved just why she’s amassed such a devoted fanbase over the past decade. 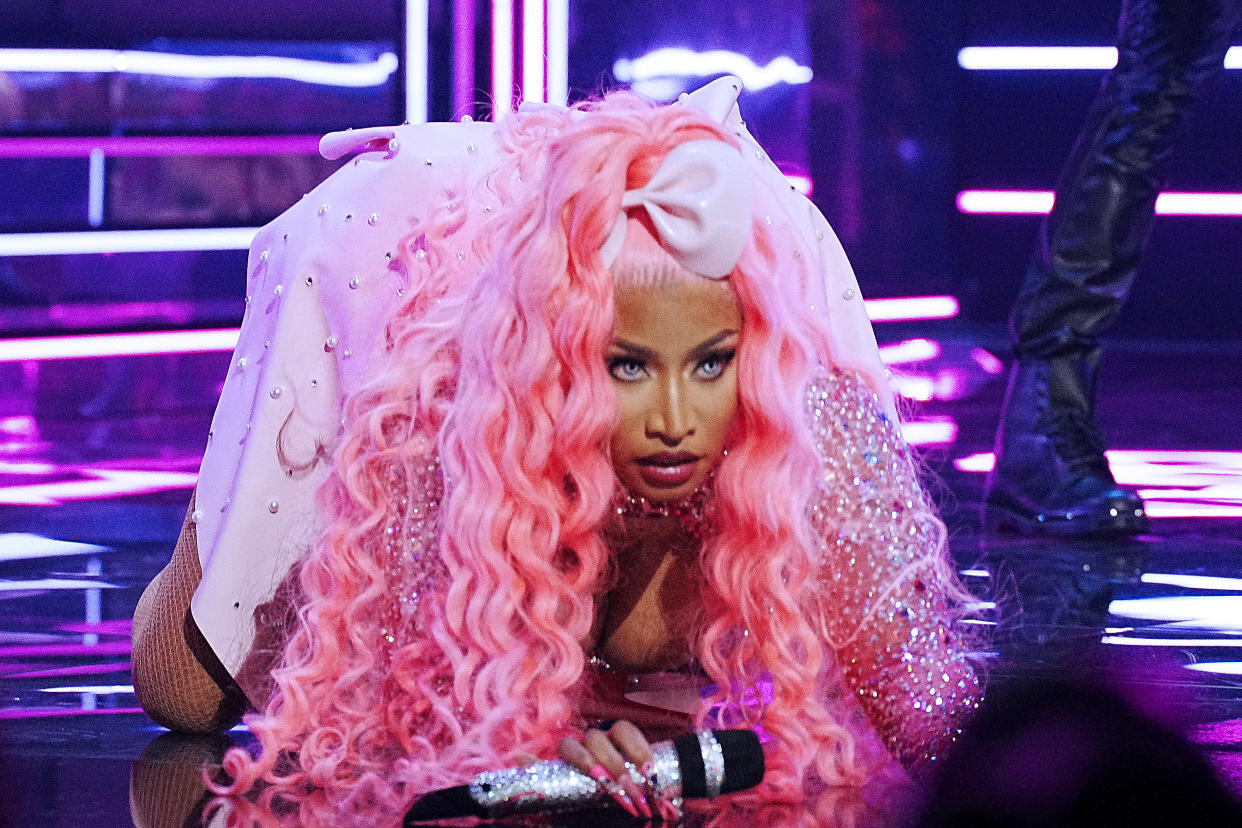 “I never, ever in my life have written a speech, and today I jotted something down on my phone, and I give my phone to Joe, and he is not up here with it — which is sad, because now I don’t remember stuff,” Minaj began awkwardly. Concerned/amused viewers immediately blew up Twitter with “Where’s Joe?” and “You had one job!” memes and predictions that the rapper’s presumed assistant was about to be fired. But once the errant Joe saved the day and finally sprinted to the stage with Minaj’s missing phone, it turned out to be worth the wait.

“I wrote this down, I don’t know why, but this was in my spirit to say: I wish that Whitney Houston and Michael Jackson were here,” Minaj began. (The Video Vanguard Award is sometimes known as the Michael Jackson Video Vanguard Award.) “I wish that people understood what they meant and what they were going through. … I wish Pop Smoke and Juice Wrld and Nipsey Hussle were here. R.I.P. Daddy, my cousin Richard, and my business manager Angela, who I never got to say ‘rest in peace’ to publicly.”

Nipsey Hussle was shot to death in 2019, the same year that Juice Wrld died of a drug overdose at age 21. Pop Smoke was also gunned down in 2020; he was 20 years old. As for two especially personal recent losses referenced in Minaj’s speech, in 2021 her father, Robert Maraj, was killed as a pedestrian in a hit-and-run accident, and her former business manager, Angela Kukawski, died in a suspected homicide.

Minaj also remarked in her VMAs speech, “I wish that people took mental health seriously — even for the people that you think have the perfect lives.” Minaj has been outspoken about her own mental health struggles in the past. Way back in 2011, she confessed to Cosmo that she was once so depressed that she considered suicide, and last year during a Twitter Q&A with fans, she explained that taking a musical hiatus after her 2018 album Queen had been “soooo needed” for her mental wellbeing. Obviously the career break didn’t slow her down, because this year she became only the second female rapper to ever receive MTV’s Video Vanguard lifetime-achievement honor.

On a lighter note, on Sunday Minaj also shouted out her influences (Lil Wayne, Foxy Brown, Lauryn Hill, Jay-Z); “all of Jamaica”; and, of course, her Barbz. She also thanked her many collaborators that gave her “huge opportunities that I will never forget,” like Kanye West, Beyoncé, Madonna, Eminem, Britney Spears, Rihanna, Drake… and, surprisingly, her former American Idol Season 12 nemesis Mariah Carey, with whom she dueted on “Up Out My Face” very early in her career. Later, when she picked up the Best Hip-Hop Award, she graciously namechecked many other artists that she didn’t have time to mention earlier, including Fergie (who was a surprise VMAs performer Sunday with Jack Harlow), Taylor Swift, Elton John, Christina Aguilera, Ciara, Alicia Keys, Mary J. Blige, Keyshia Cole, Gucci Mane, Puff Daddy, Salt-N-Pepa, Kid ‘n Play, Nas, 50 Cent, LL Cool J, G-Unit, and Lil Baby.