More than nine out of 10 over-65s in England now have signs of Covid immunity for the first time, an official survey has revealed.

Antibody testing on random members of the population shows that protection against coronavirus is now more widespread than ever as the UK’s huge vaccine rollout today extended to people in their 30s.

An Office for National Statistics report shows that 92.3 per cent of people aged 65 or older would now test positive for antibodies, which are virus-fighting proteins developed after a Covid illness or a vaccine.

These figures from April 19 mark the first time the figure has risen above 90 per cent as the country has spent the past month focusing on getting second jabs to older people 12 weeks after their first doses were given out.

Vaccines now look so effective that SAGE has suggested the next ‘wave’ of infections, expected to start from next week when most remaining lockdown rules are lifted, could be ‘very small’ if people keep social distancing.

The report suggests 73 per cent of adults in England have had at least one vaccine dose while 27 per cent have been fully vaccinated. Government figures show 35.7million first doses have been given out and 18.4m boosters.

‘Across all four countries of the UK, there is a clear pattern between vaccination and testing positive for Covid-19 antibodies,’ the ONS said. ‘But the detection of antibodies alone is not a precise measure of the immunity protection given by vaccination.’ 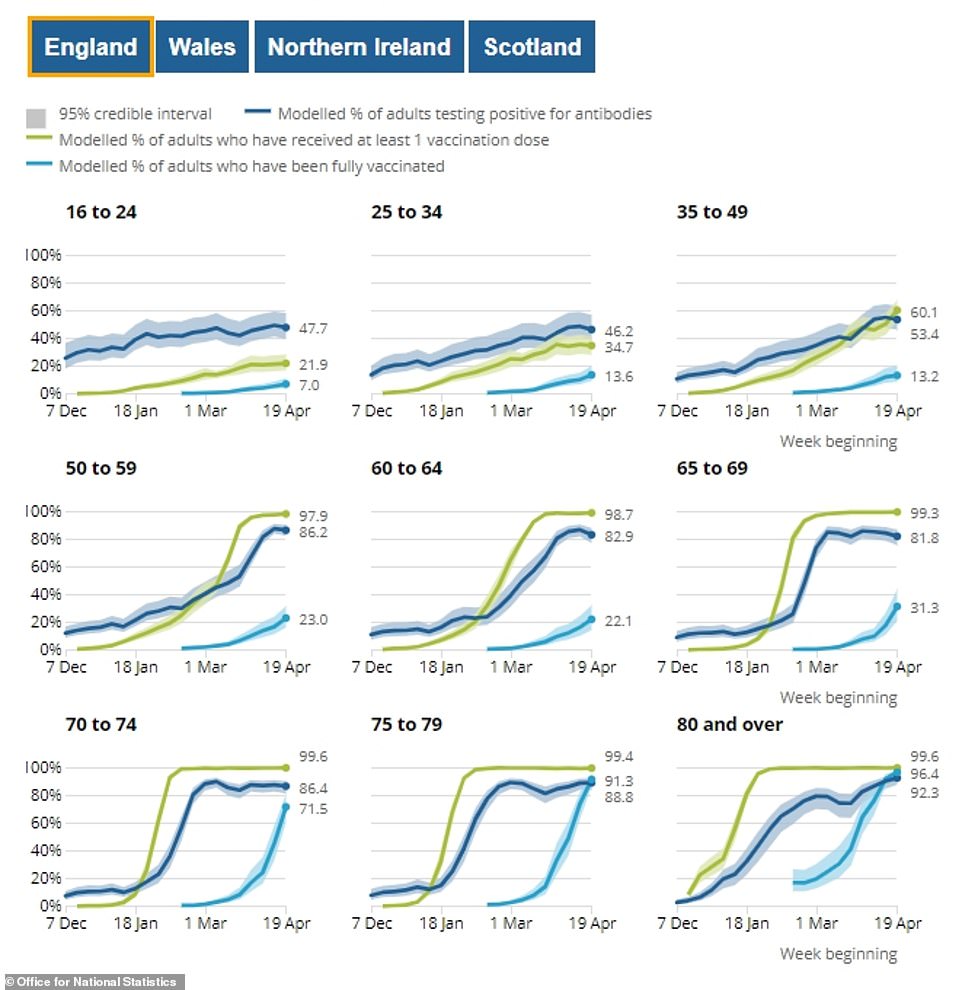 ONS figures show that the proportion of people testing positive for coronavirus antibodies increases with age, with an average of 92.3 per cent of over-65s showing signs of immunity. [Dark blue line shows antibody positive rate, green line shows estimate of how many people have had their first vaccine dose and light blue is second vaccine doses] 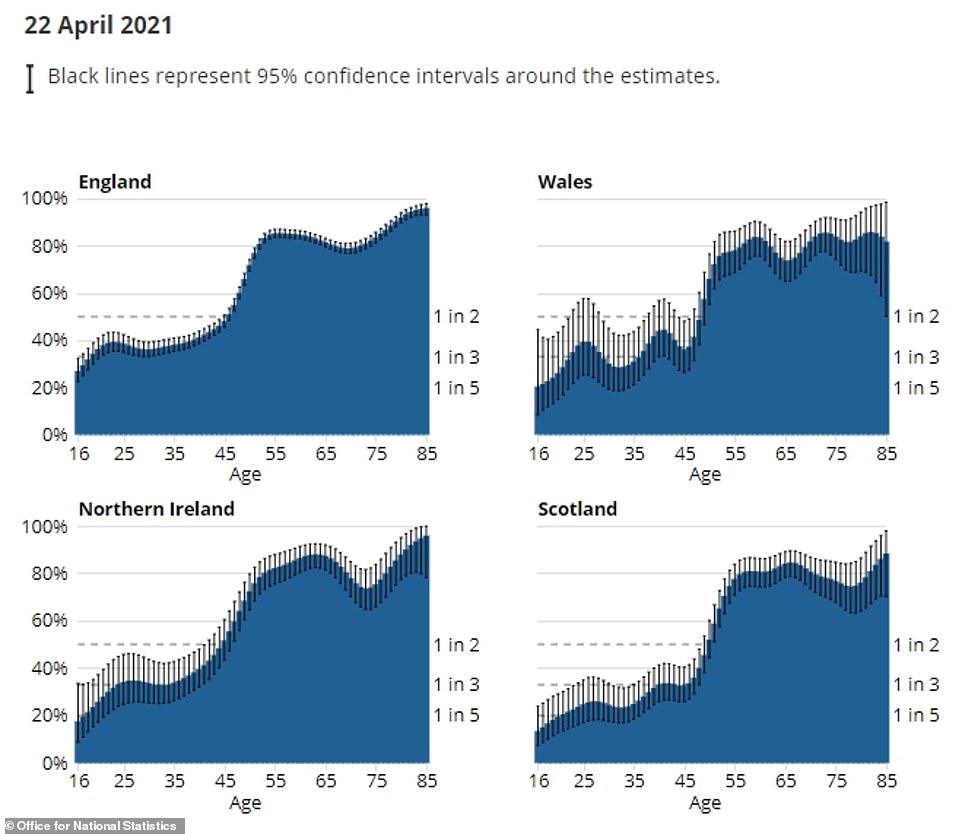 Charts show how the high levels of antibodies seen in the UK’s oldest populations are being caught up by younger people as the vaccine rollout extends to lower age groups. 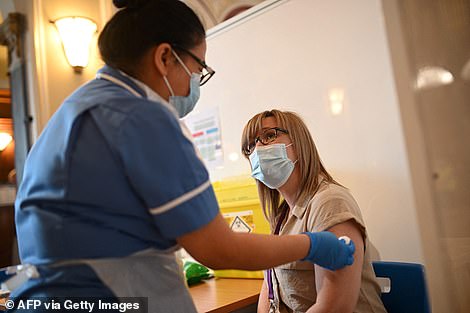 Government figures show 35.7million first doses have been given out and 18.4m boosters. Pictured: A woman gets vaccinated at City Hall in Hull, East Yorkshire

The ONS report showed that positive antibody tests were more common in older age groups, in line with the order people are getting vaccinated in.

The coronavirus vaccine programme in England opened up to people under the age of 40 for the first time today.

NHS England said around a million adults aged 38 and 39 will be invited to come forward for their jab.

They will be offered either the Pfizer or Moderna vaccine on the back of guidance from medical regulators last week.

The Joint Committee on Vaccination and Immunisation (JCVI) said under-40s should be given an alternative to the AstraZeneca jab due to its link to rare blood clots.

People who qualify for a jab will be invited via a text from ‘NHSvaccine’, which includes a web link to the health service’s online booking service.

Those who can’t access the internet can call 119 instead to get an appointment at one of 1,600 sites administering the vaccines across England.

So far more than a quarter of the entire UK population – 18.1million – has been fully vaccinated against Covid and more than half – 35m – have received the first dose.

NHS national medical director Professor Stephen Powis said the success of the rollout was owed to ‘careful planning and precision of NHS staff’.

Animated charts show how the high levels of antibodies seen in the UK’s oldest populations are being caught up by younger people as the vaccine rollout extends to lower age groups.

Most people are developing antibodies after being vaccinated but some will have them from having been infected with Covid in the past.

The proteins are developed to stick to the coronavirus if it gets into the body, preventing it from latching onto cells and causing infection.

Some people who test positive for antibodies will still get ill – although the jab vastly reduces the risk of them ending up in hospital or dying – and some people who have been vaccinated won’t develop antibodies because they don’t work for 100 per cent of people.

A regional breakdown of the ONS blood testing showed that signs of immunity are spread evenly across most of England, with all seeing positivity rates of between 64 and 70 per cent.

The vaccination rate is lowest in London at 59.7 per cent, compared to 71.5 per cent in the East of England, but there is still a high antibody positive rate, showing a lot of people have developed immunity from past infection.

A Government-commissioned study by Imperial College London today revealed that the vaccine rollout made infection rates among people over 55 plummet during April and experts said it has broken the link to hospital admissions and deaths.

The UK’s largest national survey tracking the coronavirus outbreak found that infections plummeted by 50 per cent between March and April and infections fell most sharply – by two thirds – in the 55 to 64 age group as millions of them received their first dose of a vaccine.

The study found that overall one in 1,000 people in England tested positive in the final two weeks of April. This was down from one in 500 at the end of March and one in 64 at the beginning of January.

The REACT survey sent out swabs to a representative sample of households across England to track the pandemic, testing around 127,000 people in total regardless of their symptoms.

Out of just 115 positive results recorded throughout April, it found that infections were lowest among older age groups, almost all of whom have now been vaccinated with at least one dose.

One of the study’s authors, Imperial College epidemiologist Professor Paul Elliott, said: ‘There has been a halving of the prevalence in the period from the end of March to mid-April and the beginning of May…

‘There is a fall in all age groups except the 25 to 34-year-olds, with a particularly significant fall in 55 to 64-year-olds and, of course, this coincides with the rollout of the vaccine programme to that age group.’

He added: ‘We saw falls earlier in the older people who had been vaccinated and there was an uncoupling of infections from hospital admissions and deaths. We are seeing the effects of vaccines in our data.’

Co-author Professor Steven Riley said: ‘The last time that we estimated prevalence to be this is actually just at the end of August, so we’re back into levels of last summer.’

He added that vaccination has ‘broken the link’ between infections and a rise in deaths and hospital admissions but cautioned: ‘If there is going to be a big increase in transmission the models suggest it’s going to be around now…

‘There is potential for prevalence to go up in the short-term but there remains a very, very weak link between infections and hospitalisations and deaths.’ 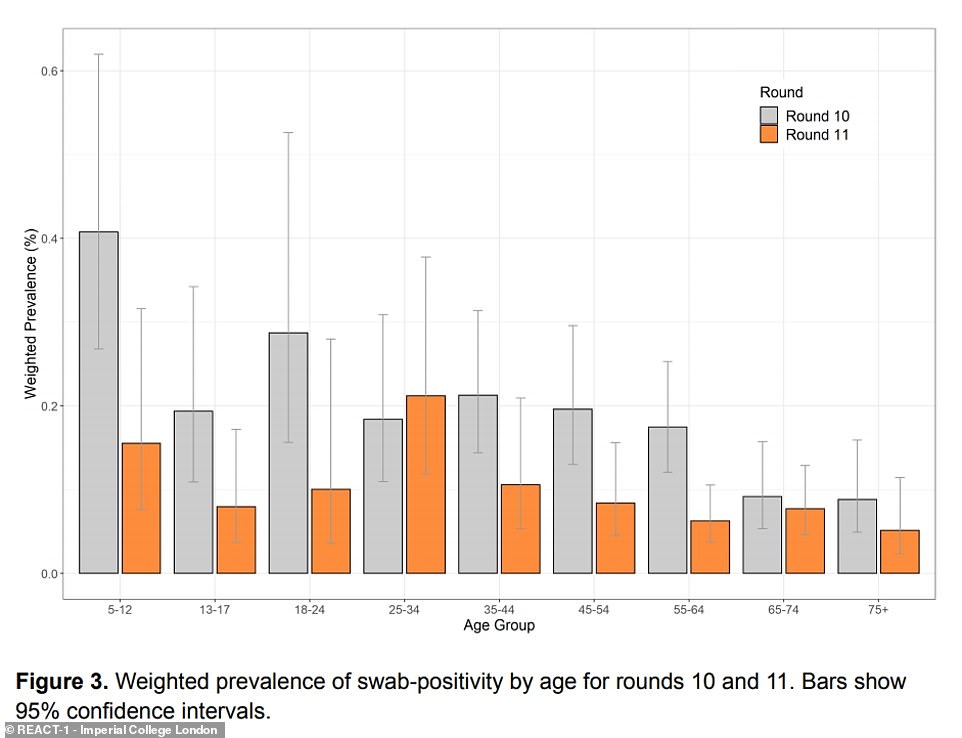 The most recent results from the REACT random swab-testing study showed there had been a significant fall in the infection rate of 55 to 64-year-olds between the end of March and the start of May. The researchers said this ‘coincides with the rollout of the vaccine programme to that age group’ 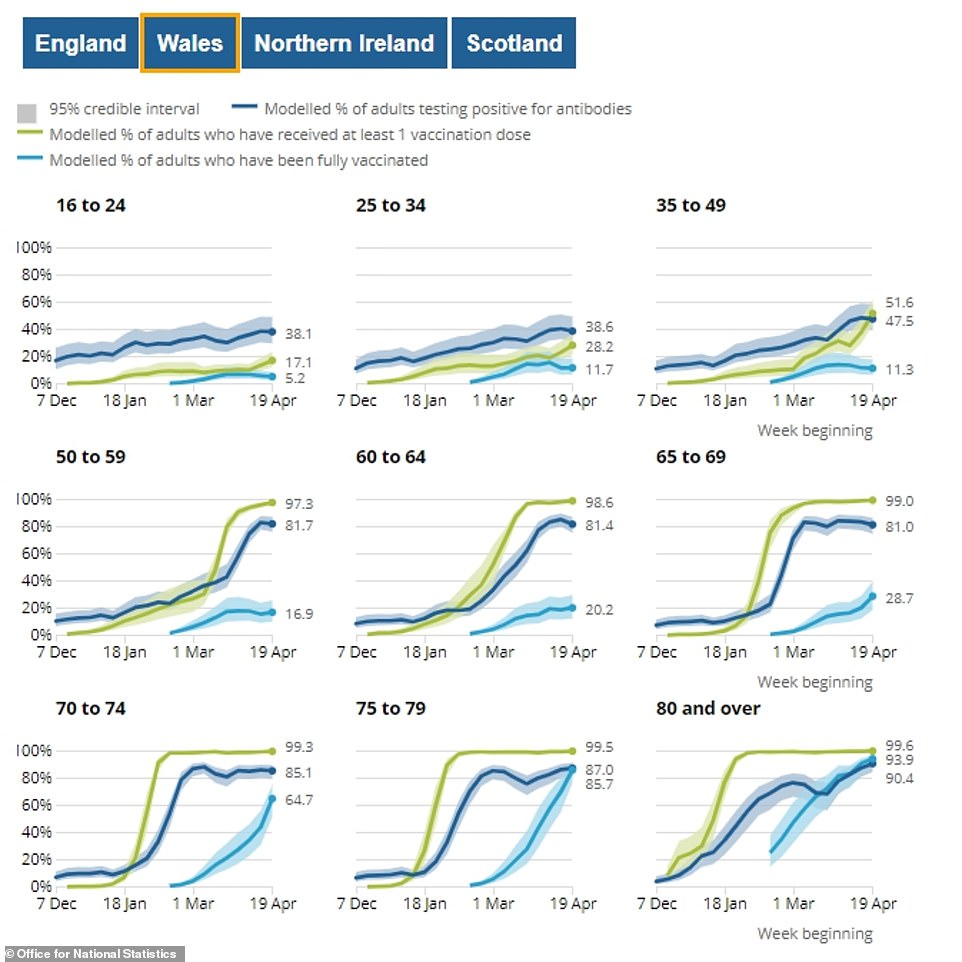 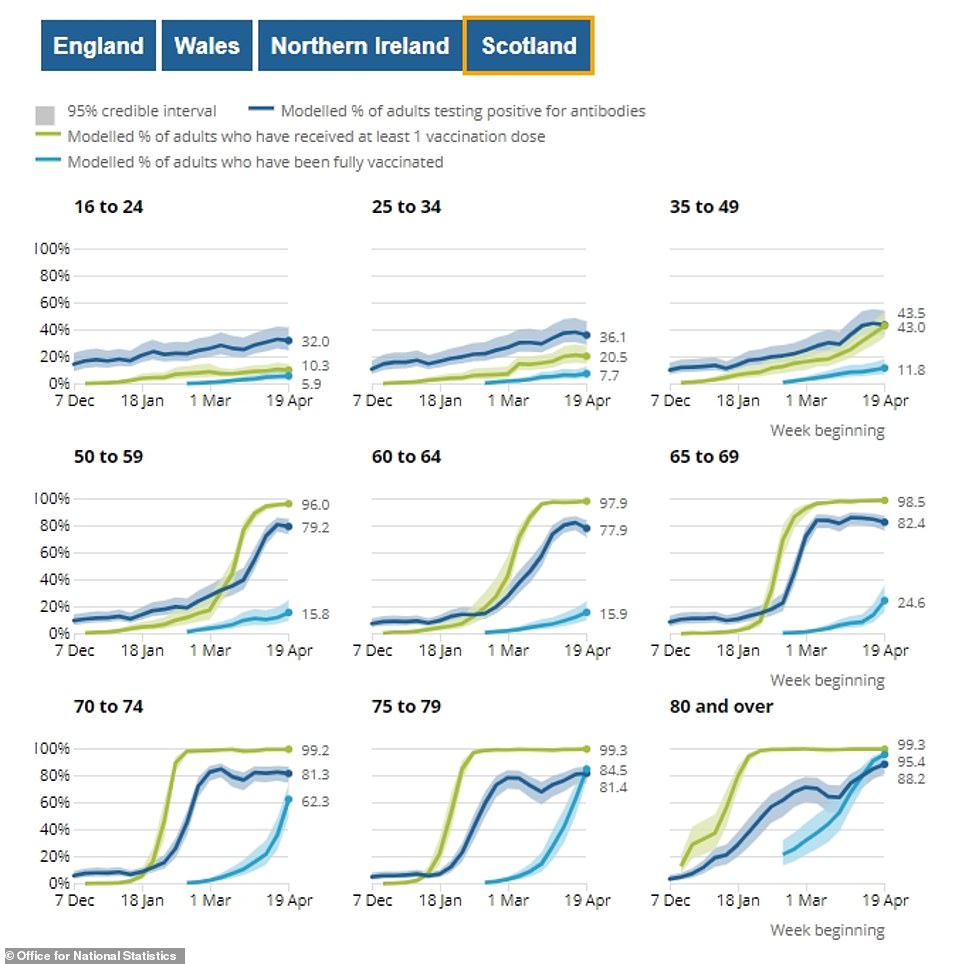 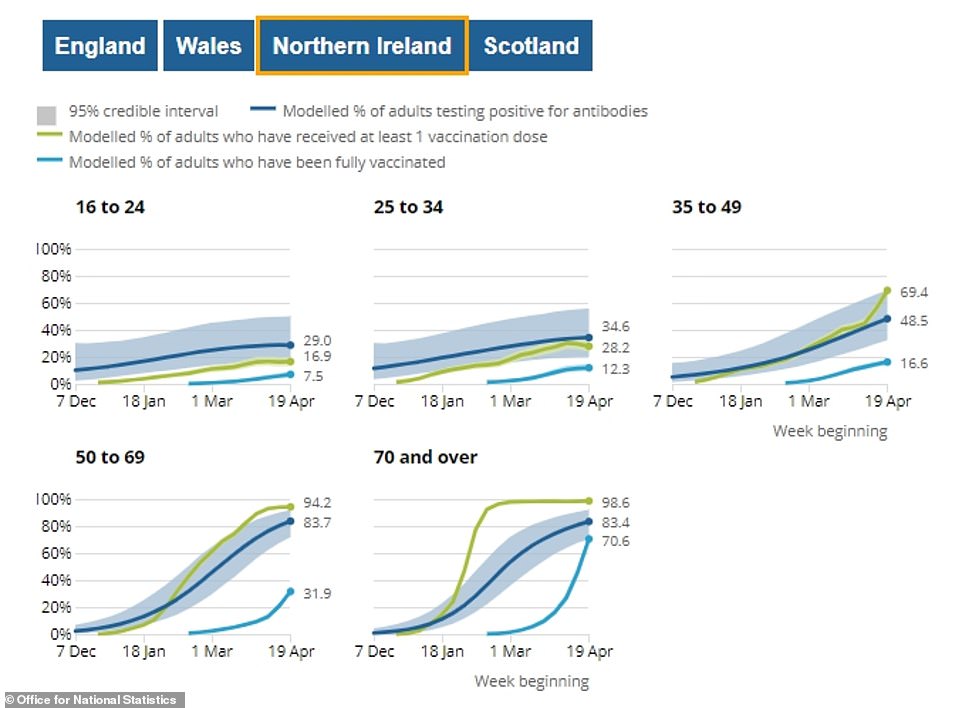