No really, Dr Lowe, we don’t need more of your advice just now

We have to be thankful that Philip Lowe is only the governor of the Reserve Bank of Australia.

You wouldn’t want him to be, say, the principal of Psmith Financial Services Pty Ltd. 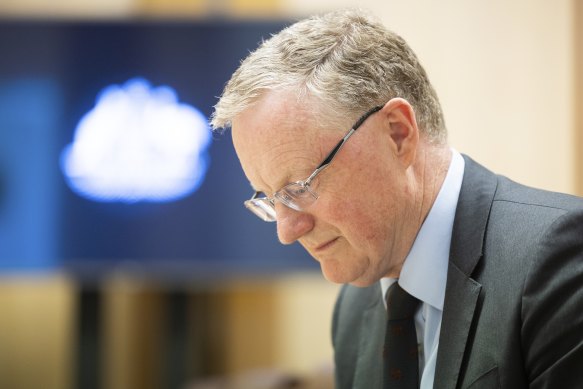 You might have imagined Dr Lowe is worth a very close listen when he looks to the future and sees clear(ish) blue skies.Credit:Alex Ellinghausen

You’d be left counting your fingers if Mr Psmith told you he was dreadfully sorry you listened to him and acted on his advice and ended up worse for wear in the pocket department.

Even the Psmiths of the financial services world are supposed, on the stern order of the Australian Securities and Investments Commission, to do their very best to provide advice on the understanding their clients are likely to listen and act on it.

The good Dr Lowe is not a licensed financial adviser.

He is merely the chap responsible for running the nation’s central bank and advising the government of the day of the bank’s monetary and banking policy.

The purpose of the bank’s major policies, among other heady matters, is to control inflation through efforts such as setting official interest rates, also known as the cash rate.

And yes, there’s a clause about the bank’s responsibility for ensuring the economic prosperity and welfare of the people of Australia.

All of which, you might have imagined, makes Dr Lowe worth a very close listen when he looks to the future and sees clear(ish) blue skies.

Here’s what he said in March 2021, at a business summit hosted by The Australian Financial Review, at a time when the cash rate was approximately bugger all, or more precisely, 0.1 per cent.

“… Our judgement is that we are unlikely to see wages growth consistent with the inflation target before 2024. This is the basis for our assessment that the cash rate is very likely to remain at its current level until at least 2024,” said the governor of the Reserve Bank of Australia.

Unsurprisingly, hordes of borrowers felt this was akin to the most inside of inside knowledge and rushed to put down their hard-earned on mortgages that even at the negligible interest rates of the time would make the cautious weep.

Alas. Dr Lowe’s central bank has since slipped the leash on interest rates month after month.

And what does Dr Lowe have to say about this unfortunate turn of events?

“I’m sorry that people listened to what we’d said and acted on that, and now find themselves in a position they don’t want to be in. At the time we thought it was the right thing to do,” he expanded.

Dr Lowe of the Reserve Bank of Australia, however, could put it rather a lot better if he’d added the following codicil.

“In the interests of the Reserve Bank’s responsibility to ensure the economic prosperity and welfare of the people of Australia, I hereby tender my resignation.” Preferably before, say, 2024.