No, the Capitol riots are not like the BLM protests, say activists

Washington: Black activists are coming out strongly against a growing narrative among conservatives that equates the deadly siege on the US Capitol with last year's Black Lives Matter protests of racial injustice.

Republican Congress members defending President Donald Trump made the comparison again on Thursday (AEDT) while building their case against impeachment and accused Democrats of being hypocrites with selective outrage. Their comments mark the latest effort by Trump and the Republican Party to misrepresent the Black Lives Matter movement as an extremist, violent faction tied to anarchists. 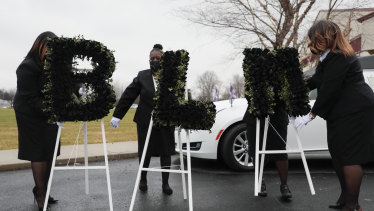 Church staff arrange flowers that speak out “BLM” before the casket of Andre Hill is brought to a hearse following his funeral in Columbos, Ohio. The 47-year-old black man, was shot and killed by a police officer in December.Credit:The Columbus Dispatch/AP

“You can moan and groan, but he was far more explicit about his calls for peace than some of the BLM and left-wing rioters were this summer when we saw violence sweep across this nation,” Florida Republican Matt Gaetz of Florida said in defending Trump before the House voted 232-197 to impeach the President for inciting an insurrection.

But the two events were fundamentally different. One was an intentional, direct attack on a hallowed democratic institution, with the goal of overturning a fair and free election. The other was a coast-to-coast protest movement demanding an end to systemic racism that occasionally, but not frequently, turned violent.

Many BLM protesters were responding to the death of George Floyd, a handcuffed black man who was seen on video gasping for breath as a Minneapolis police officer pressed his knee into Floyd’s neck. Police repelled the demonstrators using rubber bullets, tear gas and military assets like helicopters. 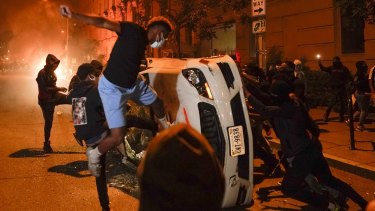 Demonstrators protest the death of George Floyd near the White House in Washington in May. Credit:AP

The mob at the Capitol was fulled by baseless conspiracies propagated by Trump that the election was stolen from him through massive fraud. The rioters acted on the President’s direct urging to “fight like hell”. They attacked police with pipes and chemicals and planted bombs. They were met largely with restraint by law enforcement.

The unrest that followed Floyd's death included vandalism, arson and looting, but the vast majority of demonstrations were peaceful. Some of the worst violence was in Portland, where thousands of protesters turned out nightly for weeks. Some hurled fireworks, rocks, ball bearings and bottles at federal agents, and a member of a right-wing extremist group was gunned down by an antifa supporter.

But prominent BLM activists repeatedly distanced themselves from provocateurs and brawlers. Much of the violence came from provoked and unprovoked confrontations with police, during city-imposed curfews and after peaceful demonstrators had gone home. An analysis of more than 7750 demonstrations in 2400 locations across the country found that 93 per cent happened with no violence, according to the US Crisis Monitor, a joint effort by Princeton University and the Armed Conflict Location & Event Data Project.

The mob at the Capitol smashed its way into the heart of the federal government, seeking to interrupt constitutionally mandated proceedings to affirm President-elect Joe Biden’s victory. Congress members fled into hiding, and five people were killed, including a Capitol police officer who was hit in the head with a fire extinguisher. 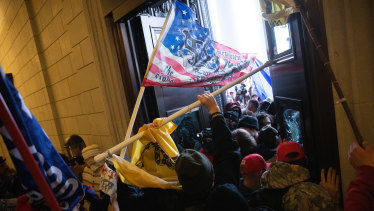 The “overwhelmingly non-violent” demonstrations cannot be compared to the violence at the Capitol, "where white supremacists, mobilised by falsehoods peddled by President Trump and his GOP allies” laid siege to the Capitol “resulting in its desecration,” Jones said.

Trump has made no effort to apologise for remarks that egged on the insurrection. Instead he said on Tuesday: "And if you look at what other people have said, politicians at a high level, about the riots during the summer, the horrible riots in Portland and Seattle and various other places, that was a real problem — what they said.”

Freshman Republican Congresswoman Marjorie Taylor Greene of Georgia said Democrats should be removed for inciting violence by supporting the protests that followed Floyd's death in May.

Trump "has held over 600 rallies in the last four years. None of them included assaulting police, destroying businesses or burning down cities,” Greene said. 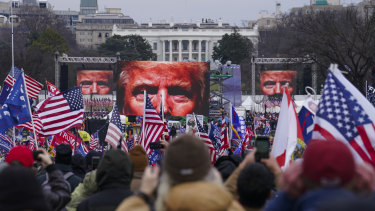 Called by Trump to Washington on January 6, supporters amass near the White House.Credit:AP

In fact, occasional violence has happened at Trump rallies, and the President has all but invited crowds to attack critics and journalists. At several events, Trump supporters and protesters have come to blows, including as recently as November, when clashes between people protesting the election results and counter-demonstrators ended with at least one stabbing and 20 arrests.

Freshman Democratic Representative Sara Jacobs of California said she was disgusted that Republican members used the comparison to avoid condemning a clear attempt “to stop the processes of democracy."

“It’s telling that so many Republicans aren’t even attempting to defend the President — because his actions are indefensible," she said in a statement after voting to impeach Trump.

The President in a tweet following the siege called the Capitol rioters “great patriots who have been badly & unfairly treated for so long.” Over the northern summer, he called the Black Lives Matters protesters “thugs” and “terrorists”.

In 2020, law enforcement agencies made more than 14,000 protest-related arrests, often detaining people who engaged in civil disobedience, as well as acts of violence.

Trump has portrayed people arrested in the protests as dangerous, left-wing radicals. A review by The Associated Press found many were young suburban adults with no previous run-ins with the law or ties to antifa.

An investigation into the response of the Capitol police is underway. One officer was seen taking a selfie with an insurrectionist, and several rioters were escorted from the premises without being handcuffed.

“There is a real danger of this false equivocation leading to ramifications, whether intended or unintended,” he said.

are, Capitol, No, not, Riots, the
You may also like: