North Korean defector Yeonmi Park reveals she was mugged in Chicago but when she restrained her black attacker white onlookers branded her a racist, forced her to let the criminal GO and stopped her calling 911

A woman who defected from North Korea and came to the US says she was mugged by three black women outside a Saks Fifth Avenue store in Chicago last year but was prevented from calling the police by white bystanders because doing so was ‘racist.’

Yeonmi Park, the Columbia University student who along with her mother was sold into slavery by human traffickers after fleeing North Korea when she was just 13, alleges the incident took place during last summer’s looting in the Windy City.

Park alleged that police and prosecutors declined to charge the thief, but public records indicate that 29-year-old Lecretia Harris was sentenced to two years in prison after her arrest in connection with the incident.

One of Harris’ accomplices managed to evade arrest.

At around the time of the incident, the city was in the midst of widespread unrest as vandals smashed windows of dozens of businesses and made off with merchandise, cash machines and anything else they could carry.

Park said that bystanders encouraged Harris to run and were hostile to her when she tried to call the police. Some who witnessed the crime branded her a racist for trying to dial 911, according to Park.

By speaking out about the incident, Park said that she has ‘become the enemy of the woke.’ 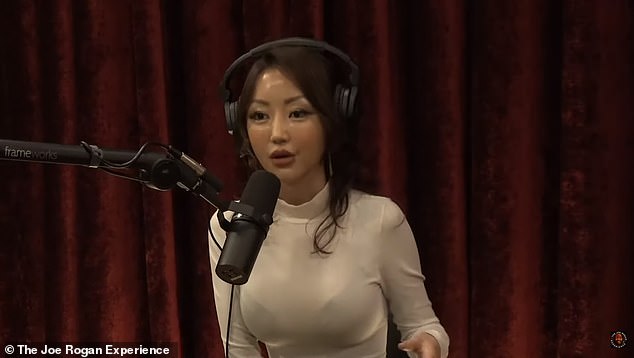 Yeonmi Park, the Columbia University student who along with her mother was sold into slavery by human traffickers after fleeing North Korea when she was just 13, says she was called a racist by bystanders in Chicago last year after she tried to call police after she was mugged by three black women 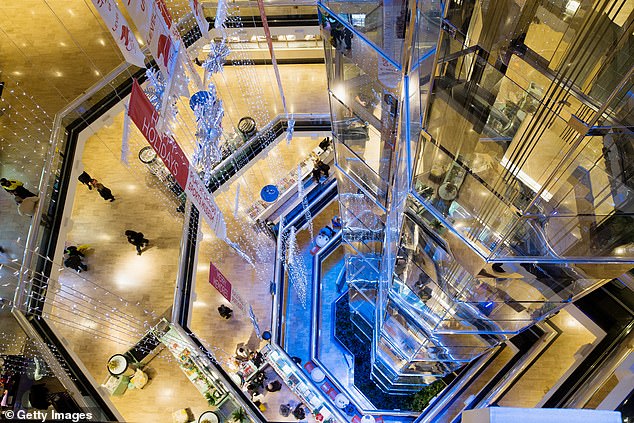 COMMENTS ABOUT THE ROBBERY START NEAR THE 2:00:00 MARK

During an appearance on Joe Rogan’s podcast, Park said that she was accosted by three black women near the Saks Fifth Avenue on Michigan Avenue – right along the city’s famed ‘Magnificent Mile.’

‘Last year, during the looting in Chicago, I was robbed by these three black women,’ Park told Rogan on Tuesday.

‘Anybody can become a murderer or a thief, but it just happened to be a black woman.’

Park said that her nanny, who is a Muslim wearing a hijab, carrying her stroller behind her.

She claims that one of the women robbed her of her wallet. Park said that she then grabbed onto the thief’s arm to prevent her from fleeing and held onto it while attempting to call the police.

According to Park, a group of white bystanders who witnessed the robbery started calling her a racist for seeking to call the police.

‘They were telling me that the color of their skin doesn’t make them a thief,’ Park said.

‘Calling a black person a thief is racist.’

Park alleged that the thief punched her while she held onto her arm.

‘I tried to call the police and they (the bystanders) prevented me from calling the police,’ she said.

When asked who was preventing her from calling the police, Park replied: ‘All the people along Michigan Avenue [who witnessed the incident.]’

‘That’s when I was thinking, “This country lost it”.’

Park said that while holding her arm, she told the thief: ‘I’m not accusing you of anything. Can you wait here until the police come?’

She said that if a similar event happened in North Korea, bystanders there ‘would help the victim.’

‘They’re not going to just, out of nowhere, scream: “You’re a racist”.’

Park claimed that the police obtained video footage of this incident but the authorities declined to prosecute the culprits.

A spokesperson for the Chicago Police Department told DailyMail.com that officers responded to a report of an incident on the 800 block of North Michigan Avenue at around 4:12pm on August 14, 2020. 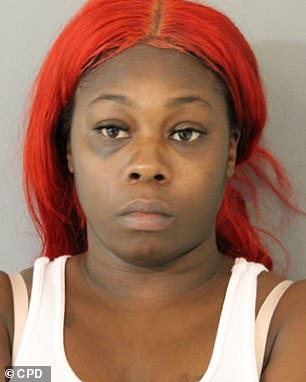 Lecretia Harris, 29, was sentenced to two years in prison after her arrest in connection with the incident

‘The victim, a 26-year-old female, related she was at the above location when two female offenders approached,’ according to the police.

‘The offenders struck the victim and took personal property from her before fleeing northbound on foot.

The spokesperson added: ‘According to the report, officers were called to the scene and responded by 4:15pm.

‘One of the offenders was placed into custody on August 21, 2020 and charged accordingly.’

The suspect was identified as Harris. She was charged with a felony count of robbery.

In January, Harris, who has several prior convictions including aggravated battery, pleaded guilty to a charge of unlawful restraint. In exchange, she was given a two-year prison sentence.

As part of the plea agreement, prosecutors dropped the robbery count.

Police and prosecutors also said there were two perpetrators rather than three and that one of them was a man.

DailyMail.com has reached out to Park seeking to clear up the discrepancy.

Police then used the information from that transaction to track down Harris. 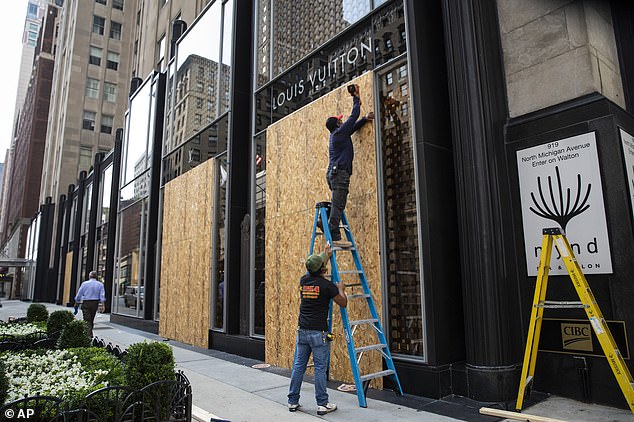 At around the time of the incident, the city was in the midst of widespread unrest as vandals smashed windows of dozens of businesses and made off with merchandise, cash machines and anything else they could carry. Staff board up Louis Vuitton on Magnificent Mile in Chicago on August 10

Prosecutors said that Harris and another man approached Park, who was walking with her nanny and her baby just outside the Water Tower Place mall on Michigan Avenue in Chicago.

Harris and the man approached Park and the nanny and had an ‘interaction,’ according to authorities.

That’s when Park noticed her wallet was missing from her purse, which was unbuttoned.

Park then ran and caught up with Harris and the man in an attempt to stop them.

She then pulled out her phone and called the police.

At that point, the man punched Park in the chest while Harris knocked the phone out of her hand and threw it on the sidewalk, according to prosecutors.

Park is then said to have retrieved her phone and started recording Harris and the man. She then went into a nearby store and called 911.

Investigators tracked down Harris. Park then identified her in a police lineup. 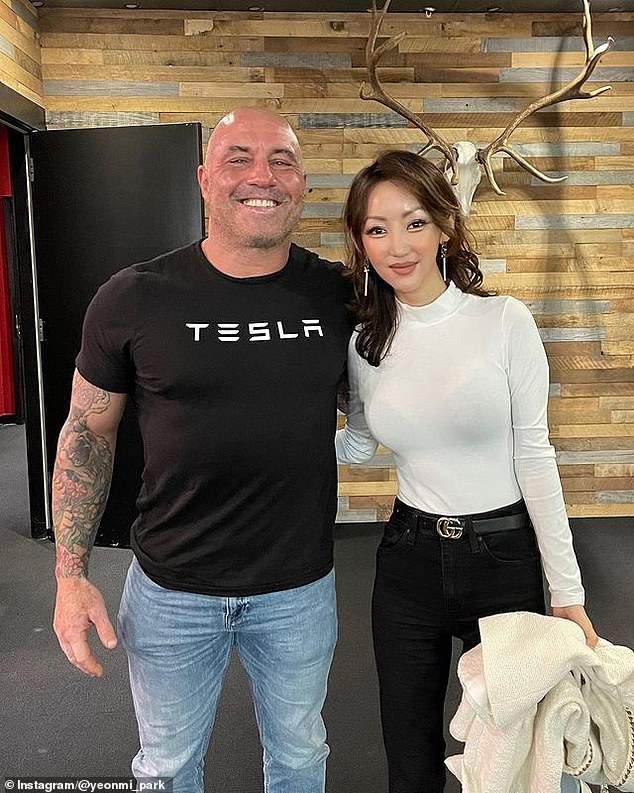 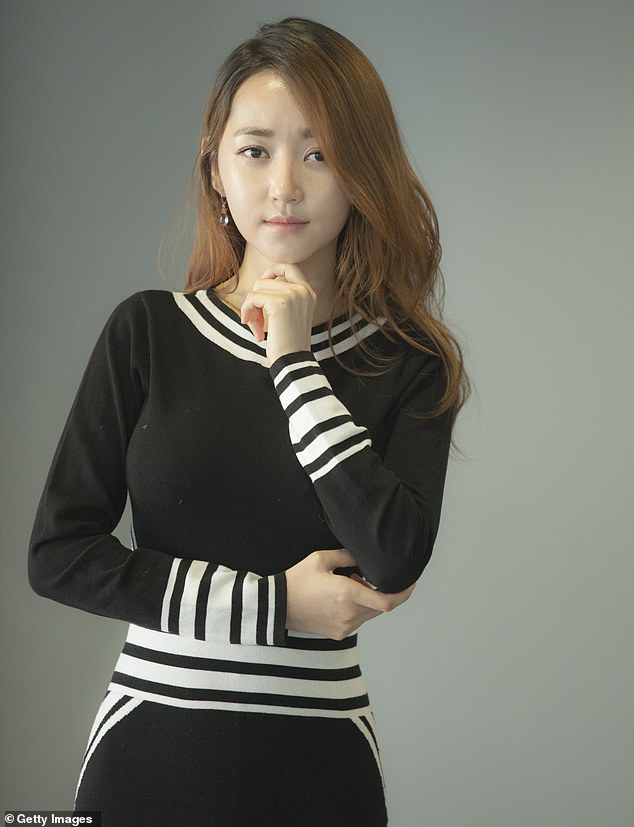 Park fled North Korea as a teenager and was sold into slavery when she and her mother entered China. They were ultimately rescued by Christian missionaries who helped them escape to Mongolia, where they crossed the Gobi Desert into South Korea 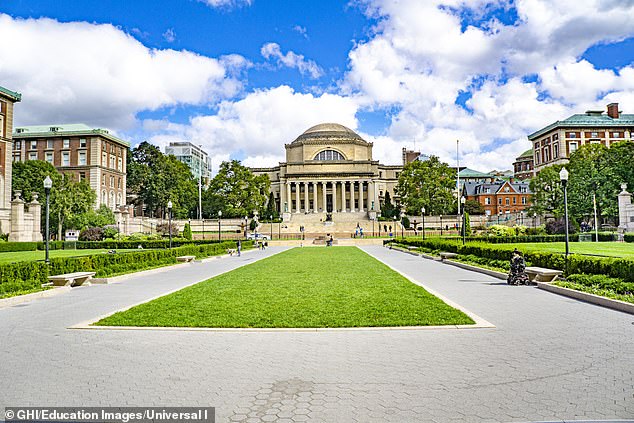 She started attending Columbia University, pictured, in 2016 and said she thought she was going to learn how to think critically but was instead ‘forced to think’ a certain way

DailyMail.com has also filed a Freedom of Information Act request to obtain video footage of the incident.

Park is an author and has spoken out about ‘woke’ culture of ‘censorship’ in the United States, saying that it reminds her of North Korea.

She told Rogan that at Columbia University, she was told by a humanities professor that a man holding the door for a woman was an example of ‘toxic masculinity’ since men are ‘overpowering’ women when making the gesture. 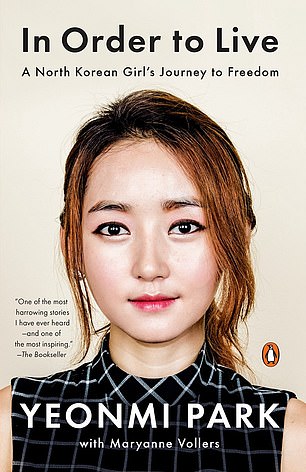 Park is the author of a memoir titled In Order to Live: A North Korean Girl’s Journey to Freedom

Park said that when she objected to that characterization and thought it was an act of ‘decency,’ she was told she was ‘brainwashed.’

‘Here, in the name of a space space, you can’t have anything other than the mainstream view,’ she said of her time at Columbia.

Park said that students who attend colleges and universities in the US are being indoctrinated with ‘anti-racist’ ideology.

She said that the concept of ‘white privilege’ and ‘white guilt’ was ‘so new to me.’

‘How are you guilty for what your ancestors did?’ Park asked.

‘You didn’t choose to be born as white. I don’t choose my birthplace.’

Park said that she was told by tech executives that they would never set foot in Texas because it’s ‘Trump Country.’

Park and her mother fled North Korea to China over the frozen Yalu River in 2007, when she was just 13, and the two were sold into slavery by human traffickers.

They were ultimately able to flee to Mongolia with the help of Christian missionaries and trekked across the Gobi Desert to eventually find refuge in South Korea, where Park, now 27, attended college before transferring to Columbia in 2016.

‘I literally crossed the Gobi Desert to be free and I realized I’m not free, America’s not free,’ she said.

‘I expected that I was paying this fortune, all this time and energy to learn how to think,’ she told FOX News in June.

‘I realized, “Wow, this is insane”,’ she recounted, ‘I thought America was different but I saw so many similarities to what I saw in North Korea that I started worrying.’ 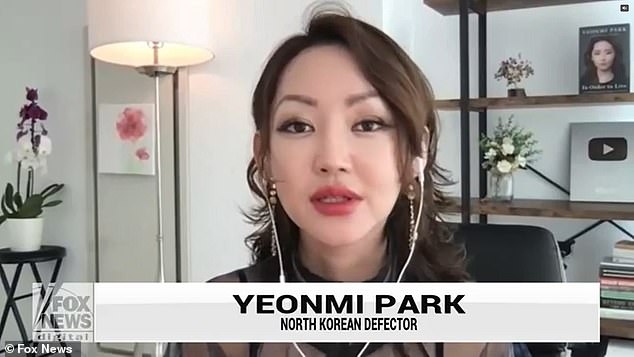 In an interview with FOX News in June, Yeonmi Park said she saw similarities between her homeland of North Korea and American educational institutions

Park said that her professors would give them ‘trigger warnings’ and allow them to opt out of readings and discussions.

‘Going to Columbia, the first thing I learned was ‘safe space,” she told the New York Post.

She explained that when she started school at Columbia, she was excited to learn more about history, a subject she said was discouraged in her homeland.

But when her teacher, discussing Western Civilization, asked if students had an issue with the name of the class topic, most did, saying there was a ‘colonial’ slant.

‘Every problem, they explained us, is because of white men,’ she said, reminding her of her home country where people were categorized based on their ancestors, according to the Post.

During her orientation, a professor asked who the class who liked classical books, like Jane Austen.

‘I said, ‘I love those books,’ Park said in an interview with FOX News. ‘I thought it was a good thing.’

‘Then she said, ‘Did you know those writers had a colonial mindset? They were racists and bigots and are subconsciously brainwashing you.’

From there, she said, her classes were filled with ‘anti-American sentiment, reminding her of her childhood in North Korea, where students were constantly taught about the ‘American bastard,’ which was the only way they were allowed to refer to Americans.